Today we are formally announcing a series of tutorial videos that will help explain how to install and play Forgotten Hope 2 for new players and veterans alike.

Today we have a few videos and a rifle render to show off.

We start with the announcement of a series of tutorial videos that will cover the basics of getting started with Forgotten Hope 2. Made by Slayer, these are mainly aimed at the brand new player, but perhaps you are returning after a long break and need to brush up on your skills or just want to see if there is anything you've missed. You can find the first 3 videos here: 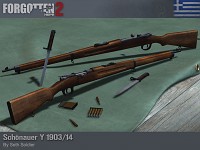 Following the adoption of his rifles by the Austro-Hungarians in 1886, Ferdinand Mannlicher began to market to other countries. The Romanians and Dutch were notable adopters of this system in a slightly modified form, but there were also more novel adaptations. One such was the use of a rotary spool magazine originally designed by Anton Spitalsky and further improved by Josef Schulhof. Offered in 1900, this rifle was adopted by the Greek Army to replace their ageing Gras rifles.

Adopted in 1905, there was both a rifle and a carbine version. The first rifles were made by OEWG Steyr, and arrived in 1906. They would see use in the Balkan Wars, World War 1 and the Greco-Turkish War. The model of 1914 added an upper handguard among a few other more minor changes. Ours was made by Seth Soldier.