Big changes are coming to Robocraft this week, including an improved Power Booster renamed to the Weapon Energy module with all new benefits!

With this week’s game-changing and very exciting ‘Fast and Formidable’ expansion, which you can read more about here, we will be re-branding the Power Booster from what it is currently into the ‘Weapon Energy Module’. With this post we want to give you a clear indication as to the changes coming this week.

Currently, the Power Booster converts CPU into additional power giving the player a boosted 25% power regeneration rate. However, this wouldn’t work as efficiently with the new ‘CPU vs. Weapon Energy’ changes coming this week. So, we went back to the drawing board and opted to change the Power Booster from a passive (always-on) device into an active ‘Weapon Energy Module’ that is assigned a loadout slot and activated when needed.

The ‘Weapon Energy Module’ stats/cost/rarity will remain the same, however it will now be subject to a 60 second cooldown. Depending on player and internal testing feedback, the cooldown rate may change. 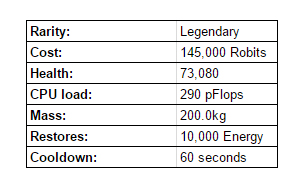 We’ll wrap up all of the changes coming in the Fast and Formidable expansion in the preview patch notes coming later this week.