Voxel Turf isn't just an open world/city building game. Its also has Grand Strategy. In today's Dev Diary we delve into Turf Wars, diplomacy and how the AI behaves.

Your city is divided up by various factions. These factions have bases around the city, and nearby buildings will be protection racketeered, giving them a source of income. One way to grow your wealth and influence in the city is to conquer these factions through warfare and diplomacy to gain control of their protection rackets.

Be sure to subscribe to my Youtube channel for more vids!
If this game looks interesting to you, consider giving it a Watch, or adding it to your Steam Wishlist

Above: Two AI factions are at war. One group is trying to take over the base (the building).
Filmed from a helicopter.

If you've played any Grand Strategy game before this should be mostly intuitive to you. For the uninitiated, things work as follows:

Let's have a look at these in more detail. 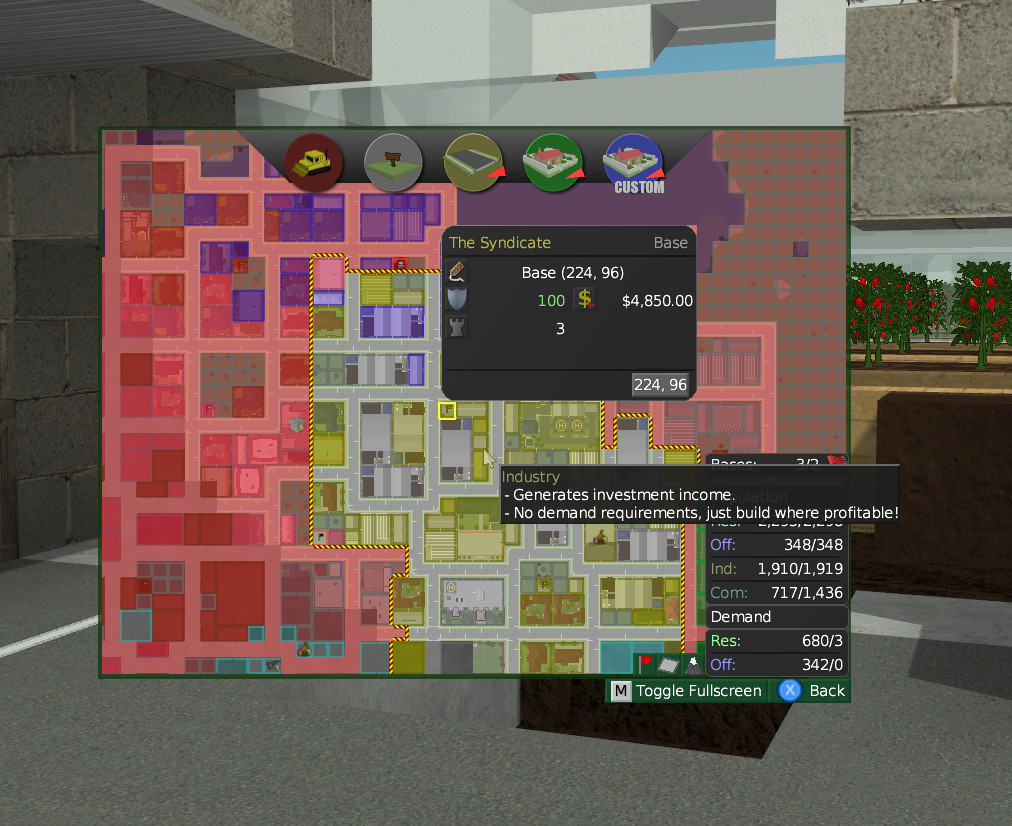 Above: A base is highlighted. Bases give the ability to racketeer nearby buildings for money. You must capture these in a Turf War while defending your own from attack 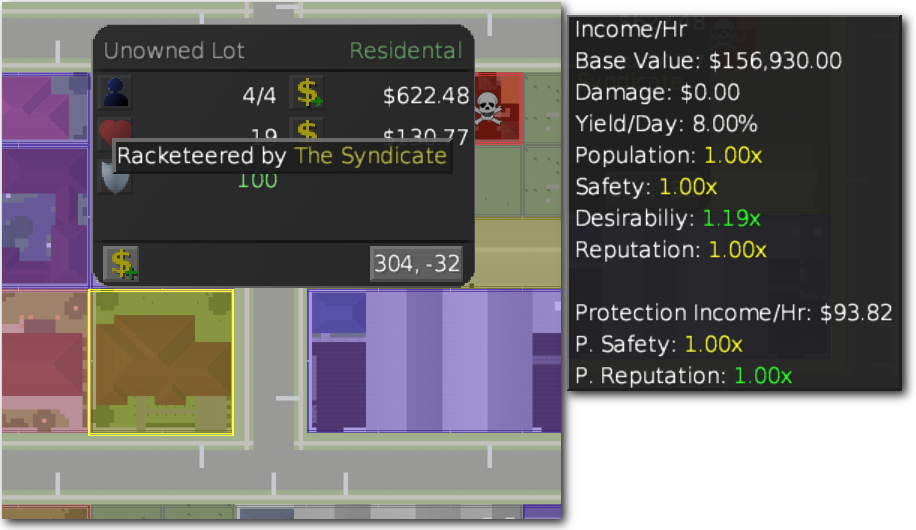 Above: A racketeered building. Racketeering only gives part of the buildings income, but none of the expenses. When a bases is ceded in a turf war, all racketeered lots attached to it are transferred with it

Open players/factions page, then open the Diplomacy screen. Here you can do several diplomatic options and engage in private chat. But we'll discuss these later. 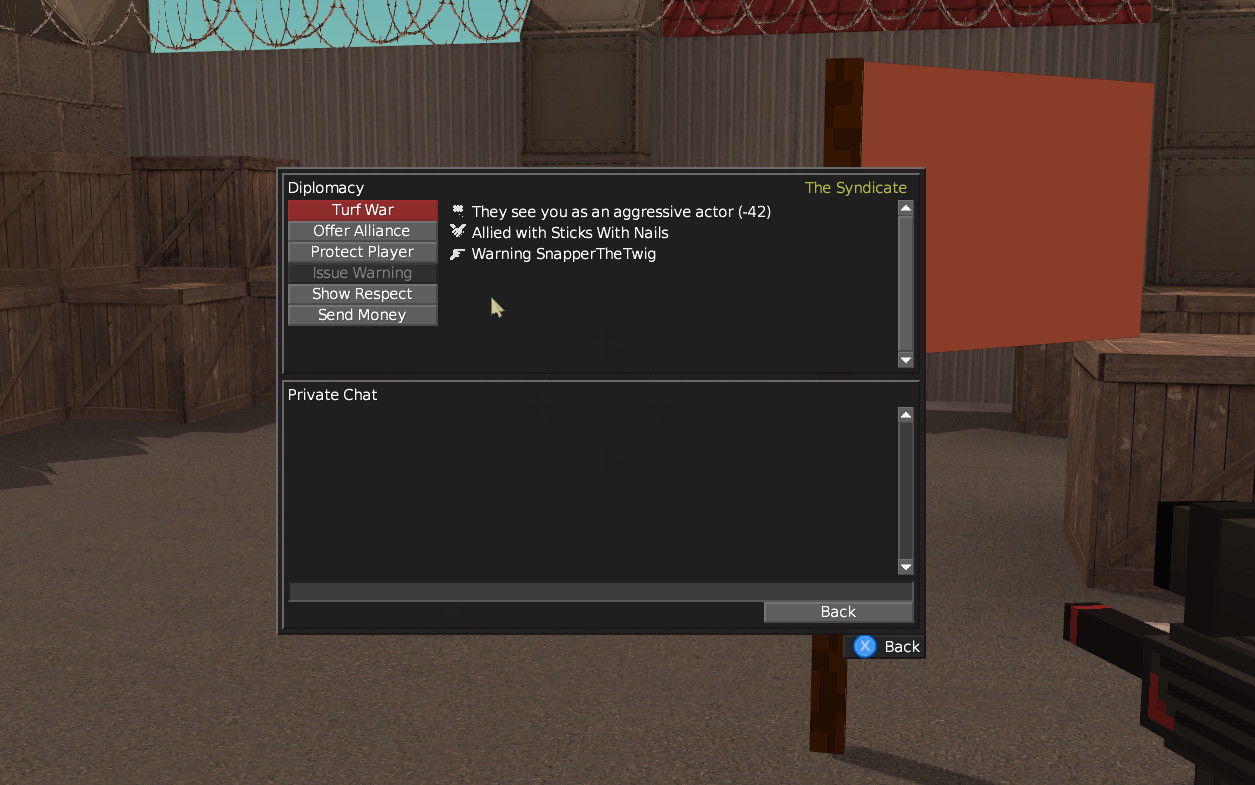 Hitting the Turf War button will bring up a list of players and factions on each side. Your allies will appear on your side, your target's allies on theirs. If someone is allied to both sides they will side with the defender. 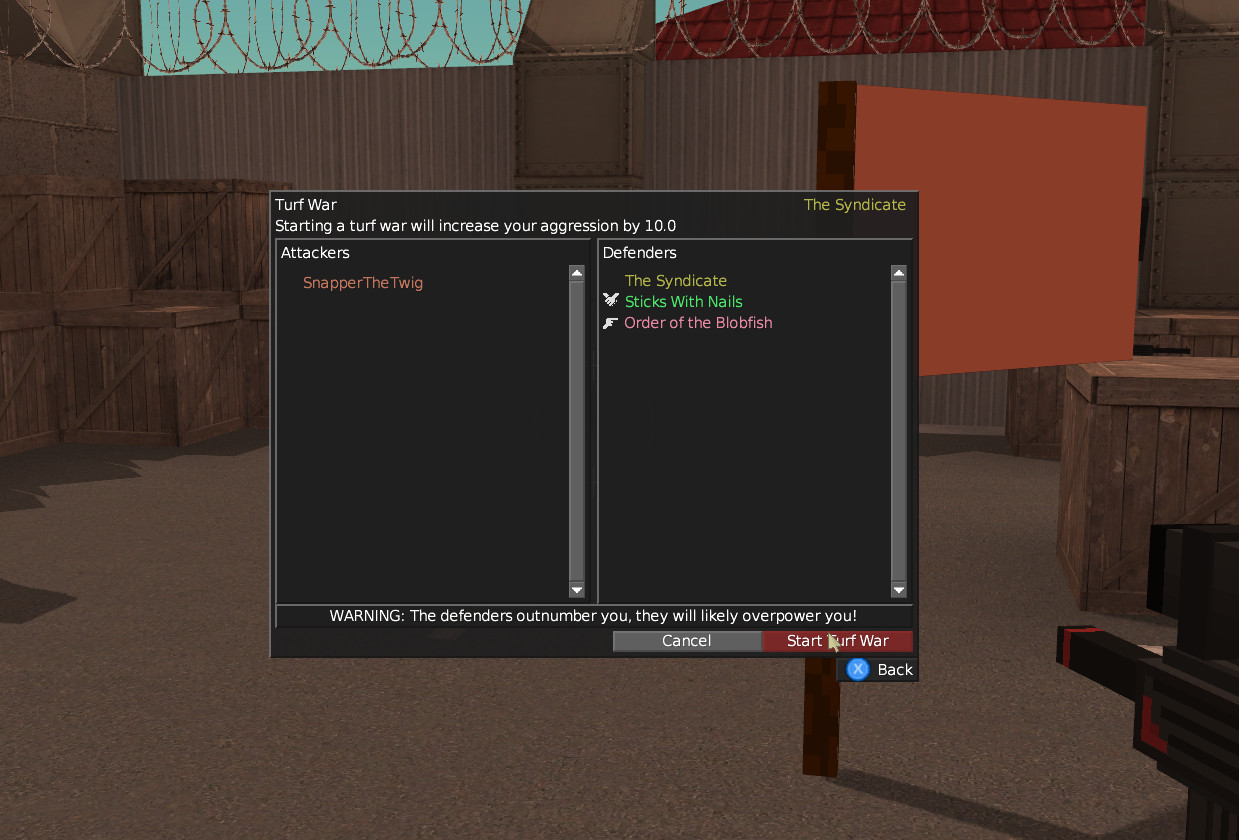 Step 2: Occupy their Bases, while Keeping Yours Safe

This is the fun bit ;). Attack their bases by eliminating the defenders and holding them. Keeping your bases safe takes three parts. Firstly you can build your base to make it a defensible as possible. Secondly you can fortify your base with hired goons. Thirdly, if you are attacking the AI, you have to watch out for Base Attacks...

Watch out, the AI does have a way to fight back! The AI can issue Base Attacks. A Base Attack consists of waves of enemies that invade a targeted base. Base Attacks come in different power levels that dictate the strength and numbers of attackers.

They begin with a scouting wave consisting of one attacker with an SMG and one with a Rocket Launcher. Then they launch assault waves, wielding Assault Rifles and yet more Rocket Launchers. High level base attacks even have "Demolition Waves" - waves that consist of nothing but Rocket Launchers!

Above: Rushing back home to defend a base! This is part of a 3v3 war which can turn hectic!

All waves have at least one attacker equipped with a rocket launcher to demolish obstructions between them and their target. Base attacks do cost the AI money, so economic harassment tactics do work against them. Likewise stalling the AI can work to drain them of money. Finally, the AI does get war-exhausted, making them more willing to accept peace offers as the war progresses.

When you have captured the bases you want you can go back to the diplomacy screen and ask for peace. This brings up a screen where you can make a list of demands (or concessions if things go badly). When you are done you submit the peace proposal which is sent to all players in the turf war. 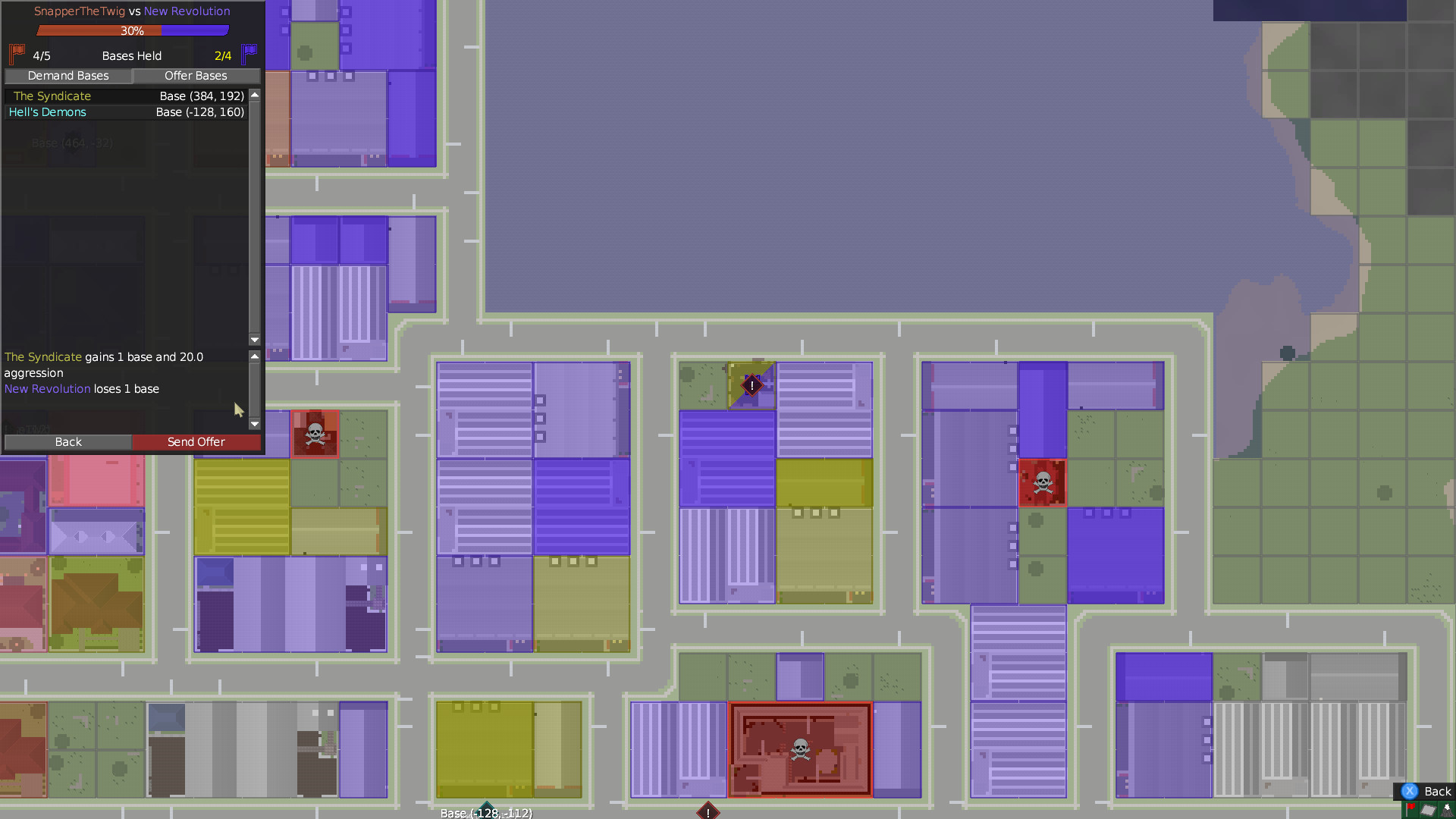 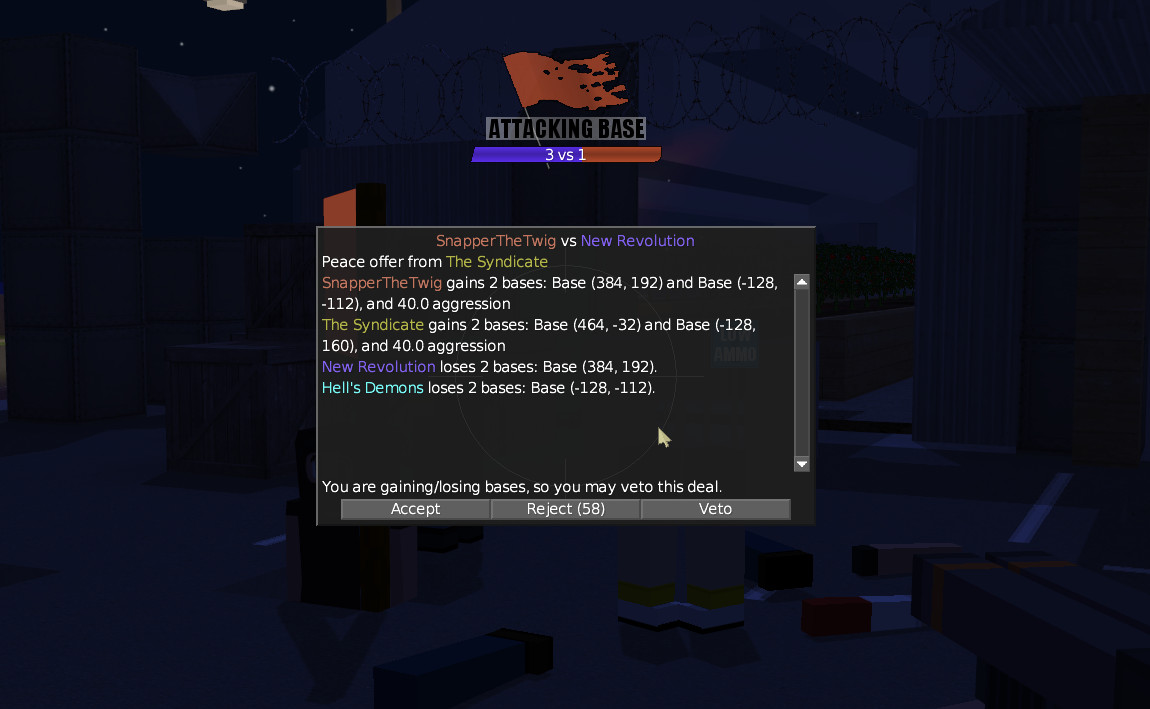 Above: The AI will also make peace offers.

All players get an opportunity to vote on the peace proposal. If both the attacker and defender sides vote . There are some caveats though:

Aggression is the stick to the warfare carrot. Starting Turf Wars and conquering territory will increase your aggression stat. Aggression: 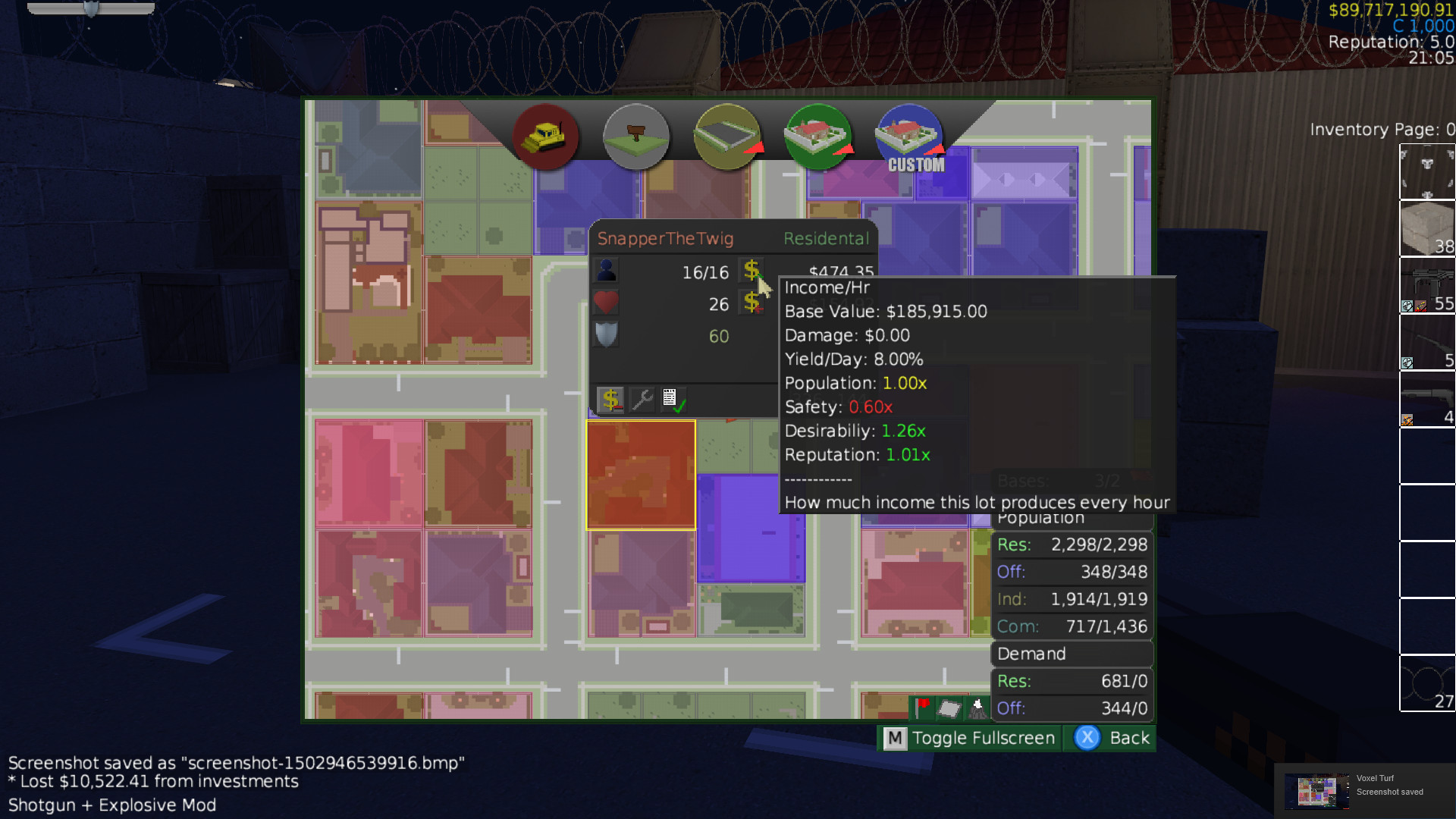 Above: Aggression will reduce the safety rating of lots you own, reducing the income.
Wars have a lasting effect on your economy.

Voxel Turf has some diplomatic depth to it. You can spend reputation (a reward for completing missions, killing bandits and making/placing buildings) to make the AI like you. Make them like you enough and you can ally them, and drag them into conflicts against your foes!

You also have the ability to “warn” and “protect” other players/factions. What do these mean? Well, lets say you warn a player/faction. Then if that player/faction attacks ANY other player/faction you will be called into the war on the defender's side. The AI will issue warnings to players with negative opinion and more than 5 aggression. The total amount of warnings a player will receive from the AI is dependent on the amount of aggression a player has – for instance if you have lots of aggression you'll get lots of warnings, but if you only have a little bit you'll only get 1 or 2. You can use warnings to “box in” other players.

Finally there is the ability to protect a player/faction. This means if they are attacked, you will automatically join them on the defensive. You can use this to protect weaker players (or perhaps your noobish friends) against aggression without committing to a full alliance. 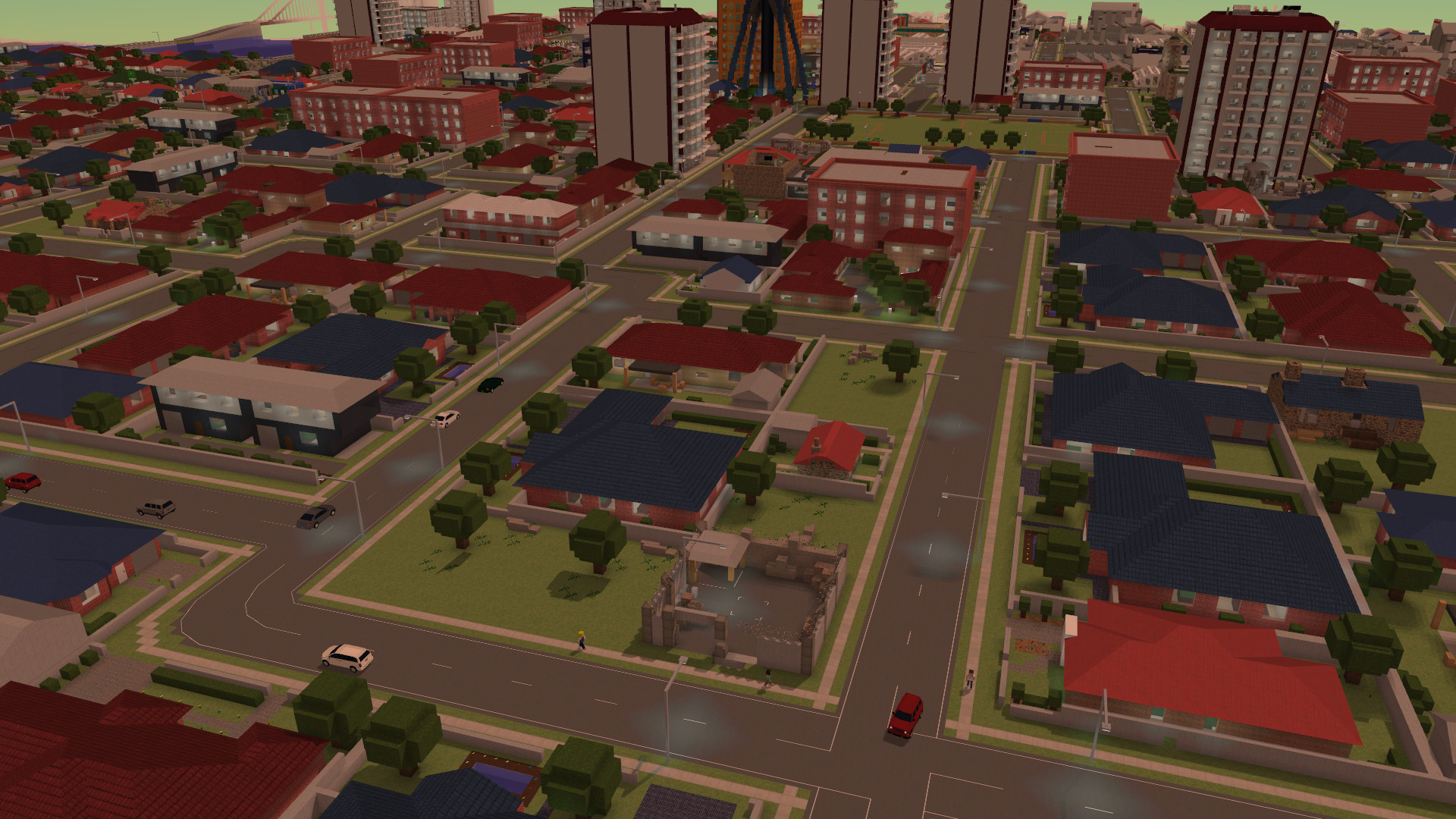 Above: With some cunning planning, this can be yours!