Jump into instant chaotic destruction as a legendary Space Marine. Pick your weapons and do untold damage as you run and gun through screaming hordes of ruthless enemies in this fast-moving action Side-Scroller for android.

Within the 40K universe, Space Marines are walking tanks. If you are being invaded by hundreds of Orks, all you need is one of the Emperor’s finest to hold back the storm.This is exactly the feeling Warhammer 40,000: Carnage attempts to deliver. Rather than commanding a squad. you take control of a single Ultramarine ploughing through waves of Orks. Armed with only a bolt pistol and a combat knife you set out to find Captain Tychaeus, a space marine champion that has fallen in battle. 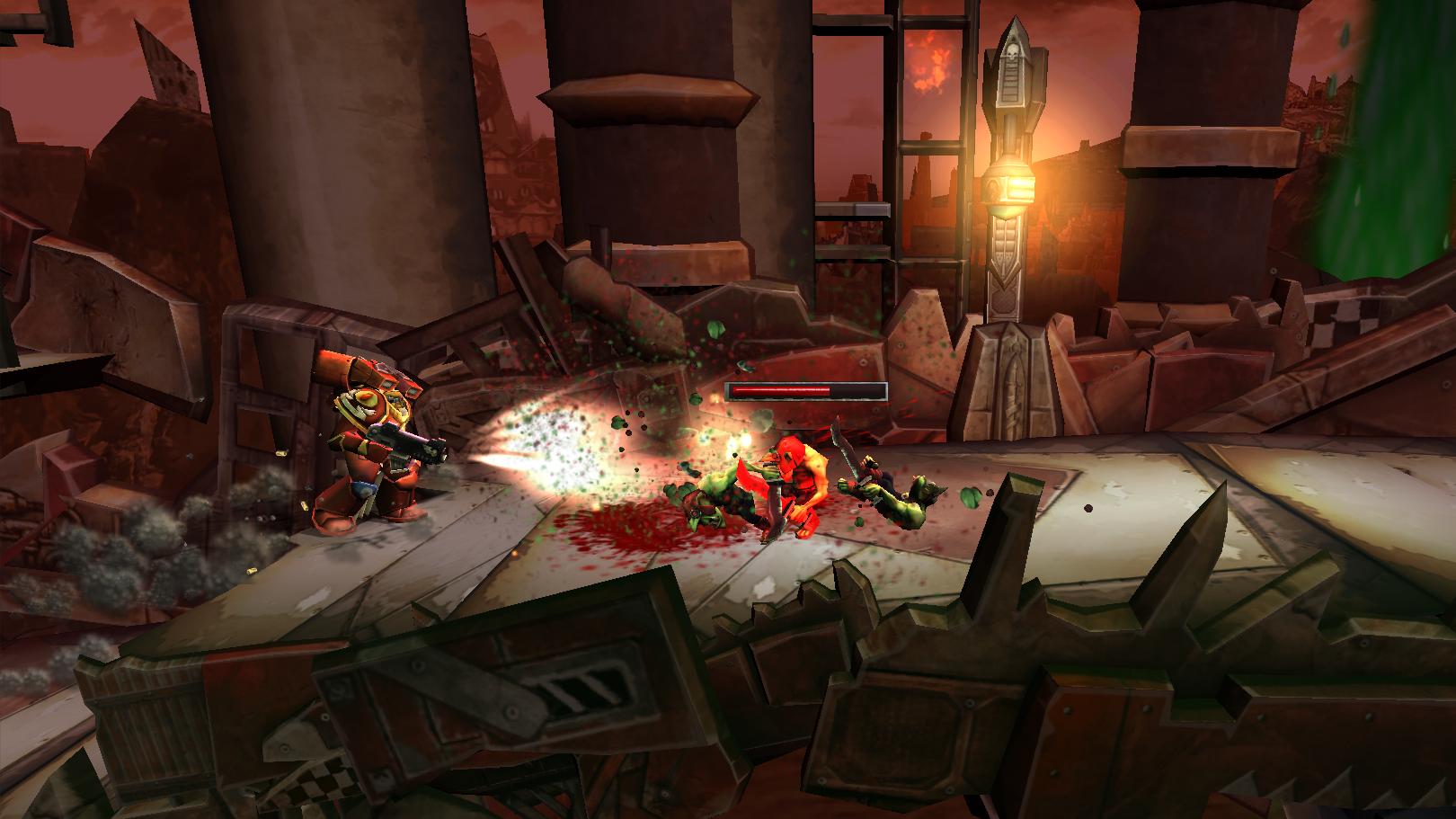 Rather than reference the tactical, turn-based combat of the tabletop game, Carnage echoes classic arcade shooters like Contra and Metal Slug. Similarities go right down to forced scrolling levels that make you run from huge mechanical bosses. But, while Carnage has clearly looked to the past for inspiration, it is missing the pinpoint precision and level design that made these arcade titles classic. 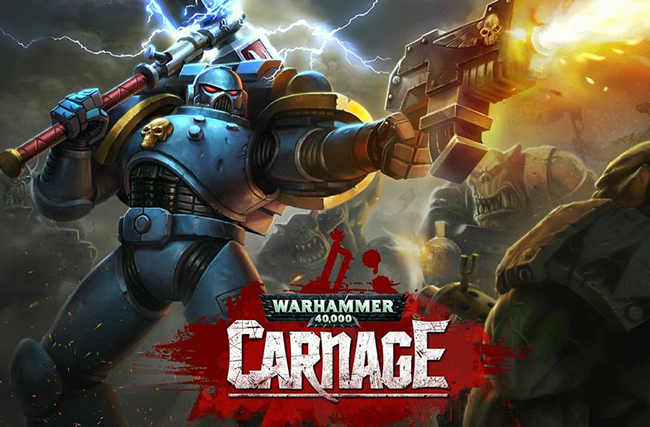 Repetitive enemy distribution and patterns have the unfortunate effect of making even new levels feel familiar. This becomes odd as the stages progress and these same enemies become inexplicably more powerful. The increase in power is annoyingly arbitrary, but does at least provide a reason for you to choose your upgrades with care.

Guiding your armour-clad hero across the war-torn landscape is fairly simple, with directional arrows and virtual buttons doing an adequate job of relaying commands. You may confuse the attack, jump, and fire buttons at the start, and things get a little busy when you unlock the grenade button, but it's all perfectly manageable. 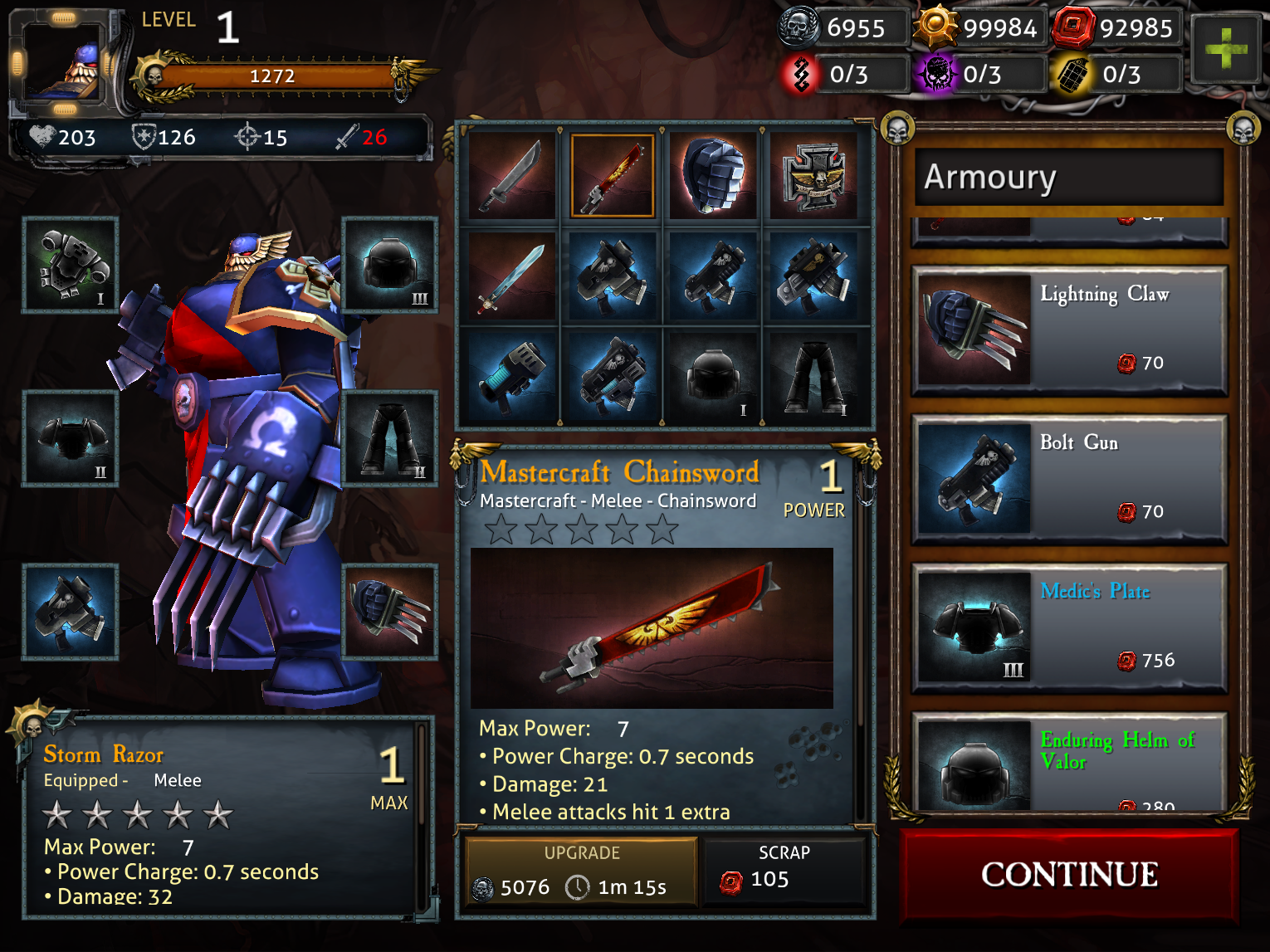 The ability to equip your Marine is a fantastic addition that really helps to invest you in the game. There are six different equipment slots, all with the ability to change your character’s appearance and abilities. For example, if you alter your melee weapons from lightning-claw to chainsword, you will change your character's look, moves, and the effect of his attacks. This personalisation give you a real sense sense of ownership, and will encourage you to push forward in order to strap on the next upgrade.

Warhammer 40,000: Carnage is not a perfect side-scrolling shooter. However, the pleasure that comes from upgrading your warrior's armoury makes it far more enjoyable than it could have been.

Also updates are released like this Dark Angel update = Cdn.fansided.com