We dive into the Warefare card set within Labyrinth.

Posted by freerangegames on Dec 9th, 2016

Introducing select “rarer-than-Common” cards for Heroes who practice the Warfare Discipline of magic: Korghan Twice-Born and Marrik, the Bastion. 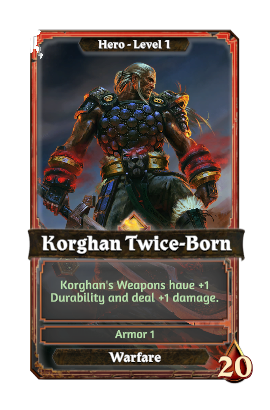 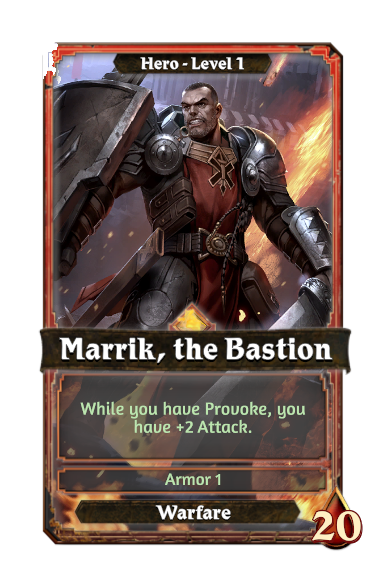 The two Warfare Heroes can use the same cards in their decks (with the exception of a few cards specific to each Hero that are unlocked during leveling up), but have slightly different play styles. Korghan Twice-Born is better at dealing damage due to his superior use of Weapons--that is, Equipment with multiple uses and can be as powerful as an Attack card without needing cards in his hand. This allows him to more consistently put a hurt on enemies. But Marrik, the Bastion, has one more Armor than Korghan and is better with Provoke, which forces enemies to attack him. This makes him superior as a tank at drawing attacks away from the other Heroes and withstanding them. 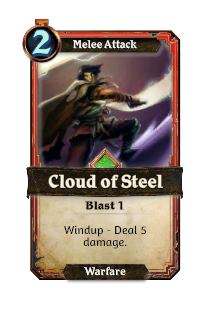 Cloud of Steel is a Rare Warfare Attack card that’s best used when surrounded by enemies with melee attacks that won’t run away. Because it has a Windup, its effects won’t happen until after the 2 Tick cost and it can be canceled during that time by certain cards played by the Boss. But if you’re fairly sure the enemies are going to stay put for 2 Ticks, this card will deal solid damage to each adjacent enemy, enough to kill most non-Lair Minions summoned by the Boss during battle. 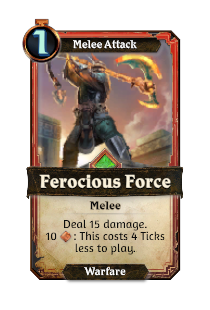 Ferocious Force is a Rare Warfare Attack card that makes use of the Warfare resource, Fury. When you really need to kill off an enemy, it’s sometimes worth it to spend 5 Ticks to deal 8 damage. But if you’ve gained 10 Fury from getting hit by enemies before your turn, spending it to deal that same 8 damage in 1 Tick is much, much better. 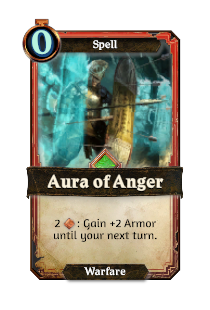 Aura of Anger is a Rare Warfare Spell card that allows the Hero to spend a small amount of Fury in order to give themselves an instant 0 Tick cost increase to Armor. This allows them to set up a big attack with a high Tick cost, knowing Aura of Anger will protect them until their next turn. 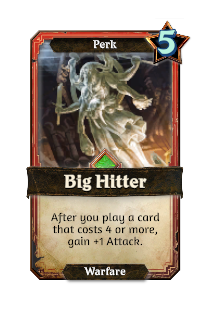 Big Hitter is a Rare Warfare Perk card, automatically equipped at the start of battle. This Perk encourages the Hero to have several high Tick cost Attack cards in their deck by giving them a bonus to their Attack power for the rest of the battle each time they do. As the bonuses stack with each successive powerful Attack card, the cost of their high Tick costs is mitigated by the commensurate increase to damage resulting in higher efficiency over time. 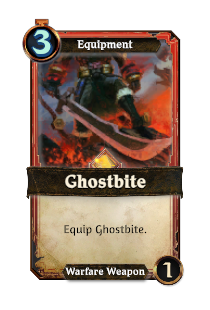 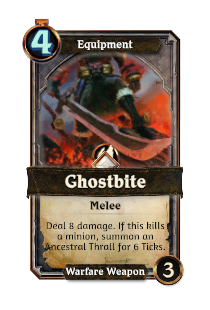 Ghostbite is a Legendary Warfare Equipment card that equips to the Weapon slot with Durability 3, allowing that many uses before it is expended. Though it takes 3 Ticks to equip and each use costs 4 Ticks after that, it deals high enough damage to kill weakened Lair Minions or most Minions summoned during battle. When it kills a Minion, it summons an Ancestral Thrall to help the Heroes fight for the next 6 Ticks, dealing extra damage and absorbing enemy attacks. Ghostbite can make all the difference against a Boss deck that summons a lot of Minions.