I've re-uploaded the mod 2021-04-24 - and it's been updated with at least 69 new strat-models at minimum. It also has a few updates to both campaigns - removing any CTD-friendly unit and improving things. - Now it also has big changes to the Frozen Throne-campaign, and it has been changed over the entire map. 37 of the strat-models are the same as in the april 10th release - 32 new models has been added since.

Warning: Always start a quickbattle after re-starting the game using the new version, before you launch a new campaign - and then exit the game back to the main menu immediately after the loading screen has finished after you have entered the battle-map. You don't have to play the actual battle but just load it up - this is required in order to launch a campaign in the new version - or the mod will throw you back to the main menu alternatively CTD (crash to desktop) - I've had this issue in Game of Thrones: Total War Enhanced in the past and i believe it is caused by too many things on the strategic-map!

It worked fine up until Tyrande got added but after started to require this to be done. Moving over the mod-changes to my other computer solved it with everything up until Tyrande - but after updating with the entire Night Elven strat-map and the rest of the previewed content - it even started to happen on there as well.

Other players have had to do this on the old release - so it could be both due to the map-changes and the computer - as they had old computers and more recent computers would take longer until this started to happen.

- So always start-up a quickbattle, then exit after the loading screen has finished loading - then launch the campaigns - if you exit a campaign you can start another one up immedieately. The mod will crash if you click on the Frozen Throne-campaign and then try to go to the Reign of Chaos-campaign without first starting up the FT-campaign.

1. You need to go into the folder named "Medieval II Total War" and then copy the file named "medieval2.exe" - then rename the copied file to kingdoms.exe. This is needed or the mod won't launch with Steam.

2. You do need to patch the medieval2.exe and the kingdoms.exe with a program named "4gb patch" found at this link:

3. It's a program, extract it anywhere on your computer, then run it as an administrator - then browse to both .exe-files inside of the "Medieval II Total War"-folder and select one of them and click on "patch" - then repeat the process with the other one.

4. You need to have just one folder named "WTW" as in "Steam\steamapps\common\Medieval II Total War\mods\WTW - and then You'll start it by double-cllicking the executable.bat-file of the mod.

5. With the CD instead it would be "D:\Games\SEGA\Medieval II Total War\mods\WTW - and you'll still start it by double-clicking on the executable.bat-file.

Also, download the MedievalII.Preference-file that i did upload on here & place in main Medieval II Total War folder - replacing the old file there. This will enable you to play defensive battles in hotseat, as well as prevent a bug causing CTD when clicking buildings on the campaign - it will also make FMV's work. 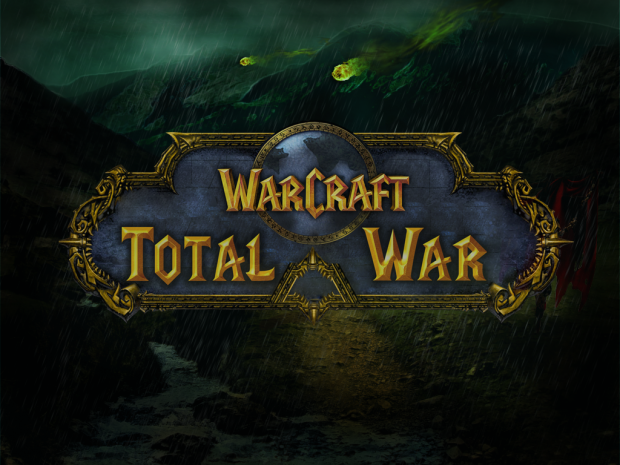 So a new temporary download has been uploaded and released called Warcraft: Total War V 2.1. It includes some changes including 69 brand-new strat-map models minimum since april 10th - 32 of which are new to this release on april 24th, changes to the map in the Frozen Throne-campaign especially - it has been overhauled and made more accurate to the timeline and to lore. Gameplay is always chosen over lore though.

I've re-uploaded the mod 2021-04-24 - and it's been updated with at least 69 new strat-models at minimum. It also has a few updates to both campaigns - removing any CTD-friendly unit and improving things. - Now it also has big changes to the Frozen Throne-campaign, and it has been changed over the entire map. 37 of the strat-models are the same as in the april 10th release - 32 new models.

1. Fixed Dryad Merchant - it's now in proper size and not tiny like in the april 10th release. 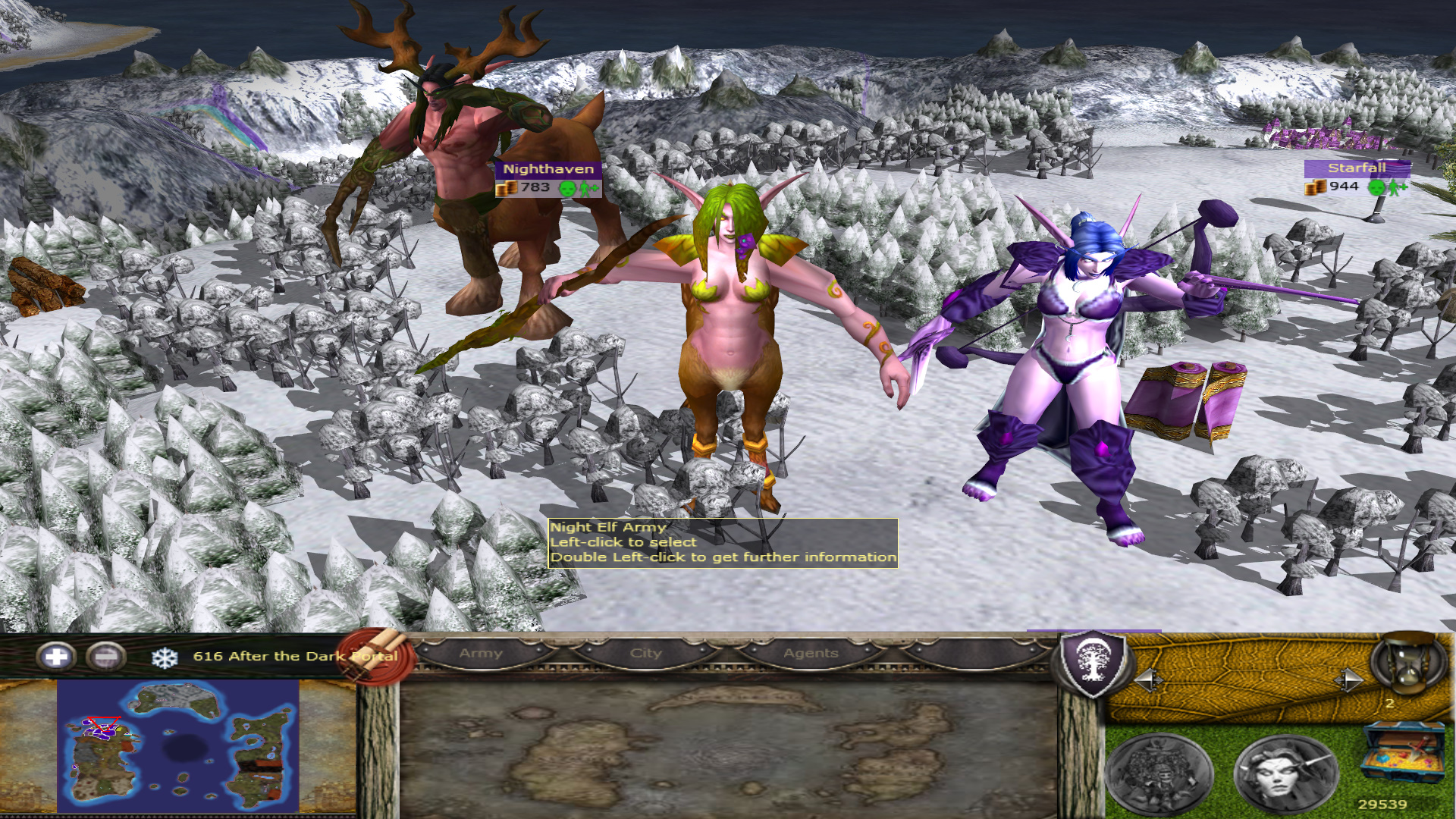 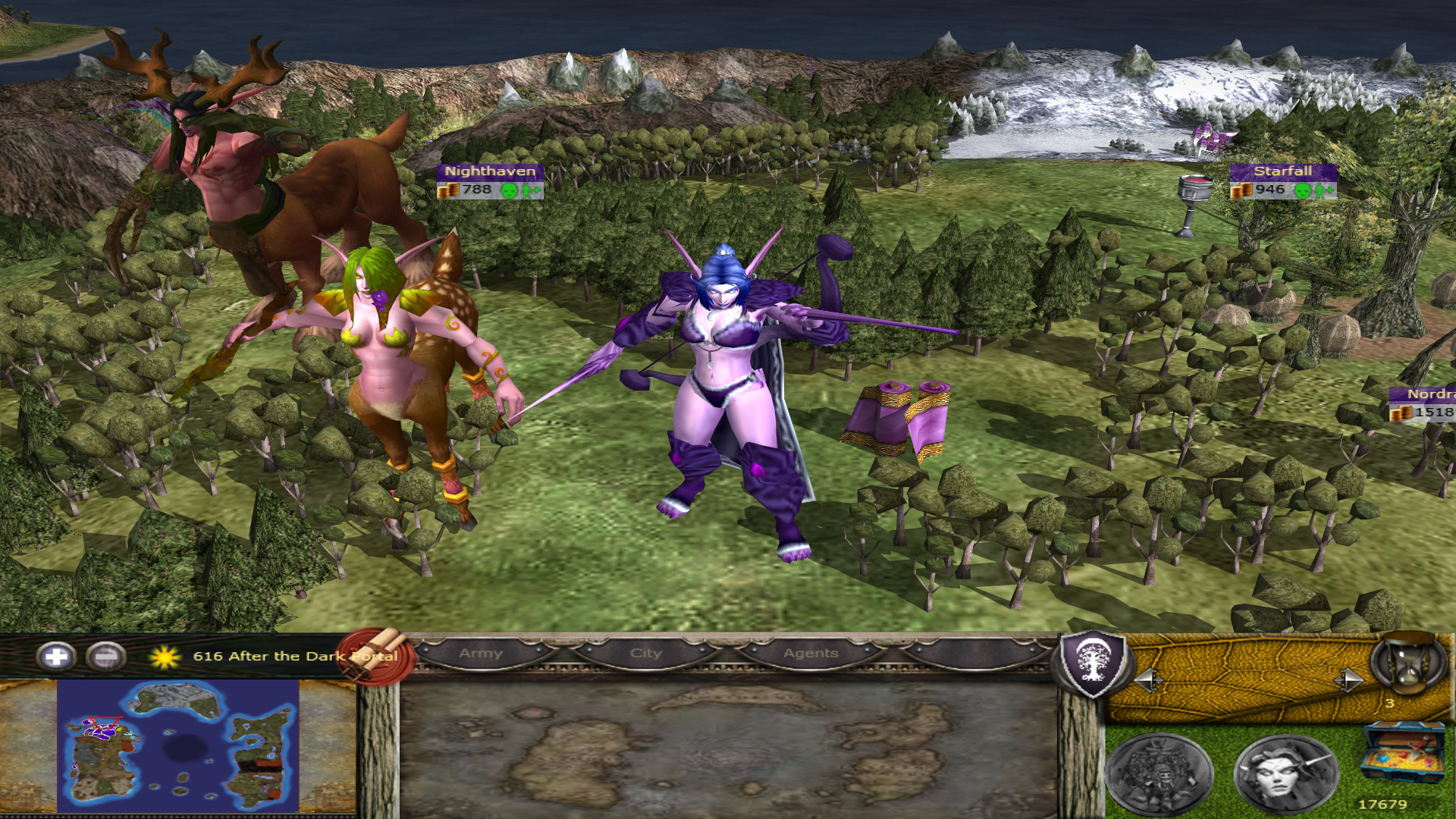 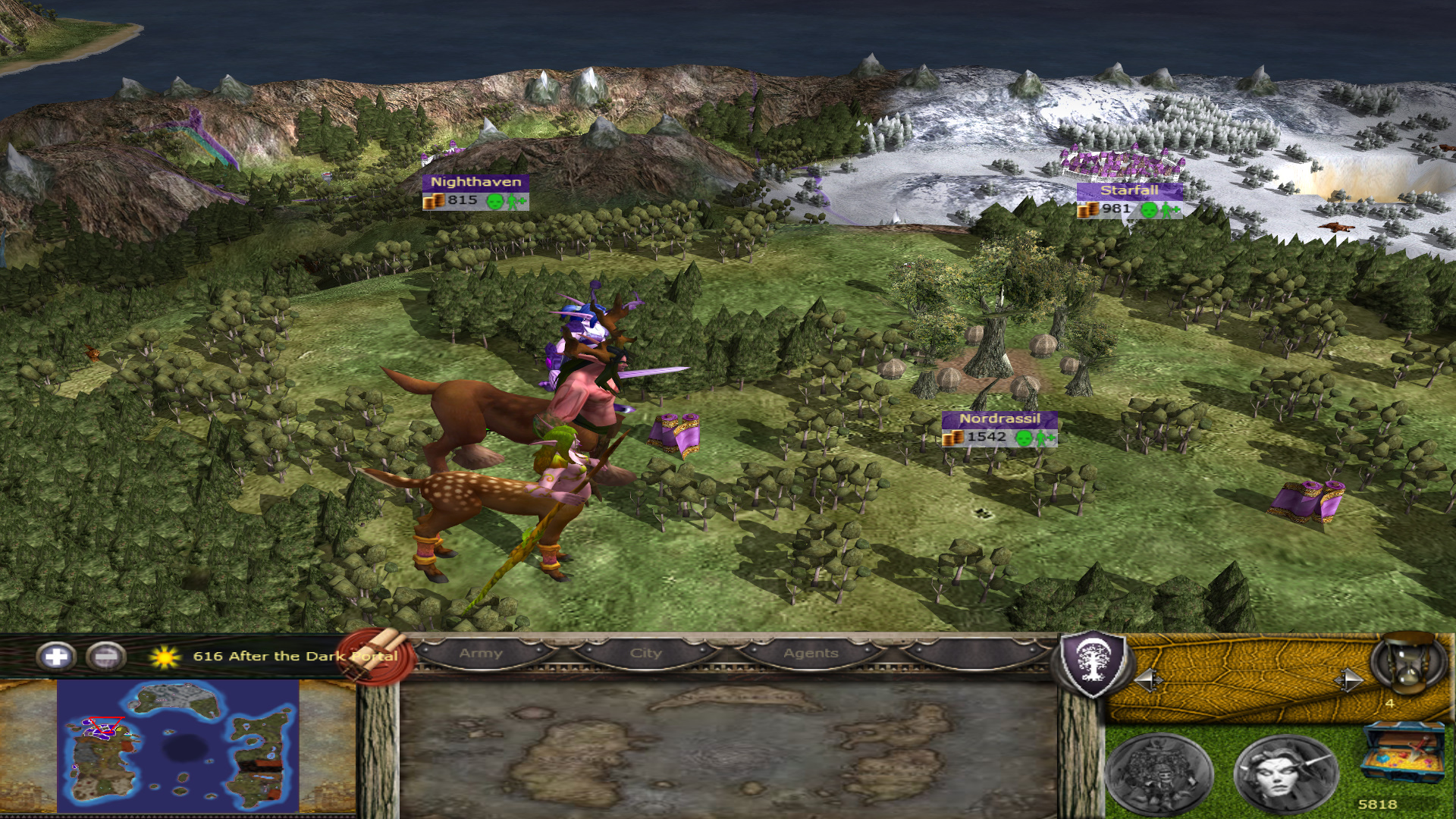 2. Added custom Ymirjar Champion generals to the Scourge - they have two in the RoC-campaign and 4 in the FT-campaign. 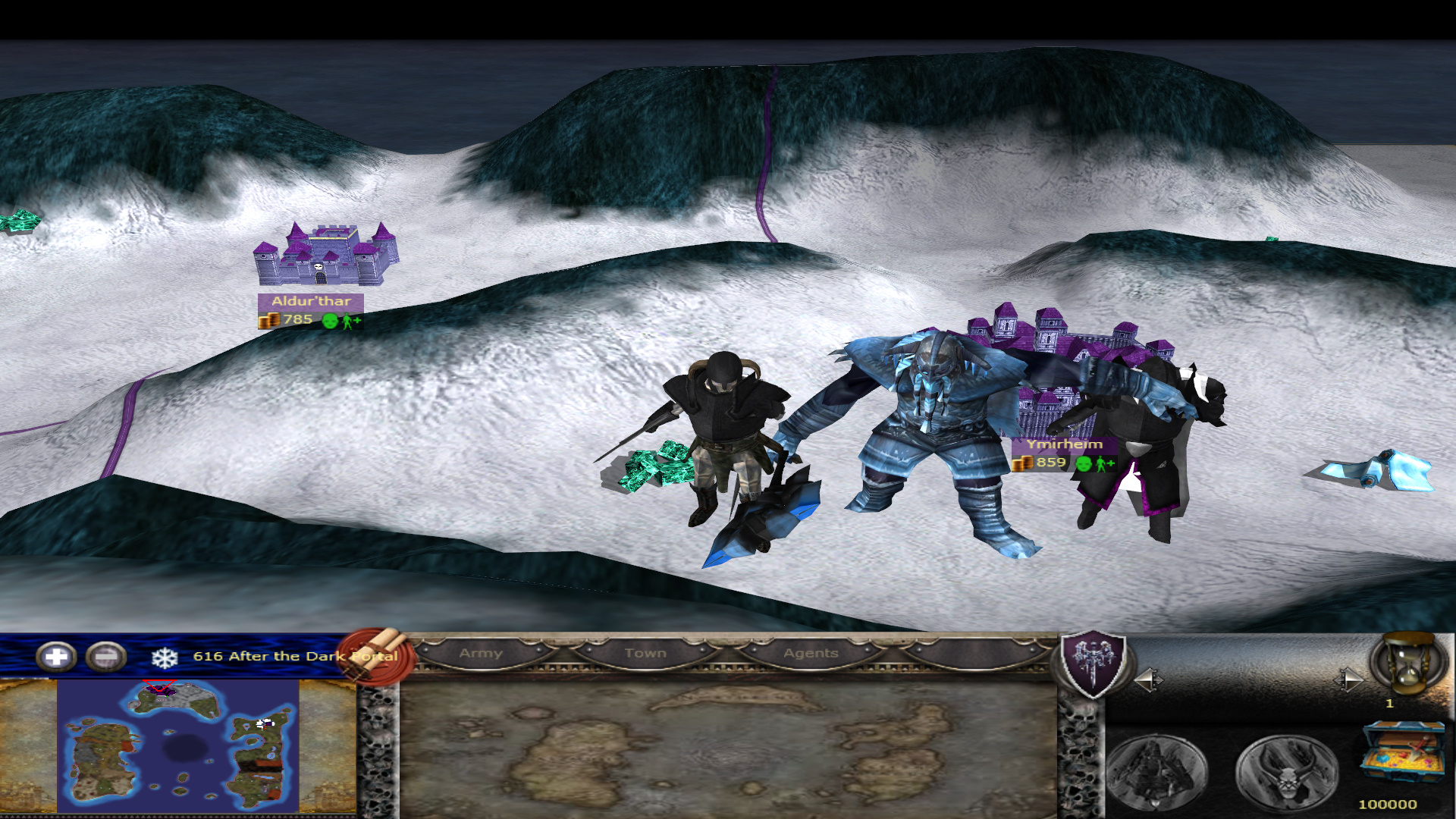 3. Added custom Banshee generals to the Scourge and the Forsaken - Sharlindra and Selas. 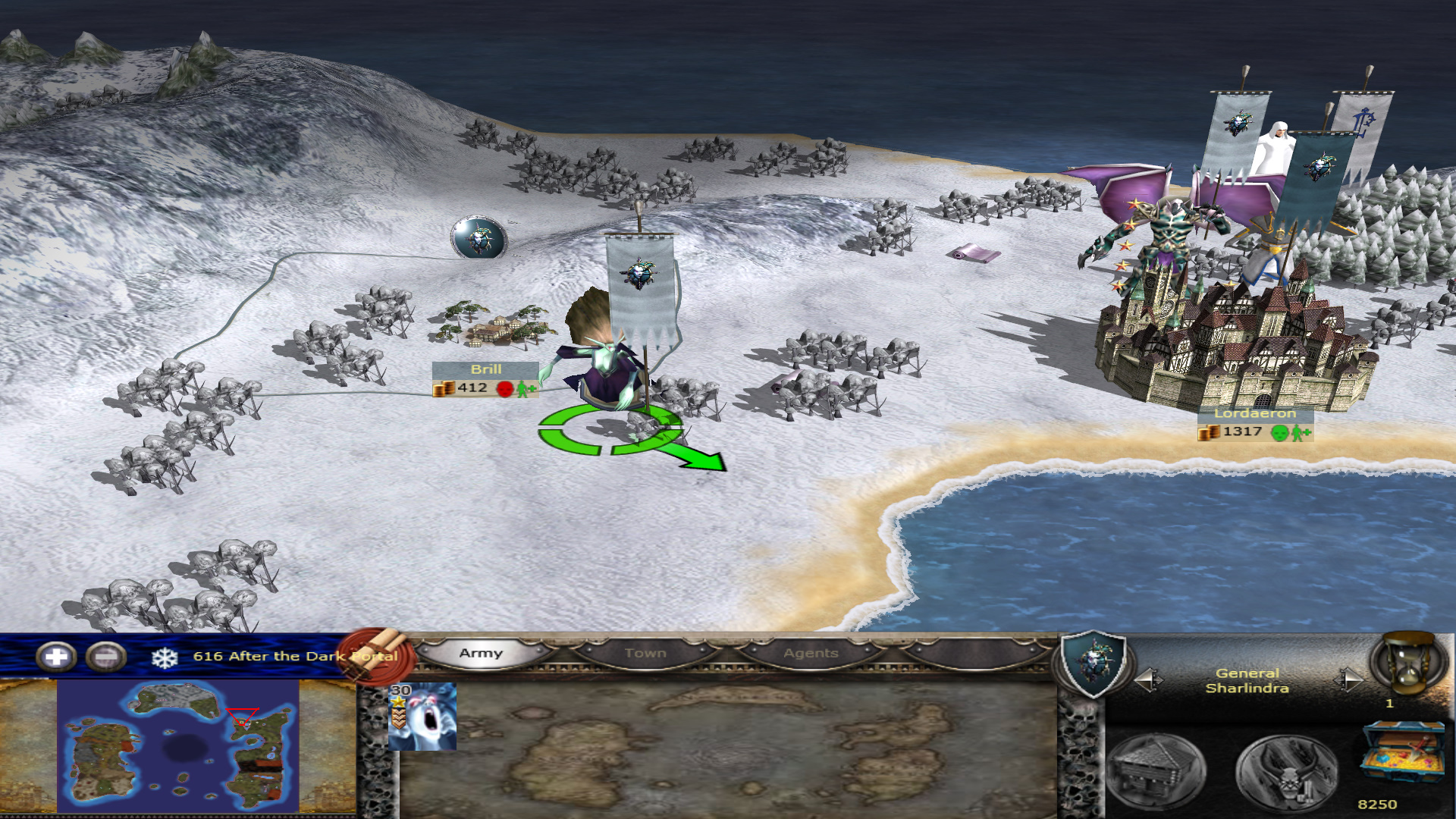 4. New Forsaken custom heroes and agents on the map as strat-map models - heroes include the Dreadlord Varimathras in the Frozen Throne-campaign, as well as the Banshee Sharlindra. 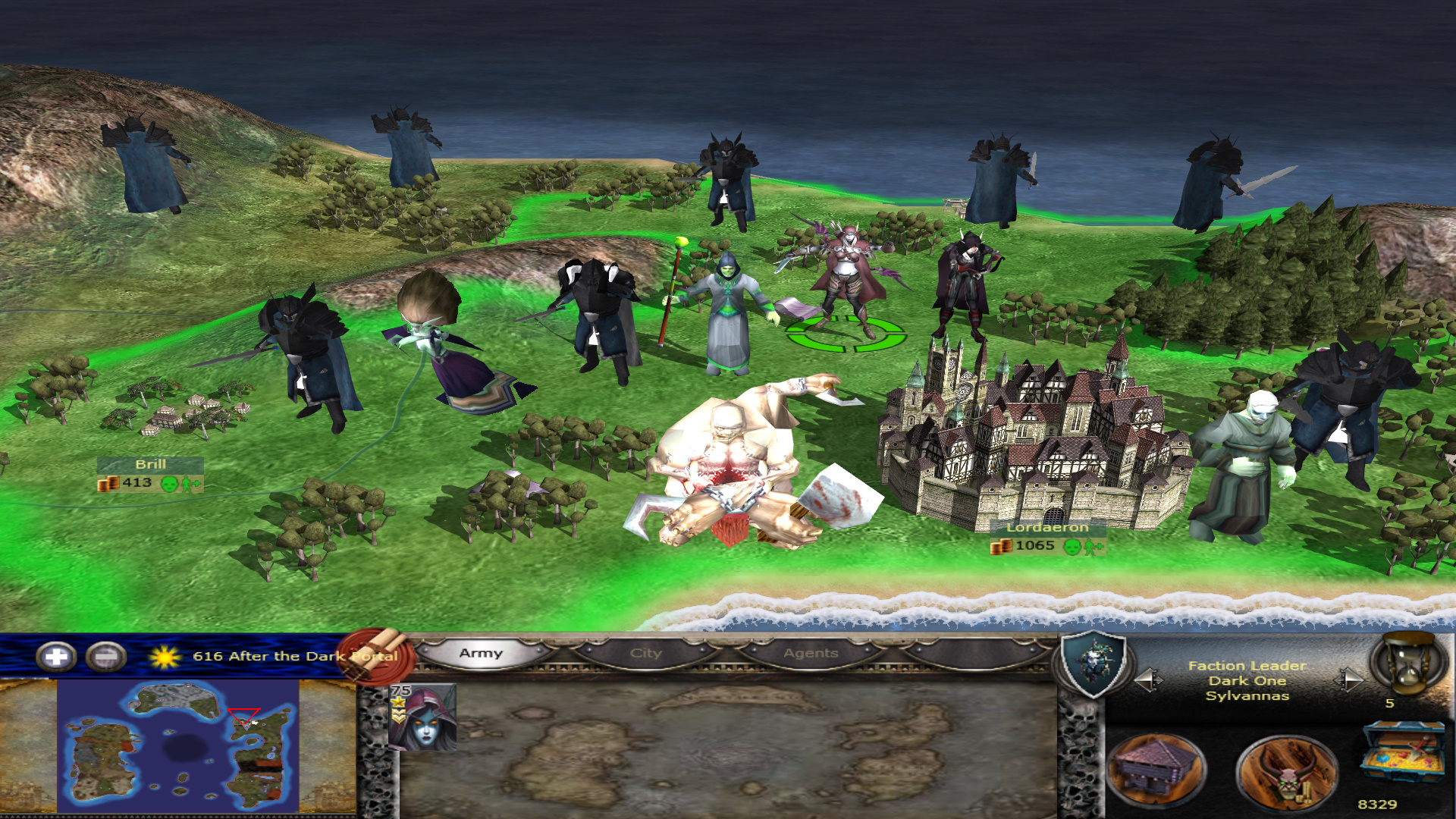 I've fixed the silver surfer swords of the Forsaken Generals and Captains added in the latest public release. Besides that I've replaced the glitched agent in use by all the Forsaken agents.

Spy = Reskin of the Banshee in use by the Scourge as the spy.

Diplomat = Aphotecary without a staff and hood and with a different face and different clothes. 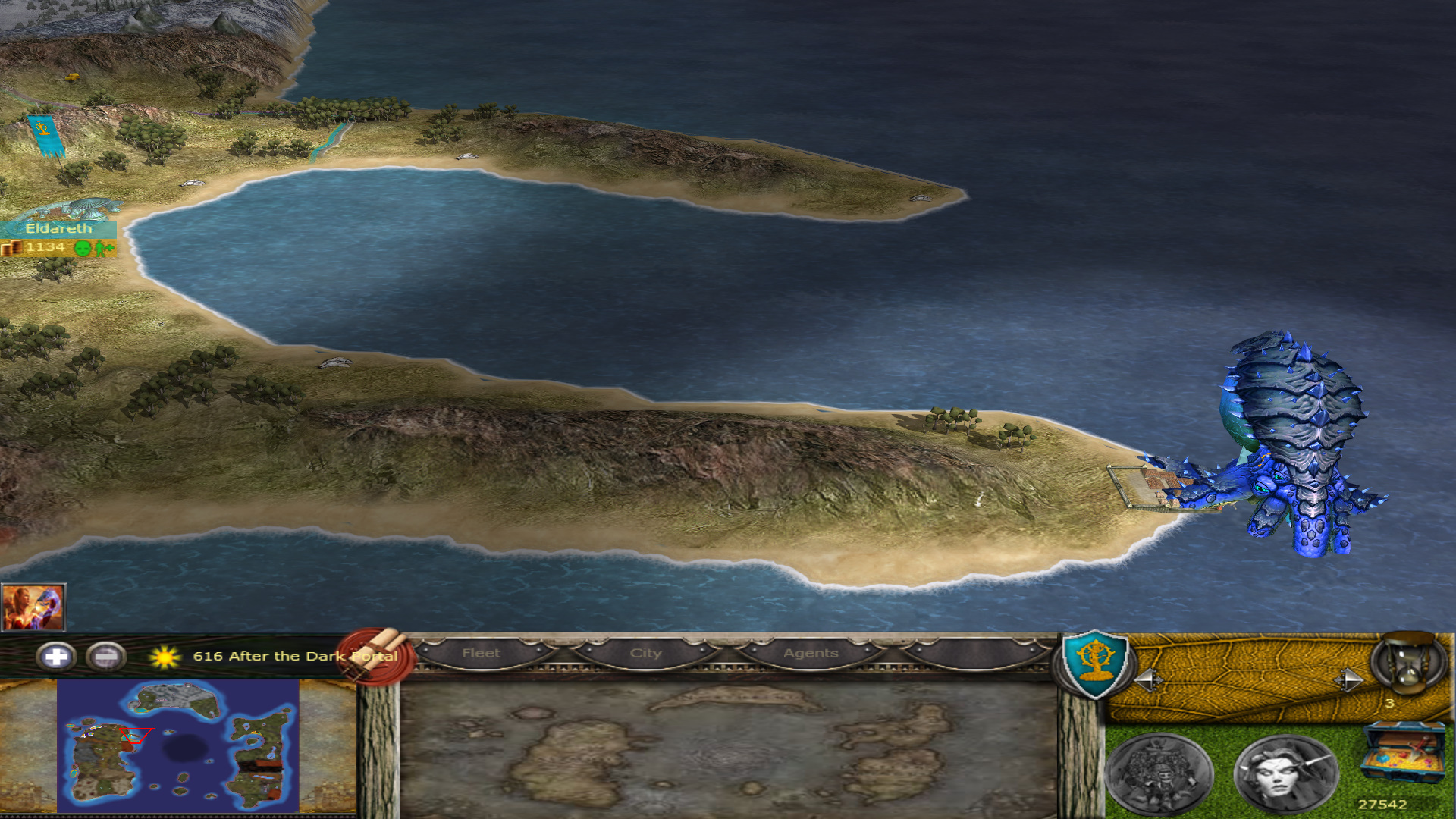 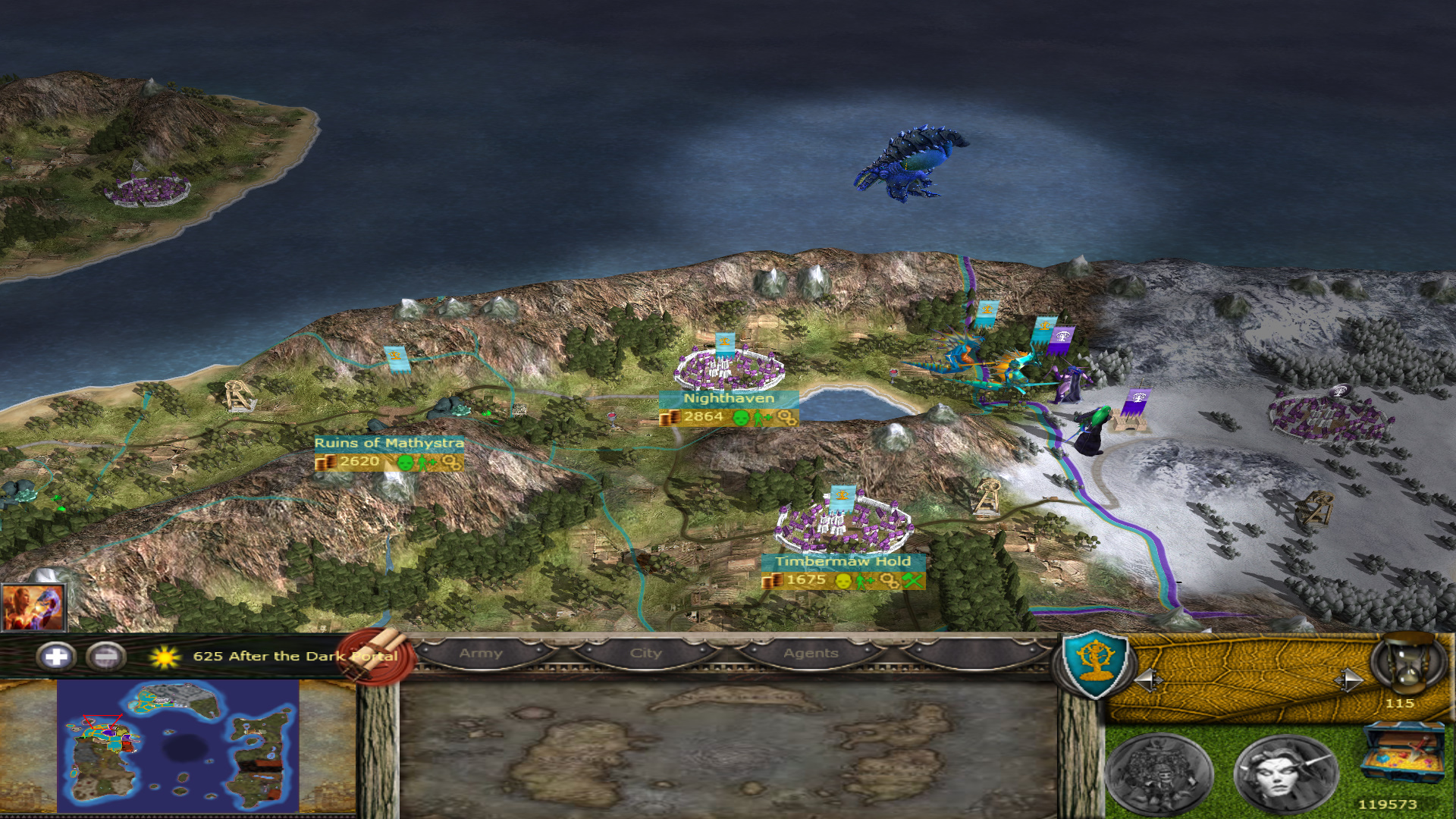 6. New High/Blood Elven strat-models (where in the prior Discord-only release) - the High Elves are only in the Reign of Chaos (RoC)-campaign while the Sin'Dorei/Blood Elves are in both campaigns - the later do spawn in the RoC-campaign and are playable in the Frozen Throne (FT)-campaign. 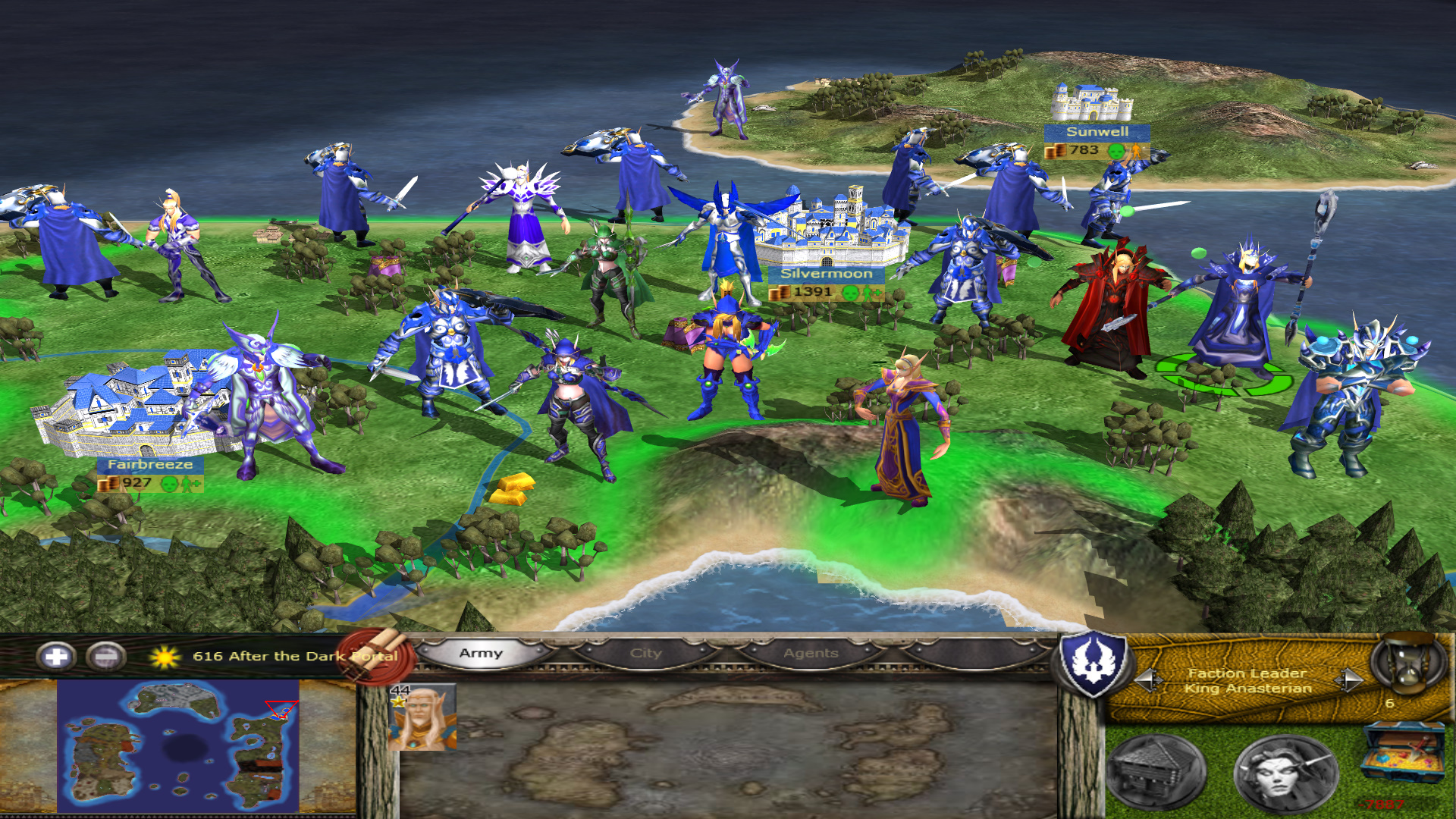 Unique custom character (1) = Sylvannas Windrunner - now the only one with the blue ranger-skin on the map. 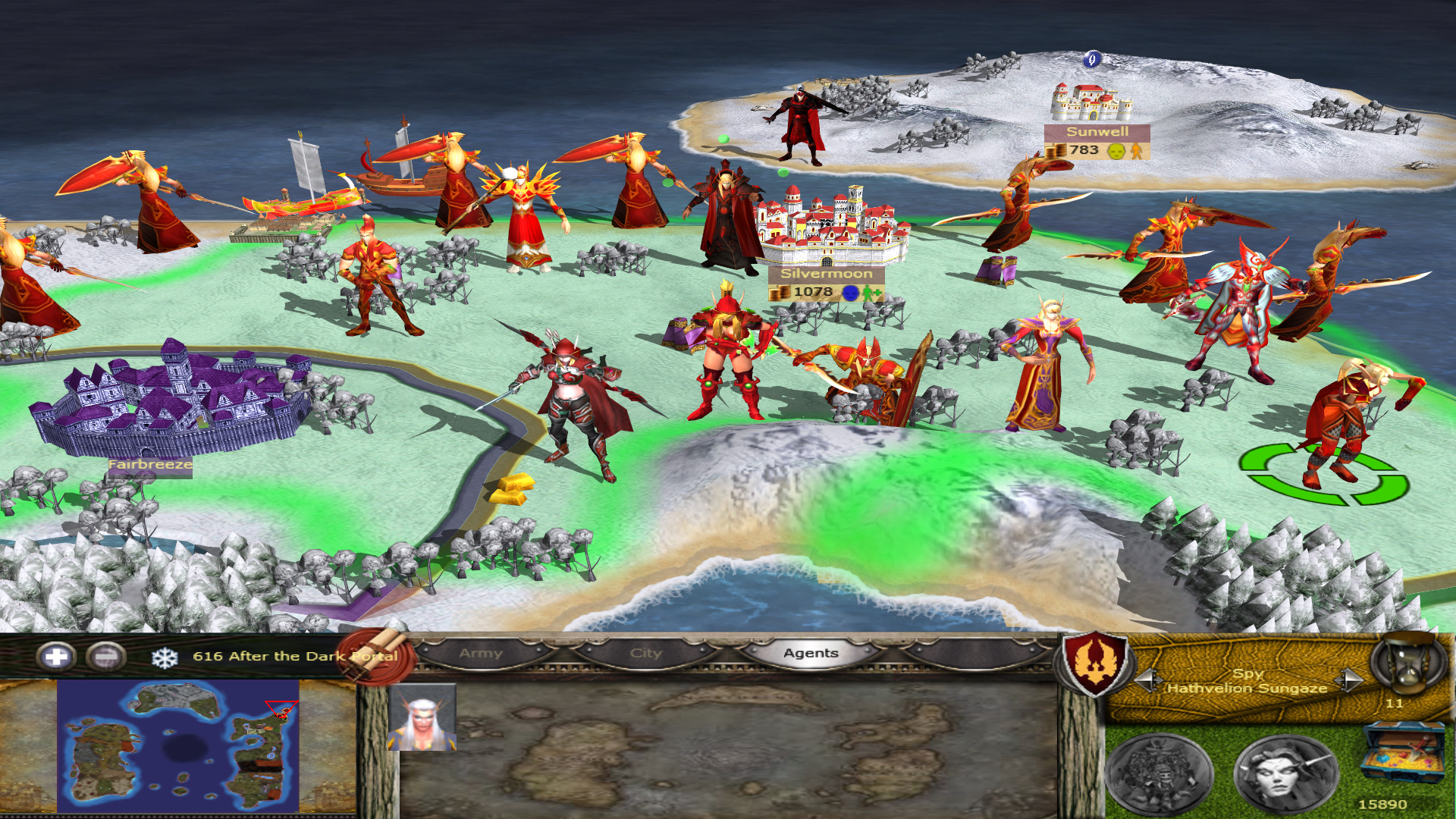 General (0) = New Brightwing Vindicators - replacing the old general by Bantu Chieftain. This model ain't in the picture because I failed to spawn a general and didn't have patience waiting.

7. New Naga strat-models (where in the previous Discord-only release) - now with all their strat-models remade. 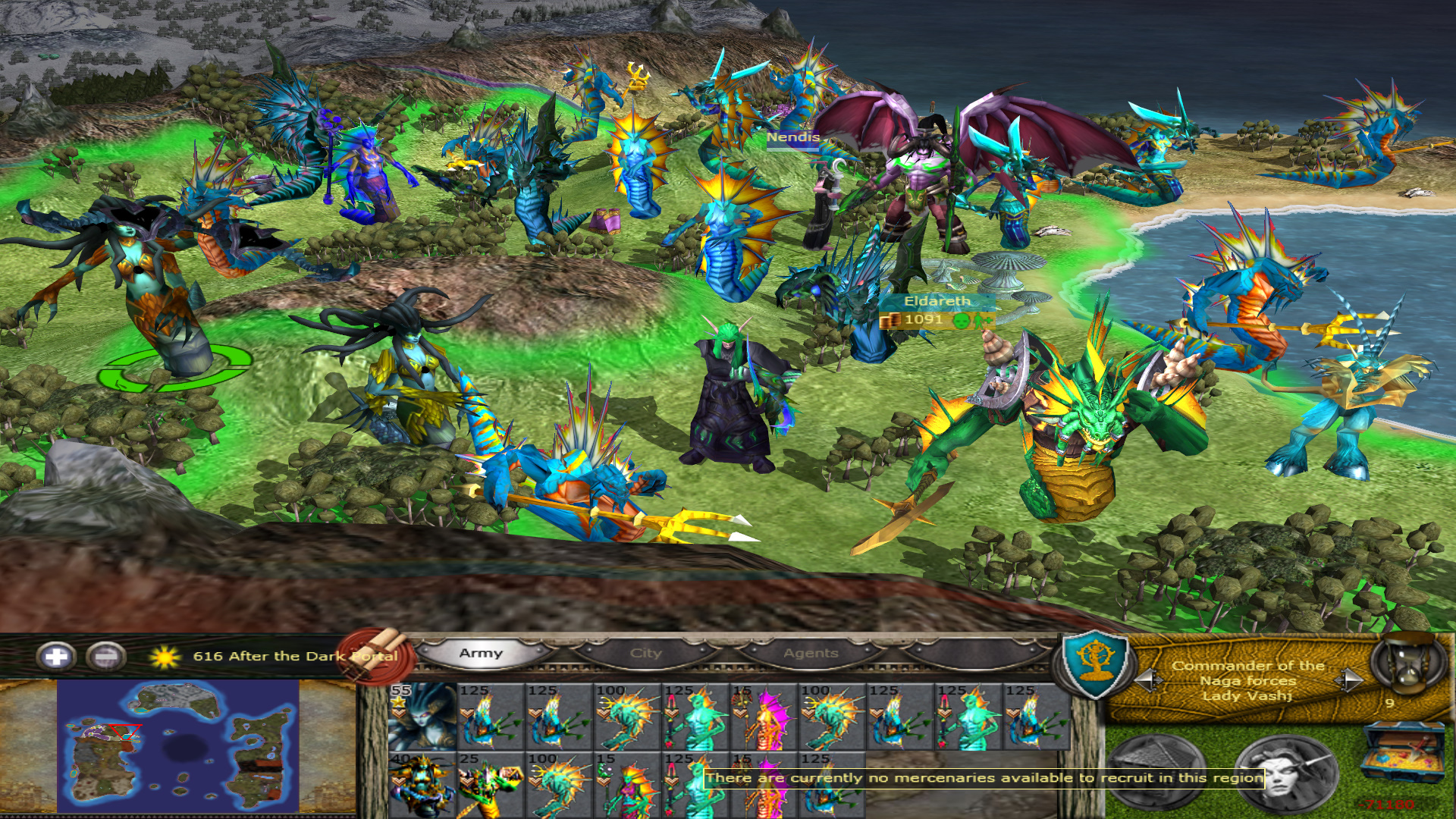 Soldier = New blue Guardians of the Abyss with yellow tridents.

Unique custom character (4) = Veehja - the Naga Sea Witch in Northrend - is using the same model as the merchant.

8. New Burning Legion strat-map agents and generals including custom heroes - now with their models unique and no more Fel Orcs on the map or too many Dreadlord agents. 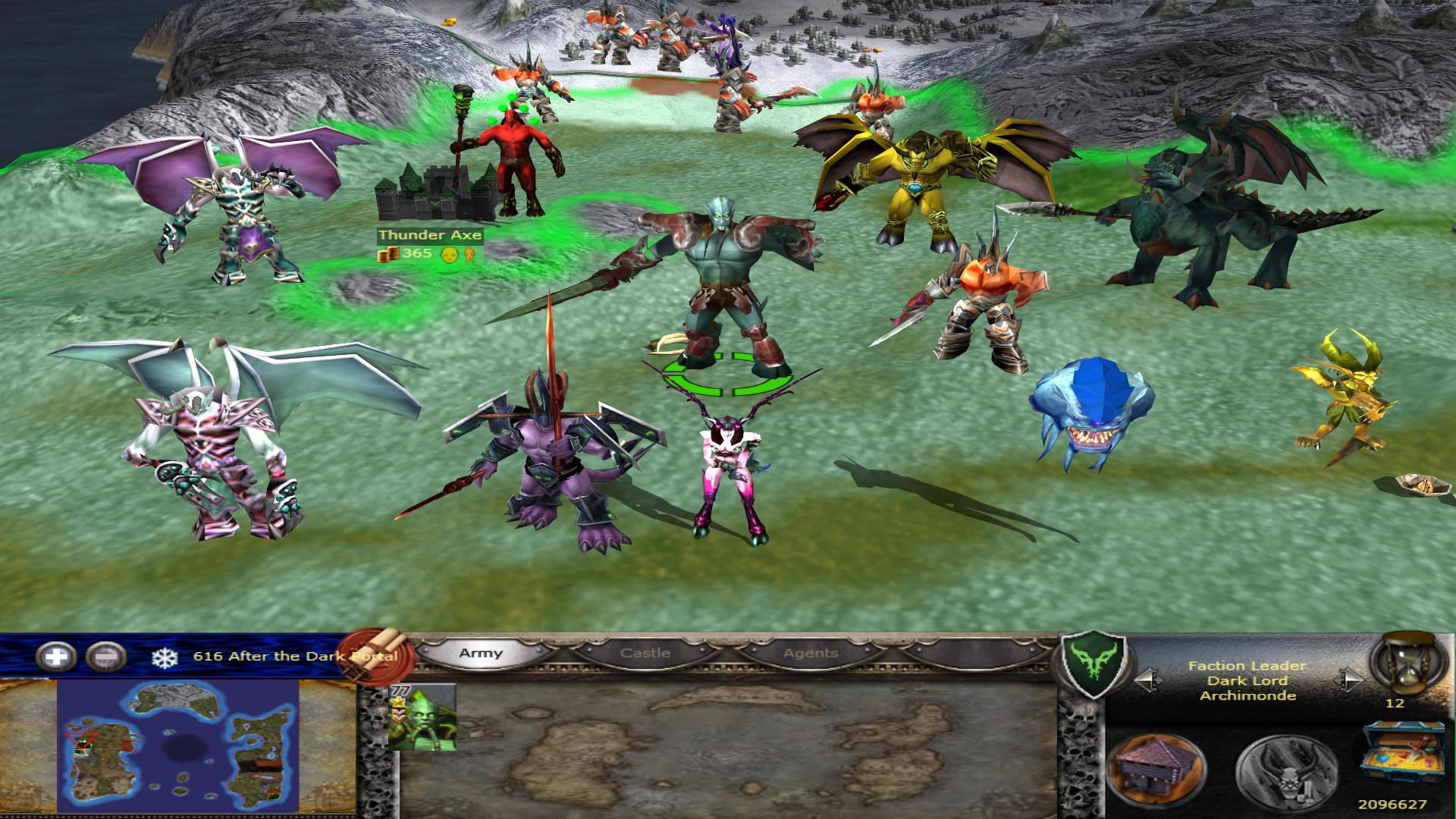 Unique custom character (1) = New Pit Lord General in use by Azgalor and Mannoroth.

Unique custom character (2) = Old Dreadlord model in use by generals that are Dreadlords.

Unique custom character (3) = New Eredar General - in use by Dark Lord Archimonde - and in the Frozen Throne campaign in the future probably Kil'Jaeden..

Unique custom character (4) = New Kazrogal - a unique giant demon - he looks like a yellow Diablo with a giant red sword.

9. A remade Frozen Throne campaign with every continent and faction changed to better fit the FT-timeline. 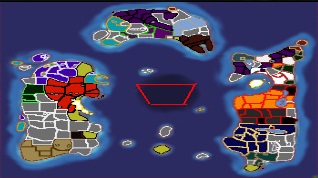 - Gameplay changes in the FT-campaign includes:

2. New settlements at the start for the majority of the factions.

3. Alliances between the Horde, Theramore and the Night Elves in Kalimdor.

4. Lordaeron at war with the Blood Elves/Naga at the start.

5. Certain factions moved like the Naga and the Blood Elves have been moved from Eastern Kingdoms to Northrend - the Blood Elves still hold Silvermoon and the Sunwell in EK.

6. Stromgarde has Southshore and Lordaeron has Dalaran, Lordaeron only starts with Dalaran, Theramore has the Kul'Tiras Isle including Daelin and Tandred Proudmoore, Khaz'Modan has Menethil (harbor).

7. King Kael'Thas and Marshall Garithos Othmar have elite armies to better enable them to fight the elite Scourge-armies.

8. And besides these changes Death Knight Arthas now spawns in Northrend as well where he will besiege Ulduar held by the Blood Elves through a script.

Other changes, including the changes to the Frozen Throne-campaign - Mr_Nygren.