Hello! We have made some progress on religious matters. Hence, I think it is time to talk about our religious setup in more detail.

We have made some progress on religious matters. Hence, I think it is time to talk about our religious setup in more detail.

Our setup consists of 7 religious families: Light, Chaos, Death, Shadow, Order, Life and Element. Each family has its own settings that regulate hostility inside and outside the family. For example, the Order family will be the most tolerant one towards other religions.

Adding new religions, we adhered to the idea that one faith cannot be in different parts of the world. If some population has slight differences in traditions and is isolated from others, it is worth getting a new religion. Following this idea, a lot of new beliefs arose.

Religions of the Eastern Kingdoms

Let's move to the changes in the Eastern Kingdoms. This region contains many diverse religious families: from arcanic high elves to shamanic Kul Tiran humans. Thus, to unite and force to work together, we have come up with a solution: the Eastern Syncretism tenet. All religions that are supposed to be in the Alliance's ranks will have it. It makes the faith consider other faiths with the same tenet to be Astray instead of Hostile or Evil. Thus, holy wars between these religions are unlikely. 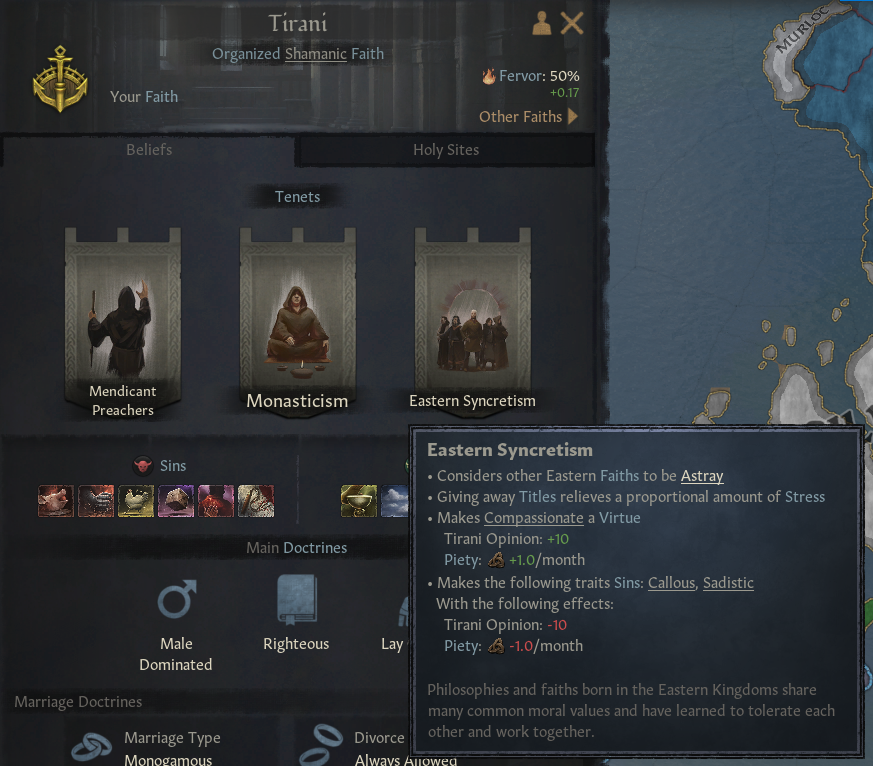 Now about new religions on the continent: Khazism and Gwyari.

Khazism is a dwarven offshoot of the Holy Light. It's independent of the Holy Light Church and preserves dwarven titanic traditions. Therefore, the dwarves form strong bonds with the titan-forged. It is the dominant religion in Ironforge and pre-Ragnaros Shadowforge. 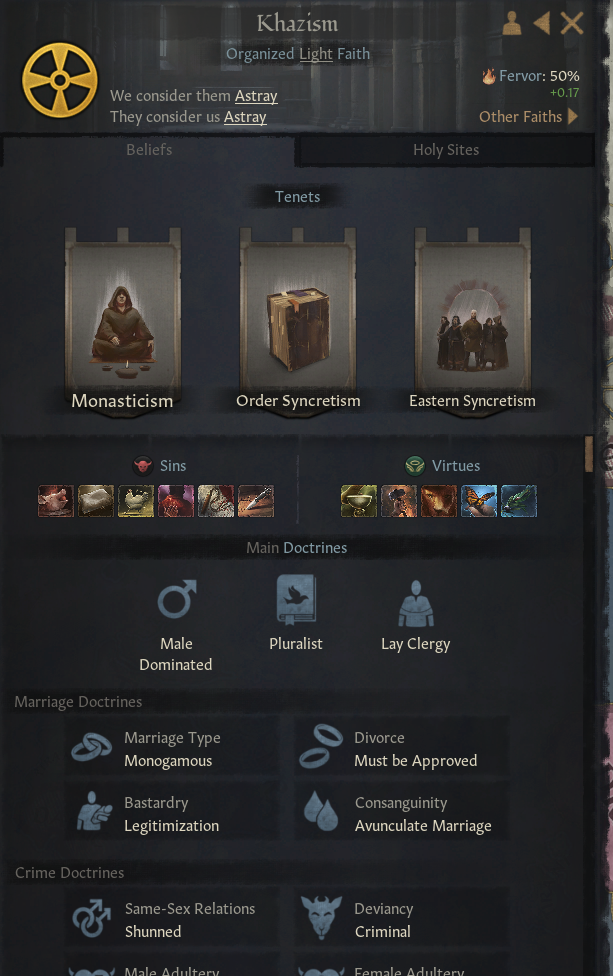 On the other side of the mountains lies the Gwyari religion. It is a dwarven version of shamanism. The Wildhammer dwarves value their clan hierarchy and close family bonds. Hence, their faith focuses on interactions with their ancestors. 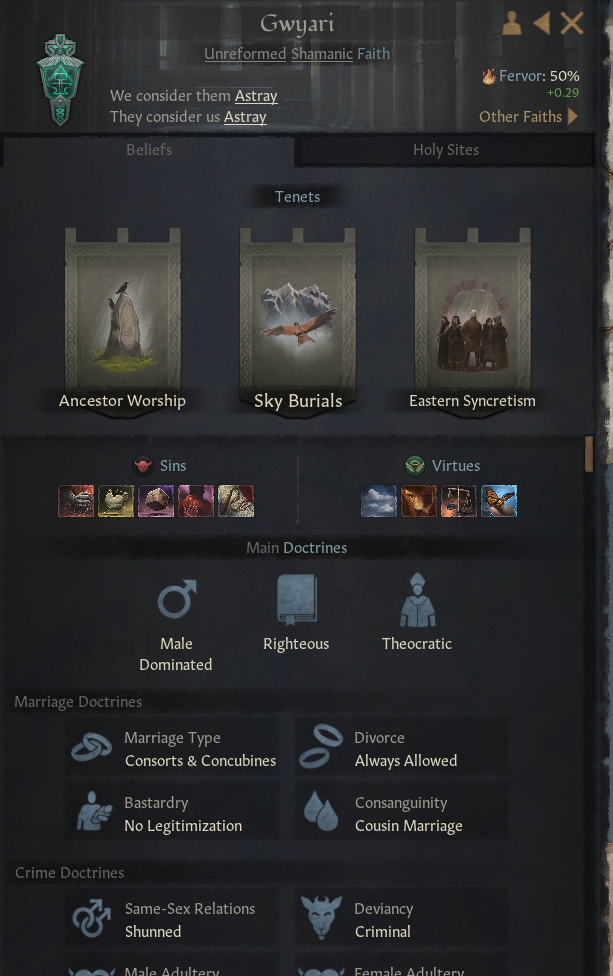 We have also decided to split troll Loa religions into five pantheons, one per each great tribe: the Zandalari, Farraki, Gurubashi, Amani and Drakkari. Each pantheon will have a unique feature that represents the great tribe's traditions. For example, the Zandalari will be known for its tolerance. 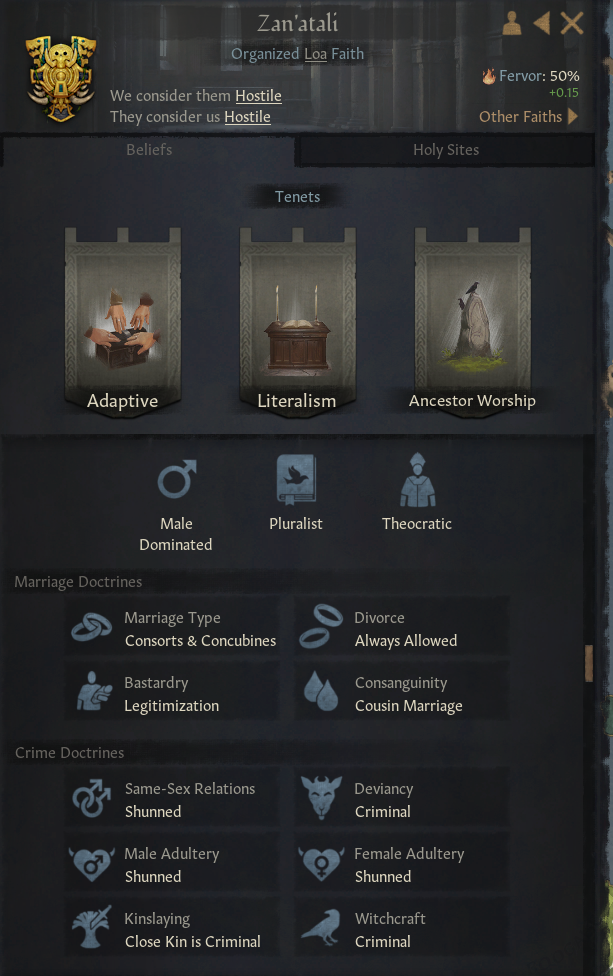 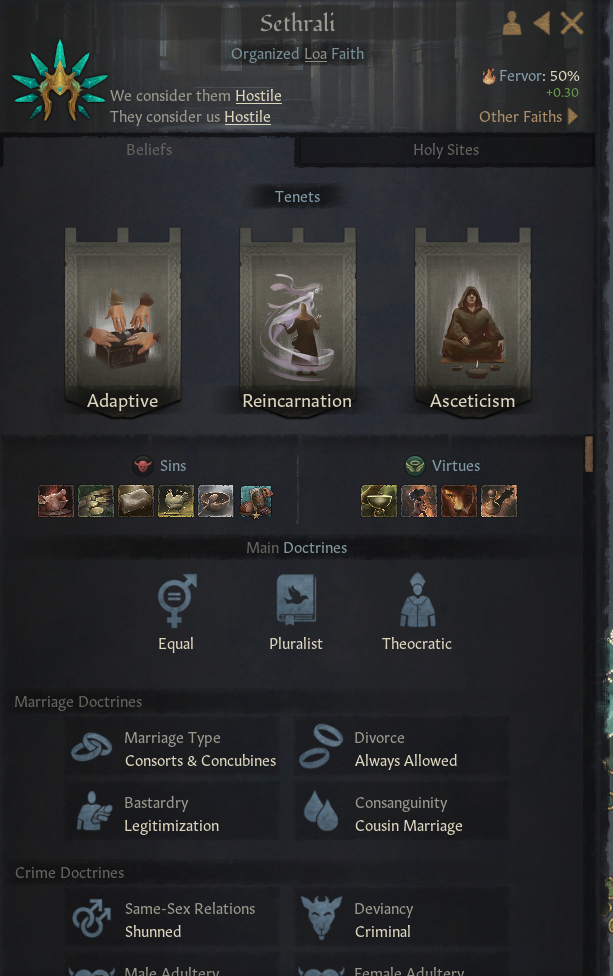 Let us move north. Two new faiths have appeared in Northrend. The taunka, also known as snow tauren will follow the shamanic Roanaki religion that represents their eternal fight with the harsh climate and nature of the cold continent. The tuskarr pantheon and traditions will be implemented as the Oachani faith that, like many other shamanic faiths, favours a big family, ancestor and spirit worship. 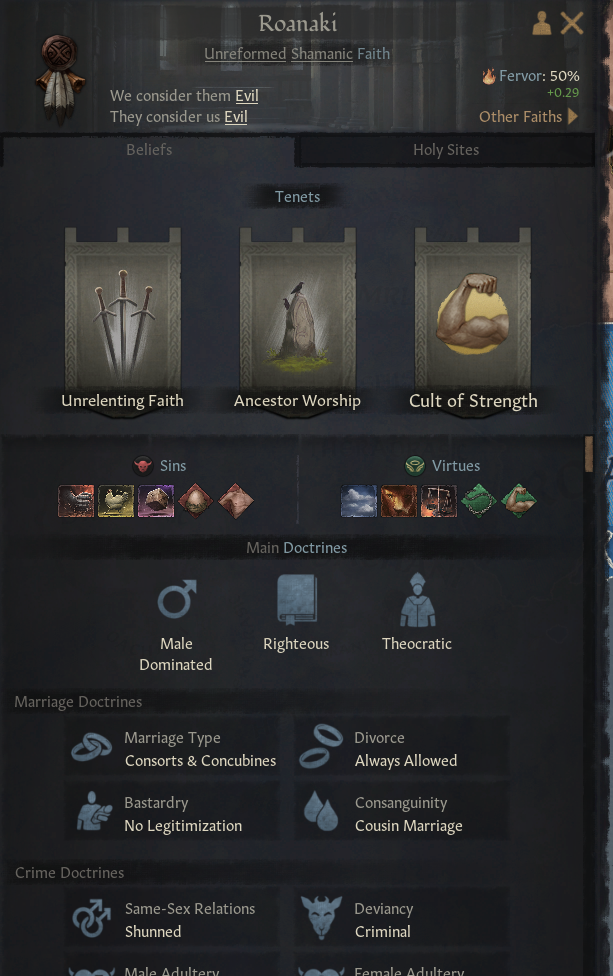 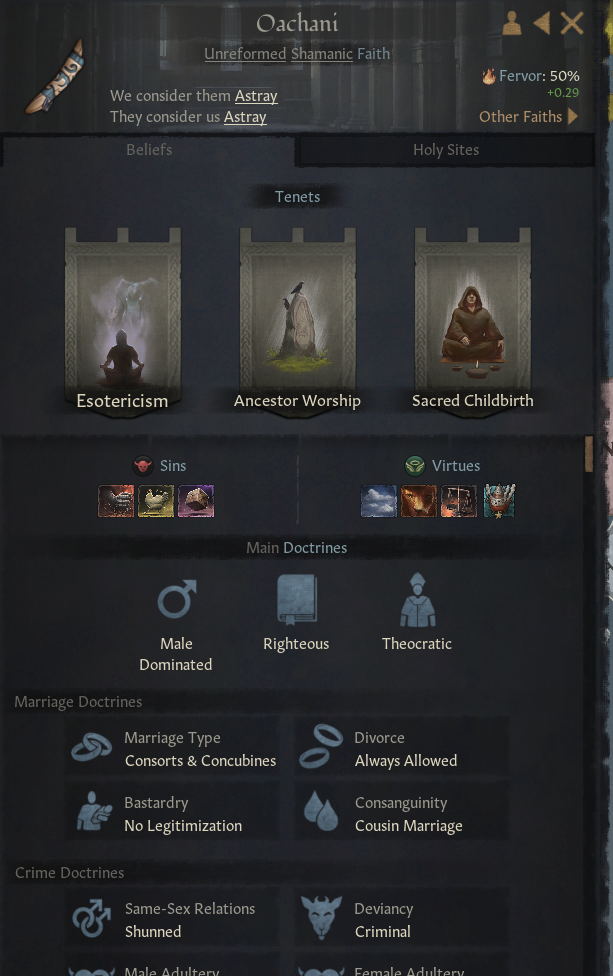 In addition to these two religions, we have also decided to give something new to northern humans. Previously they had the Holy Light religion, but it was an odd choice for the region. The Holy Light Church appeared in the Arathor Empire, far away from Northrend. Therefore, we decided they will embrace a druidic belief, Staroverstvo, which has been preserved there since the Sundering. Their culture revolves around hunting, as proven by their religious tenets. 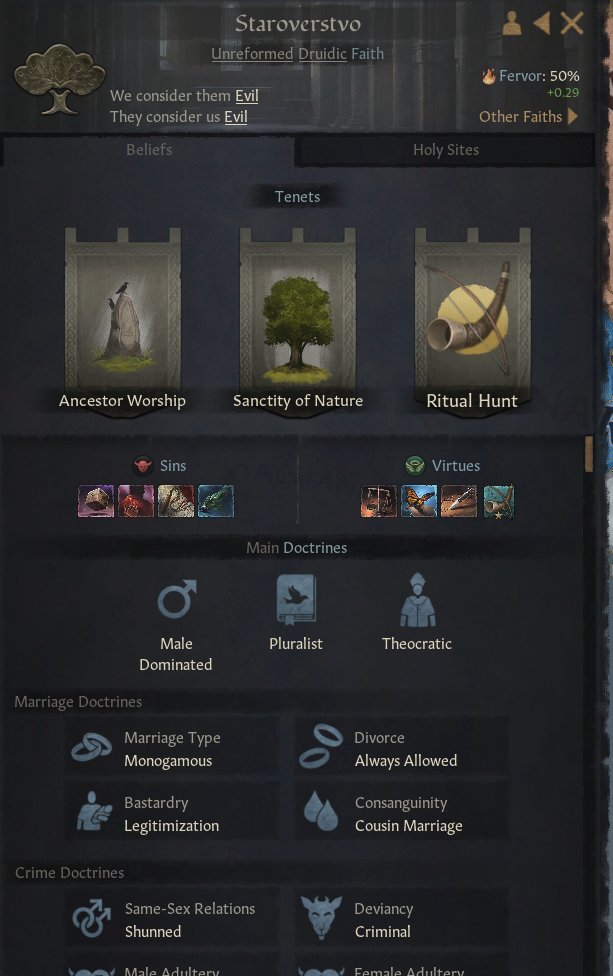 The hozen and saurok will also get their own religions. Boogalism will let the hozens live their lives to the fullest with raiding shinies and drinking slerp allowed. 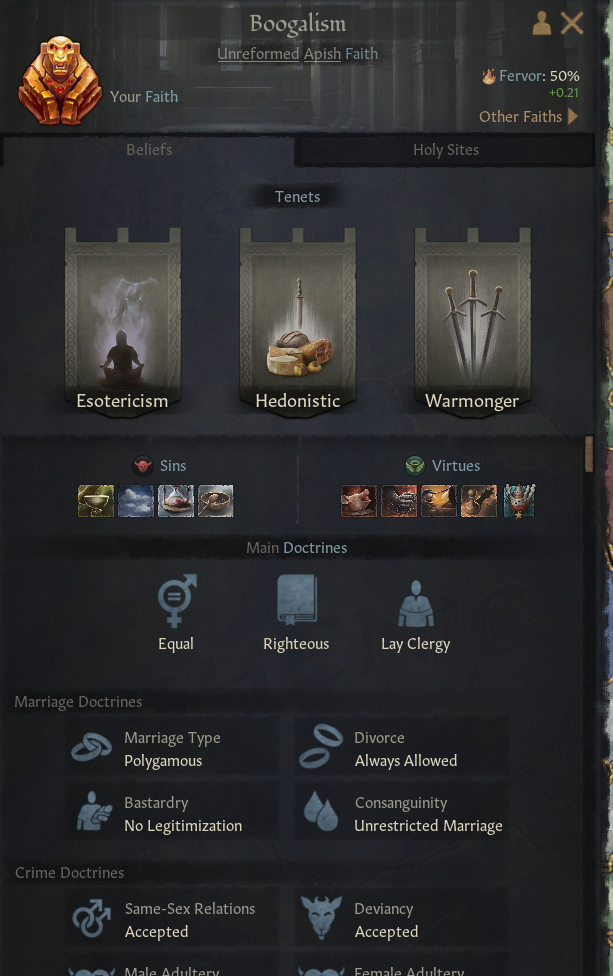 The saurok religion concept is based around Kros, the invisible devilsaur in the sky who watches over his children. The Krosi deny the theory of the saurok being created by the mogu. One of their tenets is the Cult of Strength that will help the saurok strengthen their bloodline. 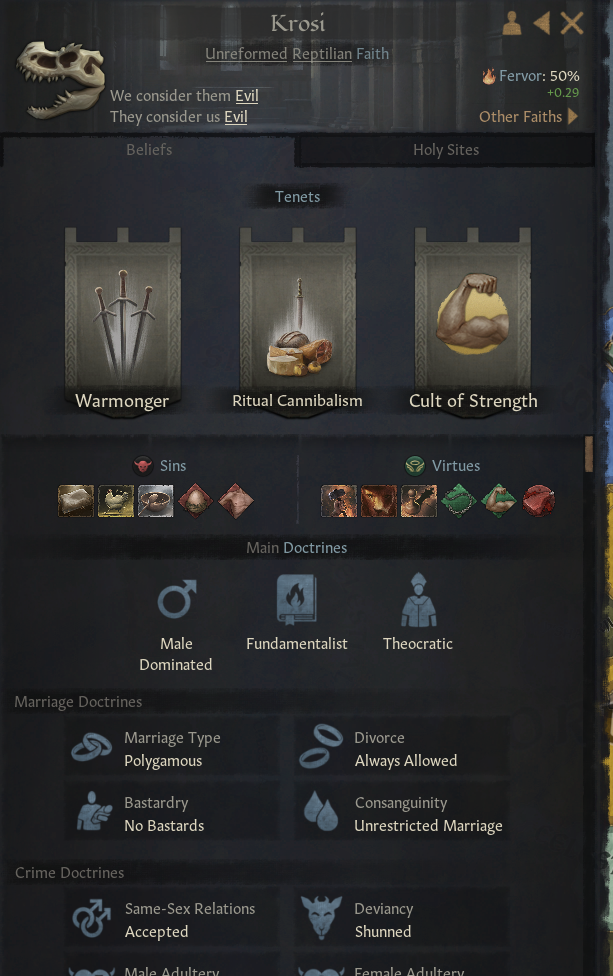 Goblins and gnomes will keep the same religions, but we will adjust their tenets. We've created two conflicting tenets specific to them: Consumerism and Progressivism. These tenets will have a negative opinion of each other. Progressivism will focus on technological progress and learning while Consumerism will concentrate on province development and stewardship. We may change their effects down the road. 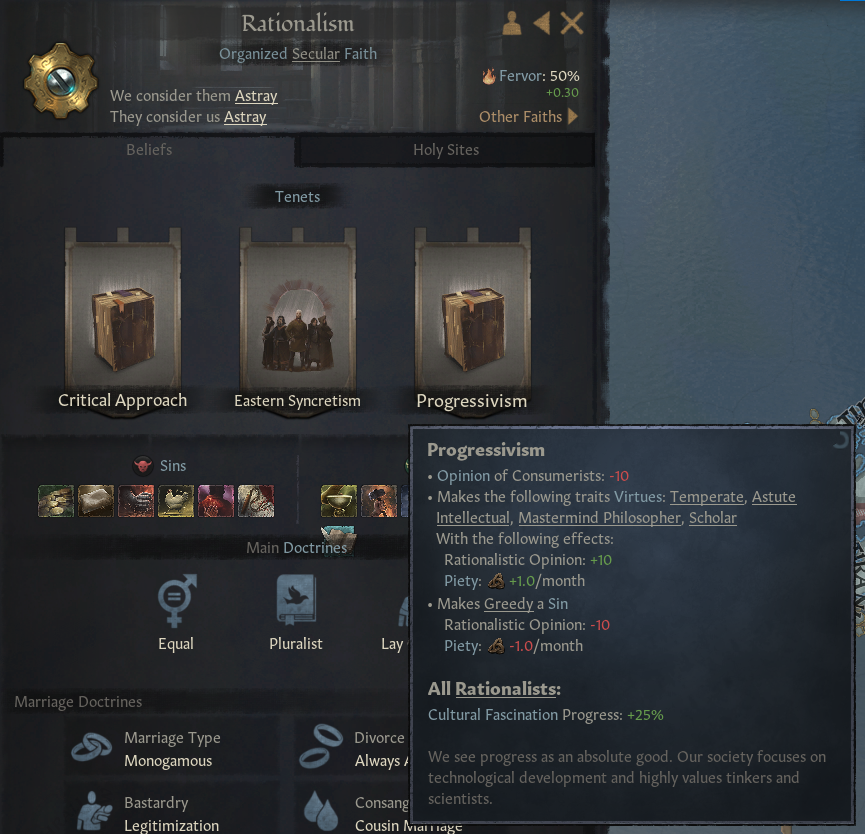 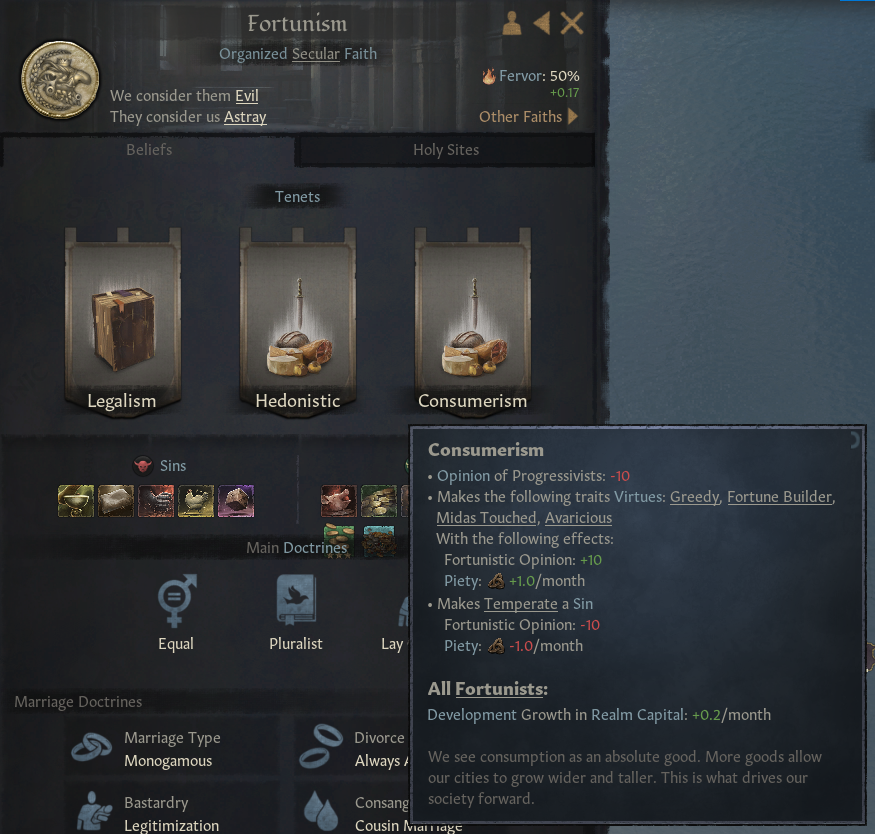 If you are willing to help, we are still Recruiting. It is super important to have more people working on the mod, especially on portraits, flags and icons.