It'll be back and working - and much improved - in our next release!

We have come to it at last, after years of questions and clamoring (and about six months of work)... War of the Ring in Age of the Ring!

This article will briefly explore our most significant changes and additions to this game mode. We are very thankful to Robnkarla for his groundbreaking work in RJ-RotWK, which he has made available for use, and to MaxHardy, who took charge in converting WotR to Age of the Ring, adding our new maps, factions, units and army leaders to the Living World.

Conquer Many More Regions and Territories...

In vanilla Rise of the Witch-king, WotR had 43 regions, split up into 7 territories: Arnor, Erebor, Eriador, Gondor, Mordor, Rhovanion and Rhûn. In Age of the Ring, we have more than doubled the region count:

111 regions in 11 territories - adding Haradwaith, Rohan, Misty Mountains, and Lindon. Each region has been newly outlined on the Living World, and comes with its own unique map to do battle on. 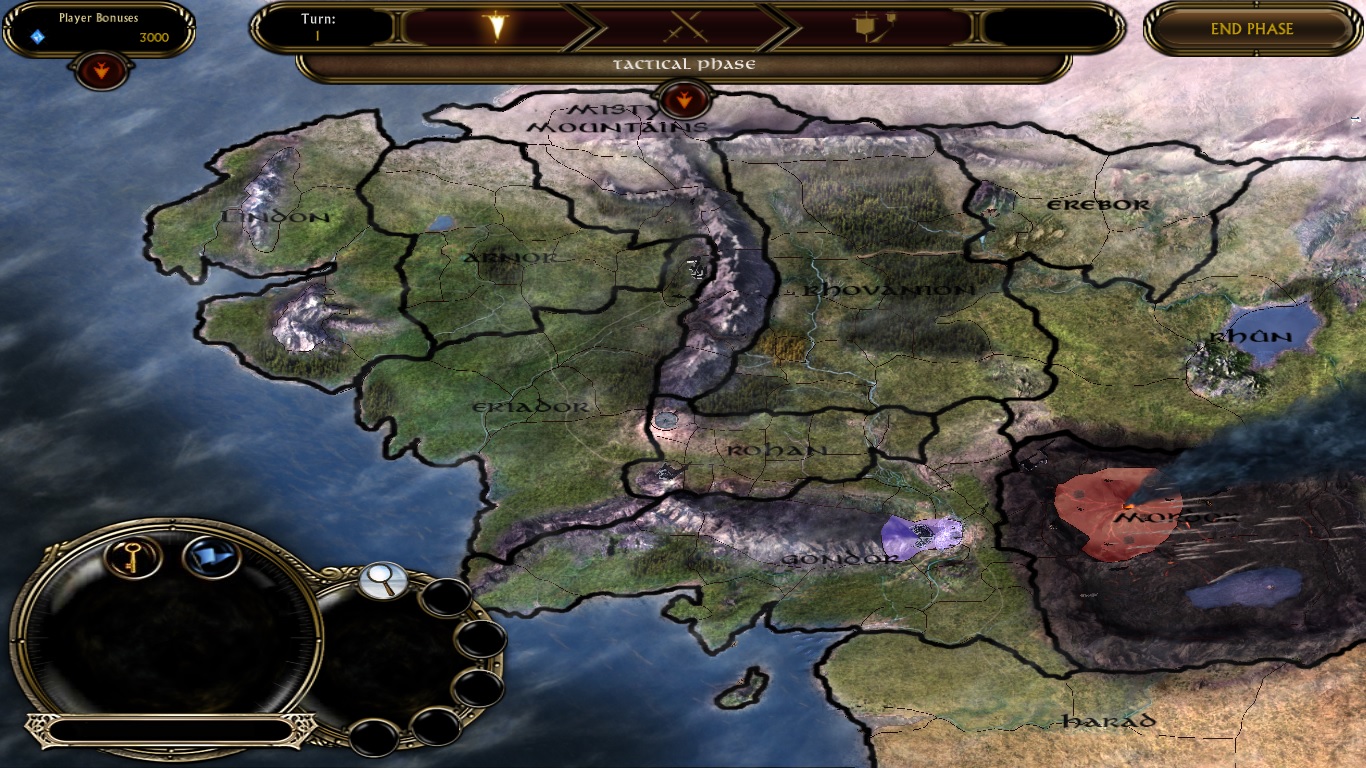 You will also note that the Living World has been given a brand-new look - thanks to Biddy! The Golden Wood is finally golden, baby.

Command Many More Heroes and Units...

Every new unit that we've added in Age of the Ring is now recruitable on the Living World, and in real-time battles. This leads to some pretty spectacular selection wheels: 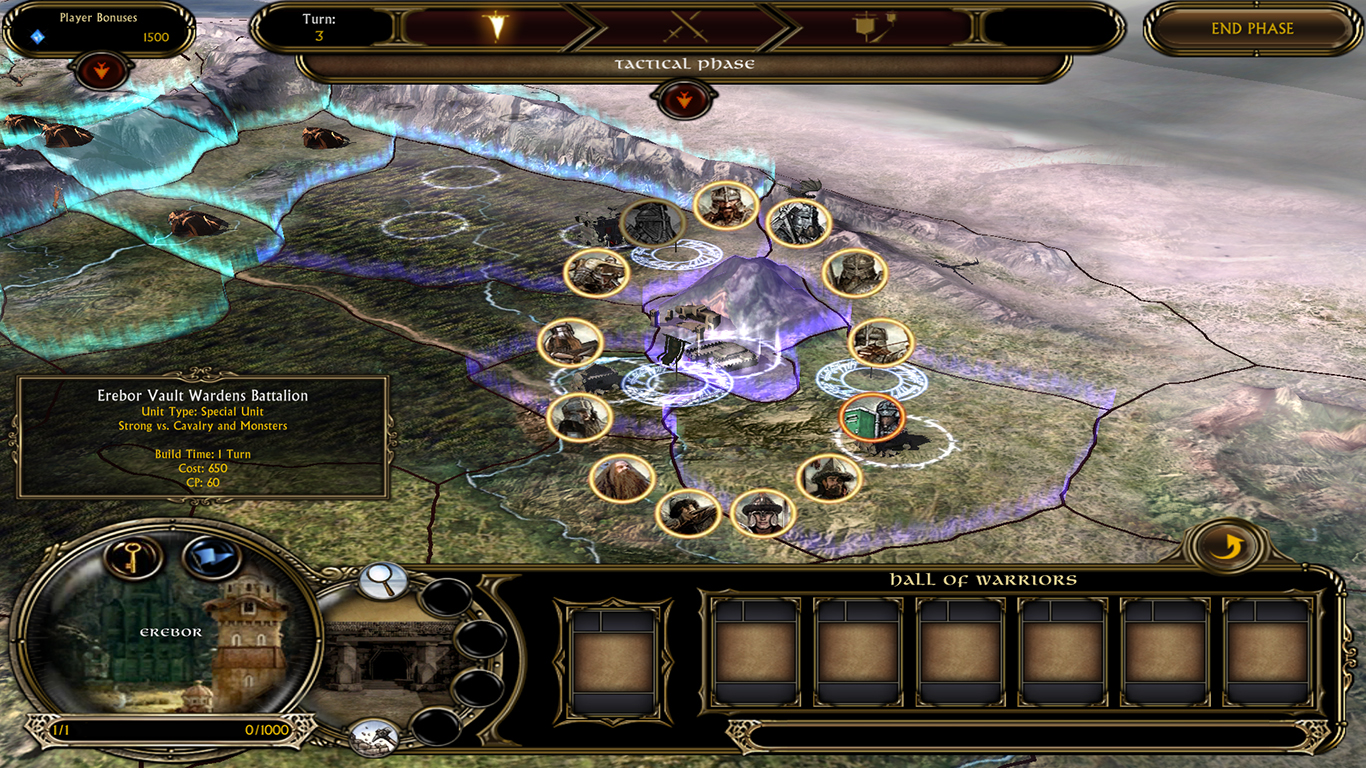 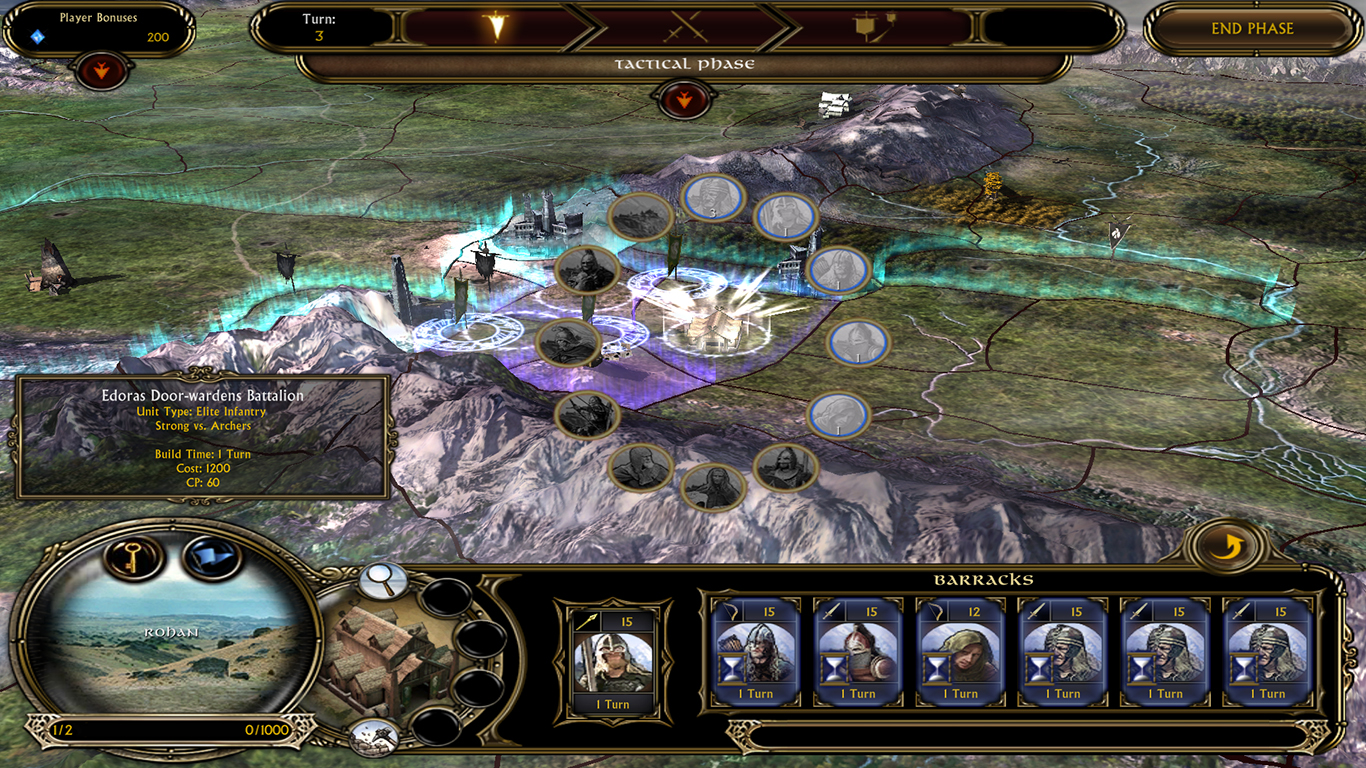 We have also redone the Army Leaders available for each faction, including vanilla factions. For instance, Gondor now starts out with Prince Imrahil to lead one of its armies: 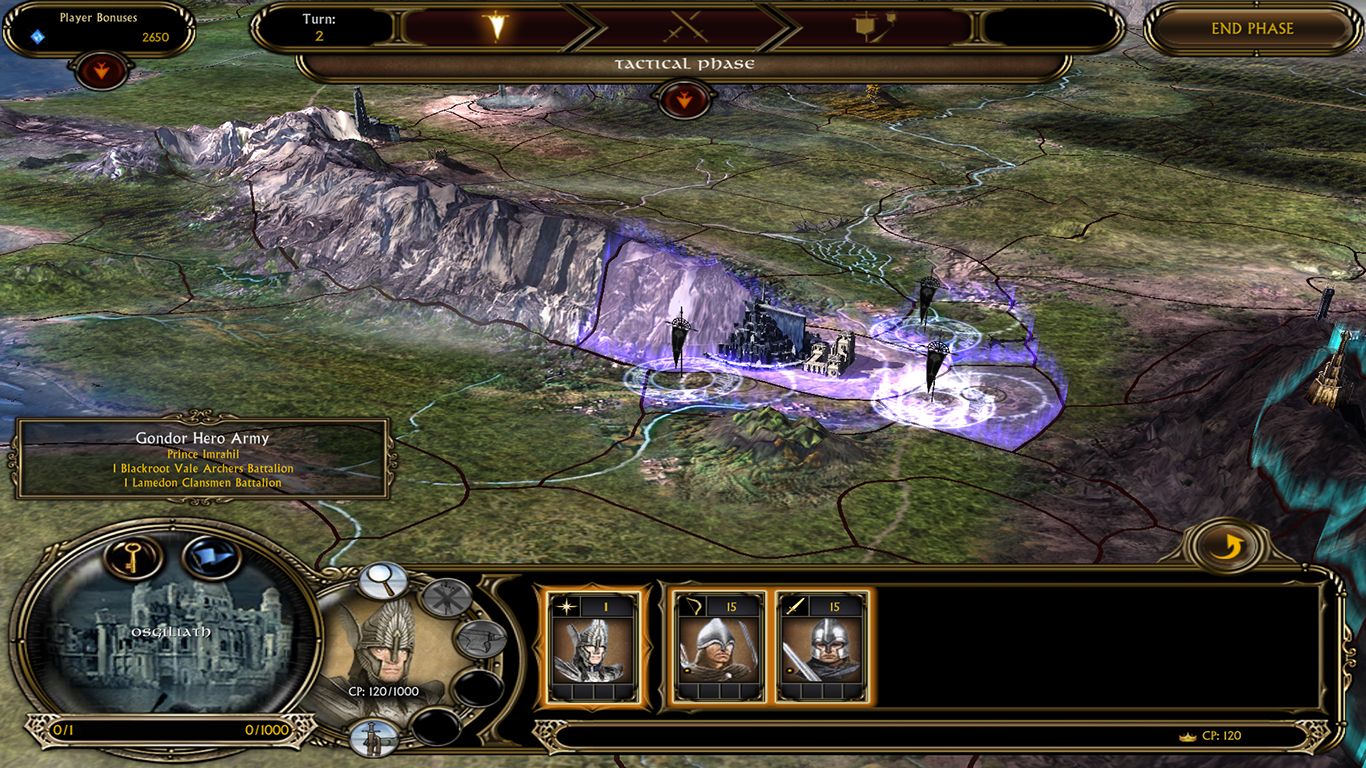 Each faction can recruit a late-game Army Commander from a Living World fortress, to a total of 4 commanders. Gondor may recruit Gandalf the White, Mordor may recruit the Witch-king of Angmar, et cetera. 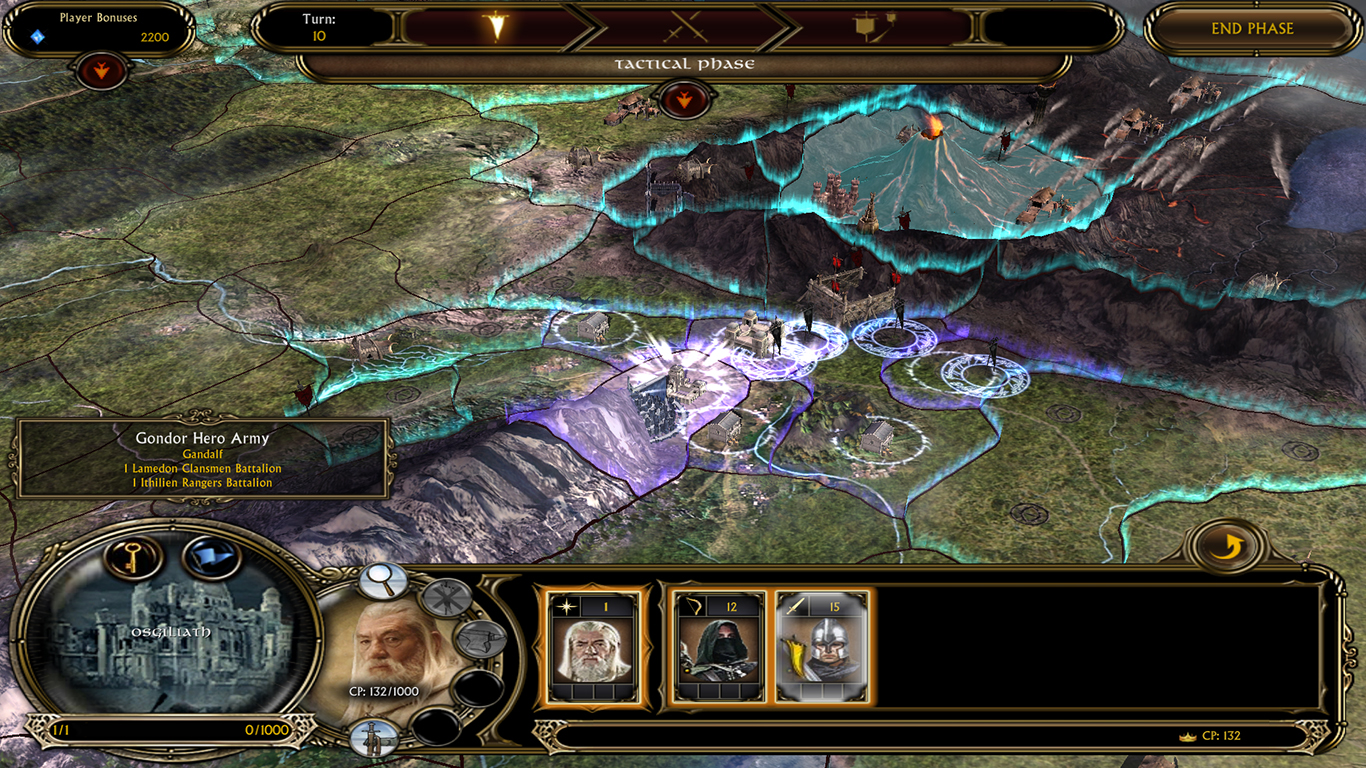 Brush Past and Glance Over Lots of New Details...

Every new region has received a new and unique portrait image, as well as some information about the area. New loading screens for each region are also implemented.

Additionally, new static objects have been added to the Living World, such as Mount Gundabad... 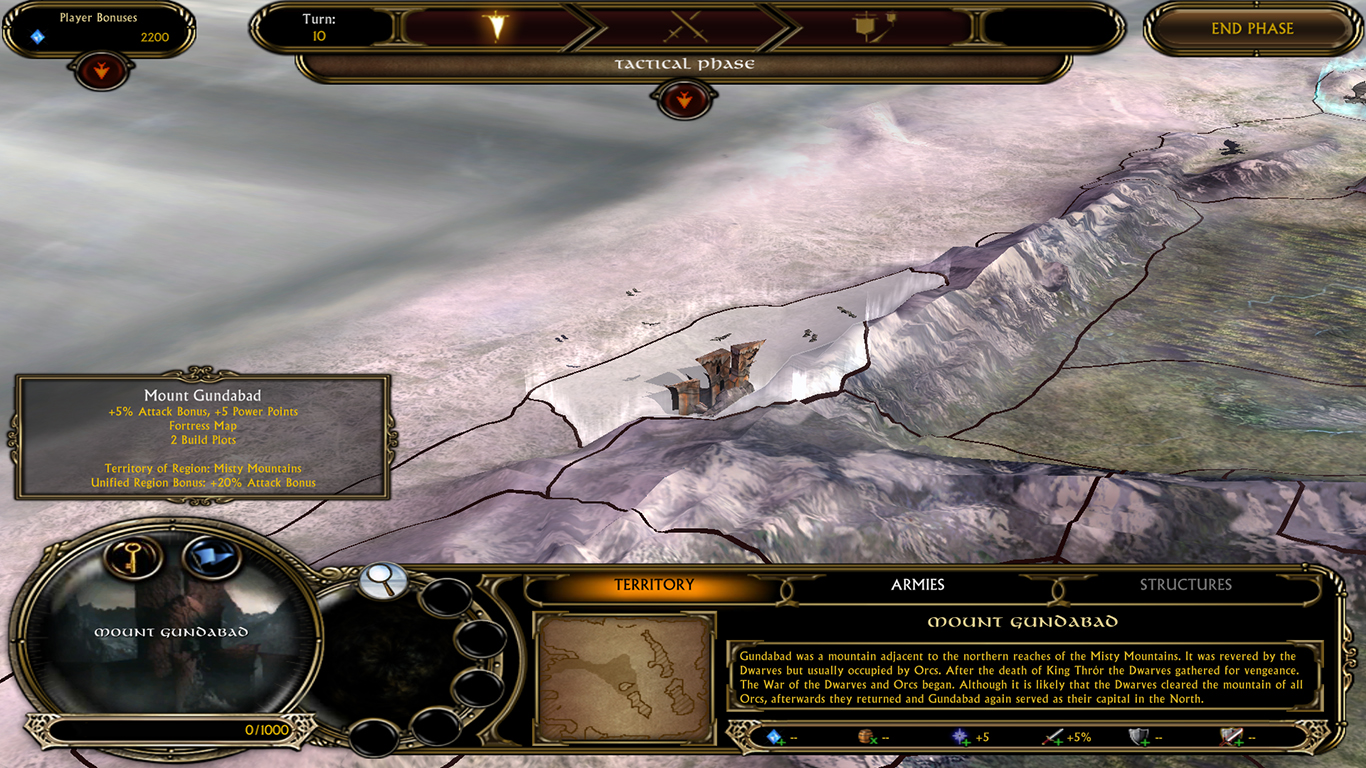 And a flying dragon that might be familiar to some of you... 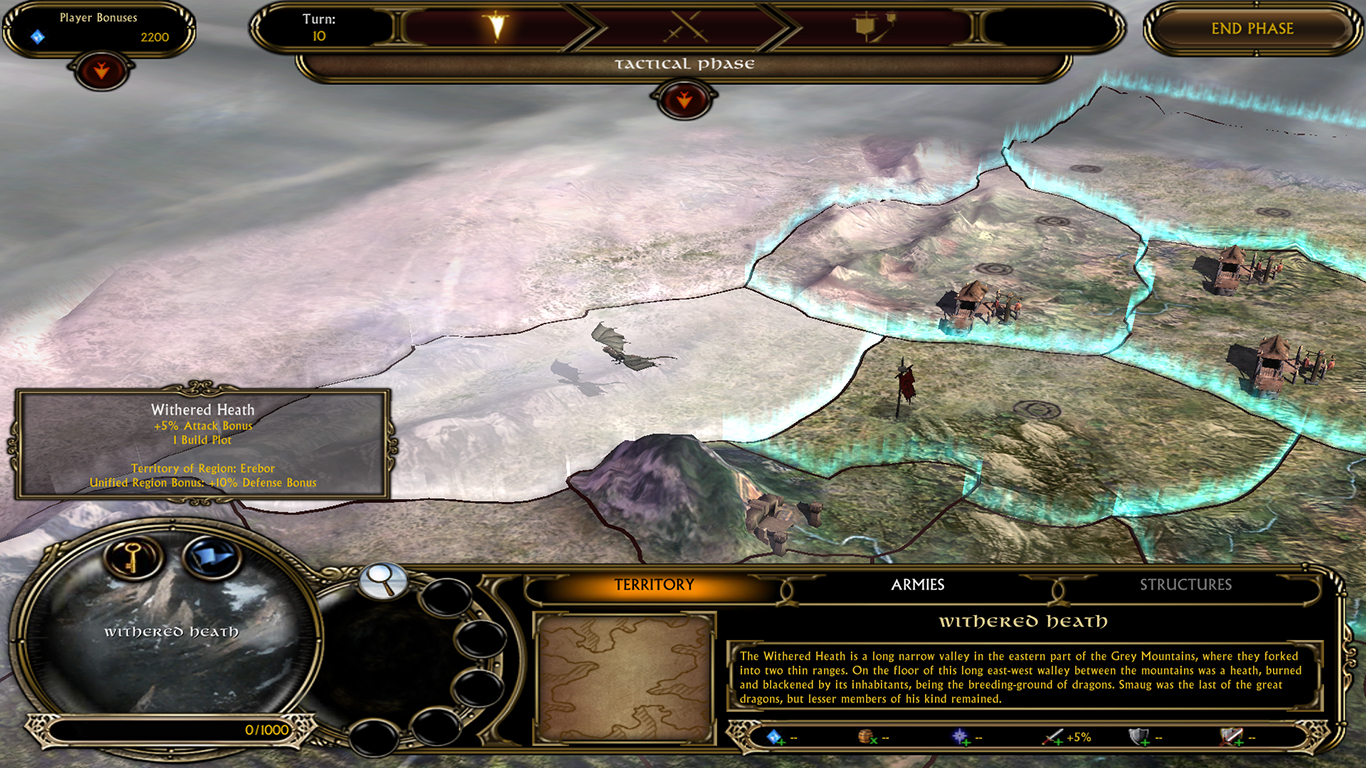 As well as a variety of other things that you'll have to discover for yourselves - once we release the next version!

It looks great! I can't wait to conquer over 100 territories

Though, that might get pretty slow- 12 commanders (3 players on a team) would take 9 whole turns to go through the whole land, and that's not counting battles.

I presume it will still be great. Great work

Are you sure that it's 20 regions across (on average)? If you're calculating by the square root of 100 (minus one as starting region), keep in mind that you can walk 2 regions in 1 turn when they're both friendly^^

The slower the better. A campaign like this should last for a long time. Ever played Total War?

For shorter campaigns they can make Scenarios focused on individual conflicts and only in a certain part of the map.

The board is set and the pieces are moving

Is there going to be a "war of the ring" scenario?

Oh
I'd forgotten vanilla had that

I'll try to script at least one scenario for the next release. I've in mind something Rohan-vs-Isengard oriented

I am so glad Wotr is in next release. Thank you guys for making this possible.

With every update it is better and better!
Pretty amazing job!

Oh damn oh God oh thats beautiful! You could have even add at least one more territory , "Enedwaith" including the whole dunland and basically all the southern part of what you have put as Eriador.

This is looking very very good! Continue the good work!

this is very complete, the war of the ring, I am only interested in one problem, it seems convenient, to place the map of crossroads between osgiliath and morgul, since otherwise to leave the valley of the morgul you would always have to invade osgiliath.

My, my! This looks amazing! Looking very eagerly forward to it all.

Just wow. Finally this mod will be the ultimate in BFME mods. I have to admit, no WotR was kind of a deal breaker for me because I adore the Total War-esque empire management combined with the traditional RTS battles and base building that we see in WotR. And you guys are so talented while WotR was missing out on the potential that has come along with this talent. No more though!

So happy and excited now! Thanks team, can't wait!

Edit: OH EM GEE! I know I already commented but this is so AMAZING! I just can't believe it you guys are actually doing it. WotR is so neglected in the modding scene and yet, imo, is the absolute best mode! Thanks soooooooo much!

Couple of quick questions please. Firstly, will you be including the historical scenarios available in the vanilla game? I think it is cool having more focused campaigns as well as the grand one - eg war in the north scenario maybe.

Secondly, regarding a specific scenario, eventually is there some way to implement the Fall of Arnor vanilla scenario in this mod despite not having Arnor and Angmar in the mod?

Thanks you absolute legends.

To answer your first question, Max said his intention is to implement at least one scenario in the next release - probably something related to Isengard and Rohan. Cheers!

You hear that lads? We're on! Lets give these bastards a good mapping!- The Developers

Amazing work! Thank you so much for finally adding this feature...as it was my personal favorite. WILL WE STILL BE ABLE TO PLAY WITH CUSTOM HEROS? Is really the only big question I have. And...just one minor suggestion. The victory screen was always kind of anti-climactic after hours and hours of conquering. I know you guys have the ability to hype that up sometime down the road. Thank you again for all the undeserved dedication you guys have shown to this modd. It's truly appreciated!

Yes you will still be able tu use custom heroes.
The victory screens aren't a priority for now but maybe someday we'll change them.

Great job, Finally, I looking forward to play this WotR 2.0 ;)
What is new Rohan's unit with hood and bow?

Exciting!! I love WOTR mode and I've been playing it a lot even it its current bugged state haha.

Couple of questions!: -Do we get to keep inn units between battles!? Will they make it onto selection wheels? for example the greenwood warriors for Lothlorian, the Dunedain rangers for Gonder, the legionnaires for the Dwarves? etc
-The Ai is being changed at all? Just because they spend the first few minutes just building resource buildings at the moment on Brutal difficulty and it makes for a rather easy and unsatisfying experience as long as you can overcome the forces they started the map with.
-Lastly, is it possible to increase the amount of teams you can have so its similar to skirmish, I know its thematic for LOTR to have two teams (Good vs Evil) but for replay value it would be great if we have 4 teams each with two players. IDK if that is a possible thing to implement but I thought I would ask.

Thankyou for all your work! You make me so very happy!

As far as my knowledge goes, it's not possible to change the amount of teams in this game mode and we can't have more than six players. As in vanilla WotR, the inn units won't follow your army on the LWM. When you think about it, this makes sense since those are considered as 'mercenaries' and only help you on the map you're recruiting them. This will make even more sense when the inn units will depend on map localization.

Simply put, we will 'only' make WotR function with all the new AotR units and add new regions and new visual features.

So I just downloaded the mod, tried installing and reinstalling a few times but on start-up I keep getting that error that says "Error parsing INI block" that crashes the game. Anyone else seen this?

Hi guys, thank you very much for the work you have put into this mod, it is absolutely fantastic!
I have just a small issue to report that has happened to me 5 times. Whenever I play WOTR with Gondor, starting from Minas Tirith at around turn 2 or sometimes 3 when I command a champion to move into an adjacent territory the game crashes with no error being displayed. Also, when trying to recruit Gondor units from the real world map barracks, the last 2 icons for the units from the right side of the circle, have no image/transparent background with only the circle highlighted.

War of the Ring is not supported in the latest public version (3.1) - so yeah, you'll get errors.

But apart from those crashes when playing Gondor, wotr worked AMAZING, even tried it online a couple of times with a friend. We've been playing it for ~6 hours and everything was just perfect if none of us was played as Gondor :). But thank you very much for your answer and for the hard work you guys are putting into this.

Fu*k yeah...I want this so hard...I am waiting for years for a good working mod with wotr...With this release this mod will rise up as my no.1 mod for rotwk!!!
Until now aotr was at the same lvl as edain for me...but damn, a working wotr *outstanding move*
I am impressed and excited, keep on your godlike work :D

This is insane! Thanks for everything :D

Big question: is it possible at all to support more than 2 players in War of the Ring?

The number of players is unaltered from vanilla, as far as I know. 6 players, I think

This is insane! Thanks for everything.

Big question: is it possible at all to support more than 2 players in War of the Ring?

You guys are great! Thank you very much