Today we are showing off the FM 24/29, the light machinegun that armed the French in 1940.

Today we are showing off a render of the most important weapon for the French Infantry, the FM 24/29 light machinegun. 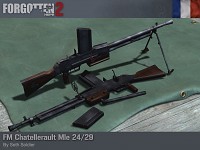 In the immediate aftermath of the First World War, the French began a re-armament program to finally replace the large quantities of obsolete and substandard arms they had accrued before and during the war. Of prime importance was the light machinegun. The Chauchat had been recognised as an incredibly important weapon, but was clearly a design of war necessity. In 1922, the French evaluated a number of existing designs and selected the BAR as their preferred choice. In the end, it was decided to instead go with a domestic design.

Taking a heavy influence from the weapons just evaluated, Lieutenant Colonel Reibel developed what would be finally adopted in 1924 while working for the Châtellerault arsenal. The FM 24 would begin production in 1925, and was soon in the hands of the army. It was well liked by those who used it, but a significant flaw would require all the guns to be recalled. The new 7.5×57mm ammunition was very easy to mix up with German 8mm Mauser, and chambering and firing the latter in the FM 24 would lead to a destroyed barrel at best.

The solution to the ammunition problem was to shorten the case to 7.5×54mm and re-chamber the guns. This would become the FM 24 M29. It would become the primary automatic fire-power for all French infantry and cavalry squads by the start of the Second World War, and served on afterwards into the 1960s. There was a fortress mount modification, and the design formed the basis of the M1931 Reibel that armed French tanks and armoured cars. Our FM 24/29 was made by Seth Soldier.