I've been working on visual improvements. Hopefully I'll do the gameplay convention justice!

So, I thought I'd talk a little bit about the gameplay here; the game is going to be built on a series of if-statements. I'm going to directly wire the gameplay of what happens directly to the save game data flags, which is a hashmap (dictionary) of strings (flag names) to strings (values). So, for example, your inventory starts off as a blank string (""), and adding something to it is just adding whatever the object's name is to the save data's "inventory" key ("pieceofchalk"). When I want to save, I just need to save each flag and its corresponding value out to a file. It's trivial for a player to cheat and change the game, but I don't really mind about that; this game is being made over a couple of weeks, after all!

Anyway, I haven't been doing too much with the actual game development, as some things have come up that could be good for me that I'm working on. Most of the game is writing, though, so just thinking about it is making progress. I've been drawing different scenes and characters as well; the top-right scene isn't finished. 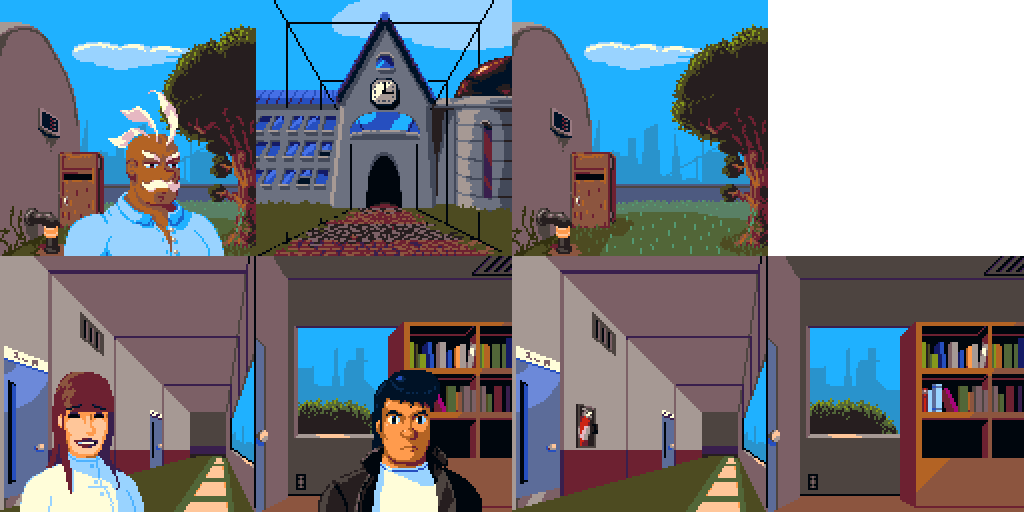 The characters have gotten a bump from 64x64 to 96x96 in their sprite sheet size, and I'm using perspective grids to draw the scenes, rather than going freehand. They're really, really useful to map out and plan the shape of a room. I'd be having a lot more trouble without it, for sure.

Anyway, thanks for watching. Hope the game'll be fun to play!