Short description of basic principles of the game and how we came to these conclusions. Including notes about design, hazards and power-ups.

Update 1 - Visions of the game

Most of the level one is now finished and the road has been a bumpy one. We started the level with the idea on a Maya temple in the jungle and characters being mythological Mayan brothers fighting for souls of the mankind at the end of the fourth Mayan era. 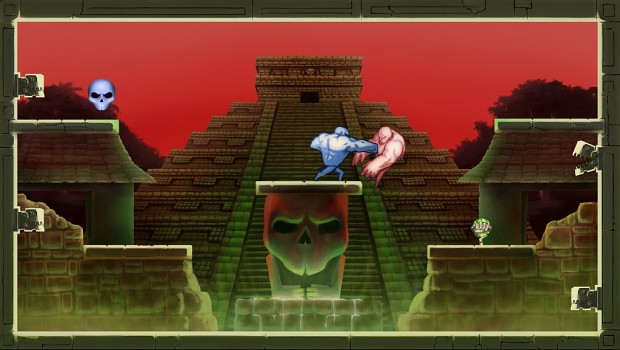 Main idea for us was to combine the easy learning of platformer games to fast paced action of fighting games and of course we would want to add a twist in there. From platformers we brought in the composition of the arena and the location of the camera. Our game would happen on a 2D platformer arena and characters would be fighting against each other there. The twist is that they cannot directly hurt each other. All they can do is to hinder each other and activate hazards on the arena. These hazards can kill the opponent as well as yourself. Characters can shoot or hit each other and while this does not cause any direct injury it does cause knockback and stun.

One of the things that has always bothered me in fighting games is the health meter. From my perspective it is a really bad way of showing who is winning and also leads usually to bad handicap systems that give the worse player more life. This extra life still makes fighting better players suck, because you get your @$$ kicked all the same. So we decided to drop the life meters and make the characters die from one hit. This in itself would make games really short. Since characters are godlike beings, it is easy for them to respawn and continue the fight. Players get point from opponent’s death and in the end of the predetermined time, the player with most points wins the game.

We wanted the game to be chaotic and as fast-paced as possible. We ended up with a simple symmetric level design that would allow fast movement and fast dying. After a while of testing we ended setting the basic round time to 90 seconds. You can intensely concentrate on the game, but still want to play the next round and at the same time you do not feel that the game is too short.

Hazards were supposed to be unexpected and deadly. We made four different hazards that can be randomly activated by pulling a switch. Two of the hazards are local hazards that can be used by players by throwing their opponent into these and two others are hazards that randomly hit different parts of the arena forcing you to keep moving. All of these hazards have a small indicator that warns both players before the hazard strikes. This will allow experienced players to avoid the hazards if they are fast enough.

One of the hazards is made to be the center piece of the whole level. In this first level it is the lightning hazard that when activated will shoot procedurally created lightning to random locations on the arena. Activating this hazard will make it very clear to both players that it is not safe anywhere inside the arena. Lightning forks and covers many locations at once and can strike anywhere. It is also visually very powerful and brings players attention to itself. 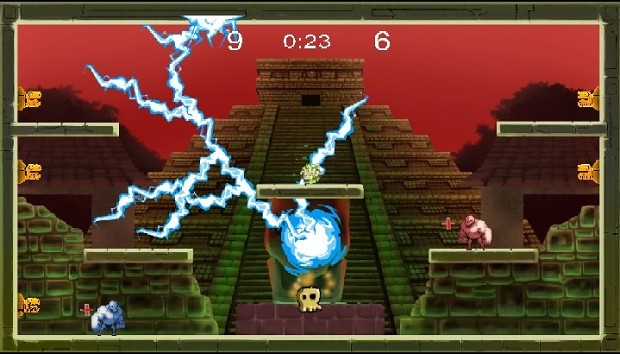 
To make the game more interesting we added power-ups to game. There are four kinds of power-ups that all serve different purpose. Speed power-up doubles characters running speed and jumping distance. This makes it much easier to move around the arena and get to activate switches before your opponent and to avoid hazards. Big problem with this power-up is that this much speed requires a lot of control and if player is not good enough, it might end up being more of a problem than advantage. Death ray power-up changes characters next shot to a lethal one so that you in this case are capable of directly hurting your opponent. Once one player gets this power-up it start a short, but intense game of cat and mouse inside the arena while other player is trying to avoid giving a good shot to death ray. This running around in the arena filled with hazards usually ends quite quickly. Third power-up is called uppercut. With this the characters next strike will cause opponent to fly upwards in 45 degree angle instead of backwards. This angle change will make the flight itself much longer if unhindered and also gives a change to strike your opponent to hazards that would not be otherwise accessible from that position. Last power-up is defensive one. The classic invulnerability gives the character ability to avoid getting hit or killed by hazards for a short time. These four hazards basically touch each of the character mechanics that we have in the game.