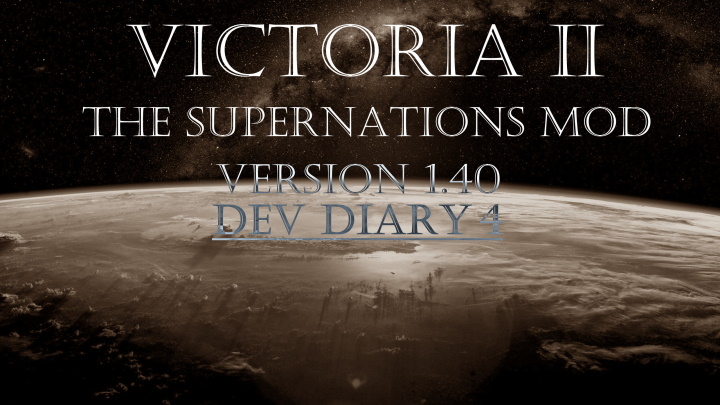 The Victoria II: Supernations Mod brings you its fourth, and likely final dev diary before the final release diary! It has been a while since our last update, nearly two months to be exact. Unfortunately, I ended up being sidetracked by a multitude of different projects and life in general, but progress has been made and the fourth Dev Diary is ready to be shared!

After the American Civil War, the United States enters a period of reconstruction and consolidation. The aftermath of the war proves to be just as interesting as the prior era as well though! Questions on what to do with the now freed slave population loom throughout Congress, new states petition for statehood, the settlement of the Northern Frontiers begin, and new conflicts arise in both Africa and Latin America!

Almost immediately after receiving the more Perfect Union event, interest in settling the remaining, and undisputed northern territories emerge. Despite the lands still being largely inhospitable, the United States remains in a position to completely integrate the uncolonized lands without dispute from the other world powers. After all, there is nobody left to claim the rest of North America besides the United States. 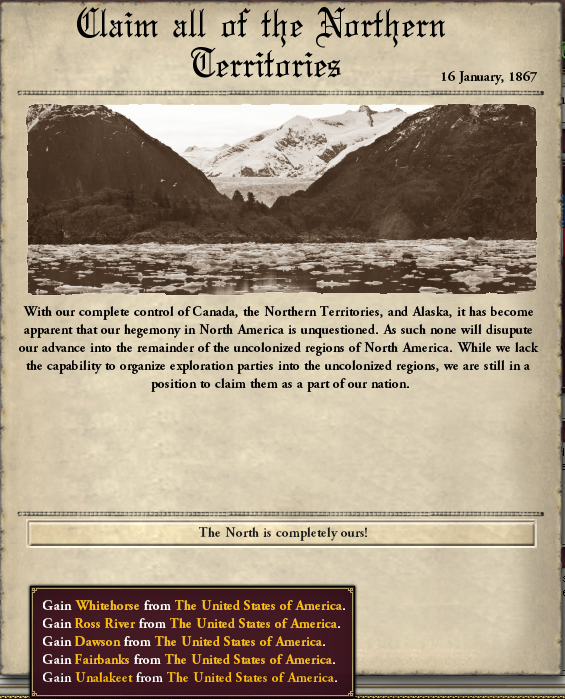 After the Civil War, the question emerges on what to do with the remaining slave populations. In our timeline talk was entertained over whether allowing freed slaves to emigrate to Liberia would be a feasible plan, or whether even creating a new state in Panama would be feasible as well. Two issues remained, however, colonization of Liberia would be difficult to pursue, and the Isthmus was controlled by Colombia. Those two issues could be rectified, however. Emerge the American Colonization Society! 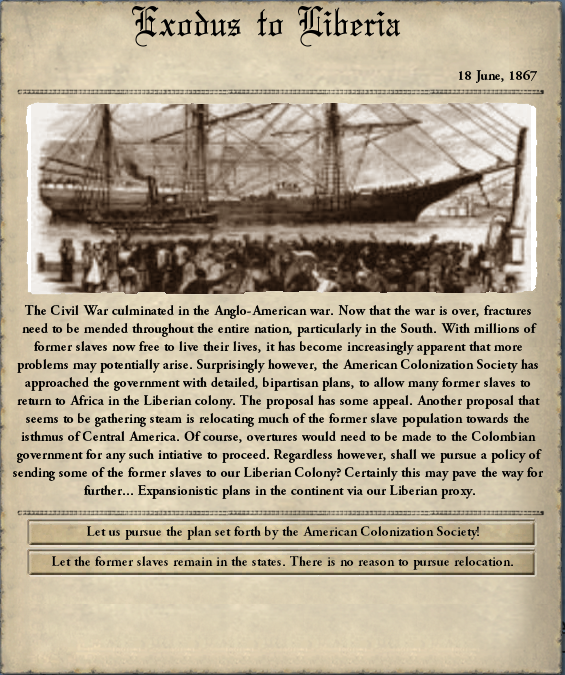 The second option would cause the United States to trod down a path similar to our own timeline, however, the first leads to the creation of a major power in Africa! So, of course, we delve down the path to greater influence within the African continent! The one caveat of this event chain, is, however, that Liberia must still be a satellite nation of the United States after the Civil War. If the player released Liberia prior to the war, then the event chain will not fire.

Within a few months of agreeing to pursue the path laid out by the American Colonization Society, another event will pop up. 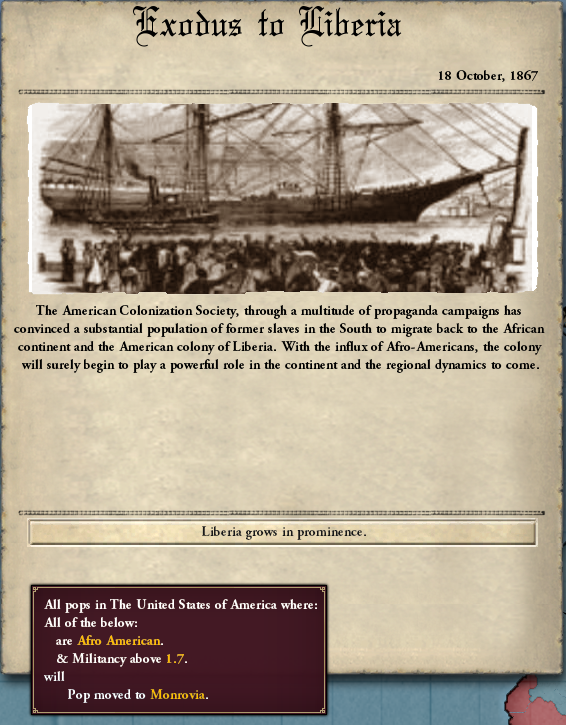 So, why send only militant pops to Africa? Well, it was the only modifier I could find that would restrict the number of pops sent while also leaving enough Afro American's behind to pursue other avenues of reconciliation. However, it works quite well, as certainly only the most distraught members of the freed slave community would wish to leave the nation that had once enslaved them, correct?

So, as such the nation witnesses nearly a million freed slaves to leave the country to Africa, all endorsed by the United States Government and managed by the American Colonization Society.

This isn't all however! Liberia presents a unique opportunity for increased American Imperialism in the dark continent, and while a subject nation in the area, the United States may be capable of initiating a head start against the Europeans in African Colonization, all through their proxy of Liberia!

Liberia, with its massive increase in population, would surely welcome the idea of new frontiers to settle! 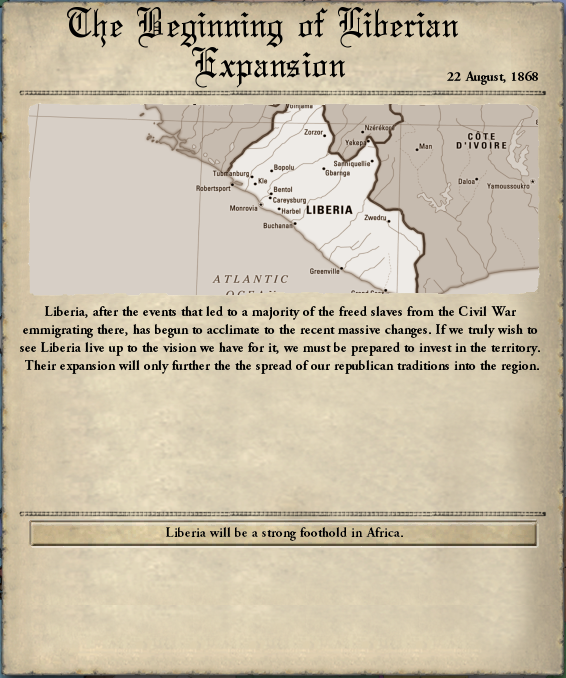 Of course, Democracy and Republicanism must spread! Who better to spread it within the dark continent than Liberia? With the massive inflict of American investment, Liberia is poised to advance its nation into the inner reaches of the continent! Let us explore what subsequently happens, shall we? 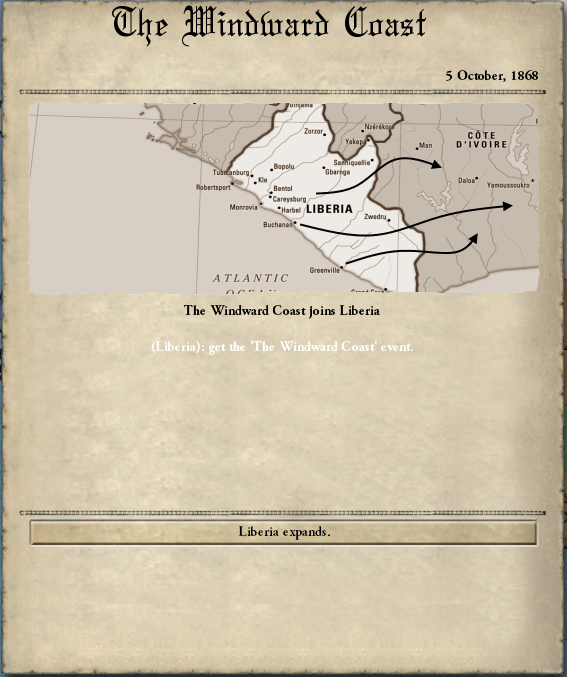 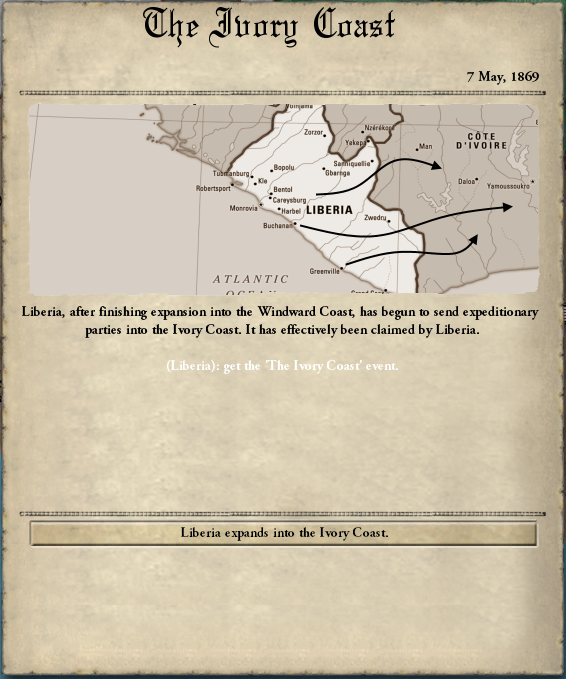 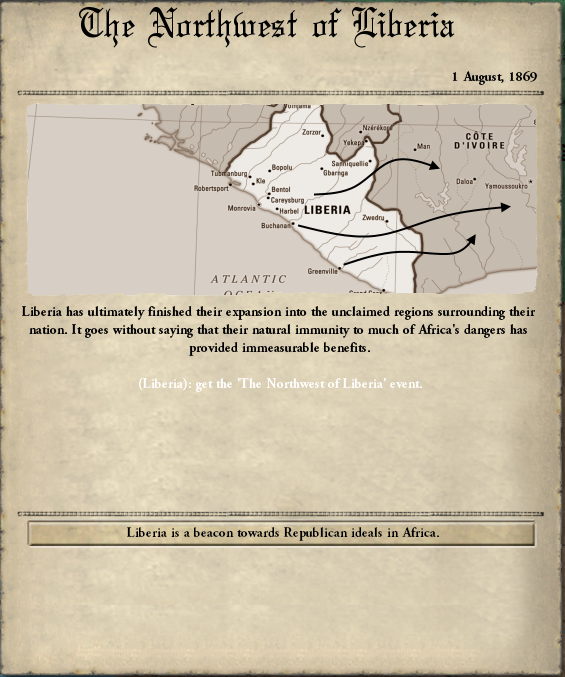 Of course, Liberia's rapid expansion, while permissible by the other European powers, despite the occasional border dispute, runs into a much larger issue when they encounter organized native nations. Predictably a border dispute degrades into a large-scale conflict on the frontiers of Liberia. Fear not, however! American funding has granted the Liberians a massive technological advantage over their primitive neighbors! 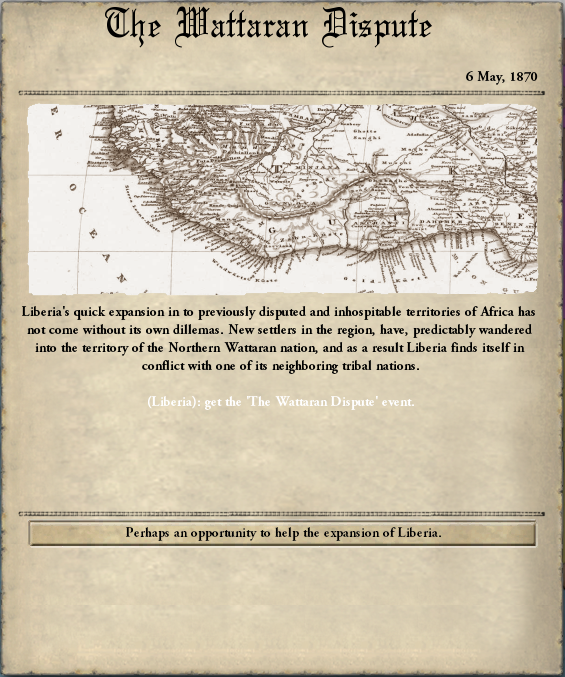 Liberia, at this point, has fully enveloped a large portion of Western Africa. Only time will tell the true effects of Liberia's throes into prominence.

The Isthmus of Central America has recently become an area of increased interest for the expanding United States. With the massive expansion of their nation to encompass the entire east and west coasts of North America, a way to traverse their territories by way of the ocean has become imperative! The Panama presents an interesting geographical opportunity for the United States to build a canal.

The only issue? Colombia has control over the Isthmus, and it appears they will be very much against the idea of selling the stretch of land to the United States; but who are they to say no? 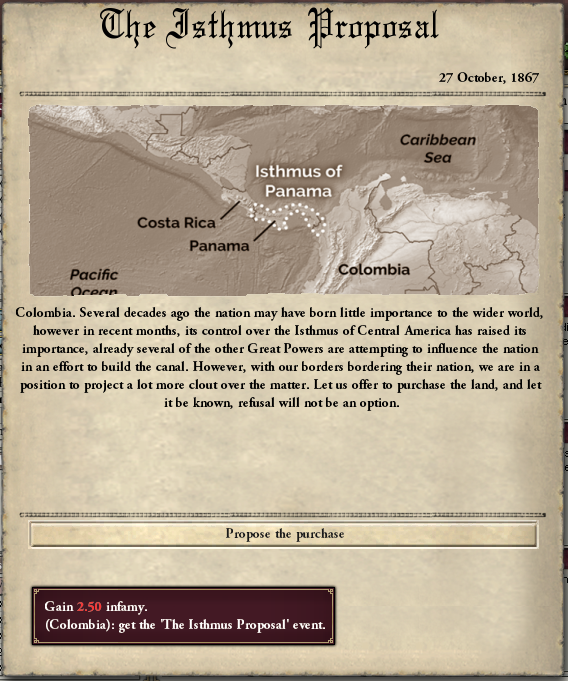 Of course, if they refuse, who are we to say we didn't warn them? 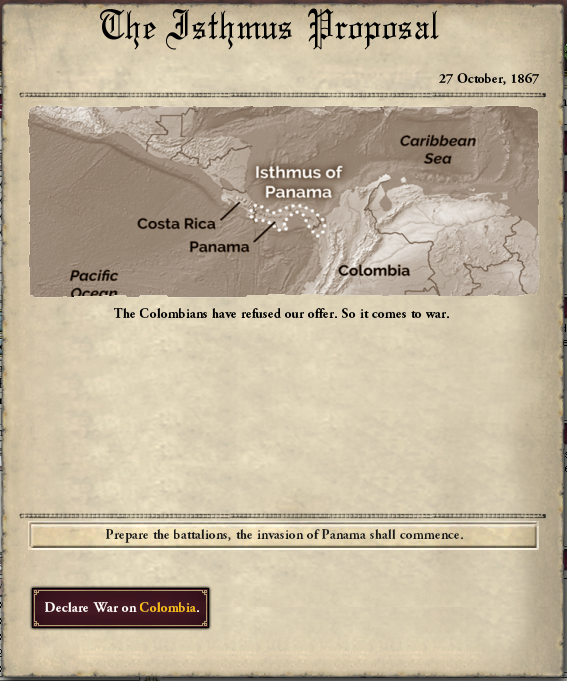 Our superior military might will be unquestionable in the matter! Our victory spells defeat for the Colombians, and the Isthmus will join the United States to perform a greater part in our future plans!

Lincoln envisioned a state to be formed in the Isthmus of Panama, a state that would be lived in and managed by the Afro-American community. This initiative, if pursued, could potentially remove many of the conflicts that would come from integration attempts with the South. We may be able to cut off the racism and violence that pervades the south directly! 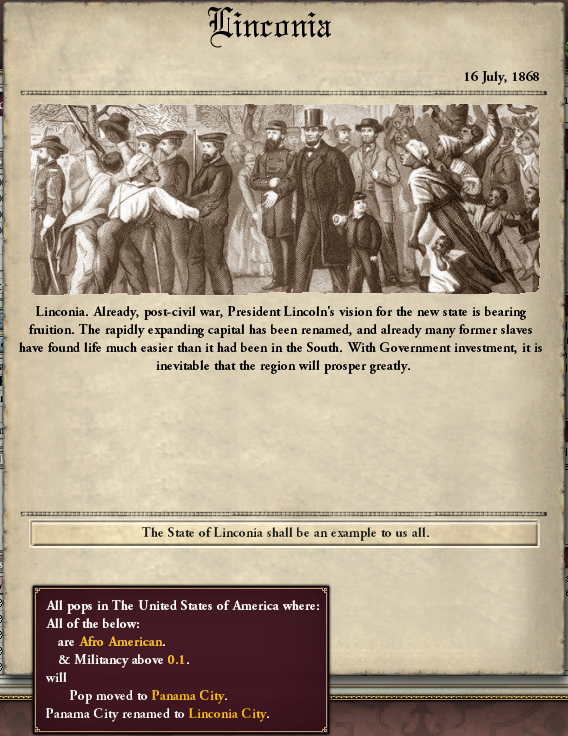 As a result of the decision, any Afro-American's that stayed behind after the Liberian Exodus will then emigrate to the new state of Linconia. Of course, some may wish to remain within the heart of the United States, but many have chosen to move to an area that will grant them an amount of freedom they had hithertofore found difficult to obtain. Long live the Republic!

These several event chains were all incredibly interesting to write, and to be honest, like any alternate history nerd, I am sure we have all wondered what a more Imperialistic United States would have been capable of. My efforts to exemplify that have led me to scour several different alternate history scenarios and potential outcomes throughout history and integrate them into the mod. So I hope you all enjoy this Dev Diary, and I will see you all next time!

Before I finally go, however, I will touch on the timeline for when the public may expect a full release of version 1.40 of the Supernations Mod. My original plan was to release the update at the end of March, but for reasons, I was unable to do so. However, I recently left my current job in preparation to move back to California in just a few weeks. As such I will have a lot more free time and intend to focus quite a bit on the Supernations Mod. I hope the community enjoys it, and once again, thank you all for your support!