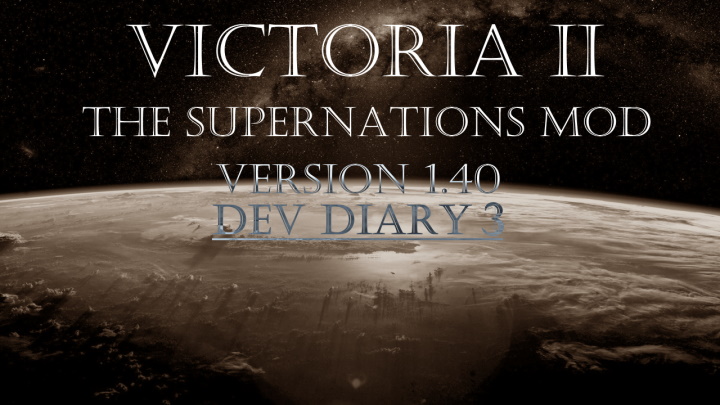 Victoria II: The Supernations Mod brings you its third Dev Diary! Today we will specifically be talking about the American Civil War and its immediate aftermath. Prior to this update, the American Civil War could sometimes be a bit underwhelming; in real history, the United States fielded over a million troops at its peak, while the Confederacy fielded over 300,000 troops. The game typically doesn't have more than 60,000 troops on the Confederate side, and perhaps 120,000 on the Union side. So my first goal was to make the war much, much bloodier. To do this I raised the mobilization size of each of the two countries temporarily at the onset of the war. The United States should be capable of fielding nearly 200 more brigades, while the Confederates should be able to field an additional 60-70. Of course, this typically results in a nearly guaranteed victory for the player if they take preparations before hand, however several other changes have also been made. The Confederacy at the onset of secession will move towards seizing all Union supplies from military forts within the Confederacy, granting it a multitude of military goods. They will also fire an event that converts several brigades worth of Dixie pops to begin rapidly building up a formidable army. Should the player have decided to take the "All of Mexico" decision and conquered all of Mexico, not much has changed there, but Mexico should still be capable of fielding nearly 40 brigades. The next biggest change occurs with the United Kingdom and the Trent Affair. 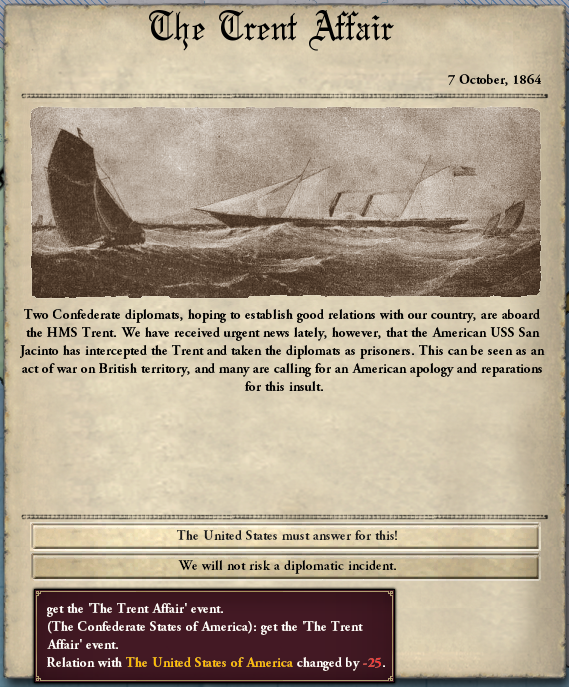 Within a few months after the start of the Civil War, The Trent Affair will fire. While this was represented in previous versions of the mod, the event chain has been dramatically intensified. Should the United Kingdom pursue a cause against the United States, the subsequent event will then fire: 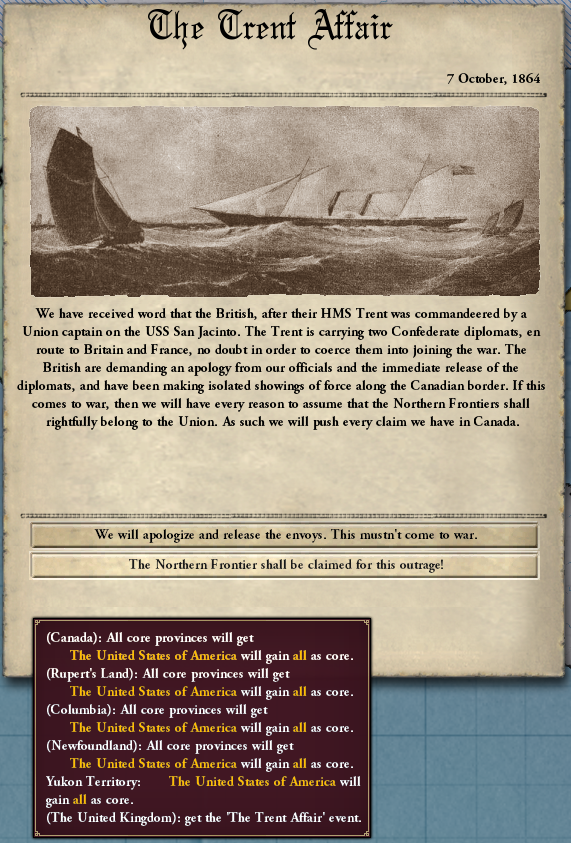 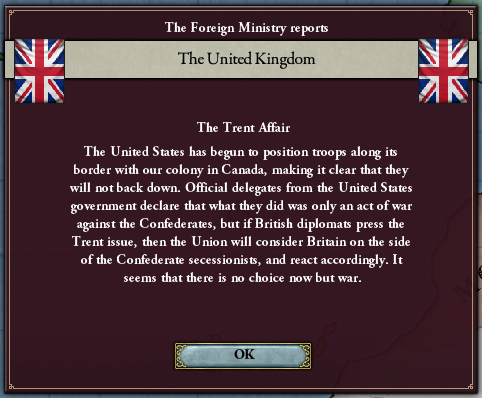 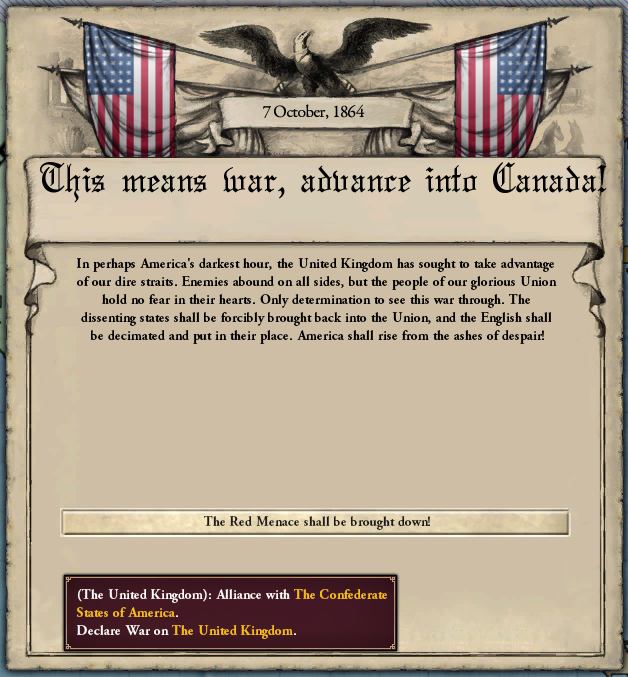 After the war breaks out, and if the player succeeds in securing peace and bringing the Confederacy back into the Union, an event will fire that can pose to bring immediate integration of the Confederate army into the Union Army, in the form of the "Declaration of Union". 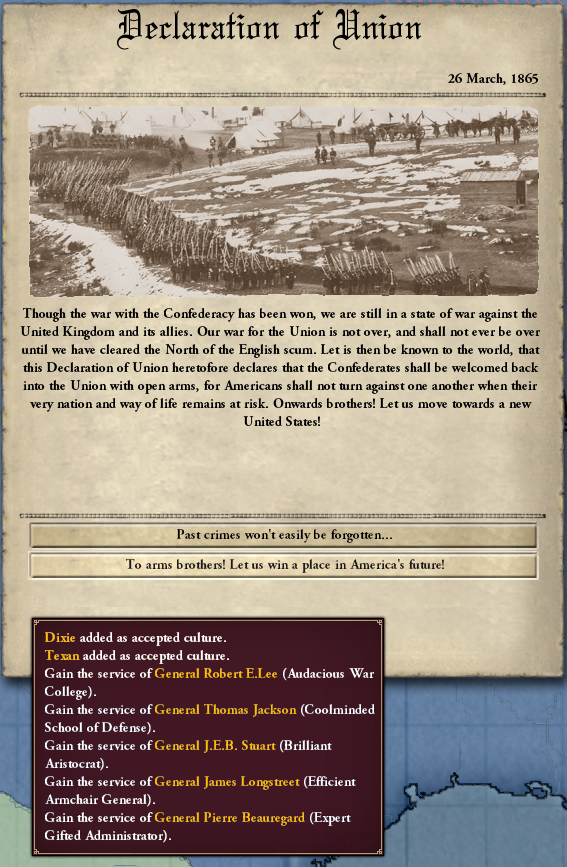 There are two outcomes of the war, either the United Kingdom succeeds in defeating the United States and forces them to capitulate in the American Civil War, granting the Confederacy and potentially Mexico victory. Or, the United States wins, and annexes all of Canada and the Northern Territories into the Union. 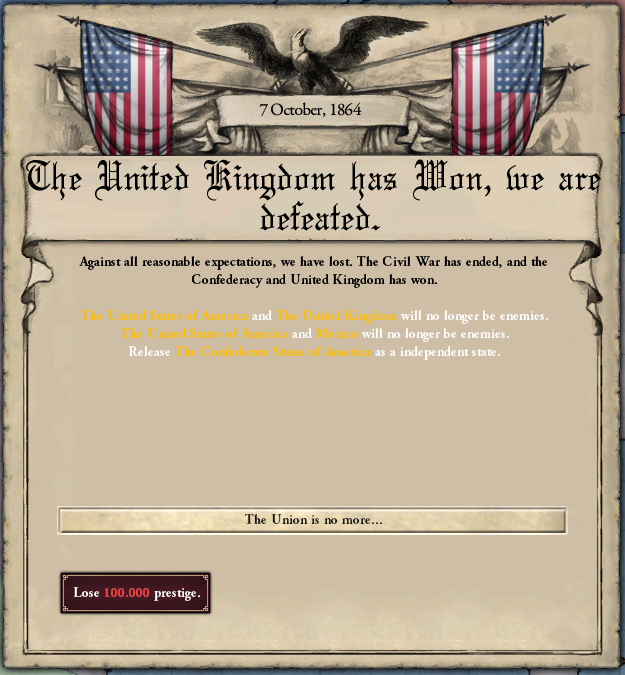 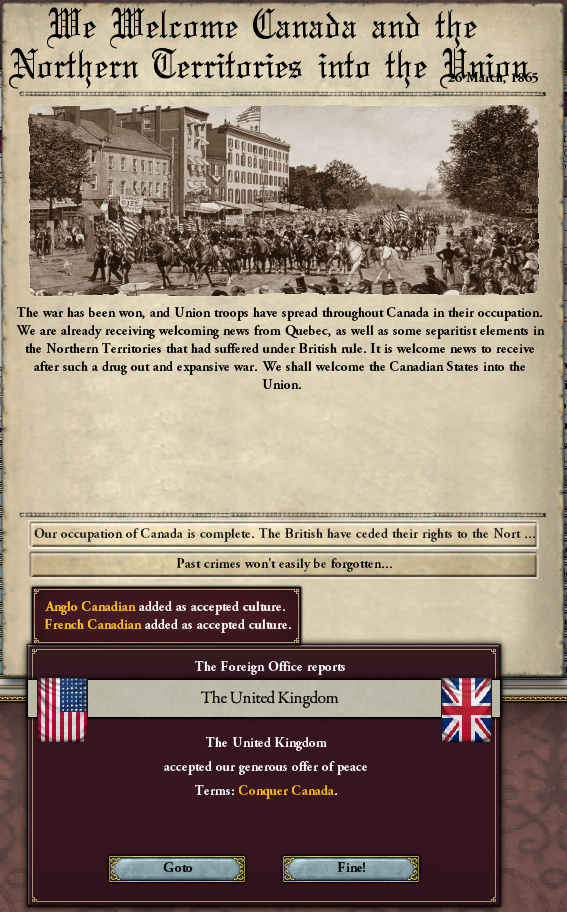 In the event of both peace offers being accepted they will immediately fire either of the two previous events. The United States will have the option to fully integrate the northern territories and its cultures, or they can simply gain a ton of prestige and assimilate them directly the hard way.

After the wars are truly over, and the Confederacy, Mexico, and the Northern Territories have been reincorporated and added into the Union, within a few months another event will fire, that will pave the future path for the United States post-Civil War. Which is titled "Preparations for a more Perfect Union". 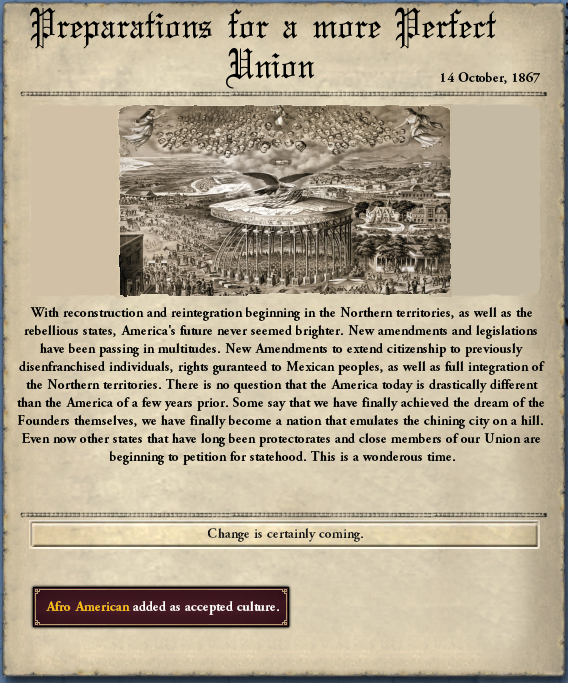 Next time we will be looking at the immediate repercussions of the Post-Civil War era. See you all later folks!