Fairy Tale reaches Version 7. This update is a vast improvement of the mod, merging it with Better AI and also supplying a new Fairy Tale Kingdom to play with!

Better AI and a New Kingdom to play are the major features of this important update.

Think you can beat the Computer!? Fairy Tale has now been merged with Jdog5000's excellent Better BtS AI which actually makes the computer a worthy opponent. Finally, the AI can actually pose a challenge even on the lower levels of play; it works towards set goals and tries its best to hinder the player's progress towards his. Being more terrible and dangerous in wartime and more efficient in peace, you can now watch the Computer show off for once in Civilization. Excellent fun!

Come with us to Fairy Tale Arabia! Say hello to the Kraxantine Sultanate, a new Kingdom based on Middle Eastern/Arabic Fairy Tales. Of course, the new Kingdom comes with all the clichés, such as flying carpets, camels and bazaars, but it's also real fun to play and has some good looking and effective units in its arsenal and several unique buildings. It also makes for a real dangerous opponent to watch out for.

This update has loads more. There are new buildings, buttons and further game balancing and tuning to make Fairy Tale even better than it already is!

The World of Fairy Tale is waiting. 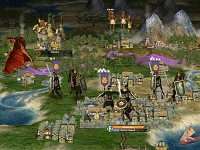 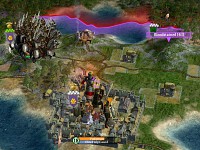 Thanks. Most units are downloadable on the CivFanatics database. Some units are really cumstom-made for this mod too and a whole bunch have received completely new reskins for this mod. To get the landscape to look like this, you need BlueMarble, which makes terrain graphics look cooler.