The next great full version for KW Reloaded is here with new CNC4 material, a tenth faction, 9 epic units to play with, several new upgrades and some fixed bugs and enhancements.

I have taken my liberty to announce the next great version of KW Reloaded where this version of the mod is for players who wanted both CNC4 and KW content. For those who wanted just the KW material shall stick to version 1.5. Will there be patches for just the KW content for version 1.5? I wish, but if I did, it would cause some confusion. For instance, the MP money rules, the tier-3 power plants and the Scrin Armada Destroyer were included after version 1.5 was released.

For those people who have been wondering why the mod is not big enough and I did not include KW maps and the custom music, because if I did, I have to split into three parts of this big mod release. Regarding the power requirement issue for units in all campaigns of C&C3, this is being fixed with all SP maps and will be released as a separate download, if I can do it to apply to all recent versions of this mod. 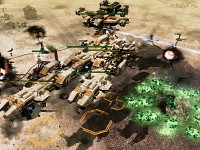 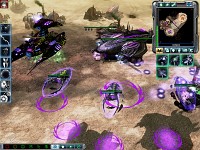 This is the first recent C&C mod with ten factions, and if I added up to 14 factions (which includes all sub-factions and the Forgotten and Russia factions), this mod could be more epic than... Zero Hour, due to a more variety of units and structures to play with and the balancing will become the biggest part of all. Just to remember, when I did this development, version 1.6 and above are to be code-named as Twilight and version 1.5 is code-named as Wrath.

So here are the changes for version 1.6.

Global Changes:
• Added the tenth faction: the Global Air Force (GAF) which consists of mostly C&C4 units. Air Defense Maneuvers is to be a new tier-3 upgrade for the GAF faction which gains 25% more on speed, armor and health. No other new CNC4 units are put into any other sub-faction none other than Steel Talons, Marked of Kane and this new faction. Also fixed the weapon bone position for the Talon to fire correctly.
• Added several new upgrades among all ten factions. See faction(s) change list for details.
• Re-defined color names and modified other defines in the mod.str file.
• The C&C3 X360 Tutorial Map has been re-compiled for faster loading.
• Added three new colors making a total of 20 house colors to choose from in MP/Skirmish mode.
• Changed MP Game Rules: credit minimum at 5000 to a maximum of 100000.
• Changed “Victorious” and “Defeated” messages to “Mission Accomplished” and “Mission Failed”, the way that Westwood did to older C&C games.
• GDI Fuel Depot destruction damage and radius increased. This also applies to the Oil Derrick in a different way.
• Any new units or any sub-faction units that cannot use “call for transport” can now use it without the pre-requisite of a Air Field or Air Tower. This applies to all factions.
• Added tier-3 power structures to all factions. All GDI factions get to build the Power Defensive Grid. All NOD factions get to build the Power Generator. All Scrin factions get to build the Phase Generator. Both the Power Defensive Grid and Phase Generator cost 1500/30 to build with 500 power gained. The Power Generator gains 1000 power when built.
• Added selected C&C4 and RA3 neutral structures usable with the C&C3 WorldBuilder. All have sounds.
---Tiberium Control Network provides 200 power and gains credits (500 credits per 15 seconds).
---Tiberium Spike Tower gain credits, just like the original Tiberium Spike, but gains 25 credits per second.
---Uplink Tower provides a full open view of the battlefield.
---AA Turret is a defensive structure against enemy aircraft.
---Artillery Turret is a defensive structure against enemy units.
---Defensive Tower senses incoming troops from afar. Also detects nearby stealth. (sub. for Sensor Array)
---Frontal Tower provides 200 power with no upgrades.
---Garage heals nearby vehicles at 1% per second.
---Hospital heals nearby infantry at 1% per second.
---Observation Tower provides a partial open view of the battlefield.
---Oil Derrick provides 200 credits per 10 seconds. When destroyed, it explodes on a medium radius around it.

Steel Talons Changes:
• Added a new upgrade called Overkill, which increases the rate of fire and range by 25% to most Steel Talons ground vehicles and the Kodiak, as a tier-3 upgrade.

NOD Changes:
• Fixed an issue where Banshee and Armageddon Bomber cannot return to the Hangar when out of ammo.
• Tiberium Core Missiles is added to be a tier-3 upgrade for all Nod factions. This upgrade increases 25% more damage applying to Attack Bikes, Stealth Tanks, Mantises and Rocket Turrets. Applies to all factions.
• Demo Truck cost reduced to 3000/30 and can be built unlimited. Weapon changed from a nuke to a normal grenade suicide bomb and damages 5000 hit points in a 500 radius on anything whether if it’s friendly or foe. Attack is similar as a Fanatic. When destroyed or crushed in battle, the damage is the same as the attack.

Black Hand Changes:
• Charged Particle Beam is added to be a tier-3 upgrade which gains 25% more damage from Elite Confessor Squad, Venoms and Shredder Turrets with charged particle beams.
• Fixed an issue on the Purifier’s animation when Purifying Flame is upgraded.
• Redeemer is now armed with Rocket and Flame turrets.
• Removed EMP Blast upgrade and Master Countermeasures from this faction.

Marked of Kane Changes:
• Supercharged Particle Beam is added to be a tier-3 upgrade which increases attack damage by 25% applying to the Enlightened, Venoms and Shredder Turrets. Offensive Capabilities upgrade is now restricted to Scorpion Tanks, Tyrant Tanks, Avengers and Salamanders. EMP Blast upgrade moved to tier-2. Master Countermeasures ability removed from this faction.
• Added back Cyborg Reaper, Cyborg Commando, Avenger Tank, Tyrant Tank and Rocket Pods to this faction. Some upgrades are now applied to them. Tyrant Tank can now use the EMP Blast ability. Cyborg Commando now gets to attack with a powerful plasma cannon and can also use the EMP Blast ability.
• Tiberium Trooper now has the Cybernetic Legs upgrade. Attack damage increased slightly.
• Redeemer is now armed with Rocket and Tiberium Stream turrets.

All other changes and credits are mentioned in the readme PDF file.

Any issues with the mod, please comment below here and I'll look into it.

Having 10 factions is so crazy, this has been a lot of work for an overhaul I suppose! I hope there are enough players.

Well the sad news is that C&C3 does not support 10 players in a MP game.

i dont understand i can't find Armada Destroyer(traveler-59) in game /is it problem downloading from desura?

It's in the aircraft tab once you build a Gravity Stabilizer.

i know but only build carrier and original unit (only different thing is life form tower?)

If I put three units into the APC, I can only unload one afterwards. The other two units will stay inaccessible inside forever.