The full version for KW Reloaded is here with all nine playable factions, 14 new upgrades, a new gameplay system and an unstoppable Kane.

I am proud to announce the full version of KW Reloaded 1.5 for the first time since beta version 0.7. This version of KW Reloaded is for players who wanted just the KW content. For those who wanted the rest of the content will have to wait for version 1.6. Developed since Bibber's first release of the C&C Asset Extractor tool in September 2010, the time it takes to develop this awesome mod took me more than two years and I couldn't be more proud to have achieved this further than some C&C modders. 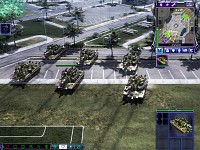 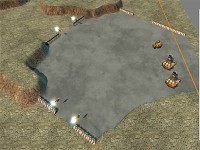 This full version for KW Reloaded features a new gameplay system, all nine playable factions, 14 new upgrades and some replaced and new content. Despite attempted on getting the skirmish AI working ingame and failed several times, I regret to inform you that feature won't be available in this version. However in order to make that to work, all C&C3/KW skirmish maps will have to be modified to set the skirmish AI to work with those sub-factions, and if they do work sometime in a later release it might happen, but then the release will be much bigger.

So here are the changes for version 1.5.

Global Changes:
• All C&C4 units (except Ironback, Scrapbus, Sandstorm, Mastodon, Kodiak and Salamander) are not available to build in this version (for those users who wanted to play the KW way).
• Added Black Hand, Marked of Kane, Reaper-17 and Traveler-59 sub-factions into the mod.
• Added 14 new upgrades (most from KW) throughout all nine factions. See faction changes for details.
• Multiple queue building is now working for all structures and defenses with a limit of 10 per queue. Build times for some structures, infantry and vehicles have increased.
• Power usage is now set to Red Alert 3 standards. All Construction Yards are given with 50 power units. Power upgrades now need 20 seconds to research from all power plants and they no longer need a prerequisite.
• All vehicles (except MCVs and base expansion units) now require power to build. All harvesters and carryalls require 5 power units, most tier-1 and tier-2 vehicles require 10 power units and most tier-3 units require 15 power units. All epic units require 50 power units.
• Most units now have a limitation of 50 units (for each unit type) on the field. MCVs, Surveyors, Emissaries and Explorers have a limit of 10 on the field each.
• All infantry (except Commandos and Engineers) cannot detect stealth. Besides stealth units, epic units and defense structures that can detect stealth, the only other units that can detect stealth are Pitbull, Orca (with pulse scan), Attack Bike, Venom, Seeker Tank, Stealth Tank and upgraded Avatar (with stealth commandeering).
• Added a temporary new unit to the Mutant Hovel: the Mutant Rhino Tank (which happens to be a Soviet unit)
• Replaced Predator Tank, Mammoth Tank and Light Tank weapon fire sounds from Red Alert 1.
• Replaced Glorfindel, Light Tank and Zone Stalker voice taunts from C&C2 and RA1.
• All refineries, cranes and foundries require Power Plant or Reactor to build.
• All units in all factions (except Steel Talons) can now use “call for transport” without a pre-requisite.
• Placing mines now cost 300 with a cooldown of 45 seconds.
• GDI/Nod Commandoes and Kane can now use C4 explosives on certain vehicles (i.e. Predator, Slingshot, Shatterer, Mammoth, Scorpion Tank, Flame Tank, Beam Cannon, Specter, Manta, Devourer Tank, Corrupter, Manta, Defiler, Zone Shatterer, Titan, Sandstorm and all types of Harvesters)
• Added back Africa, China and Russia civilian objects and KW neutral objects usable within the C&C3 WorldBuilder.
• Modified the mod.str file for updated descriptions with the 14 new upgrades amongst nine factions.

GDI Changes:
• Added new upgrades: Hardpoints (cost 2500/60 -- to Orcas, Zone Orcas and Firehawks), AP Ammo (cost 2000/60 -- to Riflemen Squads, APCs, Hammerheads and Watch Towers), Tungsten Ammo (cost 1500/45 -- to Slingshots and AA Batteries) and Vehicle Bombardment (cost 5000/90 to Predators, Mammoths and the MARV). Both AP Ammo and Tungsten Ammo upgrades increase attack damage by 25% for those units. Those new upgrades (except Vehicle Bombardment) also apply to the ZOCOM faction.
• Bug Issue: Firehawks can only get Hardpoints upgrade only if they are built first with an armed weapon manually given. But if you switch loaded weapons after the upgrade, the upgrade disappears to that Firehawk.
• Sharpshooter Team support power cost reduced to 3200.
• Due to a new power usage, Watch Towers require Power Plant in order to be built. (Applies to all GDI factions)

NOD Changes:
• Due to a new power usage, Shredder Turrets require Power Plant in order to be built. (Applies to all NOD factions)
• Added Quad Turrets upgrade (applies to all Nod factions). Cost is 1000 in 30 seconds.
• Bug Issue: SAM Turret hub animation will not show up the quad turret after the quad turret upgrade is complete. If the defensive structure is built before the upgrade, the quad turret will exist on the hub.
• EMP Coils upgrade cost increased to 1500 due to the useful Kane unit.
• Master Countermeasures now costs 300 credits to use.
• Changed Tiberium Silo models from Madin so they can look different from GDI. Applies to all Nod factions.

Black Hand Changes:
• Added new upgrade: Purifying Flame (costs 3000/60 and increases attack damage by 25% for all flame units)
• Bug Issue: Purifier animations stop working after the Purifying Flame upgrade when either created or on the field.
• Venom cost increases to 1000 due to its charged particle beam weapon.
• Purifier, Flame Tank and Black Hand can now fire correctly with blue flames.
• All balance changes to this faction are included from BMRT version 1.3.

Marked of Kane Changes:
• Added new upgrades: Offensive Capabilities (costs 3000/75 and increases attack damage and rate of fire to Enlightened, Venoms, Shredder Turrets, Scorpion Tanks, Stealth Tanks and Salamanders by 25%) and Structural Defense (costs 2000/60 and increases armor for all structures by 25%).
• Cybernetic Legs upgrade moved to Secret Shrine. Cost and research time remain.
• Venom cost increases to 1100 due to its supercharged particle beam weapon.
• Salamander is now improved with the correct animations and weapon bones. Build limit on the field is three.
• All balance changes to this faction are included from BMRT version 1.3.

Scrin Changes:
• Due to a new power usage, Buzzer Hives require Reactors in order to be built. (Applies to all Scrin factions)
• Added new upgrade: Boosted Power (to Gun Walkers, Seeker Tanks, Devourer Tanks and Mantas). It costs 3000 to upgrade in 60 seconds and increases attack damage and armor by 25%. (also applies to Reaper-17)
• Corrupter can now place mines on the field. (Also applies to R17 and T59 factions)
• Mastermind now has a restriction to manipulation control from sub-factions.

Traveler-59 Changes:
• Added new upgrades: Composite Alien Armor (cost 4000/75 to upgrade and applies to Disintegrators, Shock Troopers, Ravagers, Cultists, Mastermind, Prodigy and all shielded vehicles) and Structural Defense (costs 2500/60 and increases armor for all structures by 25%)
• Added Assault Mothership (epic unit to replace Eradicator and Mothership) and Defiler into the faction. Assault Mothership costs 6000/60 and requires Signal Transmitter to be built. Defiler costs 1500/15 and requires Technology Assembler to be built. Note that the Defiler weapon animation still needs some work. Defiler weapon used from the Devastator Warship is temporary.
• When Assault Mothership is destroyed, it unleashes temporarily a big ion storm on the field, killing enemy units.
• Mastermind and Prodigy have a restriction to manipulation control from sub-factions.
• All balance changes to this faction are included from BMRT version 1.3.

A developing 10th faction is already in the works for version 1.6 called the Global Air Force (GAF) (a GDI sub-faction of the supporting class) and will feature mostly C&C4 units, including the upcoming Archangel and Argus units. The finishing touches for version 1.6 (the mod itself) may finish before the first day of Winter, but the Skirmish AI and modified maps will give in extra time. The changes for version 1.6 will be added by the time you read this.

"However in order to make that to work, all C&C3/KW skirmish maps will have to be modified to set the skirmish AI to work with those sub-factions, and if they do work sometime in a later release it might happen, but then the release will be much bigger."

Can't you just release a separate map pack where the Skirmish AI has been enabled for the subfactions?

Good question but, even The Forgotten mod somehow had all of those maps modified and integrated into the mod to set skirmish AI working for a new faction. Putting the maps separately from the mod and then releasing it might not work to the mod. Besides I am still planning to get in the new free camera feature from C&C3 A New Experience to all maps.

Liking the update, personally awaiting 1.6. Thanks for all of your hard work to bring us this mod! :)

Waiting for 1.6 too.I prefer KW to ONLY KW mod.

I noticed the Reckoners still cannot deploy to bunker, is this planned or impossible to do?

It's possible, but I don't have the knowledge to do so.