New version of the Titanium Wars Mod for Soulstorm with Gargant (!!!) on board. GrOrc's dream has come true... Now grandfather of all DoW-mods with Titans has greatest uber unit for Orks! 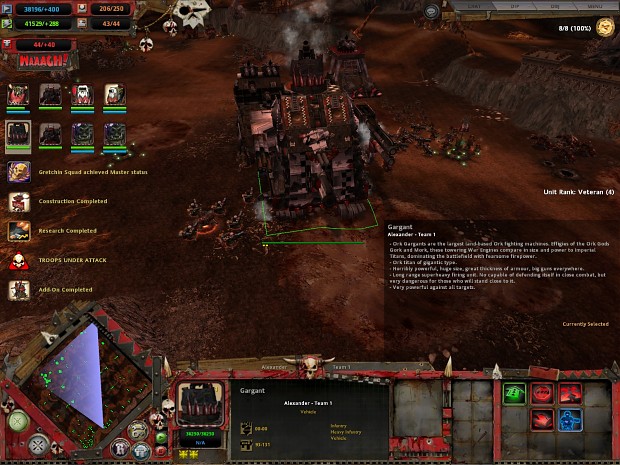 - !!! Greatest news within Titanium Wars Mod !!! Gargant was made. 3D-model and textures from BoyChaos. Very old his work, it was made in 2012. Additional work (lots! huge! time-eating!): additional 3D-corrections, new animations, OE-code, and gameplay realization from GrOrc. My work over it was started 11 May 2019. This unit in game since 17 May 2019 (technically). 18 May 2019 my first ordinary game with this ready unit from my hands. :) Congratulations! Orks celebrate!!! This day is happiest for them in the Titanium Wars Mod!
- New lesser hero for Orks -- Weirdboy, Orks' psyker. Limit 2. Available in Headcrushaz Banner. Can use abilities: Zzap, Frazzle, Warpath, 'Ere We Go. He unable to use his abilities without enough numbers of other Orks nearby. 3D-kitbash, new animations, OE-code, and gameplay realization from GrOrc.
- Mega Armored Nobz can be teleported over the battlefield now (with hero).
- Mad Dok from honour guard (in campaign) was renamed to Da Best Dok, and he have new ability Healing Juice. Provides temporary bonus to health regeneration rate of the Ork boyz or Squiggoth. Ordinary Mad Doks have no such ability.
- Necron Annihilation Barge model and textures were updated by BoyChaos. OE-code and some other additions in 3D were updated by GrOrc.
- Great update for Eldar Autarch. Now TWM have new model which is essentially reworked old unfinished model 2010. Many new anims, huge OE-code, and gameplay realisation from GrOrc. Now TWM has four type of Autarch: Autarch Scorpion, Autarch Banshee, Autarch Hawk (with Swooping Hawk Wings), and Autarch Skyrunner (on jetbike). All Autarchs can use grenades. Each Autarch has interesting weapon upgrades via TWM-wargear system. Some of them are essentially new.
- Significant update for Swooping Hawk and Swooping Hawk Exarch. Fixed some 3D bugs in 3D-geometry. Swooping Hawk Exarch wings are animated now. New aims-anims for these units which allow them shoot on any angle (360 degrees). Now Swooping Hawks are true assault units. In addition Swooping Hawk Exarchs can replace Hawk's Talons with a Sun Rifles (3D design from GrOrc).
- New system of Grav Platforms. Now all small Grav Platforms can be built separately. List of small Grav Platforms: Shuriken Cannon Grav Platform, Scatter Laser Grav Platform, Starcannon Grav Platform, Missile Launcher Grav Platform, Bright Lance Grav Platform. All of them have cumulative cap 10 now. Moreover small Grav Platform model was reworked in 3D by GrOrc, and now it can rotate its turret 360 degrees. Therefore small Grav Platforms can fire in move now on any angle. D-cannon Grav Platform, Shadow Weaver Grav Platform, Vibrocannon Grav Platform have cumulative cap 6 now. Any Grav Platform requires squad cap 1 only. This is true infantry support now.
- Shining Spear Squad uses support cap 2 (old value squad cap 1 and support cap 2). Can use grenades now. Their jetbikes can be upgraded with Shuriken Cannons.
- Reworked colour scheme for Eldar Jetbikes.
- Arbites and especially Arbites Fire Support models were updated. Arbites Fire Support has correct all aims and able to fire in movement with shotguns now. And they has sinc-kills now. And some other improvements.
- Imperial Missionary is able to fire in movement now (with his shotgun). OE-code was updated.
- Adeptus Astartes Candidates are able to fire in movement with shotguns now.
- Three new units for Administratum race in Chaos Renegades doctrine: Apostate Preacher, Rogue Psyker, and Enforcer:
-- Apostate Preacher is corrupt priest. Has passive abilities like other priests in the TWM. In addition he has ability Battle Fury.
-- Rogue Psyker is very dangerous untrained psyker. Has abilities Psychic Lash and Lightning Arc. Can attract daemons from Warp and easily become possessed by them. The Psyker dies as a result of the unsuccessful using of his psy-abilities, and a Warp Portal appears. Lesser Daemons and even a Greater Daemon able to come from Warp through this hole to Immaterium. By this feature of Rogue Psyker, player can receive daemonic squads (the same daemonic squads as within Chaos race).
-- Enforcer is strongman, appointed as overseers within the ranks, forcing the men to fight and follow orders, often at gun point. Has ability Execute.
- New taskbar for Administratum race. Thanks to Obsorber for his good 2D-art work. Also great thanks to him for textures of Apostate Preacher and Rogue Psyker.
- Exorcist tank uses support cap 3 now.
- Penitent Engine uses support cap 3 now.
- All lesser daemons' OE-codes were updated (for future project). Horrors able to uncapture strategic points now.
- New special rework of Heroes scar-script. Builder Scarabs level 7 (and + 1000 EXP) are automatically transformed into Ancient Builder Scarabs. Also another new feature was made: reworked Heroes scar-script checks if a unit could be transformed (via possess mechanizm only), and if is it true, then experience will be trasferred to transformed unit. In the TWM for SS this new feature are used only for these pairs of squads: Chaos Lord - Demon Prince, Saint Celestine - Saint Celestine with Katherine Armor, Archmagos - Archmagos Prime, Hell Stalker - Orbital Stalker. Also another new feature: units level info is visible for all players now. And great new feature: units' level info and attached units' level info are shown on taskbar now! And with tooltips! Thus the levels are not just abstract words and numbers, but now it is detailed element of legend of the game. The old levels' counter (in the combat screen) was preserved, and it can be shown/hided by clicking on the words about the levels in the taskbar.
- In addition to previous item. Special rework of Heroes scar-script especially for Farsight Enclaves: detached Commander Drones take level from Commander-owner.
- Fixed bug with AI Donations scar-script. Now AI Donations works after save-load procedure.
- Fixed sound for Griffon Mortar Tank and Hydra AA tank.
- Some other very important changes.
- UCS-files were updated. Huge update with new references to the legend of the W40k-universe.

- Fixed bug with non-working save procedure in TWM-SS-campaign within Dark Eldar stronghold. Thanks to AVAT4R and SHADOWRanger for reports.
- Some other changes.
- UCS-files were updated.