Hitpoints have been recalculated and CR has been implemented.

You can still access the Indiecade version at: Daring Adventure - Indiecade Version.

We are skipping the desktop exports for this version.

We noticed that in some cases the hit points were a little bit buggy. I had a fit with a 6 hitpoint viper that withstood 30 hitpoints of damage. Instead of having to go through every single card individually to adjust this, we decided to change around the hitpoint calculators. With this new calculator, the hitpoints are assigned to the card immediately after the spawn. This affects both heroes and monsters. It should stop any further occurrences of super snakes.

Recall back to when the map nodes were released. We showed you this screenshot: 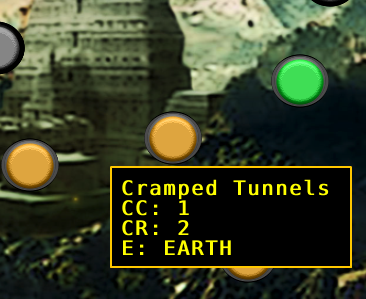 The name and element already have an impact on the game. The two points that were misses were CC (Challenge Cards) and CR (Combat Rating). With v0.10, we added in CR calculators. The first step in the CR calculation determines how difficult a monster is. This number is calculated based on its total stats divided by 10. Something like a goblin would have a rating of around 3. A Chaos Beast has a rating of around 12.

The second part of the calculation determines whether the challenge is too difficult for the current location. In the map node above, the CR is listed as 2. The green node, Abadoned Village, is the easiest location with a CR of 0. The point of CR is to prevent you, the player, from having too difficult of a fight sequence. If you had to fight 3 orcs, then 3 trolls, and followed up by a Chaos Beast, there is no chance of survival. Now with the CR calculators, that situation will not happen unless you enter into a harder location.

The calculation takes a look at each enemy and sums the total of their ratings. Then it compares it to:

If you entered into Abandoned Village and were supposed to get three creatures that each have a CR of 3, your total would be 9. The calculator now sees that the 9 is too much for the selected location and eliminates one of the monsters for you.

Happy Hunting and Thanks for Reading!