The Verdun expansion has arrived! This is a huge free update, featuring a new 64 player game mode, a new squad, a new map, new weapons, map voting and many other improvements and features. Let’s dive into the new content... 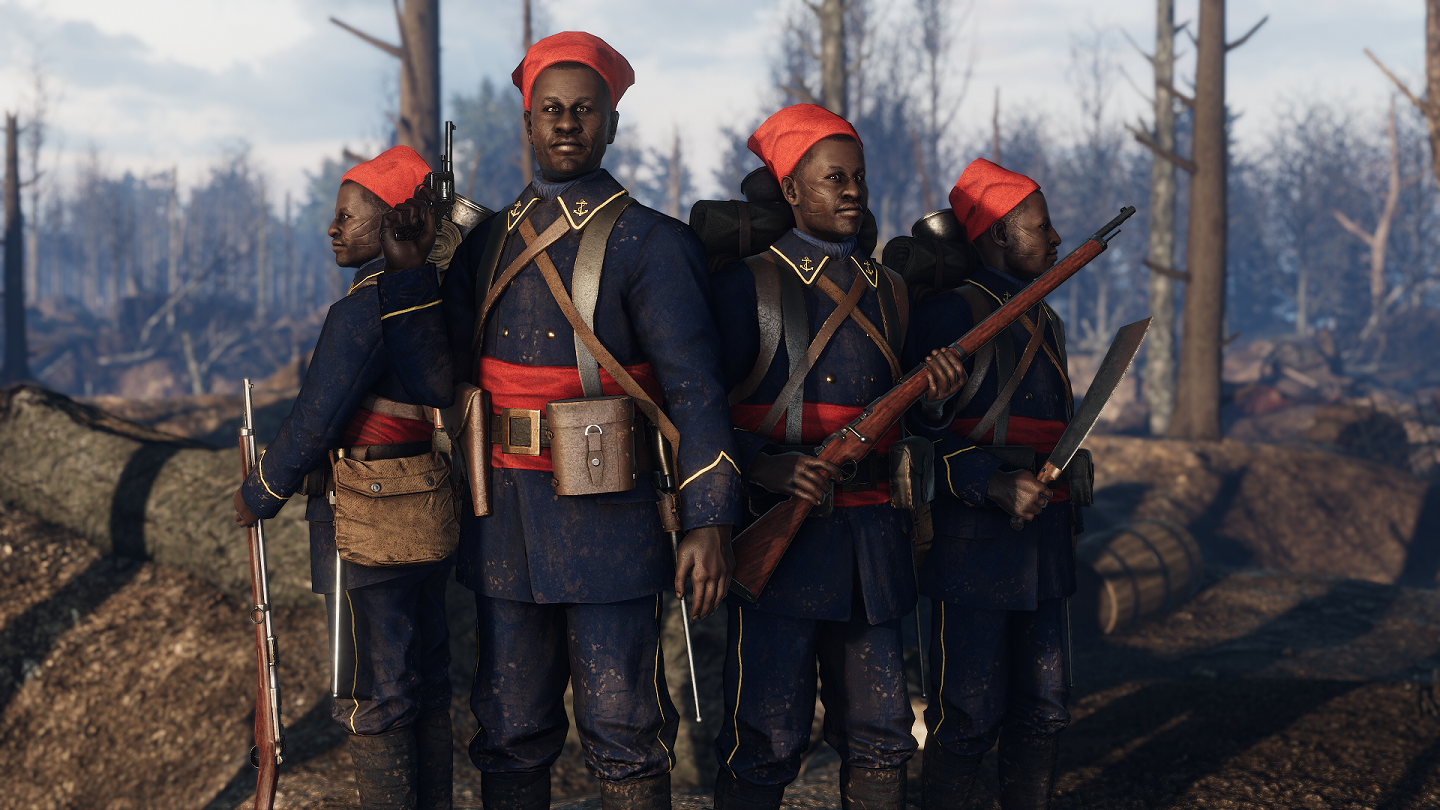 France is reinforced by Tirailleurs Sénégalese and four new weapons - these capable colonial troops bring dedication and a strong offensive spirit to the Western Front. The weapons included are machetes for close quarters assaults, Mle 1907 rifles, plus OF1 and petard grenades.

A tirailleur prepares a Petard Grenade. 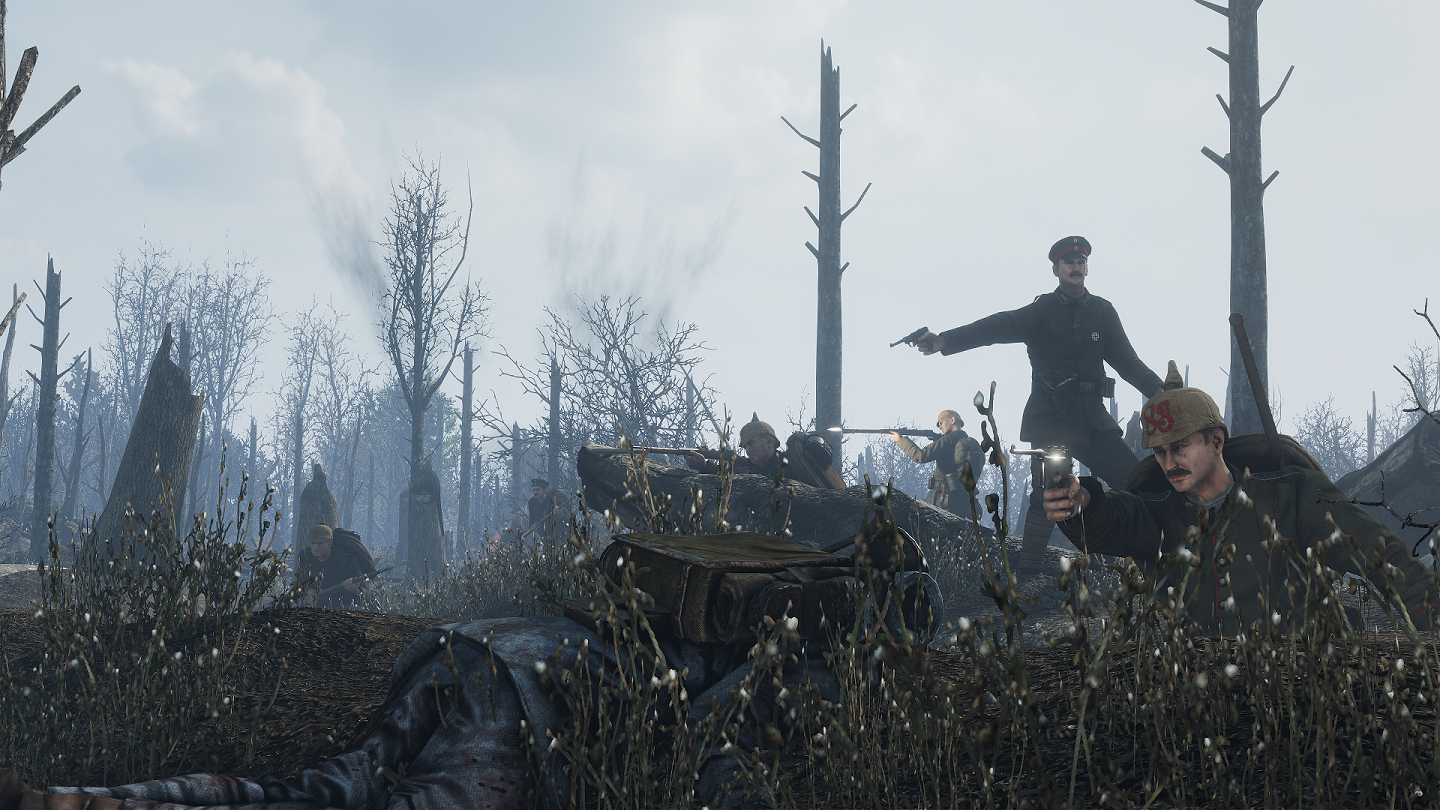 Located within close vicinity of the German border in 1914, this wooded area was targeted in September of 1914 by German attacks in an attempt to cut off the city of Verdun from supplies and support to the south. During this assault, commencing from the Woevre plains to the north, the Germans would advance as far as the city of St. Mihiel on the Meuse river and to the Bois-Le-Pretre ('Priesterwald' in German) on the banks of the Moselle river further east, thus establishing a large intrusion into French lines for years to come. Several attempts were made by French forces to reclaim the formed salient, these were extremely costly. Most notably were the mine battles at Les Eparges in 1915. Eventually St. Mihiel Salient would witness the first major American offensive of the war in September of 1918. It was the first and only offensive of the war made solely by American infantry. Almost 1500 aircraft supported the attack, with 40% of them flown by US pilots. The Americans caught German forces as they were retreating, and a fierce initial artillery barrage followed by aggressive advances led to a significant Allied victory. 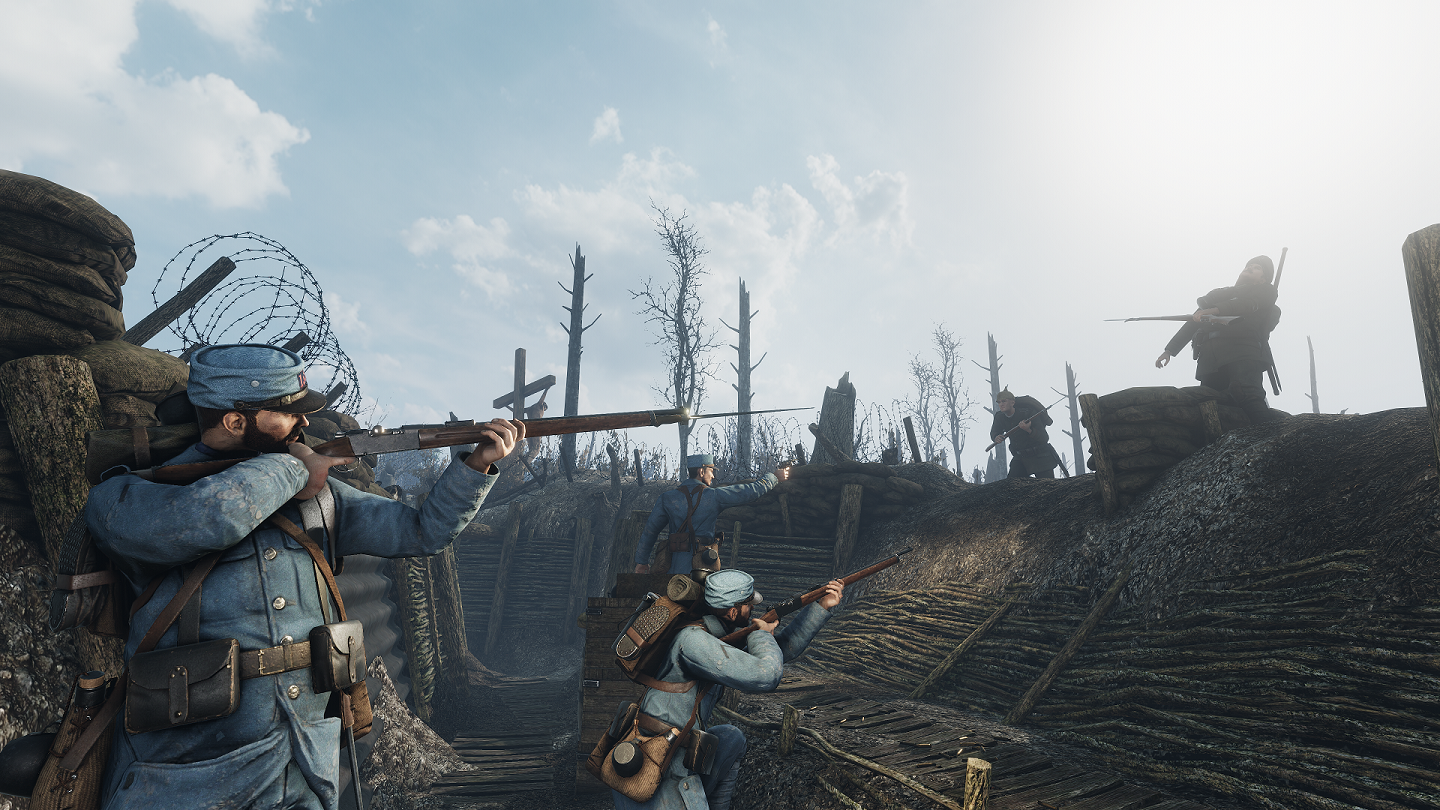 A battle on St. Mihiel map.

In Verdun, the St. Mihiel map is a battlefield covered with forest, trenches, sandbagged positions, and dirt mounds. Many trees have been destroyed by shellfire, but others still stand. In some areas, the stumps and trunks will be the best source of cover, while in other places there are well built trench lines. 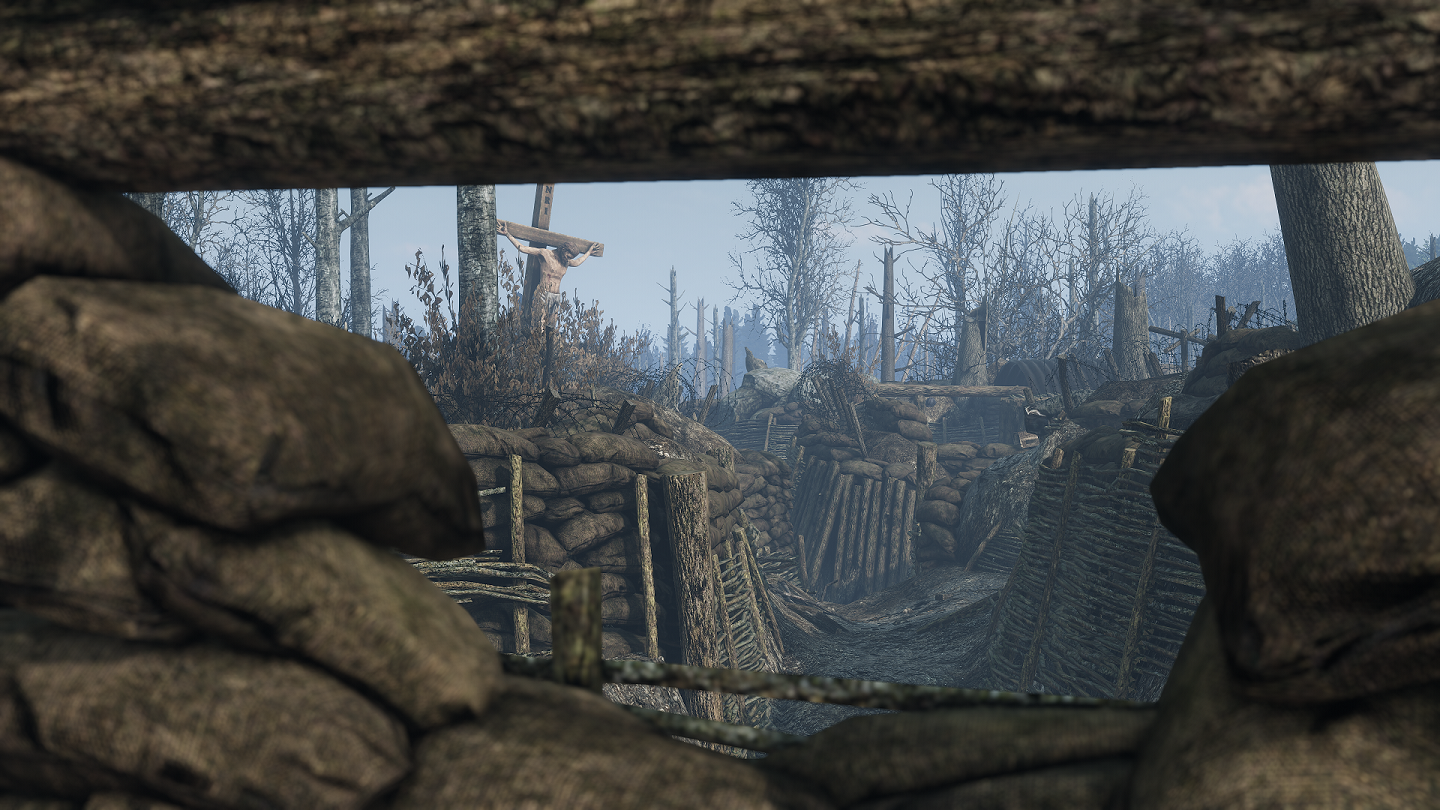 A defensive position in the forest trenches.

With St. Mihiel we wanted to capture a completely wooden area that is devastated, unlike our other maps which tend to involve large meadows or open elements. As a starting point we took the location of the bois-le-pretre and actual trench maps from that area to base the map on, it has a gentle slope to it as the setting is in the hills above the Moselle river - if you peek through the trees you might see the valley below.

In terms of gameplay we wanted to offer many organic points of exit from trenches through craters and gentle slopes such as is the case on Vosges and Argonne, combined with forward saps to concentrate the fights on, which is also a popular feature on the existing maps. As you get more into the rear of the map you will see the density of vegetation increase to help you orient yourself. Another prominent feature is the landmark of the Croix-des-Carmes (The “Carmelite” wooden cross) in the center of the map, which switched hands during the battles that raged in 1914 and 1915. 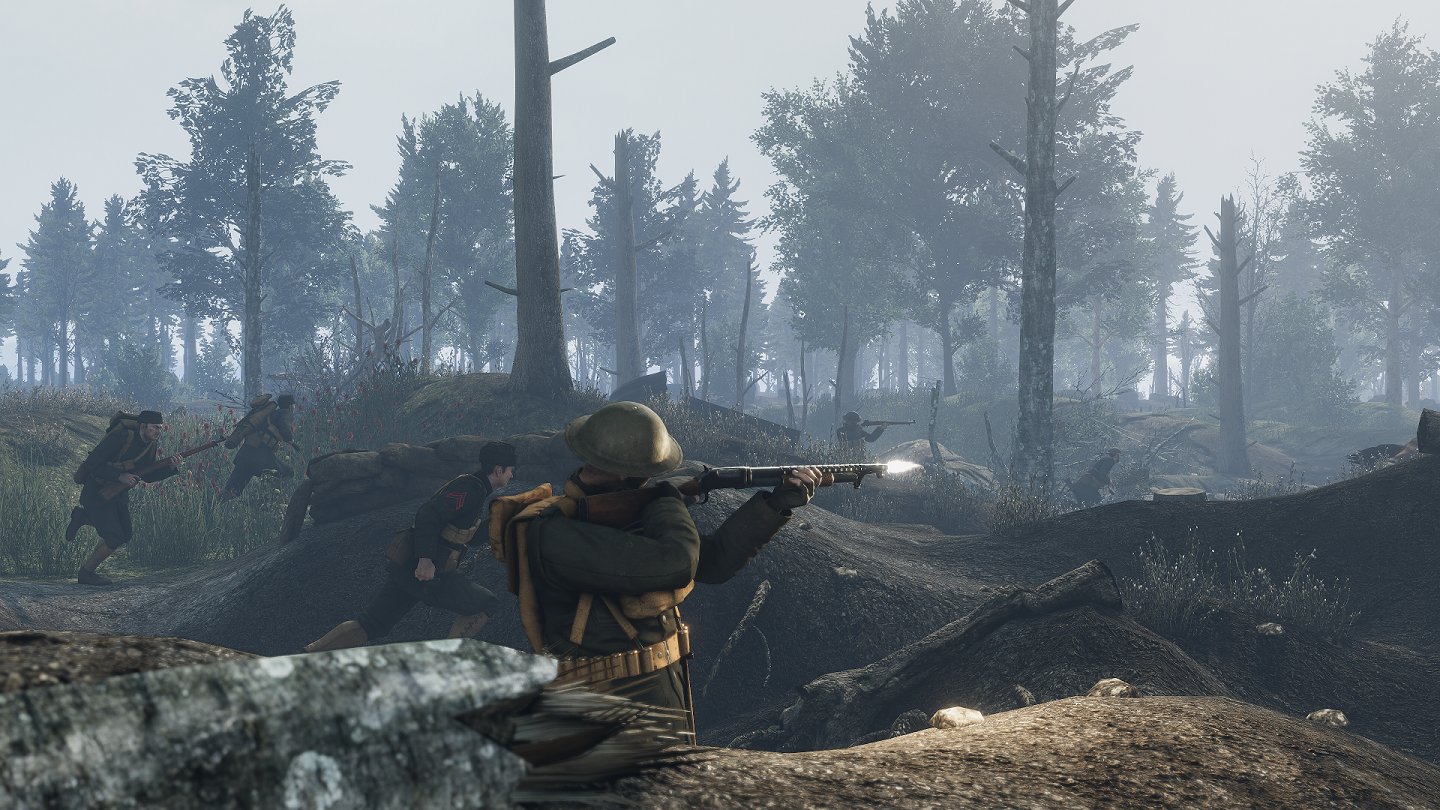 US troops in the attack. 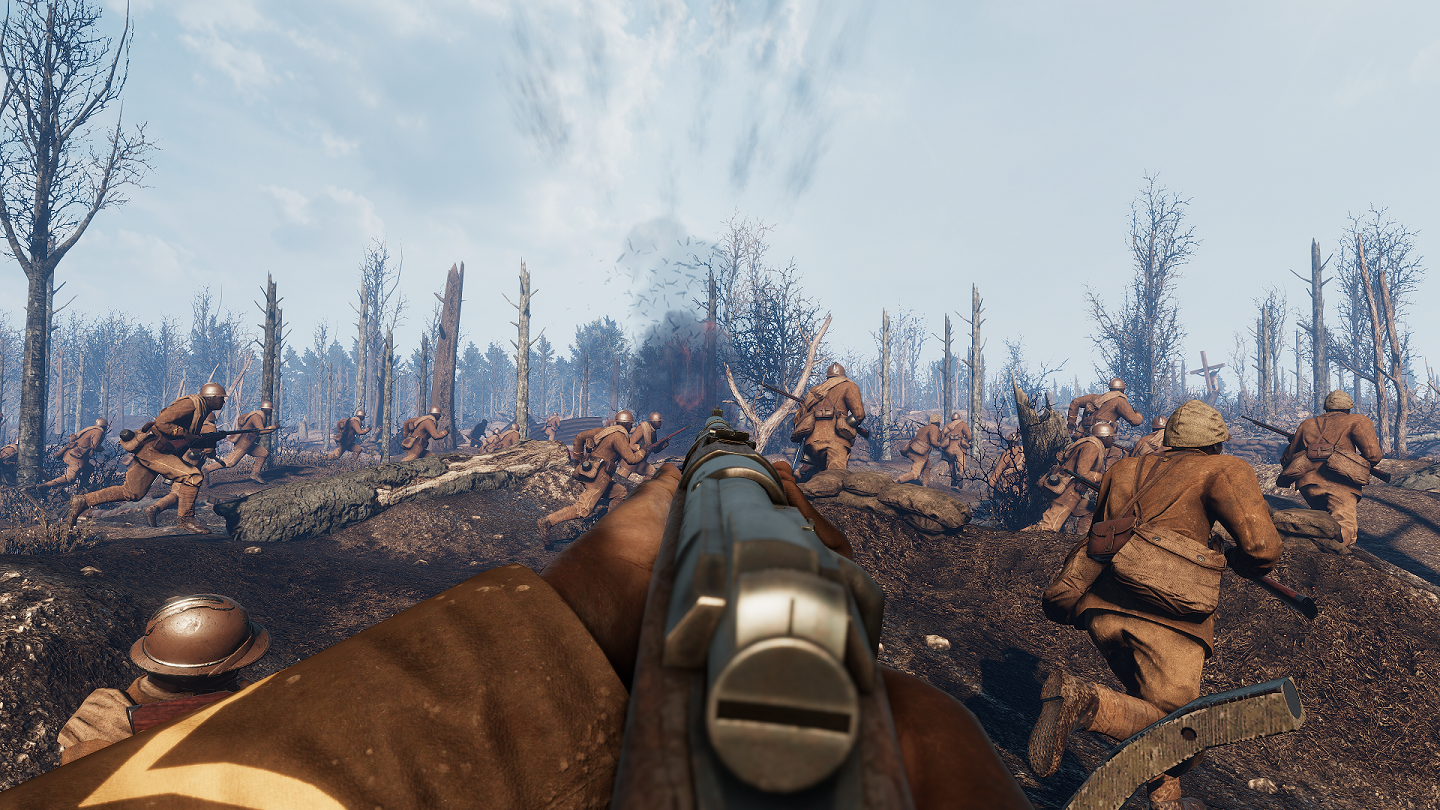 There will be 64 players battling it out for control of the trenches in the new Frontlines game mode. These epic battles include bot support to guarantee large scale action. As the servers fill, bots will leave until all 64 slots are player filled. Like in Tannenberg, we will continue optimizing the bots.

The core gameplay is the same as the Frontlines mode, but tactics will change with more soldiers on the battlefield. There are some adjustments to call-in cooldowns as more NCOs will be present, less grenades are available, a few map changes as well as other tweaks to fit the larger number of players. The core remains the same though - you still win by capturing enemy trenches and defending your own. 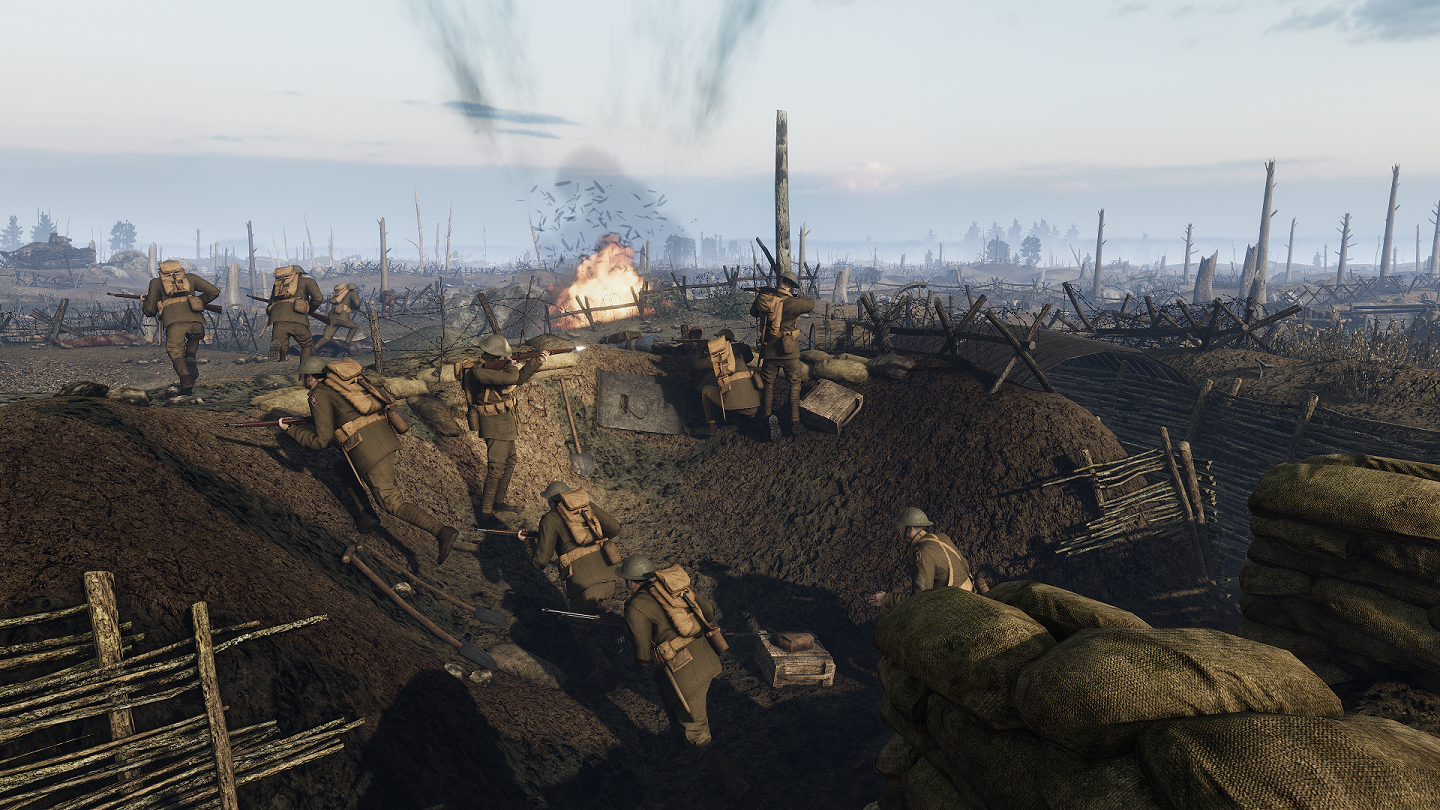 To accommodate the 64 player game mode we extended some of the narrow sectors in both Argonne and Artois. Here a screenshot of U.S Doughboys firing from an extra shell-hole created in the 2nd entente line. 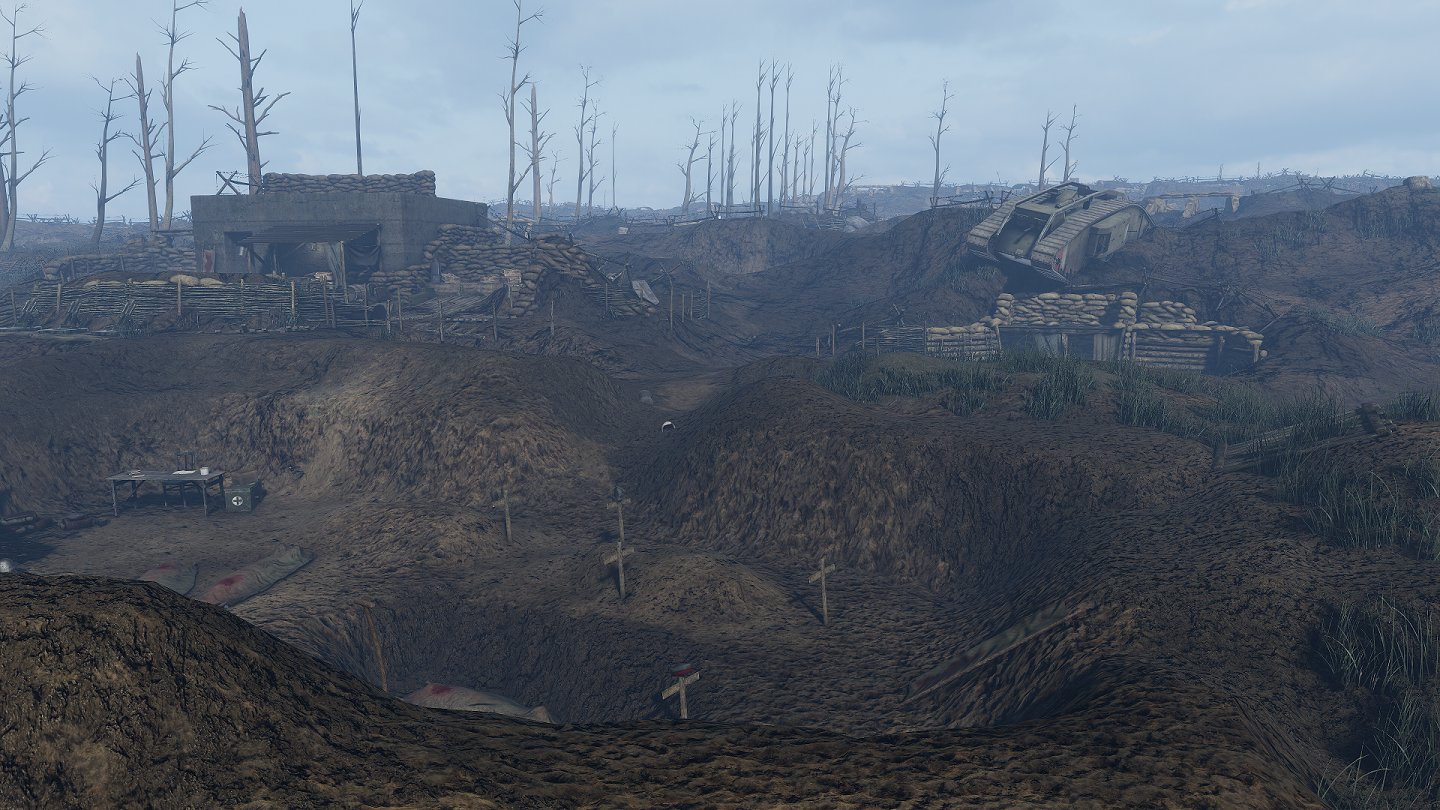 Some changes were made to the extreme lines in Artois.

The existing Frontlines mode will not change in it’s essence. No bots will be added to this mode. The only changes you can expect here are a new Spawn and Overview map (more on this later) and the name change: Frontlines (32 players). Bots in the Frontlines Private mode can be set to your preference with the command /setfillbots.

New UI
The new Tannenberg UI has been progressing nicely, and we have the first version of the new Verdun UI ready for testing! If you want to try the new UI, you can use the ‘opentesting’ beta. This is available via Steam: Steamcommunity.com

You can switch back to the regular stable version of the game at any time by going to the beta menu and selecting ‘NONE’.

The new UI currently on the opentesting branche.

Spawn and Overview map
We added a Spawn and Overview map to each game mode. You can now choose to deploy in a friendly or sector spawn point via the Spawn map. Another new feature is the ‘Overview map’ where you can regain your bearings by pressing ‘M’ - this will enlarge the mini-map. Battles will become more insightful, these maps will give especially new players a better understanding of the situation.

Enhanced awareness of the flow of battle: you can now see where your squad is and your spawn.

The spawn map also animates whenever a sector is captured
and changes the view angle based on your faction.

Map voting
By community request we now have a Map Voting system in place. After a match end you can now influence where to fight next. The results will be shown after everyone voted to make sure no majority influence occurs.

Example of a map vote.

What else?
There is much more in the expansion: barbed wire will no longer kill you - although it will still make you a sitting duck if you get caught up in it -, jumpshooting has been removed and you now get immediate feedback as well as a score penalty for friendly fire.

Read the full changelog on Steam to see all the changes.

Many thanks to you all!

We’d also like to take a moment to give our thanks to your support over the years. We hope that this expansion shows that Verdun hasn’t been forgotten even with the full release of Tannenberg coming up.

By request, there is a Supporter Edition on Steam now available for Verdun - like the Tannenberg one, it features the soundtrack, a pack of Verdun artwork, characters, and weapon renders, a Supporter Star, and bonus career points for new players to unlock more weapons and loadouts at the start.

Finally… ho ho ho, Christmas is on the way! As in the past, we expect there may be a ceasefire in parts of the front…

This is AWESOME!!!!!! I love this game. Too bad is that my computer is a little messed up when playing this game. Can only play like 15 minutes straight without the computer turning off for some stupid reason....continue the good work devs :D

i'm pretty sure i see someone being crucified 0_0

Can we get more Central Powers squads?
There are 5 Centrals and 10 Entente squad types at the moment