Development of Venturi is in full swing, and the team would love to show you the newest bits we've been working on. From alien races to autonomous robot drones, UI and demonstration videos. Let's get right to it!

Development of Venturi is in full swing, and the team would love to show you the newest bits we've been working on. From alien races to autonomous robot drones, UI and demonstration videos. Let's get right to it!

Mysterious and powerful, the Quetain have existed for eons in legends, folklore, and cautionary tales around the galaxy. Every story the same: a world becoming highly advanced and in the next moment, obliterated into almost nothing. Some will tell you it's an angry deity or invasion force, or the planet destroying itself from it's own advancement. All of these stories become twisted and distorted over the generations, with the original worlds these disasters happened on long lost or fallen into obscurity. 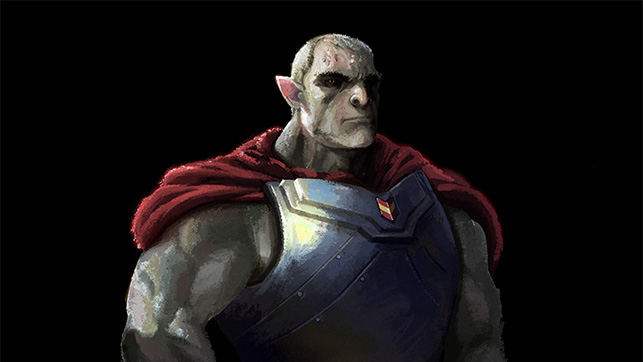 The truth is an entirely different matter - The Quetain very well do exist, but in what form or place is the true mystery. Upon hearing of Earth's discovery of the Venturi Portal technology, they quickly swarmed the system to seize it - but you where the last survivor to exit through the Venturi portal alive. What happened to Earth or Humanity is a mystery now, and will fall into the realm of folklore unless you can find some way to reverse it.

But how exactly do you stop something considered a deity?

As a player, you'll discover that one of the key concepts in the game is your ability to befriend and create alliances with the many different alien races. Of course, because player choice will always remain an important aspect of Venturi you don't *need *to keep anyone as your ally— but we leave that up to your imagination. Regardless, the Mycyr started as one of the many initial planned races, but as development progressed, they turned into what is now referred to as the “Companion Race”. You meet the Mycyr early on in your space travel adventures, and they stick with you for the majority of the game. Though you'll only gather vague hints of what the Mycyr are about through your companions, you can discover much more about the race as a whole by completing various connected missions and quests.

The Mycyr have a very distinct appearance, which plays its part in the unusual characteristics of the race— both visually and culturally. Unlike us humans, the Mycyr have little government structure, and instead heavily rely on their ancient Law of Systems in order to influence the direction of their development. Paired with the fact that the Mycyr are so reserved, it's hard to determine their intentions— even when they are being completely forward. 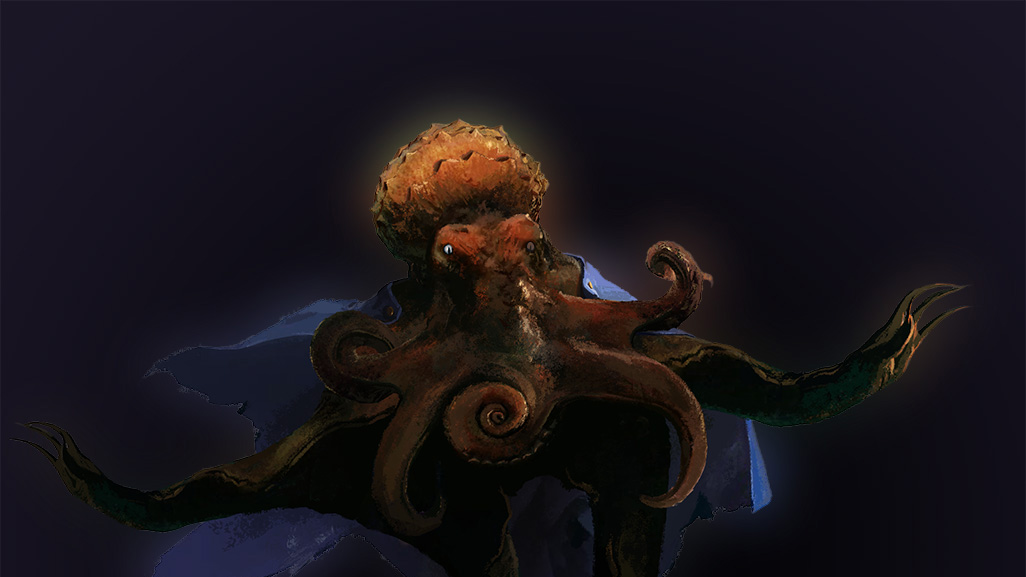 The Mycyr live on one of the moons of the gas giant, the Carplet. The Carplet emits unusual, unpredictable gases that are believed to have brought the Mycyran race into existence. It's also the likeliest source of their innate telepathic abilities and intelligence— but no one knows for sure. And not all mysteries are meant to be solved. Even through the strength of your alliance and bonds with your Mycyran allies, your closest friends are willing to risk their lives to protect the secrets of the Venturi Device... from you, its wielder.

The Junkyard is a massive ship graveyard orbiting the Mycyr's parent planet The Carlet, and is currently controlled by a band of looters and smugglers. The bane of the Mycyr for years, the smugglers that have taken over the Junkyard are a presence as mysterious as they are powerful. Their drones swim the debris of the ring system and pick apart their surroundings with cutting lasers, attacking and stripping any ship that moves too far into their territory; as a result, the Mycyr are not sure who the smugglers actually are - a corporation, a band of pirates, an artificial intelligence controlling the drones, or something else. 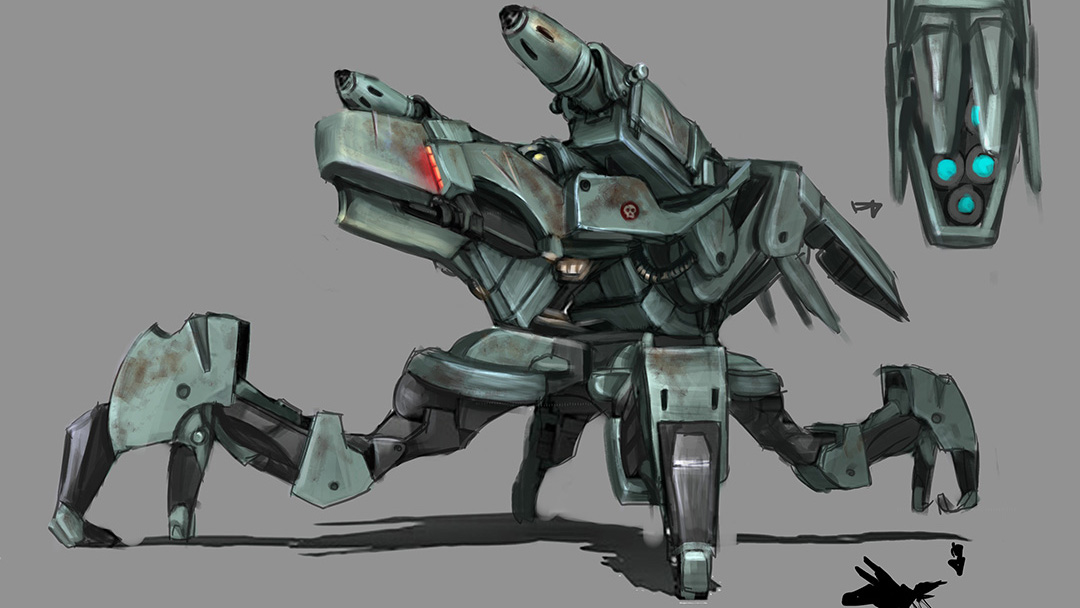 After securing the Junkyard for themselves some years ago and protecting its borders with an ancient drone system they managed to revitalize, the pirates began fighting among themselves, ending in the explosive destruction of their main base. The drones continued harvesting and selling equipment as they were programmed to do, but their money has been piling up for years with no one to claim it.

Pawel, our wonderful web developer and UI master, is overhauling Venturi's UI. I'll let the images speak for themselves! 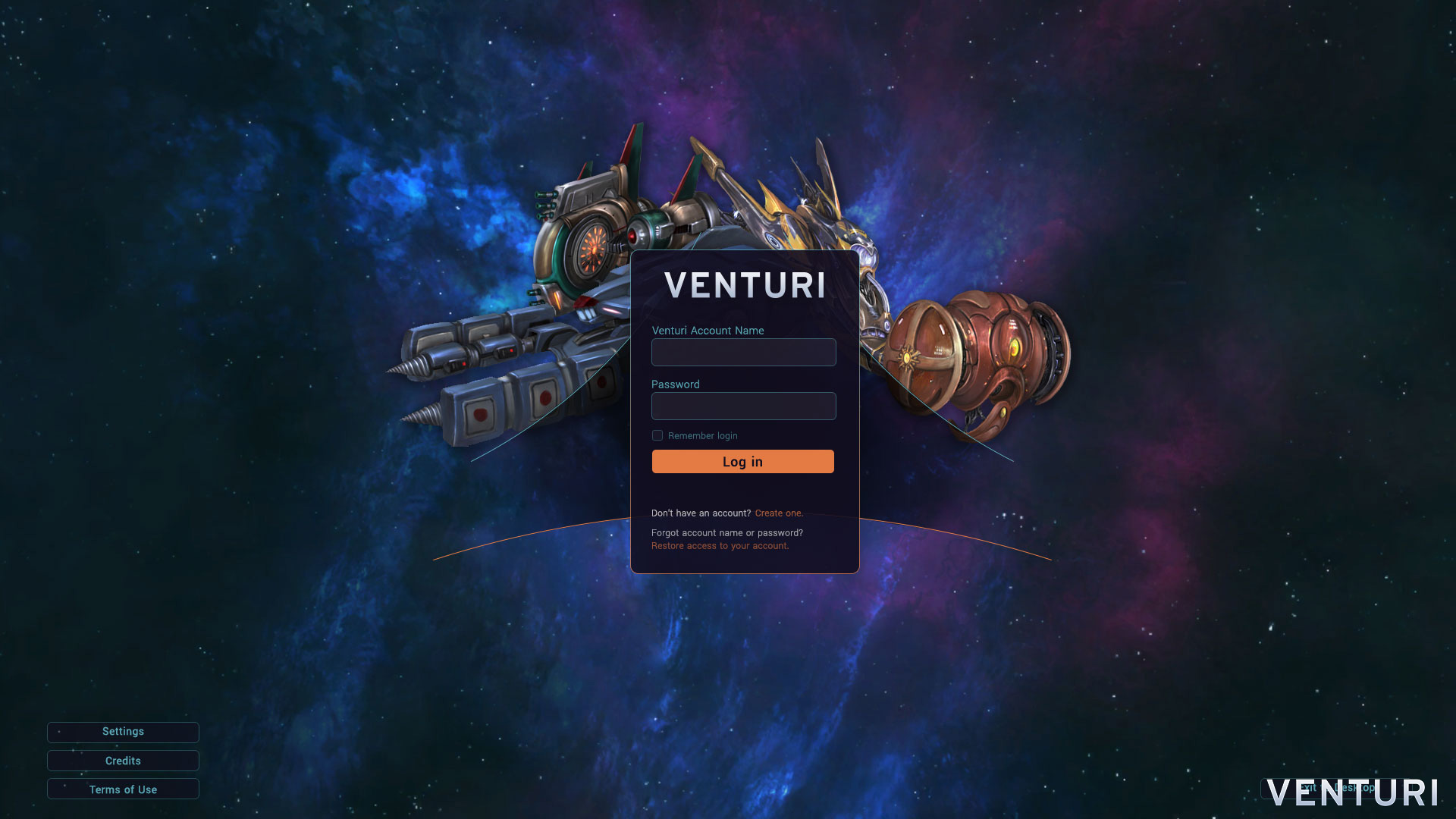 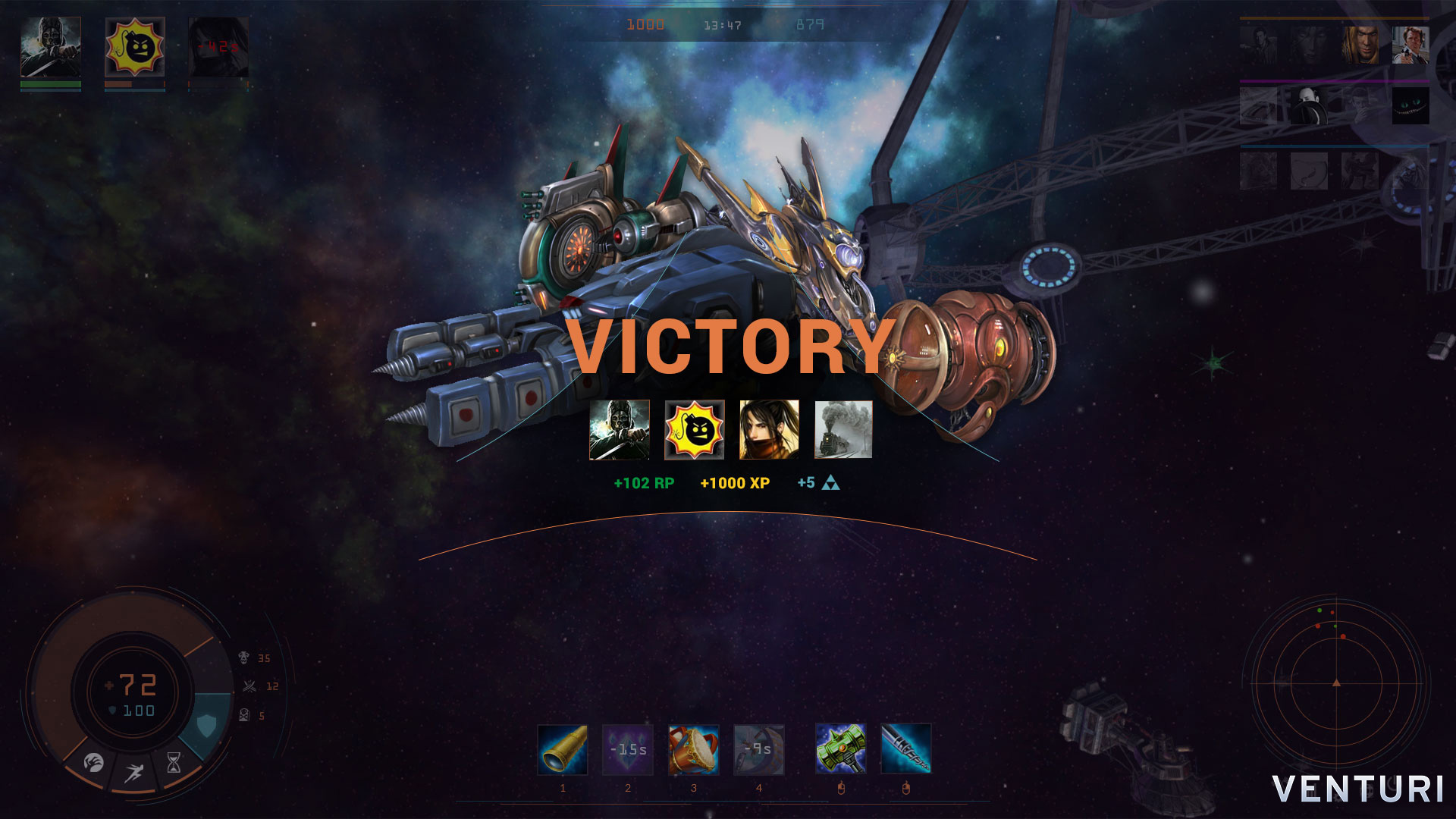 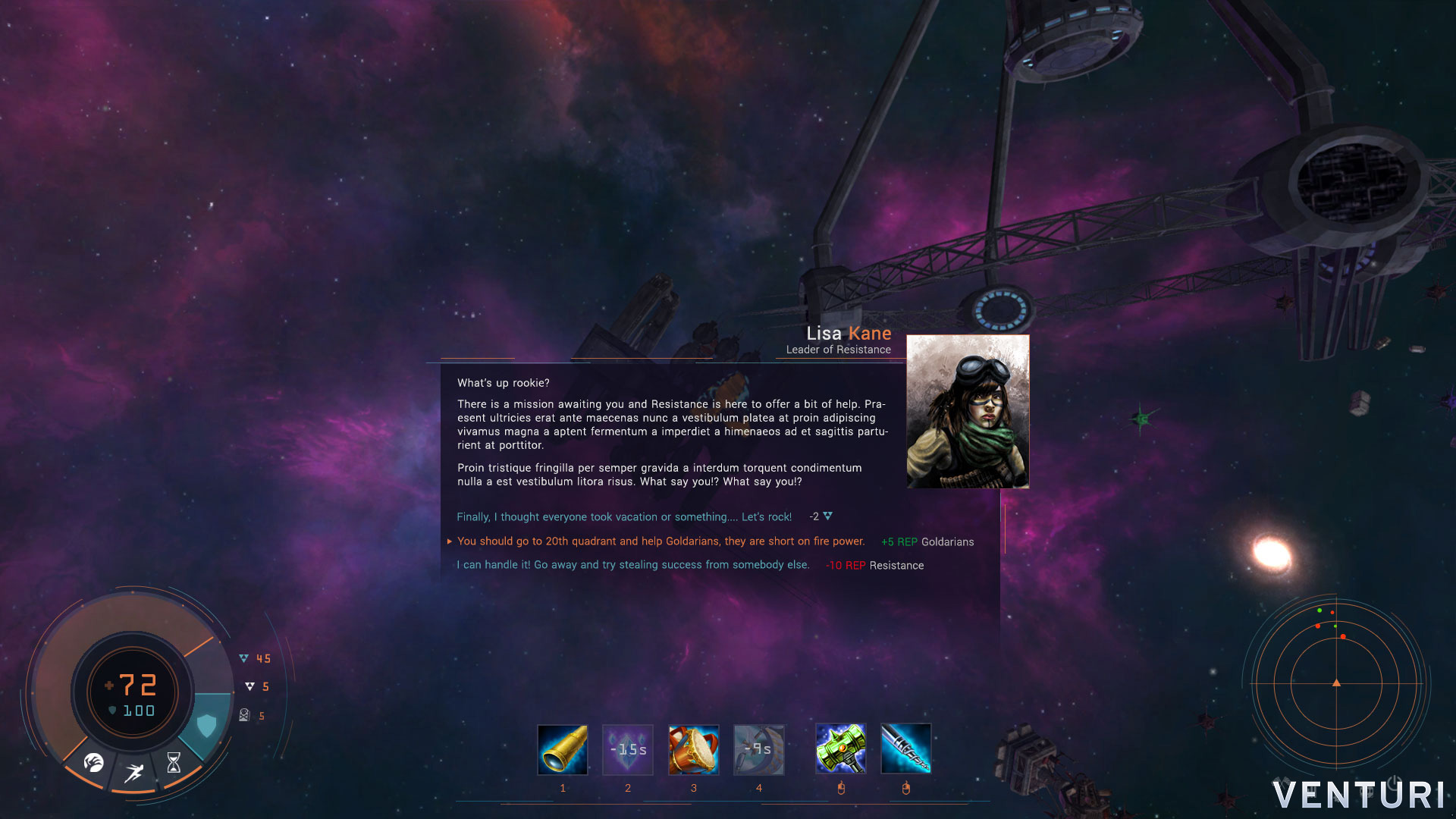 Finally, I've implemented some awesome new weapons and abilities! The Shield Blast will blow away anything nearby with a shockwave of EMP energy, at the expense of your own shield. The Time Dilator slows time around you, or more precise firing and more badassery. The Gravity Mine is a tricky little moster, sucking in any objects caught in its gravitational field, including you! Finally, the EMP Mine deals EMP damage to anything within its radius, causing EMP damage and distorting the UI.

We hope you enjoyed everything in this news post! Please follow us at @VenturiGame and Like us on Facebook! And of course, leave us some feedback below. We'd love to hear what you think of the game -- good and bad!