We release five new never-before-seen terrain screenshots of Valley of Trials in Wc3:WoW. The zone is still being worked on and is about 38% to 60% complete.

Now, after reterraining the entire zone and replacing one of the tiles, it looks like this: 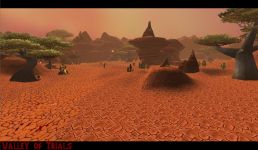 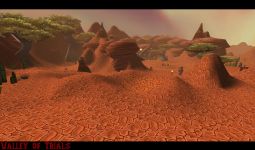 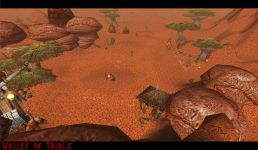 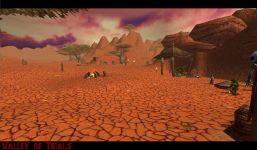 As you can see, the terrain has come a long way and hopefully you're beginning to realize why recreating most of the areas is actually a good idea and worth the wait. Valley of Trials, along with several other areas and much more to come, will be accurately recreated. Though, due to map size restrictions, I need to leave some things out that I feel is unimportant or simply cannot fit into the area. It's rare for such a situation to occur since I tend to make some areas tighter than others as an attempt to squeeze as much possible in one map, but it doesn't always work as well as I had planned.

How do I recreate the terrains accurately? I've recently signed World of Warcraft up again and have been using Fraps (a recording program) to record areas that I'll be terraining. I try to stick with one or two areas at a time since I end up having about 140 gigabytes worth of videos to work from, since the videos aren't optimized. After I record the areas in the game, I exit World of Warcraft and start up the World Editor. I load whatever map I'm working on and then watch the video (and pause it whenever needed to study certain details such as object placement and the steepness of a hill) as I work on the map. I'm very careful with the placement of objects, units, tiles, and even hills when working on making an accurate recreation of an area. I apply the same procedures to all zones I work on, including Orgrimmar and Thunder Bluff.

I hope you enjoy these previews! Feedback is appreciated.

looking forward for this!

Tile a tad repetitive, but better than previously.

Dont like how its all 1 tile per texture file, blizzard had at least 4-5 to give it more randome look/