Today we are showing of the MP28,II, an update by Hugo Schmeisser of his original MP18,I design.

Today for the first time in a while we have a render of something that isn't French. It is of course the venerable MP28,II submachinegun. 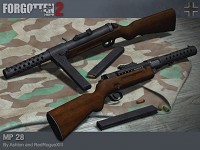 In 1915, the German Army recognised the need for a new weapon that would help with the newly emerged trench warfare. Automatic fire and portability at the cost of range were the main goals. Attempts to make fully automatic versions of handguns like the Luger failed, and a completely new design was started upon. Several companies worked on designs, but the winners were Bergmann Waffenfabrik with what became the MP18,I. Hugo Schmeisser had originally designed it to use a 20 round box magazine, but this was changed to the more readily available Luger Trommel magazine.

Despite only about 3000 MP18,Is making it to the front before the Armistice, they were extremely successful and established the submachinegun as a new class of weapon. In the years following Schmeisser would continue to work on the design. The MP28,II differed from the original design in three main ways: a new more reliable box magazine, a larger diameter recoil spring and finally the addition of a fire selector switch. Though the German Army never formally adopted this new design it would be widely used in the Second World War, especially in the first years when there were not enough MP38s to go around.

The MP28,II would be adopted or copied by a number of other nations, principally Spain, Portugal, Belgium and the UK. Almost all other submachineguns in use during the Second World War could trace their roots back to Schmeisser's designs. Our MP28,II was made by Ashton and RedRogueXIII.