A dev summary of using real world terrain information to make a realistic environment for #Sohvr.

The Soldiers of Heaven project (#SOHVR) is a simulation of a real historic event that depicts the missions against a messianic cult that plotted to take down key religious leaders during the 2007 Ashura festival in Najaf, Iraq. The team wanted to take the re-enactment/environment as realistic as possible.

The team started by gathering data about the location where the event took place. The event was focused at a middle­ eastern farm in Iraq, on the outskirts of the city of ­Najaf. We collected reference footage of Iraqi farms and google earth imagery of the exact location, and then outlined the important objects within the area.

After that part had been completed, we started to think of ways we can replicate the terrain as close to real as possible. One of the ideas we came up with was to create a height map of the location using SRTM (Shuttle Radar Topography Mission) data, which would allow us to map the height map onto a terrain plane within the Unreal Engine.

During this process, we realized that the real location was mostly flat, and the extracted heightmap didn’t have enough resolution (it covered an area which was way too big from what we needed). At this point we decided to manually shape the terrain based on reference photographs and the google Earth imagery.

Once we had a workable terrain we then used textures from news photos from the actual event and we also used Unreal Engine 4’s terrain and foliage tools. 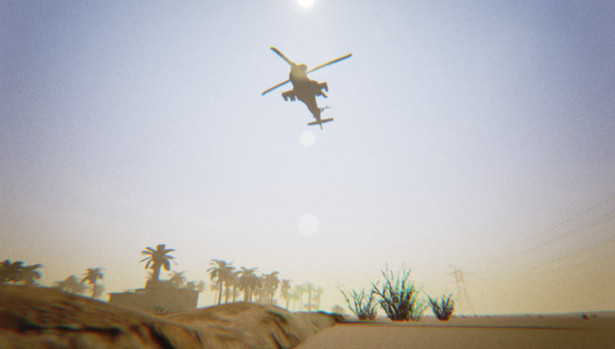 We think that grounding this immersive journalism game in a real world location helps to add authenticity to the project.