More news from the Fronts. Featuring new units for the USA and Future Factions

Opening News Files.
Current Battlefield News and Bulletins:
Good Afternoon General. We have word from USA Forces that we are going for a new approach into our Sentry Drone Technology, Our executives in Japan has offered our army 2 new Drones which can boost our military might in our battle against the GLA. 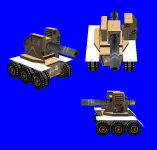 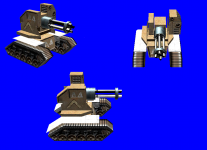 These drones will be our new financial alternates to the Sentry Drones and Annialator Sentry Droids, they also have compact weaponary which makes them a threat against the enemy while building our main force against the enemy, all drones will be built at our Command Centers, this will require the go ahead from USA Armour Facilities before we can build our drones for war.

Also be advised, the Drones are not final, the appearences will change.

Other News:
We know the Japanese are getting angry because of the GLA, they are deciding go ally with the Freedom Corps if they rise again. All Japanese weapons we are using will be sent back to the Japanese so they can use it against the enemy.

We also Predict that South and North Korea will be reunited after what made them split appart after World War II, while then, North and South Korea is trying to ensure non of its forces are getting corrupt to work with the GLA, if things go well, this will make things better.

Another Army from Southern America like Japan may get involved against the Chinese in the Future, all freedom factions are to be on alert if the GLA are planning a comback against us with this new Southern American Ally if the GLA gets destroyed in the war.

Stay Tuned for Further Updates from the field Commander.