"Frosty", Urizen is kicking more arse everyday, putting on some mass for the Deluxe version, it's going to be a knockout come June!

Hey everyone, we've got a small update for you, but where to start? 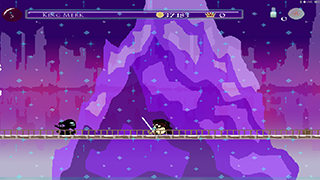 We'll I've realized that Urizen could do with more in-game hints, so I will be implementing farmers, citizens of Urizen and peasants to interact with the player and give out game-play hints and secrets. You'll be talking to a funny looking crow named Bones soon, yeah he'll probably try to sell you something. LOL Again the create a stage is on its way but a doubt I'll have it done by June though, I might dismiss it altogether. Yes I could do so much with the world of Urizen but I'm only one guy with a hobby, and a quality control/writer friend named Derek Killion, and Efe Tozan my proud hired musician. I'm going to keep rolling with project Urizen as long as it takes, I'm in it 'till the end.

From the Bloodshadow Games Team