New features and content added to Urban Wars as of June 15th 2010.

Posted by ArchDukeInstinct on Jun 16th, 2010

Here's a list of our current arsenal of weapons that have been coded into the game. Some don't have textures yet. 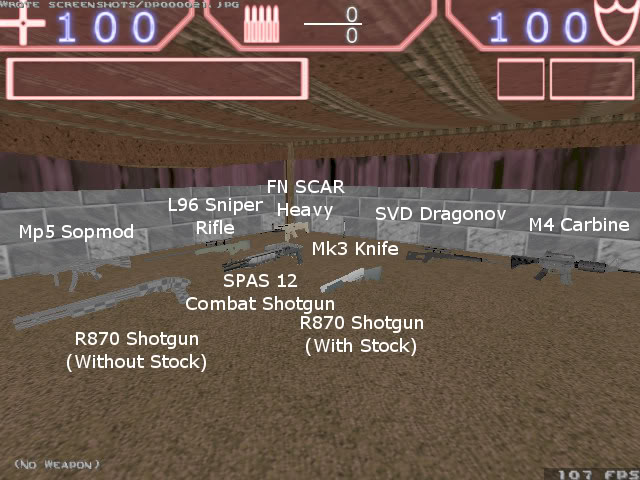 We've added several different weapons that weren't seen in our first game play video we posted a week two ago. These include the SPAS 12, both versions of the R870, and the Mp5. A lot more guns are still planned to be added into the game.

On the topic of weapons, I'd also like to announce they now recoil when fired and players will have to compensate for it by looking downward to keep on target.

There's also been some changes to the code of all weapons to make it more efficient. I've also made a palm tree model and here's how it looks in game: 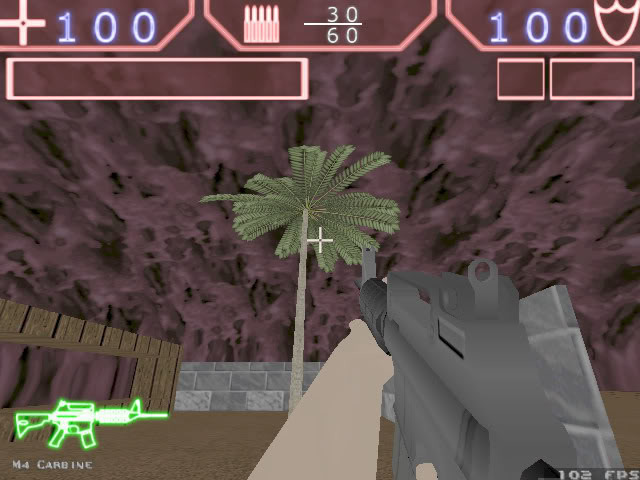 lol this game looks erm... how do i put it without offending you :| XD

This is our testing level that is using Quake 1 textures. All the textures on the guns are temporary also. The resulting game is not going to look like the previews shown on this article.

You should look at our "Images" section that has all of our gun models to get a real idea of this game's graphics.

the question is, if you need a graphic card at all to run it :D

the graphics arnt that bad. just needs some texture work. also i would suggest making your HUD smaller.

The problem is that our texture artist is never around.

Urban wars?, it looks to me as if he is in a cave were a palm tree seems to be growing

This is our testing level. Not an actual level that will be in the resulting game.

The lighting and textures need work but i'm sure you guys will get to that.
The models look great though :)

ok, before anybody comments again, THIS IS A TEST LEVEL. AND THESE ARE NOT THE FINAL TEXTURES.

I guess I should have mentioned in the article that it was merely our test level. I thought that the big stack of guns just laying around was a dead giveaway though.

I am sorry to say, But Like ALl of these comments almost are totally dissing the game. Positive criticism would be nice people.

"the question is, if you need a graphic card at all to run it :D "
It doesn't help when They Don't have nearly anyone dedicated to the mod except nixtwiz, Sarge, And Duke. The rest Don't contribute Crap to the Mod. Their leader, leaves whenever he likes and expects the mod to get done (And it does). My point being, Don;t be ******* on these guys. They are having to adjust to doing other stuff since Some of the people they need aren't that Common. Quality is taken from 1 area when they have to tend another. Just... Leave some nice criticism, or negative, but at least they Can use negative criticism.

And Sorry That I haven't made or started a map yet, I guess I have more coming for me Than I figured. Prime consumes my whole time.

It's their failure for not recognizing the images are obviously from a test level from an unfinished game.

You don't need to make excuses for us as to why our test level is not that great. We didn't try to make it look good.

Mexicouger don't diss people if they don't have good graphics. He posted this after you posted what you did,

"This is our testing level that is using Quake 1 textures. All the textures on the guns are temporary also. The resulting game is not going to look like the previews shown on this article.

You should look at our "Images" section that has all of our gun models to get a real idea of this game's graphics."

They have some pretty cool models.

if this is a realism game you'll have a following.

Wrong game, sir. You must be looking for Left 4 Quake. It's the one with zombies.

Gayest idea I have ever heard....
And Robot Nazis sounds retarded too.
Can't you just put Normal Nazi's that are in the future or what?

That's because it's not Robot Nazis. It's Mechanized Nazis and yes there is a difference.

everything is looking nice except for the HUD

it needs to be smaller

the game looks like it could be promising , i think you guys just need to work harder on some of your gfx. some of your models seem over sized in first person. that palm tree does look pretty nice though. you might want to work on adding in a engine feature which lets you use textures outside of the quake standard pallete or even make your own.