Urban Strife is about combat and survival so all things considered, we decided to turn health into a system, instead of a character stat. LIFE, or overall health, has a very special meter. Life meter is, of course, critical because once it reaches zero, you are dead. This being said, body parts have their own internal HP too and damage received by them is weighted differently when applied to a NPC's life. For example, a head shot will do about 3x damage to global health, but a wounded hand will have a much smaller effect. This makes body armor (that protects the head and the torso) way more important and leaving the limbs exposed avoids the Juggernaut effect (which is not desirable in a survival, low-tech game). Killing an armored enemy simply by attacking the limbs is a difficult feat, but bleeding and crippling will severely impact his/her combat ability so at least you have a fighting chance.

Any attack type can generate a bleed tick so for each wound you will lose a small amount of HP, over time. Of course, a blade will cause worse bleeding than a blunt weapon. If someone in your group is bleeding, that character will try to remind you, from time to time, to patch him/her up. You should do so because, while not overly aggressive (unless you are full of holes), bleeding drains from global health directly, no matter where the wound is located. This can cause massive life loss if left unattended. First because these "bleeding ticks" are cumulative so more holes means more gushing blood. Second because it will take a while for the bleeding to stop on its own and the wound to close. If you bandage early, you'll avoid losing a lot of HP and keep fighting. Of course, trauma itself will remove a portion of your life, too. So trying to bounce bullets off your chest is still a bad idea. 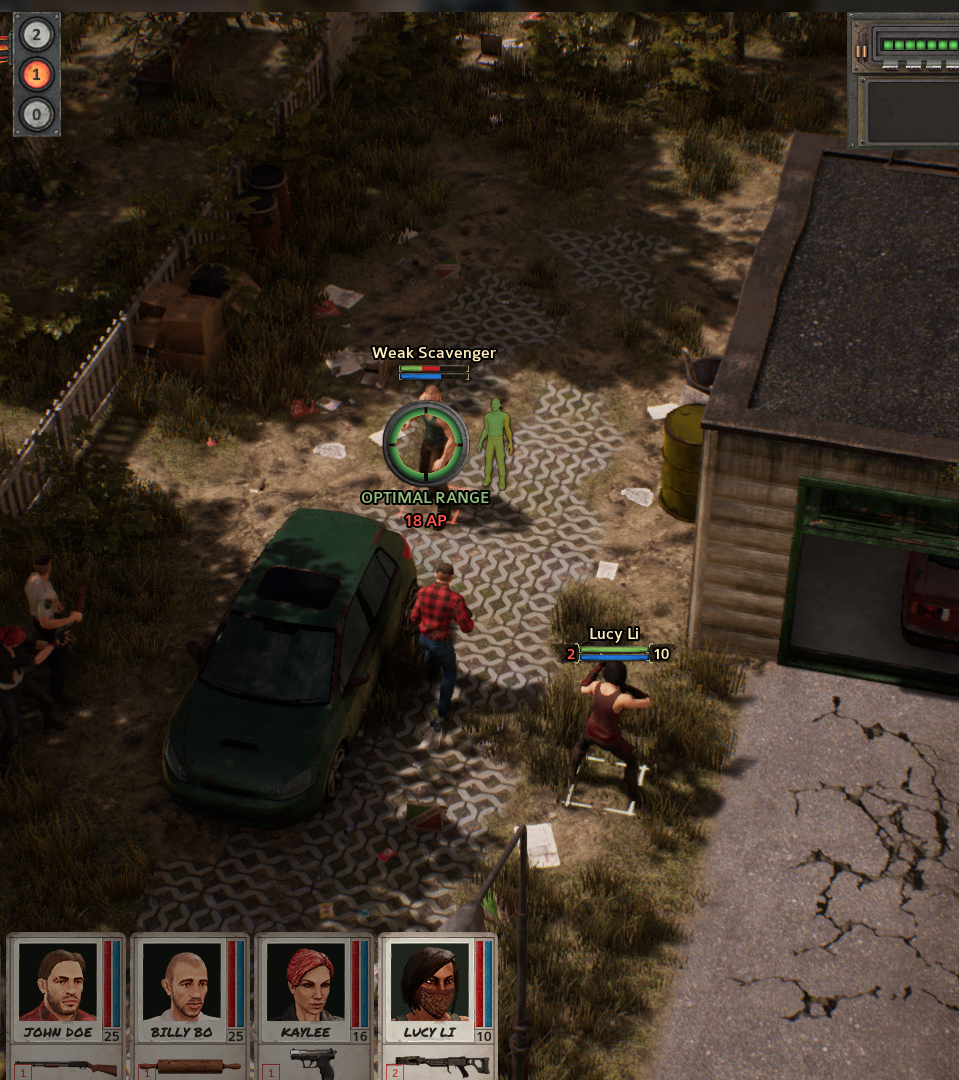 Bandages are the most basic and readily available hemorrhage fixes. One bandage stops all bleeding on a body part and is consumed thereafter. Bandages stack in inventory.
Med kits are advanced tools and they will consume a portion of their condition when used to stop a wound from bleeding. Partially consumed kits can be merged one into another to save inventory space. 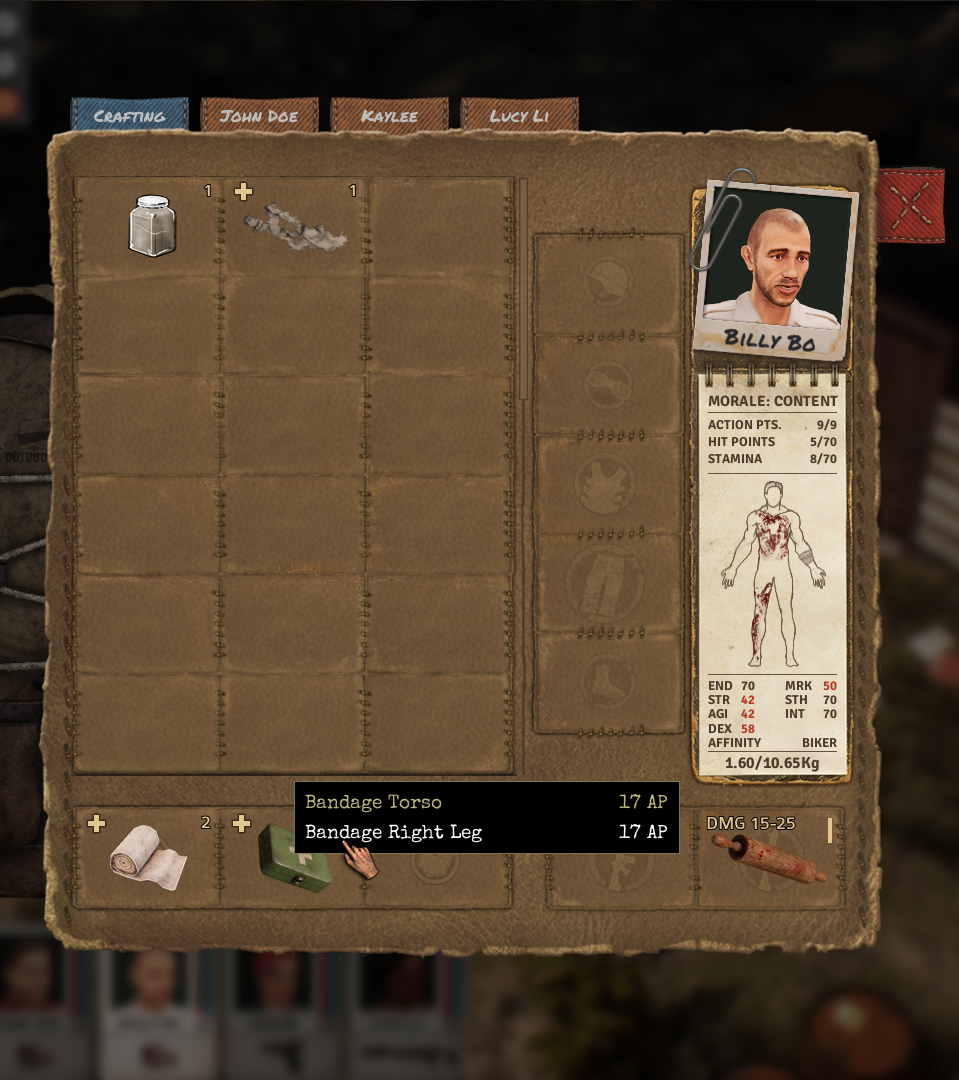 Fire deals damage over time to exposed body parts. Walking through fire will result, for example, in burns to the feet. But once you catch fire, immolation will spread to adjacent body parts and can result in a very unpleasant death. Even if you walk away from the fire, immolation will persist and keep your character in a “disabled” state for a short period of time, unable to do much beyond desperately trying to extinguish the flames.

When their HP meter drops below a certain point, all body parts generate “crippling” penalties. Crippled hands will lower your dexterity, gravely wounded legs will drop your agility, etc.
Body armor will come with different protection for each type of damage. Possible types of damage are:

Stamina is a particularly important trait because it affects maximum Action Points. You cannot directly “heal” your stamina, but you can deal with what is draining it, aka Pain and Exhaustion. As expected, if you neglect it, you will pass out when it reaches zero (the faint state is WIP).

Pain is generated by any damage taken, same as life loss & bleeding. Different types of weapons generate different amounts of pain, with blunt weapons being the most effective. Pain goes away with time but can also be removed/numbed using various substances (meds, booze, etc.). When in pain, a character will suffer a penalty to stamina and other attributes.

Melee will consume stamina for both defense (dodging) and attack (wielding). Both activities will increase exhaustion. Heavy weapons will tire weak characters faster so unless you’re a big Russian bear called Dmitry, leave that sledgehammer alone. You will recover from exhaustion in time unless you’re sprinting around or still in melee combat. It can also be compensated by drinking water, fizzy drinks, and other refreshments. When exhausted, a character will suffer a penalty to stamina and other attributes.

We mentioned medical kits and bandages behave differently in inventory. This goes for every other common item too. Basic items will come in stacks that can be divided as you wish and moved in piles. A good example would be a stack of bullets. Containers, like medical kits, bottles, gas canisters, etc. have a meter showing their “fill” condition and while not stackable, they can be merged into an item of the same type to save space. The above rules do not apply to weapons so no "merging" two bad guns to make a good one for you (we have other solutions to that, way more entertaining). 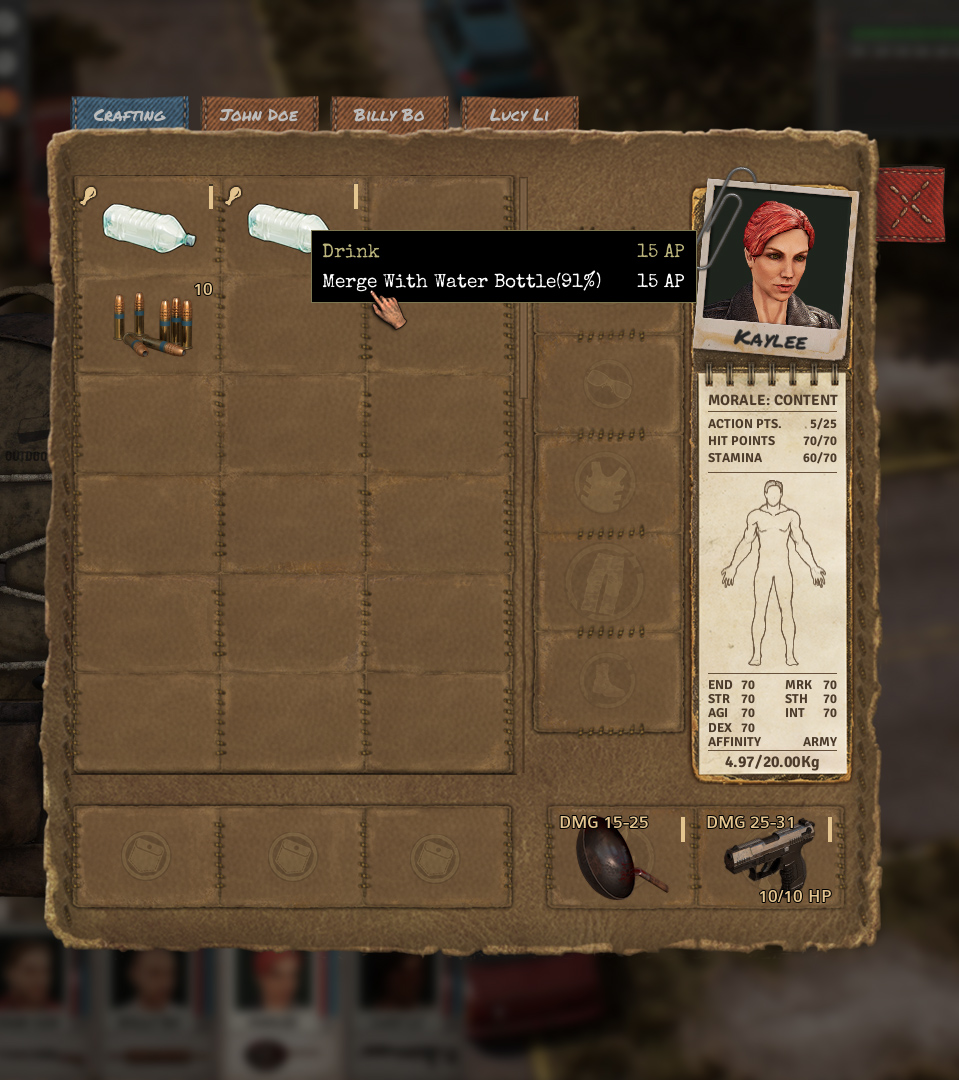 The art team is working on new enemies since the basic civilian refugees don’t look able to put up much of a fight. So, they came up with some “muscle” types that are going to give you more of a challenge and look badass while doing so.