This has been a very active week on developement of the game; I managed to finish once and for all the most important aspects from the Arcade mode, into a highly playable thing with unlimited waves (altrough, you wont make it beyond 25th or 30th at most, its just too hard!) 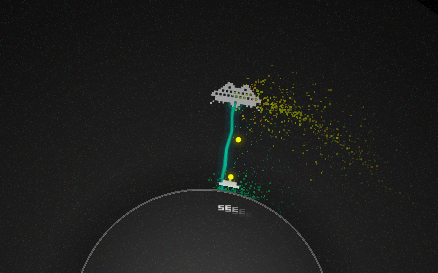 The 25th boss is probably the one I am the most proud of, it saddens me that only hardcore players will be able to fight against it because he is such a big badass! I might end up adding him on the story mode earlier than expected becase of that. That death-ray is a key part of the story *hint* ;)

The arcade mode is now 90% completed, I only have to add a few things wich I've to add on the sotry mode first, maybe a new weapon or a new boss, minor changes. The sory mode is barely started, I had written about 80% of the soryboard but not even started with the actual programming of it! It scares me to do so.. dont know why.

I have also been tweaking current effects wich where placeholders into more proper ones, like the bonus bomb weapon, wich was totally rewritten, the fire rate bonus, and the screen shake effects wich are not visible on the screenshots, but it give a sense of tremor wich is quite awesome; I might have to record a trailer earlier than expected to showcase theese in motion!