A brief post about player health, how it works, and the health menus.

Hello there! For this post I thought I'd share a little bit about how "player health" currently works in Hevn. A significant element of Hevn is based on survival. The process of surviving can often be measured in many different ways, one of which is the combination of physical health and stamina. In Hevn there are several attributes, and related thresholds, that are related to health and can be used by the player to make important decisions during gameplay. Whether it's food, water, shelter, location, information, defense, tools, mental stability, etc, we want the player to be aware of their own state. On the other hand we don't want to force the player to have to micro-manage health, so changes over time will likely be subtle. Not to mention there will be feedback visually and through movement.

Below is a list of the current working player attributes and how they can impact the player. All values are essentially rated between 0 and 100, where 100 is good and 0 is, well, not so good.

All of these attributes are important values themselves, however they also play a key role when grouped in determining the overall health of the character (especially sanity). For example, if the body temperature of the character gets too low for too long, the character's sanity might lower over time. Or if the character has no energy left, the sanity and movement will be affected. Or if three or more non-priority limbs are severely damaged, the player's mobility will be compromised. Conversely, if a player's sanity is too low, perhaps resting on a bed might help. Or maybe finding a well maintained body suit might help. Or even the act of finding food/supplies might improve the body and spirit.

Note that a general numerical health value is provided when the character equips a helmet (as part of the biometrics system). This is mostly just for reference though since in some cases the player could be in trouble mentally, while physically they are perfectly fine. Here's a shot of the helmet HUD with an "estimated" health value in the upper right. 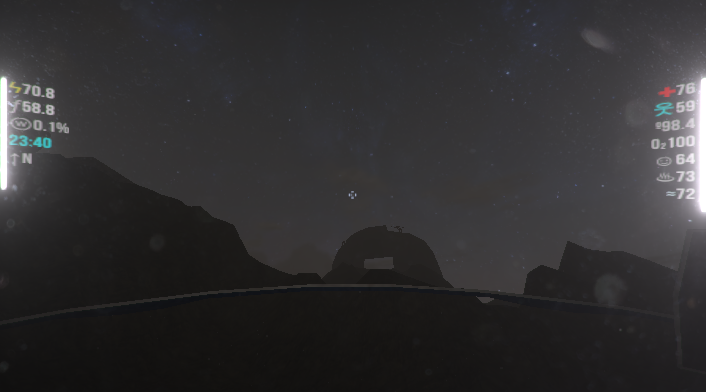 Several of the above attributes also have corresponding thresholds, some of which can change during gameplay. A typical threshold example is body temperature. If the body temperature drops too low, hypothermia sets in. If it increases too much, hyperthermia might set in. In the case of maintaining a steady body temperature, it's important to be properly equipped when traveling outdoors (i.e. wear a body suit, helmet, and shoes). It is possible to travel outdoors without equipping these items, but depending on the time of day and temperature outside the player's health might be compromised.

This same concept applies to other attributes as well, such as thirst/fluids and dehydration, sanity and anxiety, etc.

Currently there is a health menu in the game, which is contained in the "Biometrics Feedback" menu. This menu contains two panels that summarize the health and well-being of the player's character. Below is a screenshot of the current menu with the left leg selected (highlighted in yellow). 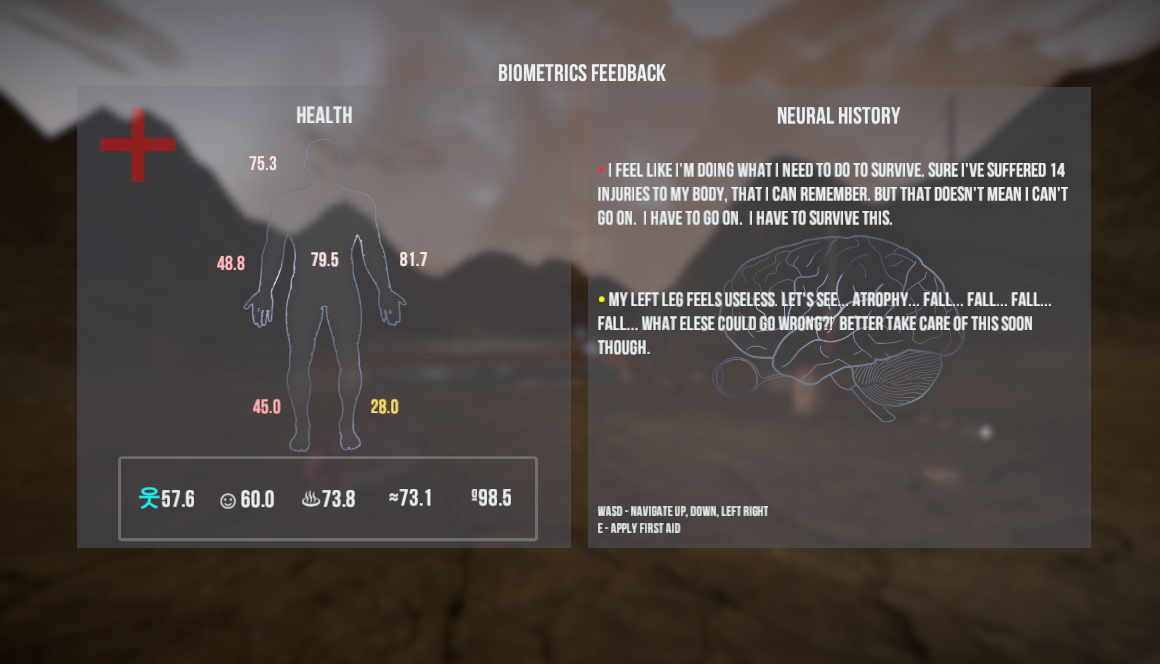 The health panel contains the health values for each body part as well as the stamina, sanity, hunger, thirst, and body temperature. The lower the value for each body part, the closer the text color changes to red. All of the values in this panel can be navigated (and thus selected) by using the keyboard. Currently the WASD keys are used to navigate through the attributes. A brief summary of the selected attribute is provided in the "neural history panel", which is discussed below. Here's another example of the current health menu with the stamina attribute selected. 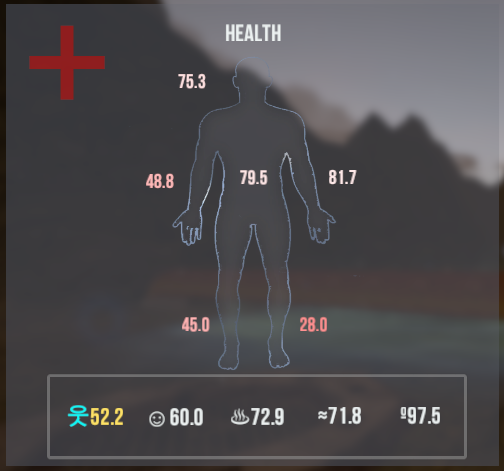 The neural history panel provides a short summary of the character's thoughts on their own health. (In a sci-fi sense this is done through biofeedback and neural components embedded in the player's character.) A brief summary is provided for both their overall health as well as for the selected attribute in the health panel. This also contains memories of injuries, hopefully to help reinforce the state of the character. Here's an example for the stamina attribute selected above. 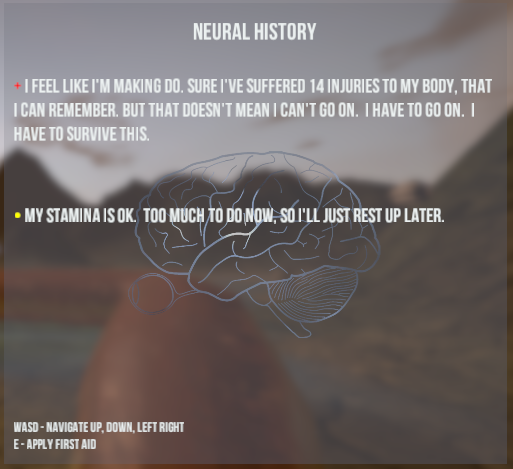 Hopefully this provides a mechanic to build upon for character empathy, AI, and also to the immersion. Not to mention just to make the game more fun and engaging.

Well that's it for now. Thanks so much for reading!