Greetings Fellow Avatars!
Here’s what we have for you in this week’s edition of Update of the Avatar: 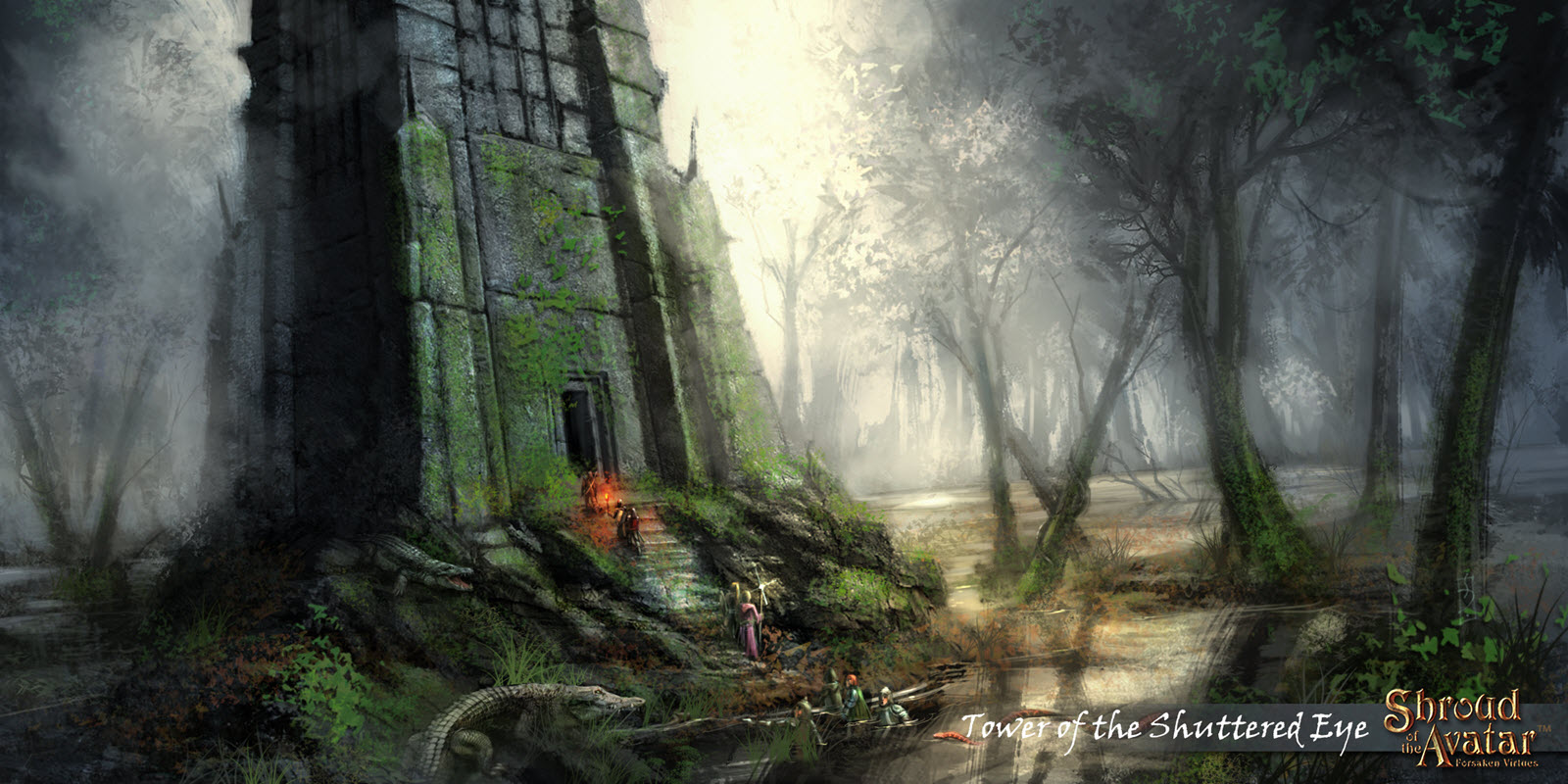 Tower of the Shuttered Eye
The Tower of the Shuttered Eye appeared in the swamps of southeast Novia not long ago. No one saw it being built, because few ventured into the swamps other than those in search of rare reagents from time to time. As soon as it was known to be there, rumors began to arise about its inhabitants and their activities. Some visitors find the tower empty, filled only with cob webs and rats, yet others, who visit on dark and stormy nights see hooded figures going in and out by torch light, often followed by lightning and thunder emanating from the top of the tower. Today, most avoid these swamps altogether, even those who seek rare reagents usually seek elsewhere!

Look for the Tower of the Shuttered Eye in Release 12, launching November 20th!

Pen of the Avatar: The Tower of the Shuttered Eye!

If you missed the Pen of the Avatar: The Tower of the Shuttered Eye with Stephen Daniele earlier this week, then check it out here:

You can find all of the Pen of the Avatar episodes at: Shroudoftheavatar.com

SotA Community is Rockin’ It!
It is about time, in fact overdue, that we begin to more publicly celebrate the wonderful community of composers whose work is now showing up in Shroud of the Avatar.

For SotA, I have had my heart set on finding music that hearkened back to the golden age of our work on the Ultima series. For me, the music composed by Iolo and Ken Arnold remains the best music of the series. Not that we have not had great composers since… we have. But there was something compelling about the simple memorable melodies, that most modern games lose in their hugely orchestrated scores (very much like movie scores). While I hoped we could have fuller music, I hoped we could reign in the desire to go overly large, and provide players with tracks that not only felt right for the area and happenings within the game, but were also both memorable, yet not annoyingly repetitious. I knew going into it, this would be difficult.

To be honest, when we first faced the problem of musical compositions for SotA, I was lost. We got bids from a number of composition houses, that both far exceeded the budget we had available for this crowd funded game, but also, and perhaps more importantly, their demos were far from the soundscape target I was hoping to achieve in SotA. We were stuck. We tried buying music off websites that had affordable music on them, but even after enormous amounts of searching, I found little that felt right. We started down that path though because of budget reasons, never feeling quite right about it.

Then YOU, our wonderful community, stepped up. People asked why they could not submit music tracks for inclusion. My initial thoughts, and even my first response to proposals, was lukewarm at best. Early offerings from the community were far from the mark I was hoping for. While they were often great pieces of music, they generally were either too modern, too orchestral, to much like a movie score, did not sound period enough, or were well off target for some other reason. I did not believe this was going to work.

Then Holt Ironfell of the Poets Circle contacted me and asked a simple question: “Please tell us, exactly what you ARE looking for.” Only at that moment, did I realize what a disservice I had been doing the community. I quickly made copious notes to clearly articulate what I felt was, and was not, music I would hope to find for SotA. The Poets Circle (and others) then went off, formed their own councils for peer review, and raised money when needed to acquire equipment and software. Then a few short months later, the community started to submit new work.

I was literally moved to tears, to hear what amazing work this community, all of you, have been able to produce. In a few short weeks, we went from ZERO accepted pieces of work, to about 100%! While for some of the MOST complex work involving Virtues and pieces that must play together, we have had vigorous exchange to “get it right”, the VAST majority of work now done by the fine Poets Circle and many other members of the community, deserve GREAT acclaim.

I know others will wish to do as I have, which is build a music list to play throughout my home, of the wonderful inspirational work of our community! I would like to highlight a few now, and more in coming months:

This is a fine example of the primary goal I set for the musical environment of SotA. To me it has all the qualities I sought: First it matches the scene description very well “Beautiful Meadow”. It is both atmospheric and melodic without annoying repetition. It is not overly orchestrated, and sounds like something of the world. While not purely period instruments, it does not take you out of the period feel. Lovely!

Tackling the dungeon, and other more unusual environments, was always a weak point back in the Ultima days. Previous works were environmental but rarely melodic. Sir Wombat does a great job with this piece to accomplish the goal of building a more environmental and disquieting piece, without losing the melodic values we seek.

Those familiar with the SotA backstory represented in Blade of the Avatar, know that the Elves of our world were created by the Obsidian Kabal as powerful combat troops for their attempt to dominate the world. Yet on SotA, you will meet the Vertas Elves, who (like Star Trek Vulcans vs their Romulan ancestors) have given up their warlike past and become peaceful truth seekers. This piece captures that perfectly!

Richard captured perfectly the confidence of the city builders of New Britannia, coming back from the brink after the fall of the moons and the obsidian cause. The hope, the power and confidence show through in this masterful, properly balanced piece.

From the master bard himself, has come many tunes you will hear going forward. But this early piece remains a favorite. The fauns of New Britannia, live lives of enslavement, yet, when they occasionally are free of the domination of their wretched Satyr masters, they frolic in the meadows and joyfully celebrate the world and possibilities. How they can remain so positive deep in their souls proves the real value of this race.These are but five of the dozens of wonderful pieces we are proud to have in the game, and will be showcasing in coming weeks to you here with these updates.

By the Virtues!
Lord British

Wow! Concurrency, first time users, total hours, average hours, and pretty much all the other stats were through the roof for this release. Everyone of these metrics was up at least 50% over release 10, which was up something like 50% from release 9! We spent several days cleaning up exceptions, spammy log messages, and getting down to the bare minimum log messages for this release to make sure we’re only looking at real data. Even after all that, our metrics box recorded 19,937,381 events in the first 24 hours the servers were open! Yowsa!

Before I jump into my usual fun stats and then my stream of babbling, I wanted to throw a few theories out for you guys to discuss as to why numbers were so much higher.

So I think a large number of the 1000+ first time users in this release were an unexpected side effect of getting onto Steam. For whatever reason, many people were just not interested enough to deal with figuring out our downloader, but Steam made it easy enough that they were willing to install and play. Maybe it was people now believing that because we were on Steam we were somehow a more legitimate game? Maybe the Steam “collectors” who just like to collect more and more games and decided to give it a try since they already had it installed?

I believe that it also had to do with progression finally being in the game, if only in a limited way. Many people don’t like playing without feeling like they are accomplishing something so playing a game with no advancement is just not fun. I think word got out pretty quick that we were also leaving the servers up for a few weeks, which also got a few more people interested.Ok, now for some numbers!

[Read the rest of Chris' post in the forums...]

Included in the Lord Marshal pledge rewards is this special automaton servant befitting your regal status: 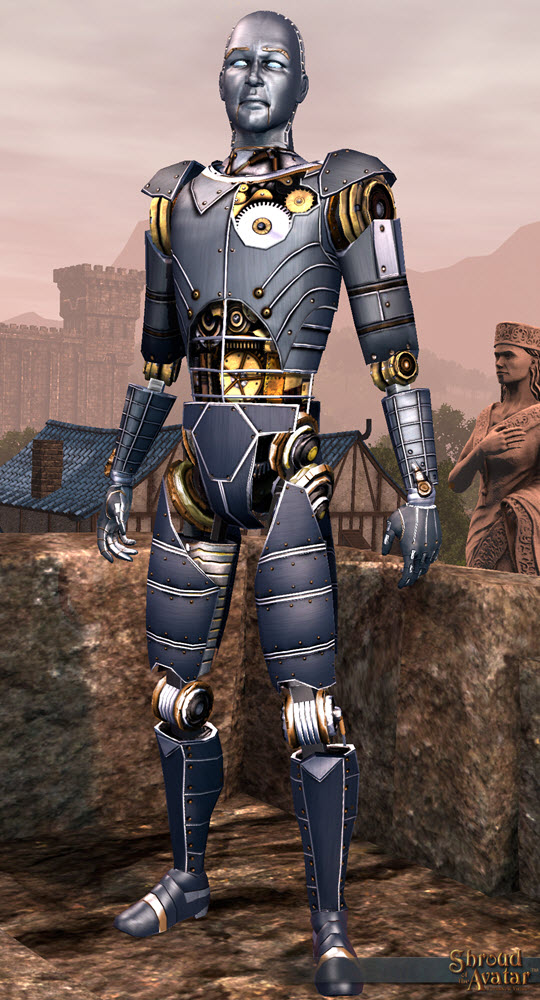 As we have mentioned previously, we intend to maintain continuous up-time (versus 4-day access windows) once Shroud of the Avatar launches on Steam Early Access on November 24th. In preparation for that event we decided to leave Release 11 open to see how the game handles up-time longer than the usual 4 days. So far so good!

The Grand Tour Quest
Just as in our last release, we’ve included a Grand Tour Quest designed to guide you through all the new content. And just in time for Halloween, you will be able to get the Tricorn Hat with Carnival Mask by completing the Release 11 Grand Tour Quest. This reward can only be unlocked until we launch Release 12 (did someone say rares?), so be sure to log in to R11 and talk to all the Tour Guides!

SotA will launch on Steam Early Access on November 24, but we’ve made Steam Access Keys immediately available to all our backers as part of their basic pledge rewards! Once you’ve redeemed your Steam Access Key you’ll have the option of playing SotA either with the Steam client or the regular client (or both).