In this weeks update notes we will talk about the new damage model added to the game and the new and intuitive movement controls.

After a week of intense development we can finally post some news. We finally implemented the previously mentioned damage model using pixselshaders and on a less interesting note the new but very intuitive movement system. We had to change it from the previous WASD controls as the right hand was way to overcrowded with weapons and movement, and during play tests we just weren't happy with it.

The damage model is pretty basic as of yet but enough to ensure that the player sees which module is damaged and which are destroyed and thus inactive. The players will get a nice HUD display of their modules. As you can see in the picture it is basically just a damage texture overlay which becomes darker and more pronounced the less hit points remain. When the module is inactive it more or less disappears into the background until it's completely repaired. 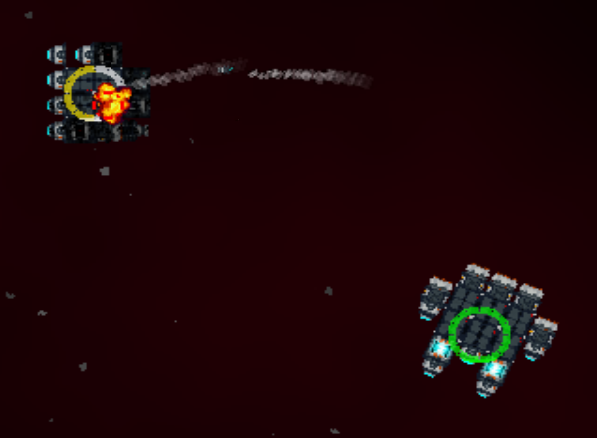 The ship, as of now, is only destroyed when all modules are at 0 hitpoints. This might change in the future as most ships won't be able to do anything at all with on 3-4 modules and are already destroyed beyond repair thus just annoying for the player.

The new movement controls are completely mouse based. Pressing the right mouse button and dragging the cursor creates a target position and the direction the ship should arrive in. The computer than predetermines the most efficient route to that point. It depends on the turn rate and speed of the ship and thus is different for every ship. This new way of controlling the ship allows for more stress free access to your abilities and weapons. The players are no longer preoccupied to realign the ships front towards the enemy and thus can focus themselves on using their abilities. In the picture you can see the dotted line which shows the calculated path and the dashed line at the end which determines the finally orientation of the ship. This curve is updated to the ships position thus when the ship is already moving you can at any point decide to turn around and you will always see what path it will take. This should make controlling the ship a lot easier and relaxing than with the previous version.

Next up on our list is the implementation of all abilities and weapons, and then adding the in game HUD! See you (hopefully) next week =)