New update about World map,combat and meaning of time in game play. New pictures added to gallery as well.

One of the main aspects in the Mythos The Awakening is map game play around the World. Player works as mastermind behind individual investigators who travel around unraveling mysteries,following clues and fighting against Eldricht beings. Investigators are persons with different backgrounds,agendas and proficients, usually men-and women of science are best suitable to handle cosmic energies so called “spells” while a private investigator and former boxing champion take cares of fighting against abominations. All of them have one goal to stop awakening of the great old ones but not everybody are contributing with most chivalrous agenda. 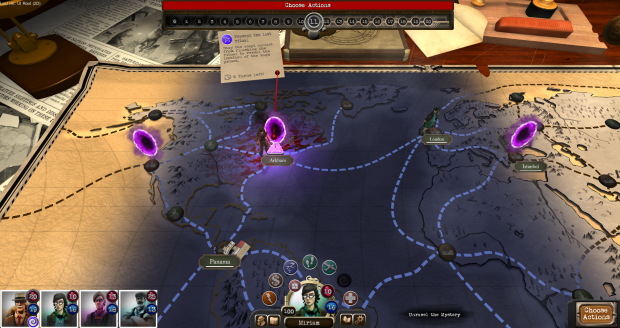 Colorful group of investigators ready to unravel mysteries in Arkham

Locations shown on the map play important role in the game play. Named major cities and locations works as places to investigators to gain equipments,weapons and even spells which will help them on quests. There are even certain locations with pubs where the player can hire new investigators to change or replace deceased or mad investigators.

The Great Old Ones are not just watching, they are actually fighting against investigators, though not having physical form (at least in early game) they can still spawn gates and monsters to locations. Ravaging monsters and cults on cities will decreases locations sanity and when inhabitants in the location fall to total madness, whole city is lost and investigators can’t get any equipment or heal themselves in hospitals.

While dealing with these tasks around the world, the player has to manage each investigator’s sanity, health, gear and money, as well as each major city’s sanity level and the global sanity level. If player fails too many of these tasks and theglobal sanity level goes to zero, then the ancient one awakens and starts to annihilate the world city by city. After every turn there are numerous things that can happen, these can be good or bad for the player. For example spawning new monsters or even police forces dealing with some of monsters.

tough situation, help London or get rid of that Deep One before it cause harm in Istanbul?

Choose time to fight or run

Day and night cycle have also important aspect in the game. Some monster will be stronger in the night time and without source of light, investigators accuracy in combat will suffer greatly. Also it is always scarier to travel in darkness.

Combat in the game is card based, weapons, items, skills and spells act as your cards which you collect throughout the game. Each investigator has their own skill set so cards handle differently depending on which investigator is using them. For example spell-casters aren’t great at handling firearms and the weak minded might be driven mad if they try to cast spells or they can even backfire. 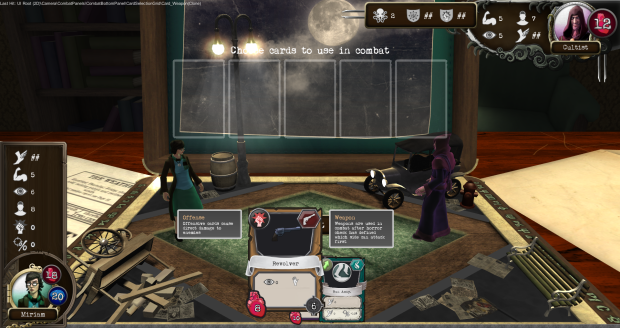 The encounters, except for the monsters are text based multi choice tasks, where every choice can lead to different outcome depending on the investigator handling the encounter. Your choice can lead to another encounter in some other location or you might gain an item, regain health, suffer sanity loss or even meet your untimely death.

you can also check out our indieGoGo campaign Indiegogo.com