A short update about the current status of the mod, beta-testing and the intro-movie.

As it has been almost an eternity since I've made the last update and there is actually good news, here's finally a new update - I'm sorry it didn't come earlier.

About the progress:
The voice acting, which took the most time since december, is completely finished.
Because it really was a lot of work and there was a problem with one of the voice actors, it took much longer than I expected, but I think the waiting really paid off and I'm absolutely happy with the results. I'd like to once again thank all the involved voice actors for their time and work and for the awesome voice-acting.
I'm planning to make a new trailer before the release (allthough I'm not sure if I have enough time), which would include some voice acting so you can have a little foretaste.
All in all, I'd say Nuclear Cataclysm is shortly before having beta status. A few weeks ago, I've conducted a small "pre-beta" test of the mod which went quite well. All the important mechanics worked and there were no major bugs or errors. Now I'm working on all the small bugs and problems that were brought up by the test (I have a list of almost 180 points, sigh).
And when this is finished, the mod has beta status - which means I'm going to conduct a larger beta test. And if the test turns out well and I've solved the problems that will probably come up, it's finally time for the release! (But please don't ask when, I have no idea... :b )

Besides solving the problems of the pre-beta test, I'm also working on the intro-movie of the mod. The intro movie is a short clip played at the beginning of the mod to explain the story and give all the necessary background information. I already have about half of the movie and I think I can finish it pretty fast. Maybe I'm going to uplaod it once it's finished, but I think it would be more exciting if I don't spoiler too much.

As always, here's a little screenshot. It's a still out of the intro movie, because I don't really want to show much more leveldesign to avoid too much spoilers. Maybe you know what's going on on the screen...? 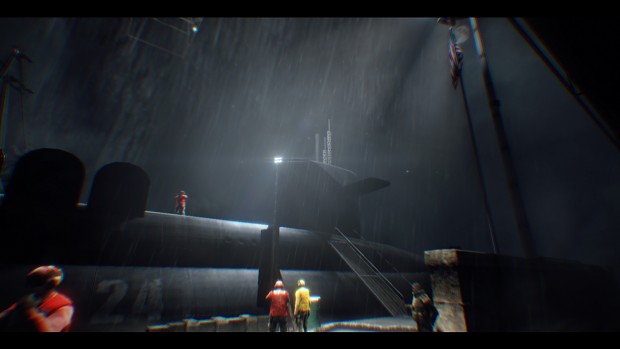 I hope you guys liked the update. Feel free to leave a comment and thank you for the nice comments in the last update, they're really encouraging :)

wow, seems you have done a big step forward release :) its really nice to read :) did you also already included all the voiceactings into the game? ( i ask because i myself stuck in this situation and its so hard to motivate myself to do this slave work :D :D )

Very glad to hear about the hard work to include voice acting in addition to the rest of the work. I have been playing StarCry on and off, and the lack of English voice acting in that mod does hurt the experience. Please press on :)

Thangs guys! :) @pvcf, yes, it's all fully integrated and working. I know it's very unpleasant work, but the final result, to play the mod with all the speaking characters, was enough motivation for me :D It also helped to make clear structures and do one part after another.

Can't wait to play a new mod for Crysis looking this good you should be proud.Been waiting ;)

Great to hear everything is going smoothly! Can't wait to play it.

Any new updates on the horizon?

Yes, there will be a new update in the next few weeks. And I think it's going to be quite big! :)

Can't wait for the update? How has the beta process been going? : D

Sorry for the waiting. The update will come this weekend with info about the beta! :)