DwarfCorp is a free market capitalism sim and 3D DF-like. This update is about career tracks.

Posted by CompletelyFairGames on Aug 3rd, 2013

We're a mere $300 or so away from our goal! Thank you to everyone for your support, and for spreading the word! It seems we are certain to hit our goal today. This update will be about Dwarf Classes and Career Tracks. We got many questions about the pitiful class tree we mocked up for the Kickstarter. This tree is just a mockup, and is intended to show that the game will have a class tree. We wanted to clear this up, and provide more details about how Dwarf Classes and Career Tracks work in this update. 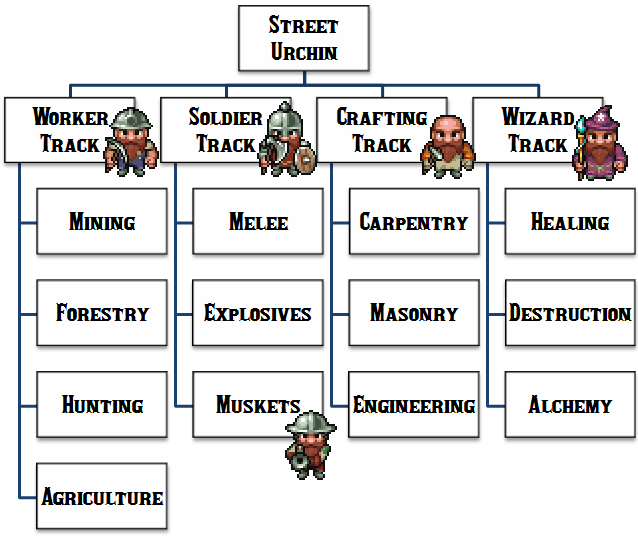 Like any good Dwarf Corp, your company offers many opportunities for career advancement in the Dwarven world. Many Dwarves in the motherland live miserable lives as street urchins in the crowded tunnel shantytowns near Dwarven cities. Many Dwarves from the motherland wish to flee to the unexplored lands beyond the sea in order to improve their living conditions.Once a Dwarf comes to your colony after living in the tunnels of the motherland, he or she can be assigned one of several career tracks. These are areas of specialization that young Dwarves can choose to hone their skills in. By choosing a career track, a Dwarf commits his or her life to that track, and may not switch from one to another.Career tracks restrict what kinds of activities a Dwarf can perform well. Their job description affects which tasks they will be assigned in your company, and how well they will perform those tasks. In each Career Track, there are several Dwarf Classes. A class is a further specialization in a particular track. For instance, in the Worker track, a Dwarf may choose to be a Miner, a Hunter, a Lumberjack, or a Farmer. From there, his skill increases over time, and he will become a master of that trade.What's listed here likely isn't the full list of classes and tracks which will appear in the game, but it does list the basic specializations we wish to cover.

Dwarven workers form the backbone of the colonial economy. A Dwarf who chooses to be a worker may choose to specialize in mining (breaking stone), forestry (chopping trees and gathering plants), hunting (which will give him use of the bow), or agriculture(where he can harvest mushrooms and wheat).Workers are easy to keep satisfied. Management tips: provide plenty of ale and adrinking hall.

Mercenary soldiers protect your colony from dangerous beasts and savage natives. If kept well fed, trained, and rested, they can be the difference between your colony's life and death. Soldier classes are divided by which weapons members of that class specialize in. Axedwarves specialize in the use of the Axe and shield. Grenadiers use rudimentary explosives to break down walls. Musketeers use slow-loading ranged weapons to take out foes from afar.Soldiers must have access to a Training Room, or else they will go out on their own to find things to sharpen their blades on. 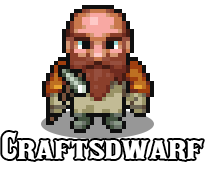 The Dwarves are in the midst of an industrial revolution. Skilled craftsdwarves drive Dwarven the economy by producing mechanisms and industrial machinery. Craftsdwarves' classes are defined by what items the class is best at producing.Carpenters take wooden stocks and turn them into wooden walls, weapons, and traps.Masons use stone to improve and polish stone walls, extract gems from ore, and build great stone doors. Engineers are modern-day blacksmiths, turning iron into steel, constructing machinery such as coal-fired engines, and building mechanical traps.You will likely only need a few craftsdwarves in your colony -- as they demand a very high wage and a lot of attention. Not all craftsdwarves are created equal. Those with lesser skills may produce lower quality equipment which may fail altogether! Craftsdwarves may improve their skills by practicing in workshops.

In DwarfCorp, magic is an understood, academic phenomenon. Dwarven wizards engage in careful study of the magical world, and write research papers on its effects. If you decide to hire a wizard into your colony, he will make great efforts to research new magical spells which you can use to your advantage. Wizard classes are defined by their area of magical study. Healing wizards specialize in curing the sick, mending wounds, and resuscitating the dying. Destructive wizards research new ways of using magic to burn, freeze, and electrocute your foes. Alchemical wizards create potions which other Dwarves can use for whatever reason.Wizards can be a powerful (but costly) asset to your colony. Mere acolytes may at first be more of a hindrance than a help to your operation, as they may produce spells which simply do not work. Masterful wizards could turn your operation around completely by providing you a powerful leg up over the competition. Wizards do their fundamental research in laboratories.

Each Dwarf has a set of statistics (or stats) which describe how well he or she does certain tasks. DwarfCorp does not have a fixed stat system like many role playing games. Instead, each task a Dwarf can perform (like mining, chopping down trees, or using a particular weapon), which is defined (mostly) by what class and career track that Dwarf is at.By performing the fundamental task associated with his or her class, a Dwarf gainsexperience. When a Dwarf gains the necessary experience, he or she may level up to a more specialized, masterful class. All Dwarves start as interns of their class, and will acquire different titles as their class dictates.