Greetings everyone! Once more, we are back with some new updates, the biggest one being our combat system.

Greetings everyone! Once more, we are back with some new updates, the biggest one being our combat system.

Patch 0.10r88 added an alpha-version of the brawl mechanics. It’s a fairly large and complicated system with numerous hidden features. Some of them are only part-active since we have yet to introduce all the elements needed for them to work. For example, damage calculator does not account for certain attributes.

Dealing damage is an important part of the system and in the past we mentioned the calculations we intend to use – it’s akin to a tabletop game, where everything depends on the character’s attributes and a little bit of luck. The system calculates degree of success for each action, adding up the parameters of the attacker and subtracting the attributes of the defender. Each action corresponds to a specific set of parameters (two or more for each side). In addition to calculating damage, the system works out the possibility to block or dodge. In that case, a similar system is used but with a different collection of attributes.

Introduction of the combat system meant we had to add character progression as well. That’s right, now you can increase some of your stats. To do that you will need to use Blood and here is where a bit of lore comes in: from a vampire’s point of view Blood is not just substance flowing through the veins of mortals; it is their quintessence, their life energy. When a vampire feeds, he replenishes his strength by quenching his thirst and hunger. We rejected the idea of “health” status bar and replaced it with “hunger”, shown as a red bar in the UI. When wounded, the immortal being starts to heal itself, however this inevitably causes it to hunger. While feeding, the vampire can not only restore his energy; being devoid of it, he can also take some of it for himself. This is what Blood is, it gives the dead body an ability to improve its abilities and the more it’s developed, the more Blood is required to sustain it. 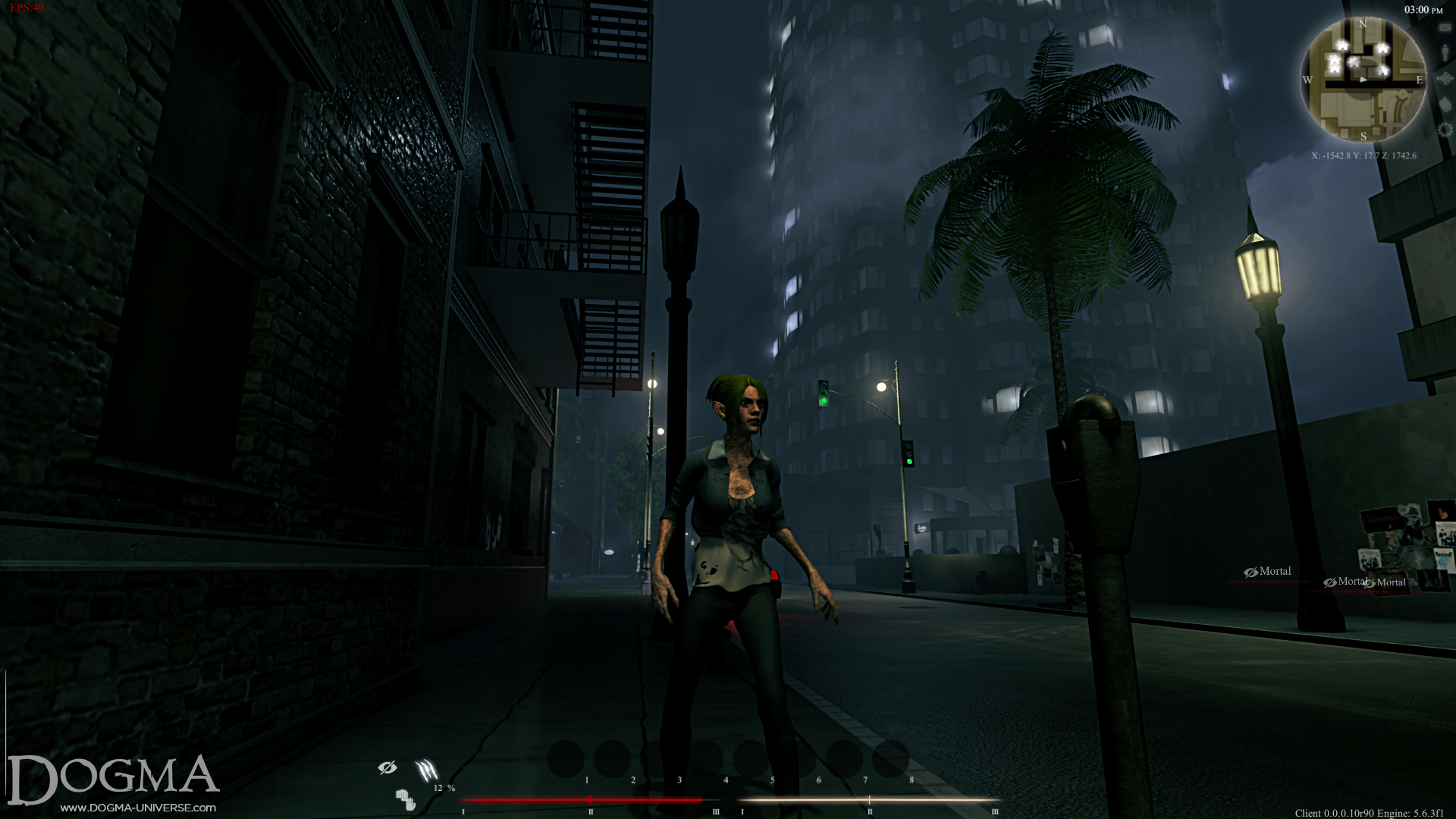 And finally, third part of our update – negative consequences of low Essence. By killing vampires and mortals, the character loses points in this indicator, which now governs more than just appearance and NPC reactions. If a vampire ends up in a situation where his body is consumed by hunger, and the Essence parameter is extremely low, he loses his ability to act and some of his attributes. He will need to get them back again, though at the moment it’s not that hard to do.

Right now the main task of the team is checking how all of these nuanced systems mesh and gel with one another. We aim to smooth out the rough edges at this stage, so we hope to get as much feedback as possible. It doesn’t have to be bugs, tell us about problems in mechanics or any other possible issues you believe should be raised. This is very important and will influence further development of the game. In the upcoming months the team plans improve some of the existing systems and introduce a few new ones as well. We want to link the recently added “passive” establishment missions and the combat system. To accomplish that, we’re working on a system of cooperative actions when competing for Influence and a system for Covens (if you don’t remember, in D:EN this is similar to clans and guilds). 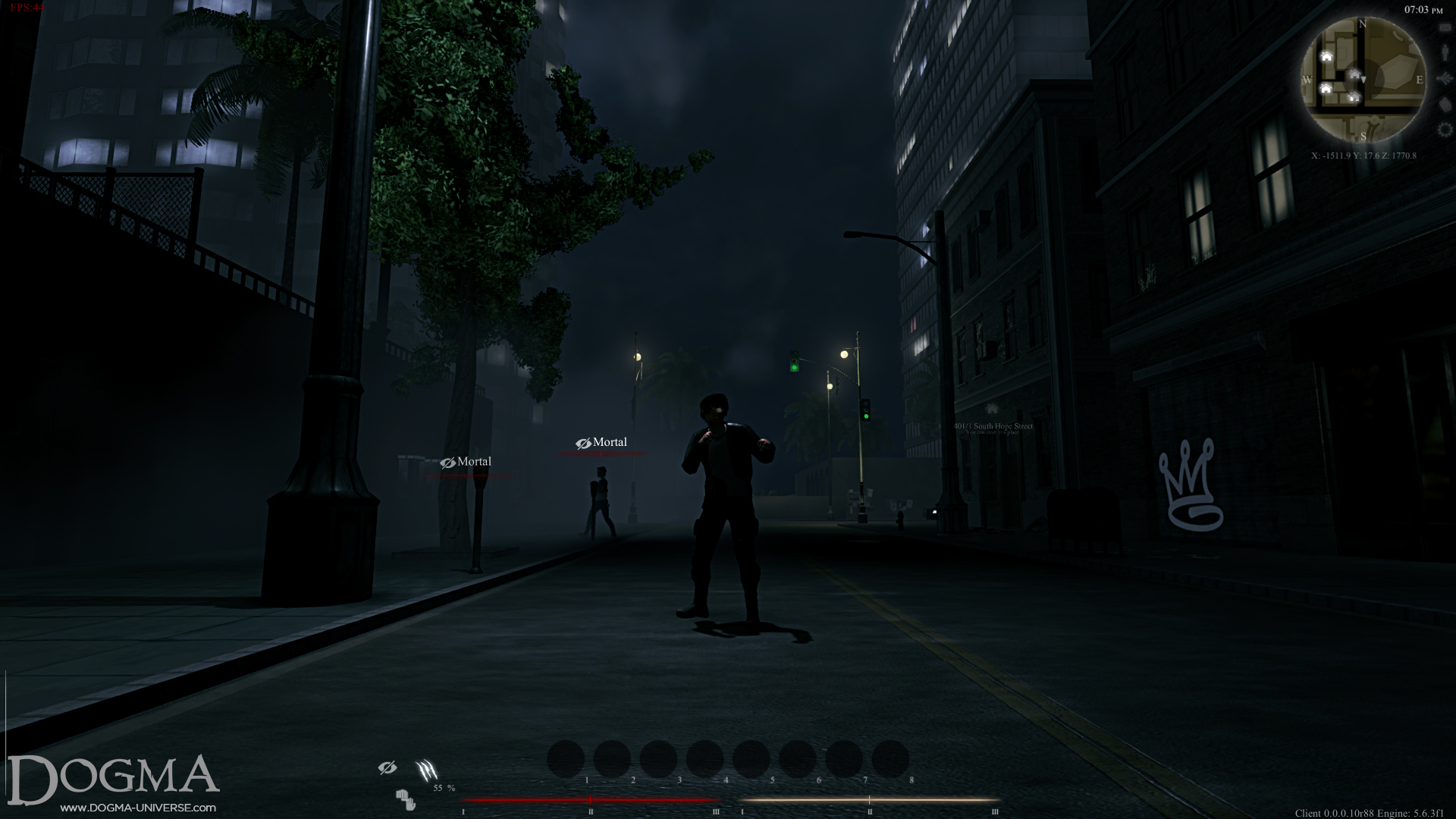 We didn’t forget our promise to add a new part of the city either, the team is still working on that but it ended up taking more time than we thought. Nevertheless, we hope that very soon you will be able to take a stroll through the new streets of our city.

Our crowdfunding campaign continues and with your help we reached the $25,000 goal. It’s a modest amount for an MMO project but our team does whatever we can to use your help to its full potential. With this goal achieved, we can expand our character editor, adding details like new hairstyles, beards (as requested), clothing and so on. We plan on expanding the body shaders so that we can add more layers for tattoos and makeup. First step towards achieving this is introducing new variants of skins for existing elements in the near future.

Two of our other goals are expanding the AI and adding Missions for player characters. It’s no secret that the current AI controlling the NPCs is fairly simple and needs improvements to make its decisions more intuitive. Next funding goal will let us work on that and add new NPCs that won’t just run away, but also fight back. We will add police that will protect the civilians, while in the dark alleyways we’ll place the criminals. Meanwhile, the slowly expanding Establishment system will add variety and changes to the NPC behaviour and various missions will allow you to try and compete for control over the city. We will start with simple tasks like searching and murdering key NPCs and gangs, interrogations and shadowing the targets. The end missions would be random events occurring in various parts of the city. All of this will gain characters Influence and Blood.

As you can see, we have lots of plans and all of them require great effort and hard work. But as always, we will do our best to reach our goals with your help. Check our social media for more news and we will see you later.