In this update we take a closer look at the train that will bring you to Tower 57! This is where the adventure starts...

Another week, another update!

This week we went into full Kickstarter preparation mode, so creating the storyboard for the trailer, drafting up a main page, coming up with pledges, budgeting stretch-goals, reaching out to our contacts, and of course working on the new locations!

The trailer will feature 5 to 6 entirely different locations, so that means a lot of new art, but also building the maps, setting up the scenes according to the storyboard, recording them, and much more.

The first scene as we teased last week will take place aboard the train taking you and your crew to Tower 57. Of course the authorities have been tipped off and things will escalate pretty quickly ^_^

With commercial aviation a thing of the past, the railway system has taken over as the main means of transportation. It is mostly frequented by the elite, who can afford the pricey tickets, a fact which is reflected by the relative luxury of the accommodations:

Of course trains are also used for freight, and will occasionally transport military or illegal weapon shipments, so be sure to check those crates for goodies:

Here is what it looks like when put together in the game: 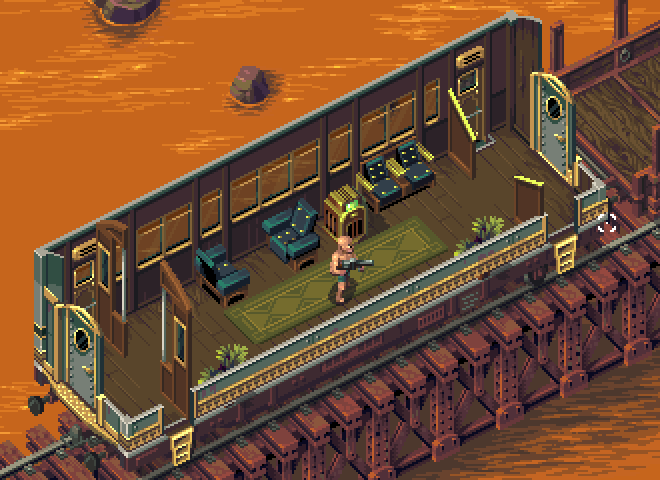 And to top it off, we added some nice “fading roofs”:

Next week we’ll move on to the next location : the sewers. Centuries old architecture, underground rivers of toxic waste, mutated enemies, and much more awaits!

I would also like to humbly remind everybody who's reading this that we setup a mailing list so you can stay informed of our progress with the campaign, and of course let us know if you think we are on the right track :) You can sign up over at Eepurl.com

Cheers everybody and have a great week!

25 updates! A milestone (of sorts?) and also, do the chairs have breakdown stages when you shoot them too? :)

not yet, but they most certainly will! yeah 25 updates, that's actually 6 months (and one week), feels weird to think about it ^-^ at some point I would like to post old VS new screenshots, it's crazy how much the game has evolved!

Beautiful art as usual !
I just wonder if making the roof of only one wagon transparent will be sufficient.
I mean that, in reality, in a train like that, you would see past the door (if they aren't closed) of your wagon and in the wagon before.
But as it actually is, when you approach the (open) door of your wagon you can't see more than 1 meter in front of you.
Why not making all the wagons in the field of view transparent (it may need checking if doors are open/broken or not) ? The wagons behind the characters would become covered (unless he turns around).
The other solution would be to make the door indestructible, or to ignor this issue, but it seems like it could be annoying.

that's a pretty good point actually! I like the idea of the view opening up once you blow up the doors, will probably end up changing it to do exactly what you suggested :)