This week we show a nifty little trick involving the background layer, and we also take the first peek at the intro level of the game!

We are also starting a mailing list for those who are interested in seeing more than what makes the cut for the weekly updates (failed experiments, bugs, more gifs, etc.), getting news and updates about the upcoming Kickstarter campaign, getting preview links to the campaign before it goes live to give us feedback, watch the trailer being built, and much more!

And now back to the update!

Despite working a lot on our upcoming campaign, this week we also continued work on the demo levels, plus we added a nifty little trick which I like to call “stacked floors” for lack of a better name ^_^’

Last week we showed off the parallax background layer (albeit slightly bugged, but we fixed that too!). This week we worked on what the parallax layer actually contains, namely … the previous level!

That’s right, with the exception of some specific sections (scroll down for a prime example), in most levels you will be able to step back and admire your work from above :) 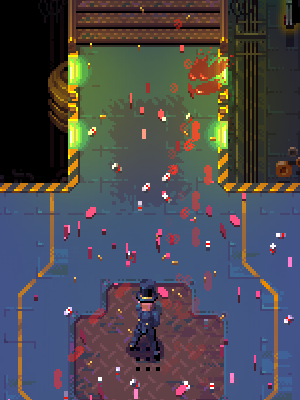 just got rid of some pesky hexapods 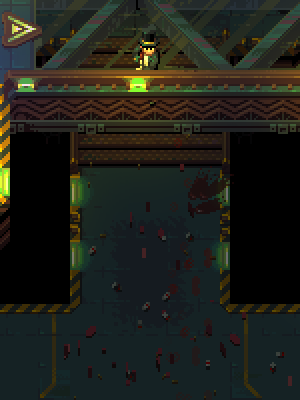 seen from the next level

The second thing we are focusing on right now, as mentioned above, are the demo levels. This week we worked on the game’s intro level, which sees you and your crew arriving at the tower (while commercial air travel vanished long ago, the towers are still linked by a decaying rail system).

Of course somebody has tipped off the authorities regarding your arrival and your purpose, so you will have to fight your way through the train wagon by wagon ;)

That’s it for this time, hope to see you all again next week!

Hey hey don't go around throwing spoilers :D ! And hehe thanks, as unsubtle as it may be, you're the only one who mentioned it so far ;)

Wait till you see the station ^_^

O-Man. Might be my favorite update to date. =D

Thanks :) hope you will enjoy the next one even more!