This week we attended the AMAZE ./Berlin Indiegames festival, and we had an absolute blast doing it! Here are some thoughts and pictures.

This week the update will be a little different than usual, as Cyangmou and myself attended the AMAZE ./Berlin Indiegames Festival, and the experience was nothing short of … well … amazing (in no small part because it was our first time showing the game ^_^’)

We took a few pictures to share with everybody, but what the pictures fail to convey is how incredibly satisfying it felt to watch others have a good time with something we created, and the amount of really good feedback we received from players, so much so that we ended up with a long list of changes - some of them pretty substantial - that we want to implement based on said feedback (more on that later…)

But first things first, the festival!

AMAZE ./Berlin was taking place at the Urban Spree, which is a “1700 sqm artistic and re-creative place focused on contemporary art and urban cultures” located on the banks of the Spree river in Berlin, Germany. 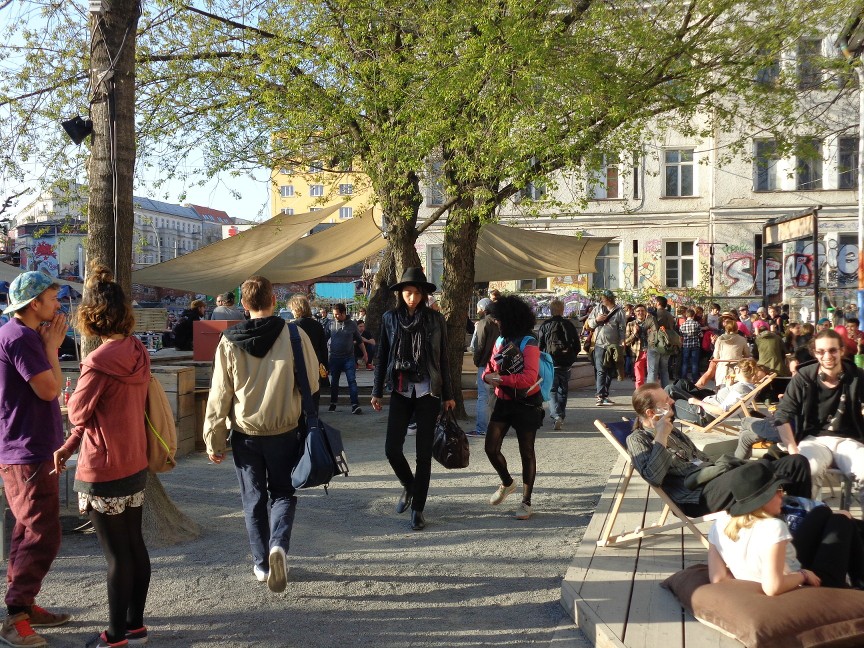 The crowd was a healthy mix of gamers, press, and publishers (which I didn’t necessarily expect) 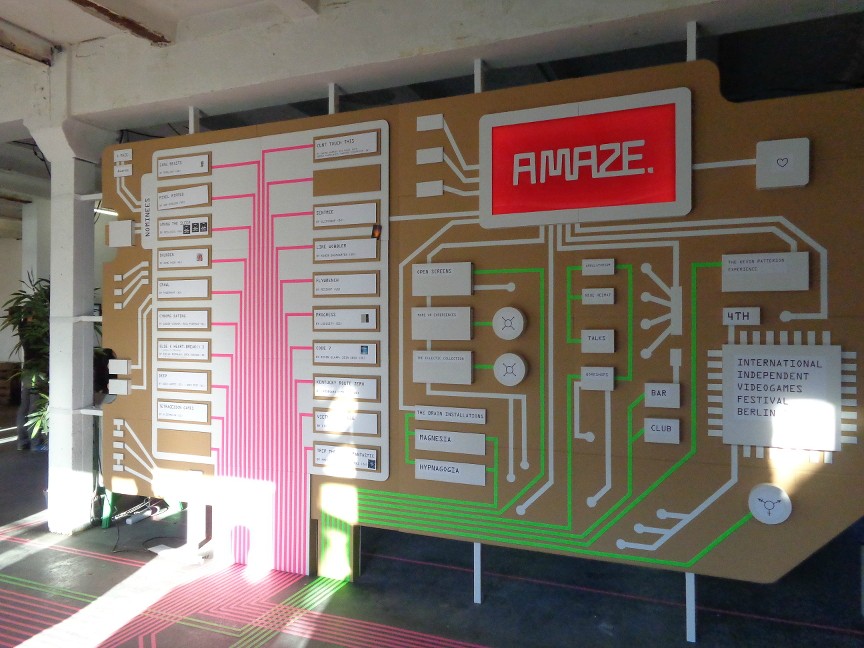 The main entrance, with a pretty clever display of the games nominated for the awards.

After being assigned our machine, we faced our first bump in the road: the game crashed at launch while trying to initialize the audio device! It turned out the sound library really didn’t like it when no output device was plugged in (that was also our first bug in what was to become a pretty long list!). Thankfully Cyangmou had a pair of earphones with him, so we were able to work around the issue, and we were ready to go! 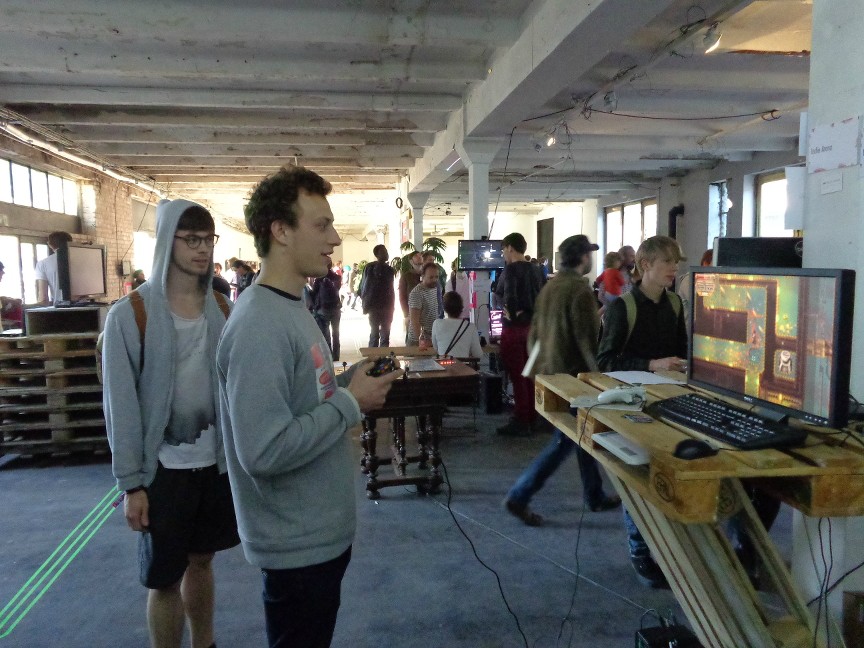 Yay, a player! (incidentally he provided very insightful feedback - if you see this … thanks man!) 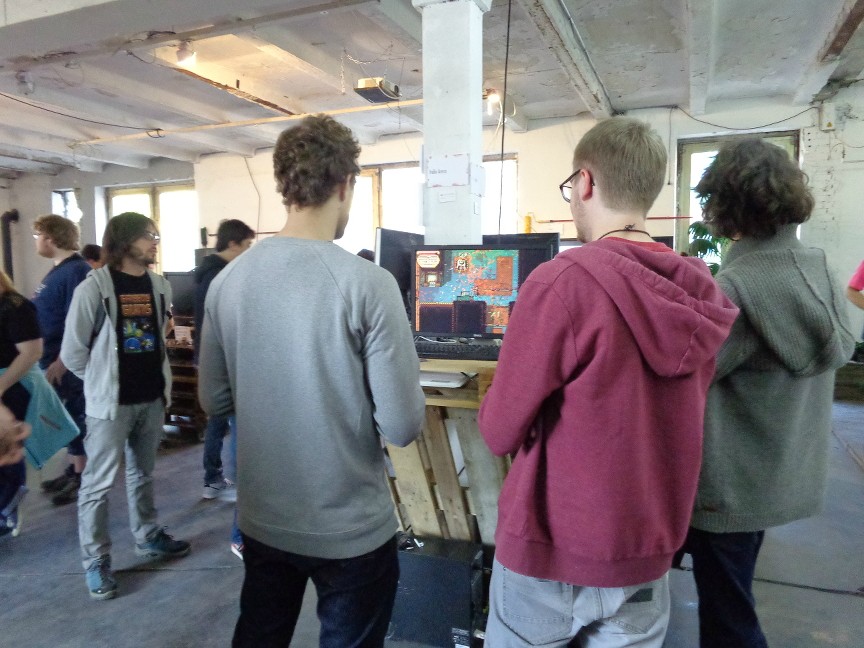 However our second bump in the road - one which would cause me to mentally facepalm throughout the rest of the day - followed soon after: everybody, and I do mean *everybody*, was running out of ammo barely 5 minutes into the game.

Guess we didn’t anticipate how much fun blowing s**t up would be ^_^ It got so bad that we started taking turns typing the ammo cheat code over and over (why I made that cheat code a simple “refill” as opposed to a more permanent “infinite ammo” is beyond me…).

As it became painfully obvious that we wouldn’t be able to interact much with players if we were busy repeatedly typing in cheatcodes, I decided to head back home to grab my laptop (mistake number 2: should’ve brought it along in the first place…) and make an emergency build.

One hour later I was back, build in hand, and we could finally let players have some fun and socialize a bit more with them! 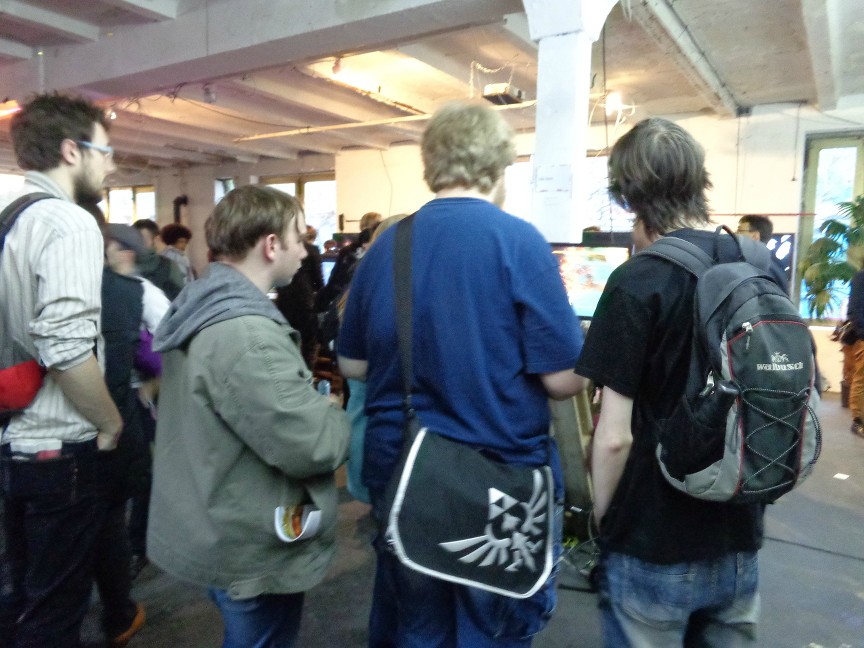 Props for the sick bag! 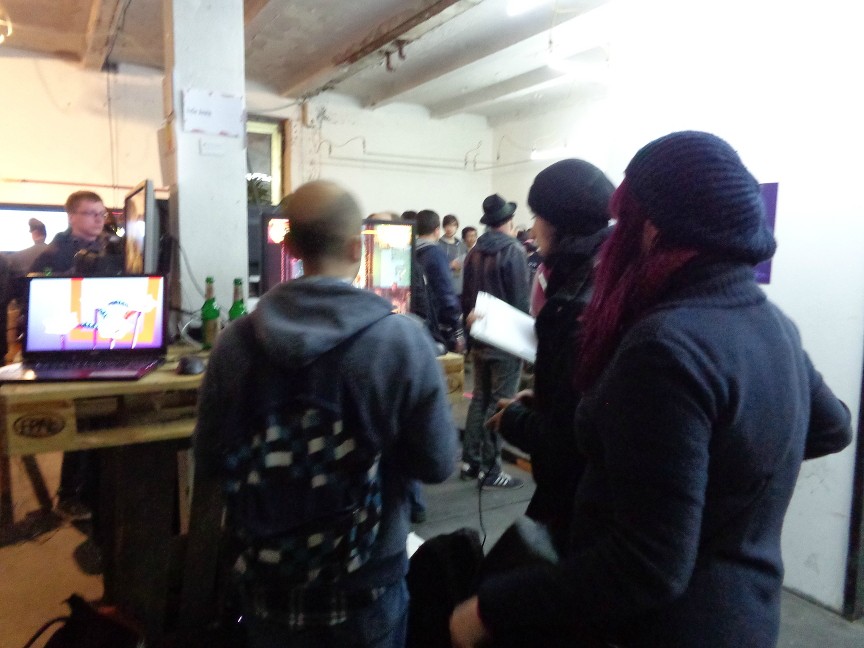 We also had quite a few girls try the game 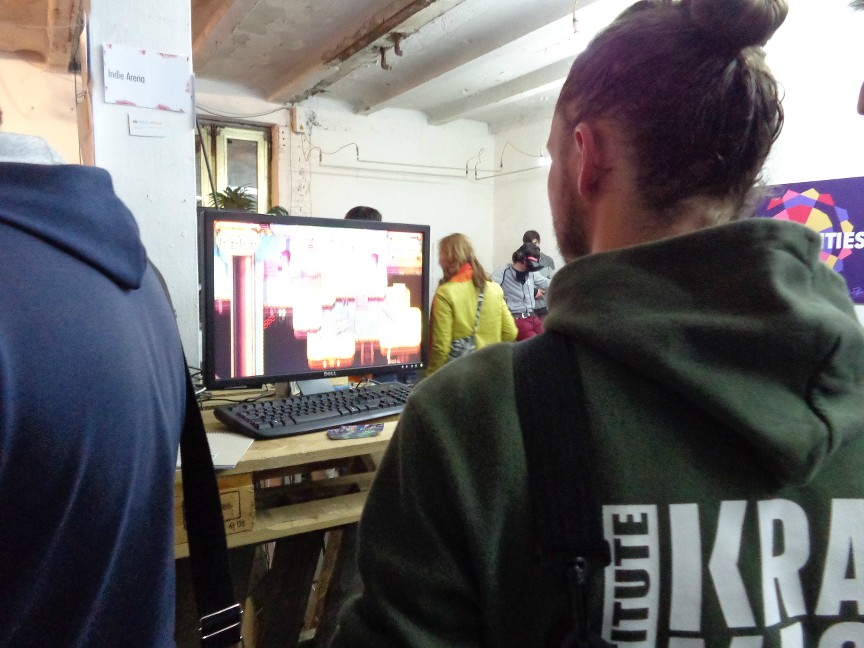 Discreetly watching somebody play. Not pictured: my huge nerd-gasm from trying to wrap my head around the fact that a stranger is playing my game and seemingly enjoying it

There were also some pretty cool “non-video games” (not sure what to call them?) such as Magnesia, a multi-player game where you drag metal balls around a plexiglass maze with your “controller” (a big fat magnet) and must deposit them in special slots to score points: 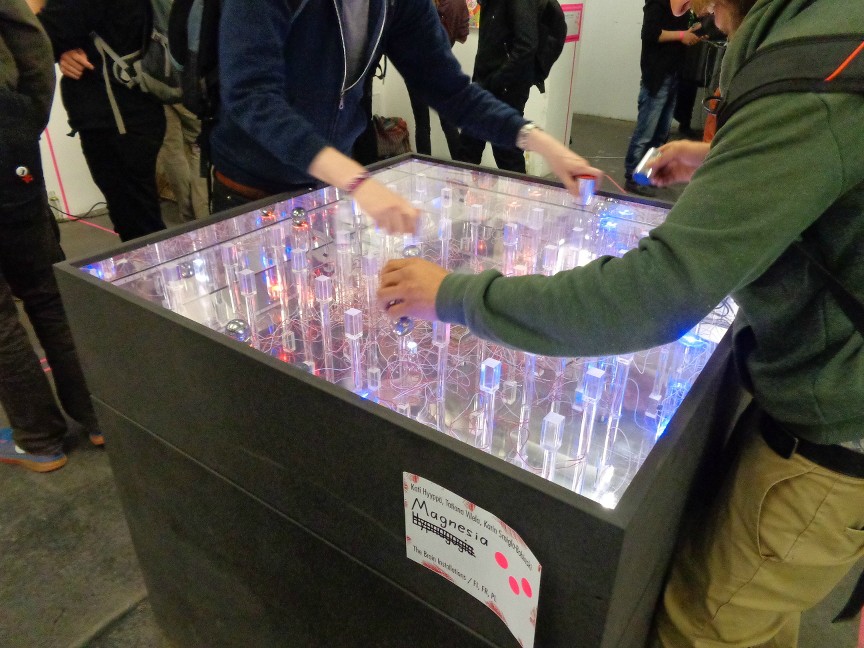 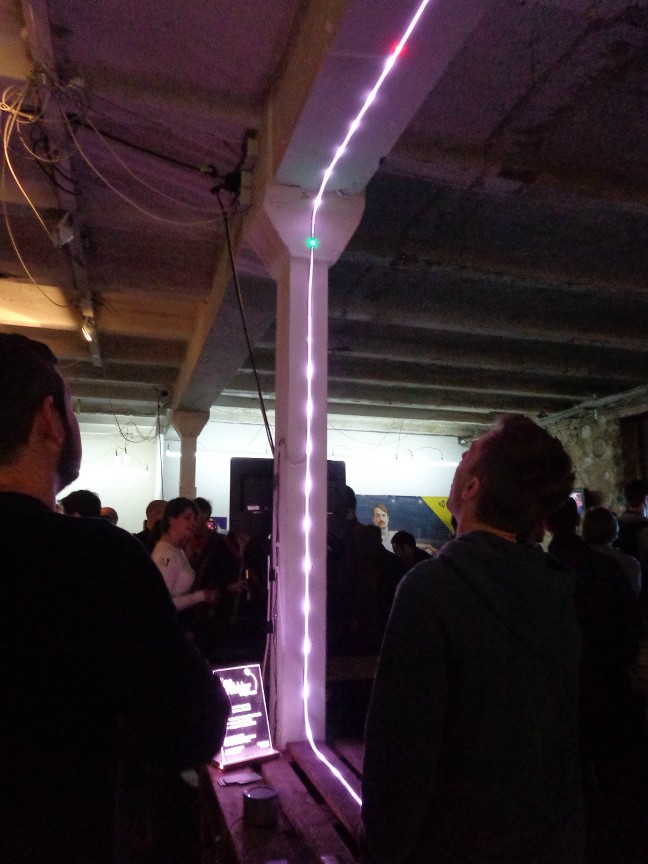 Alongside some pretty interesting VR games: 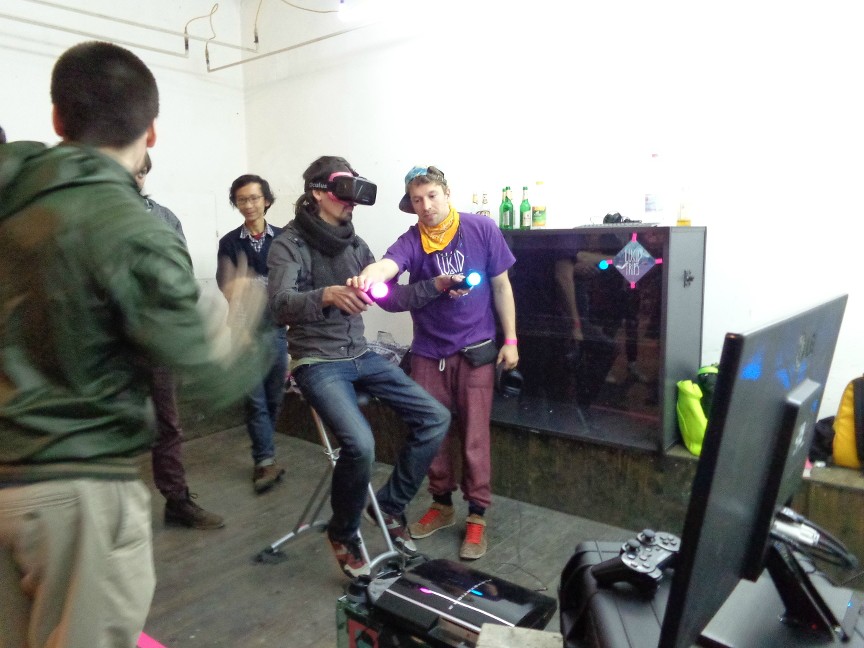 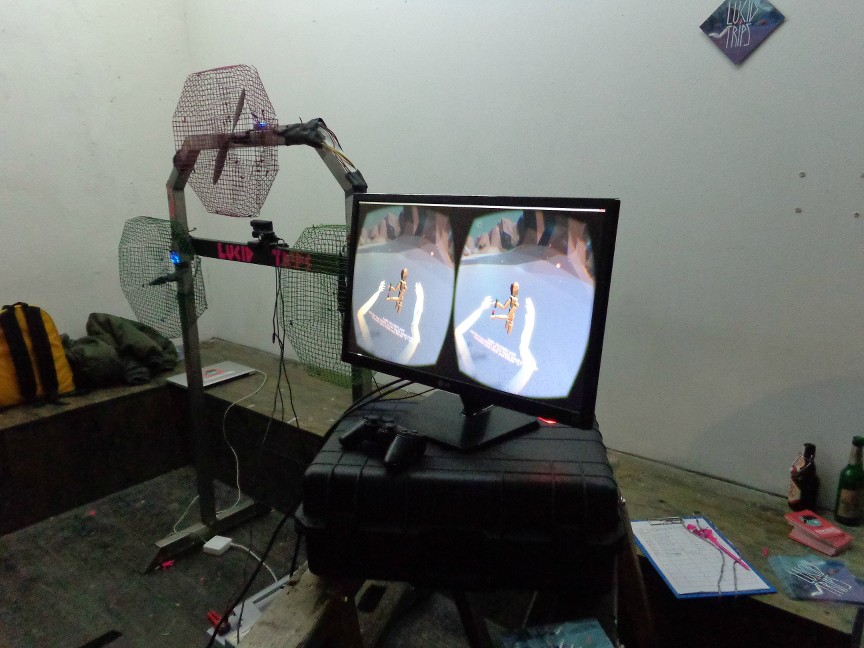 And of course indie-darlings such as Crawl: 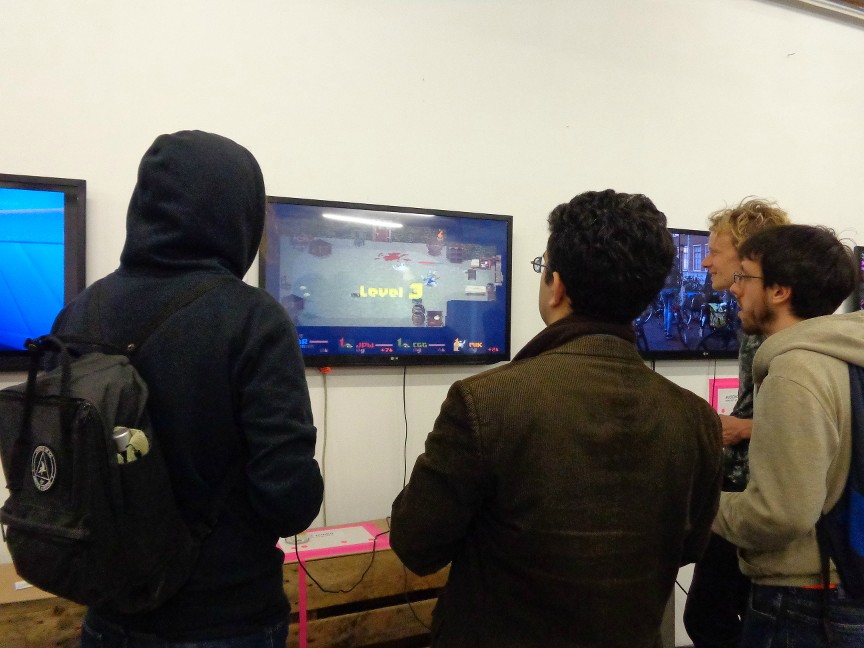 But before wrapping up the day, we had one more surprise waiting (and by “we” I mean Cyangmou… the festival ran until 3am and I had to go to work the next day ^_^’ ). Some of the staff, having seen the game during the day but unable to play at the time due to being at work, approached Cyangmou and asked to have a go! 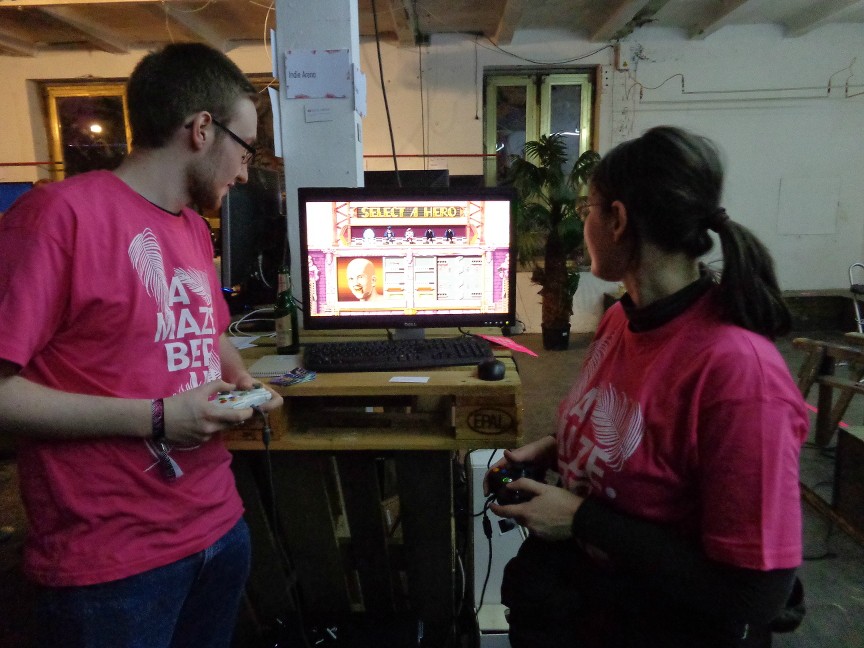 Some of the feedback / insights we gained over the day include:

- You can’t make business without business cards: I will happily concede I was on the fence about this one, and must give full props to Cyangmou for getting some business cards printed at the last minute. We didn’t even have to hand them out most of the time, as we had set up a little pile of cards next to the screen, and people would just walk by, check out the game, and grab a card.

- Bring something to sit on: I read a lot of post-mortems of indies going to game conventions, and this is one recurrent piece of advice I wish I hadn’t ignored… We started showing the game at 4pm, and by the time I went home around 1am my feet were positively *killing me*. Next time I’m definitely bringing some sort of fold-up chair.

- People are there to have fun: probably the biggest mistake I made (I’ll take the blame for this one ^_^’ thankfully it was easy to fix) was to forget that playing at a convention is not the same as playing at home. The game’s inspirations are 90s 16-bit arcade games, and I’ve always been a big fan of “nintendo-hard” since that’s what I grew up with, so obviously the game *will* be hard.

But what can be an enjoying challenge in the comfort of your home can easily turn into an annoyance on a crowded convention floor with little time to explore the game or progress along the learning curve. I’m still giving myself tiny pats on the back for having built in those life-saving cheat codes in time for the show, but next time the game is definitely starting on “infinite ammo / god mode” from the get-go.

- Girls are just as hardcore as guys: let’s not beat around the bush on this one, Tower 57 is basically the game 14-year-old-me wanted to play, and I would be lying if I said the fear of being perceived as a “boys and their toys” kind of game hasn’t crossed my mind many times; it’s a concern that has come up repeatedly in our design discussions with Cyangmou.

Therefore it was no small relief to see girls seemingly enjoying the game just as much as guys. But beyond that relief, it was really fascinating to watch them come up with entirely different strategies than their male counter-parts (especially noticeable when girl-guy teams were playing).

To give you a practical example, despite opening the demo with an illustrated overlay of the controls, most guys seemed to totally ignore the dash ability, preferring instead to methodically mow down everything in their way. Girls on the other hand figured right off the bat how to effectively use the ability by dashing around the rooms wreaking havoc, then dashing back to safety.

- People get lost all the time: this one was a bit surprising to say the least. The demo is still pretty rough, especially in the “visual feedback” department, so we were expecting people to get a bit lost or be a bit confused about certain aspects of the game. But I certainly did not expect it to happen to this degree.

Since we wanted to give players the ability to explore around the levels if they so desire, there are some branching paths in addition to the main path of the level, which usually lead to small dead ends filled with coins, ammo, weapons and what-not… However through a combination of rough work-in-progress level design and lack of visual feedback, a lot of players would get lost at one point or another during the demo. Probably some of the greatest feedback we got, which will result in a lot of changes in the way the level is built.

- “Show, don’t tell” only works if you actually remember to show: this one might seem obvious, but when you’ve been building and playtesting your level for hours on end, it’s easy to lose track of how well something you have grown familiar with is being “shown” to a first-time player. Something as silly as placing the first keycard next to the first locked door rather than in front of it :) So once again we gained invaluable feedback over how well or not our “show’s” were working (spoiler: we’re not quite there yet).

All in all it was an incredibly positive experience, and a great reminder of why all those sleepless nights spent coding and painfully arranging pixels really *are* woth it.

As a final word I just want to thank everybody who stopped by and tried out the game; you are all the reason why people make games, watching you play was mad fun, and your feedback, whether positive or negative, will help us reach our goal of putting out a kick-ass demo, so, you know, thanks for that too :) 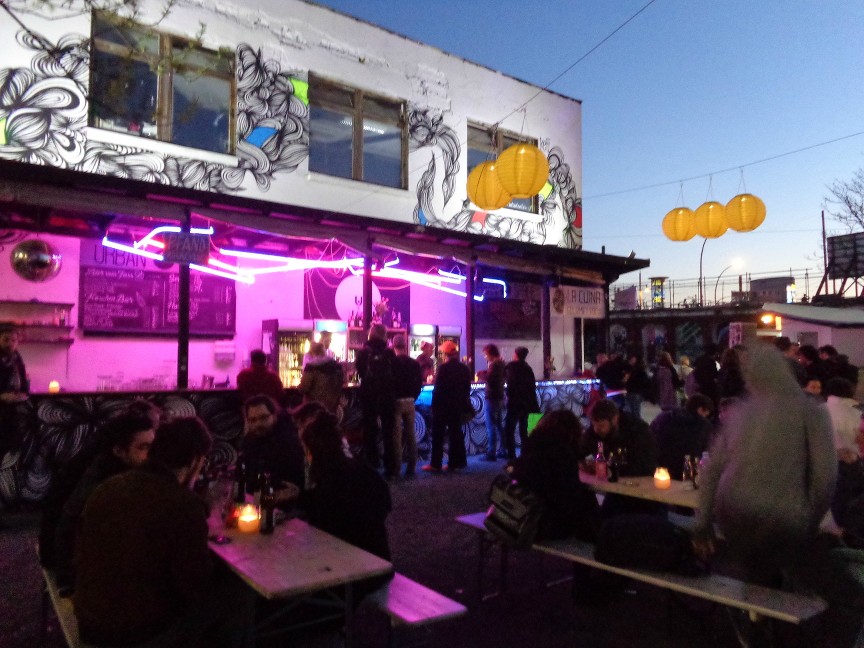 Sounds like a great day with a lot of opportunities to gather valubale feedback. Love reading these reports.

Thanks, we had a lot of fun making it ;)

Thanks for the report. Always nice and helpful to read such a long report. Maybe i will go next time :)

You definitely should, it's a really cool experience!