This weeks update is a big one!
First of all, Shooting while moving has been added!
It's one of the most requested features and you can now try it out. It is a very delicate mechanic so I look forward to hearing you feedback.

Event Triggers!
Now Events have a separate tab for adding Event Triggers. Previously all Events were hardcoded with Proximity and Condition triggers, now you can add the ones you want including all the new triggers like Infected_Died and Item_Proximity.

Gauntlets Variables!
It's very difficult to explain how important this is but it is massively important! There are various types of Variables and most Event Actions can take Variables as an Argument.
If you are a programmer like me you can probably start imagining all the possibilities but for everyone else let's just say the possible uses are endless.

For example it is now possible to make a Gauntlet that works like an arena with RPG elements like leveling up or a shop. You can make it so that every dead Infected drops a certain resource, then using Item_Proximity you can make an Item drop area and increase a variable by that amount. Doing so you can get a "bank" of resources, then you could for example have a button that checks if you have enough resources to spawn a better Weapon or increase the Survivors View Distance. 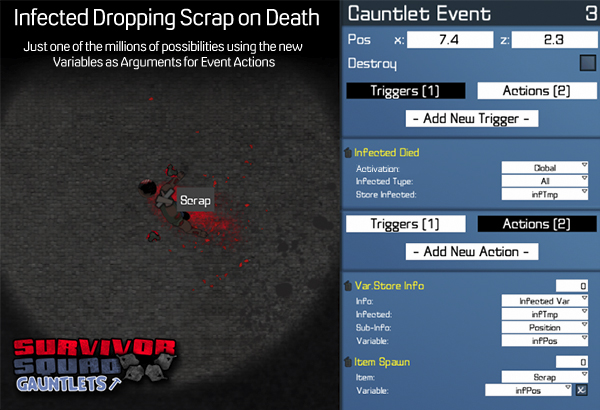 With enough imagination you could now build an entire complex RPG within the game! Stay tuned for some really cool Developer Gauntlets to be added in the coming weeks!

* Changed Event_Action: Var.Store_Info, added ability to store all kinds of Info, like the current Position or Name of a Survivor
* Changed Object: Laser, you can now set to Kill Damage or a fixed Damage Amount, useful if you don't want instant death when touching on Damage Rulesets

* Added Shooting while moving! Survivors will fire slower while moving and have reduced View Distance, Fov. Hold LeftShift while you give the move order
* Added Event Triggers, this replaces the previous mode of setting proximity, inside and condition. Now there are plenty more ways to trigger Events. Event Triggers can also store Info in Variables such as what Item or Survivor triggered it
* Added Score Types, Start at 100k or Start at 0
* Added Position Drag on Infected Patrol
* Due to how the new Variables work, they can no longer be edited after being created
* Fixed Jeep hitbox when using Static Start
* Fixed Achievement amount being displayed incorrectly in the Profile
* Fixed Dropbox going out of camera view
* Fixed Screenshake while using Active Pause