Our 16th update, showcasing the first screenshots of the demo level and how combining weapons can result in even cooler weapons!

This week we’re incredibly proud to be able to show the first screenshots of the demo level. As I briefly explained last week, now that we are fairly happy with the general layout, Cyangmou has started painting over our prototype to create the final polished version.

Please keep in mind that the props (crates, columns, etc.) are not in place yet, so it looks a bit bare, also the overhead layer and the background parallax layer are missing, and of course the lighting is disabled, but hopefully the results speak for themselves as to whether we are on the right track: 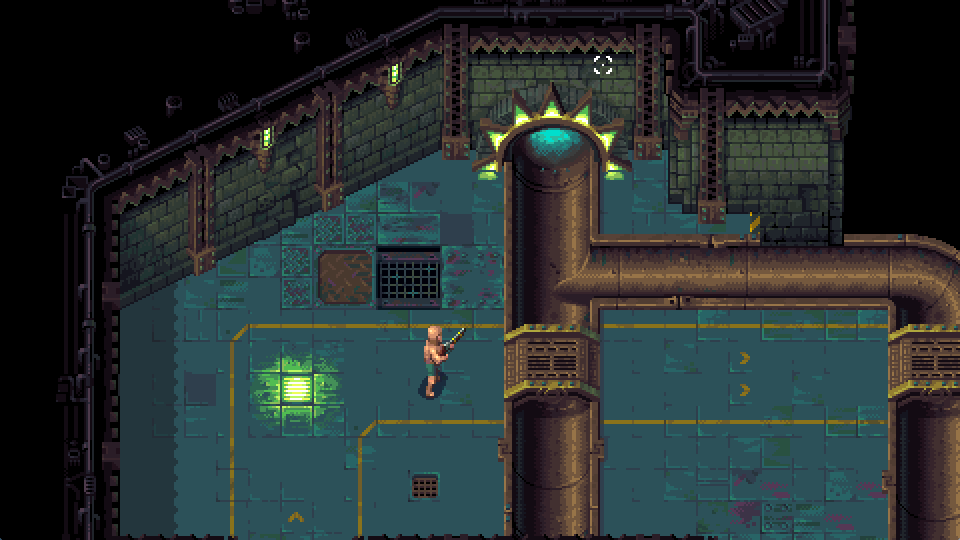 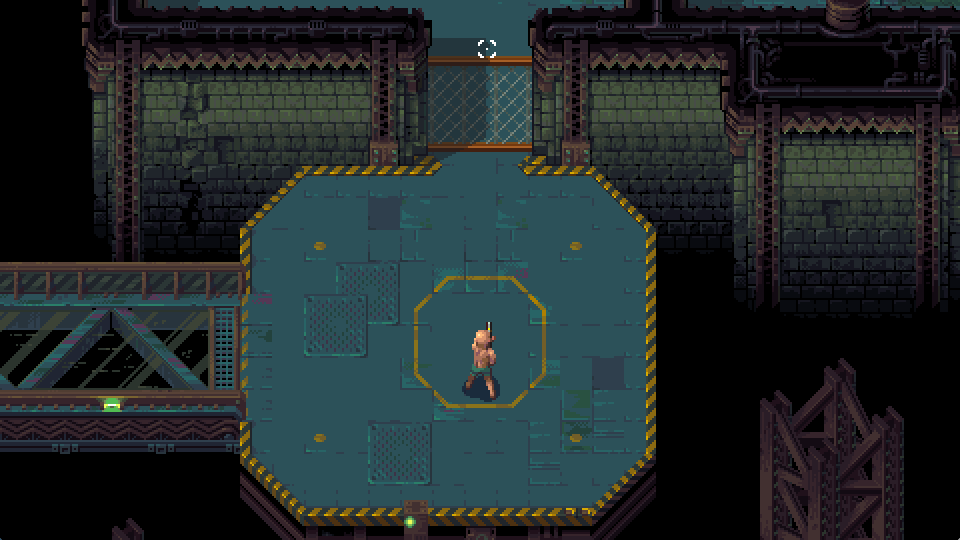 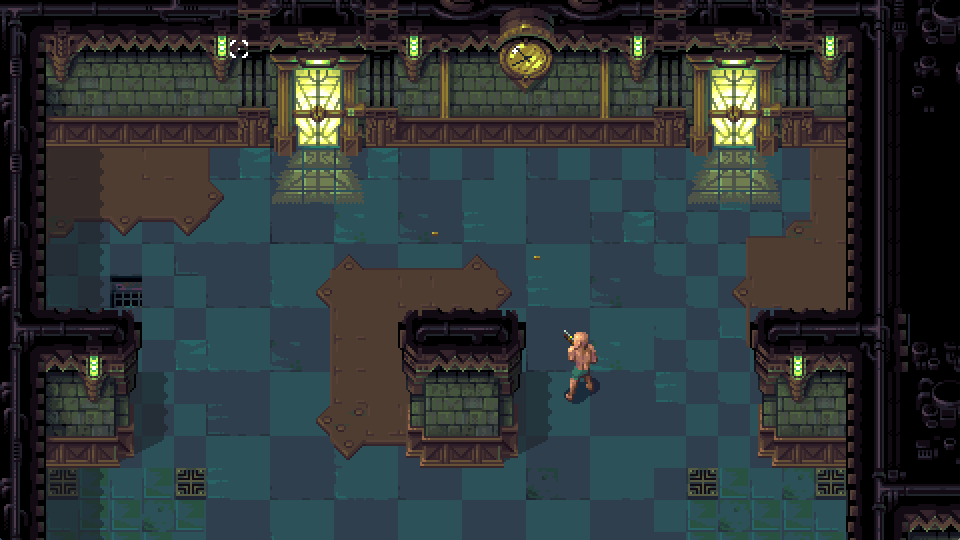 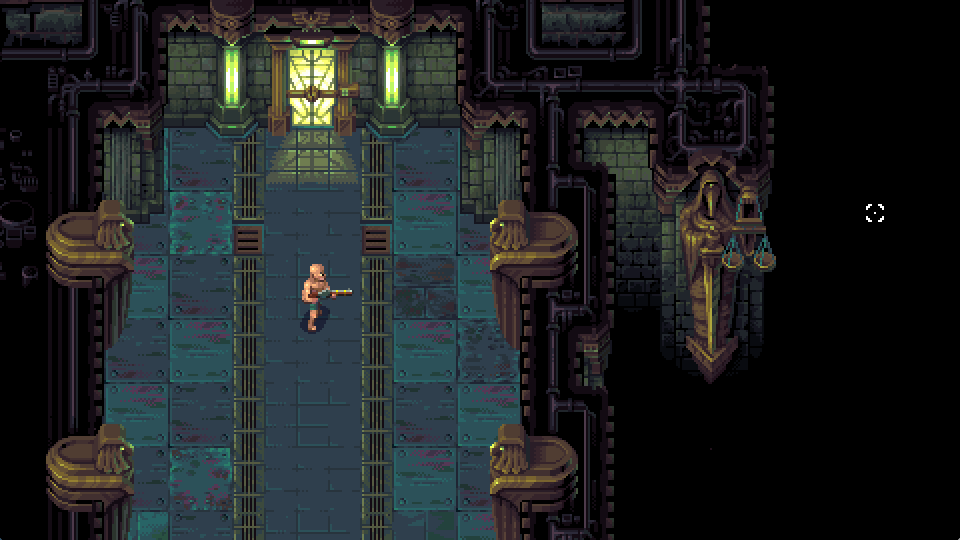 In addition I also wanted to take a few lines to expand a bit on one of our core features, namely the so called “emergent gameplay”. As a quick reminder, the idea is to create a set of simple rules, or systems, which can interact with each other in complex ways, resulting in unforeseen or unscripted situations.

If that sounds confusing, think of the cops in GTA and the countless funny videos on youtube of them doing seemingly ridiculous things. Those situations were obviously not planned or scripted by rockstar, but are the “complex” result of the “simple” rules that govern their behavior.

Taking this idea back into our game, a good example would be the hexapods: their movement is governed by simple rules (such as flocking, chasing, etc.) which interact in complex ways so that their behavior will never be exactly the same in different play-throughs.

The reason I’m bringing this up is because we have tried to apply this philosophy to the weapons themselves. So for example a turret shoots bullets. But if you set that turret on fire, the fire will spread to the bullets it is firing, so you have now created a flaming-bullets-turret.

These simple rules are applied to everything indiscriminately, and since players have two weapon slots, this means you can combine two weapons - essentially by firing both at the same time - to create unexpected results.

Allow me to demonstrate.

The flamethrower is a short range weapon. However if you combine it with your tommy gun, you can effectively extend its range:

This doesn’t apply just to fire though, as electricity also travels from entity to entity, so logically combining your tommy gun with your lightning gun results in something like this:

You can even get creative and combine for example the harpoon gun with the flamethrower to create flaming harpoons that will not only impale enemies but also fry them:

We currently have 9 weapons - not counting the various types of grenades - so that means 36 possible weapon combinations, and we are still considering a couple of additional weapons so that number may still rise.

Hopefully this will produce enough variety in the ways you can beat the levels to entice players to go for additional play-throughs :)

Thank you again for following our progress, I’m looking forward to posting another update next week!

Do the weapons fire at the same time? Or is it the classic duel wielding type of "press left and right mouse" at the same time deal? And also, fire+lighting flamethrower seems overpowered allready :)

it's the classic dual wielding, so left mouse (or trigger if you play with a gamepad) -> primary weapon and right mouse -> secondary weapon. You are free to use either one or both at the same time (gotta think of the ammo though!).

And yeah of course this will need some careful balancing ^_^

Some rouge-like elements would just be the icing on the cake for this... Like procedurely generated maps.

Yeah, initially the idea was for most floors of the tower to be procedurally generated maps.

Cyangmou and myself had a lot of discussions over this point, but ultimately we decided that "human" level design has an added quality to it that procedural generation just can't match.

I feel like I should stress that I'm talking about level design here, not the actual look of the rooms. So things like enemy placement, secret rooms that are a bit more elaborate than a simple hidden switch, being able to playtest a level over and over until every spawn, every ammo crate, every health pack is strategically placed to optimize the game experience; that kind of stuff...

I mean a lot of people heap praise on games like Castlevania, Metroid, Megaman, etc. for their brilliant level design, and that's obviously not something you achieve by procedurally generating semi-random rooms and placing semi-randomized traps and loot based on a finite set of rules you feed your generation algorithm...

So in the end we made our choice :) It sure is a lot of work, but I'm hoping it will pay off in terms of the quality of the experience ^_^

Even though this is a shooter -- I get a very Chrono Trigger feel form the level design. It looks amazing!