I've almost forgotten about this site, so it's time to get those that follow here an update on what's happening. In this diary I'll be going over some news and updates on how we're doing over at SWGD.

Posted by LastLeviathan on Dec 4th, 2016

I've almost forgotten about this site, so it's time to get those that follow here an update on what's happening. In this diary I'll be going over some news and updates on how we're doing over at SWGD.

Iconic Systems
Our goal is for players to experience the Star Wars Universe, and the bulk of that is the systems and planets. While a lot of the systems have little to no information whatsoever, we will leave them RNG to allow for some randomness and save time. That being said, a large amount of effort by Nukumnehtar has been in locating and adding in the iconic systems that have yet to be placed into the mod. Places like Ziost, Zakuul, Taris, Zygerria, etc. are among the over a dozen added and more are coming.

Shipyards
The mod's goal is also immersion, in that vein we've tried to figure out how to make different parts of the galaxy feel unique as they do in Star Wars. Although we had trouble at first, we stumbled upon Nikkle's work and discovered some new things we could do. His tests allowed us to create the base for shipyard planets. Although buildable versions might not be in next update, some known shipyard planets will have the appropriate look and provide bonuses. Models
Although I added in the combat ships last update, they were of poor quality when it came to textures. In addition, the rest of the models were missing, meaning people were stuck with mammalian designs for anything else. I've dedicated a chunk of my time to completing the ship models for the Sith and the Republic, with updated textures, lights and some with engine effects. The Force
For a long time I've been throwing ideas around on how to implement the force and reading people's suggestions. Essentially, the plan is to have it integrating in several ways. This next update will introduce some Force content for testing and seeing how everyone feels about it.

Ethos: I've added two ethos, Dark Side Servants and Light Side Servants. Each of these will provide access to certain technologies unique to each ethos.

Technology: The plan is to have tiers of research. The will be available to ethos and provide special buildings, units and attachments. The general purpose of the tier will allow empires who aren't necessarily dark or light side ethos orientated to gain some force sensitive units and buildings.

Traits: All leaders of every species will have a small chance to gain a force trait. They will range from Tier I to III in power, meaning the leader of an empire or a governor might be a minor or powerful force user that allows him to be more successful at his or her work.

Ethics
I've read some comments and felt the same, that with vanilla content some of the empires simply don't fit together. Whether its the Geonosians or Mandalorians, the limited governments and ethos don't leave much room for uniqueness. Recently I discovered a mod that I personally think is fantastic and adds far more depth into the different ethos and governments within the game. Rather than do what it does myself and essentially duplicate it, I spoke to the author and I'll simply make it a required mod. I've made it compatible and will be updating the factions appropriately, which we feel will flesh out the factions deeper. Expanded territory
Another thing we've been working on is giving expanded territory to some of the established factions, moving closer to the scenario vision I had at the start. Factions with known territories like the Sith, Mandalorians and the Hutts are all getting extra starting planets. This is to put them on par with the Republic factions who at the moment have a distinct advantage from their starting allies.

Colonization
This is another section of the game that we intend to work with. Initially it will begin with adding in some new technologies that allow players to colonize asteroids, molten worlds and frozen worlds. We want to make colonization more like it is in the Star Wars Universe, but aren't sure what limitations to do that might be. As such, we haven't quite established a set plan, so that's all I'll share with you for now.

Species
Species have been in the works, we've started to organise and plan our route to getting them done. We'll be starting with the more humanlike ones that belong to the families of Human, Near-Human and Humanoid first, before moving on to more complex ones. Below is a preview of some of the ones we've completed so far. 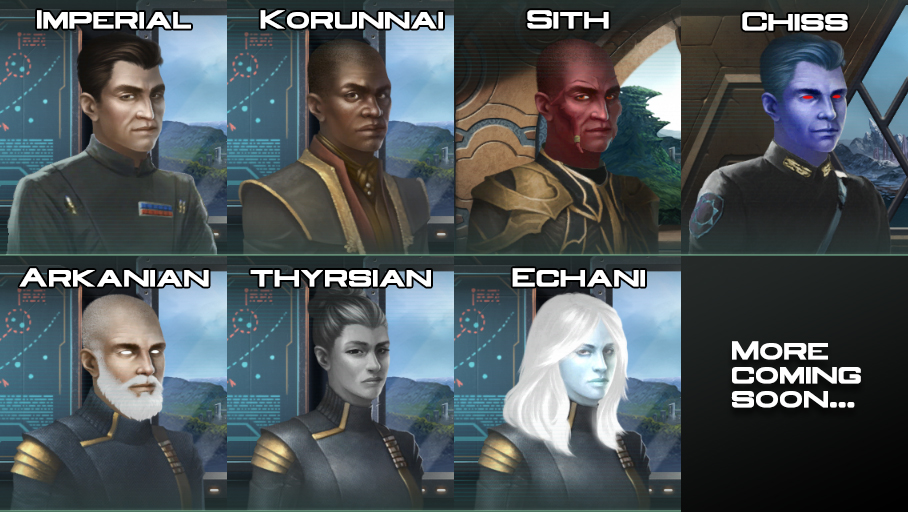 Thanks for reading, and for the patience!

This could be the most badass mod for Stellaris ever! Thank you!

I am looking forward to your next update this mod is shaping up into something grand! The only complaint I currently have is for the Echani appearance the blue skin looks a weird to me and instead I would suggest going for a pale white or chalk color. But since you are the author I will leave the choice to you

I might have chosen the wrong skin to preview, they have mostly chalk white skin with the blueish as a variation.

Ah I see don't worry about it I understand that many things are a WIP and may be changed. Keep up the good work to comrade.

Speaking of which would you need some assistance with some sound effects?