In this first update we'll finally do some introductions and tell you about upcoming game Ancestory.

Update #1 - What is Ancestory?

It's Tatu, the Team Lead, here and after a few weeks of crunching on various things (yummy!) I finally wanted to tell you about our upcoming game and introduce myself properly.

I come from the southern parts of Finland and have moved to Kajaani to make games with a team. As the Team Lead it's my job to ensure the game gets completed and is good. That means I'm constantly on top of the schedule, making sure the team is communicating and working towards common goals and being as fast and effective as possible. It's by no means an easy task as there's no singular approach to being a good leader, but I believe in helping my team reach their goals and improve themselves while letting them have their own way of working. I'm also designing parts of the game, but we share a lot of the conceptual design work as a team as well. The duties of a Team Lead for me also includes handling all main communications and I regularly try to gather feedback and help from the local developers to support the rest of team. 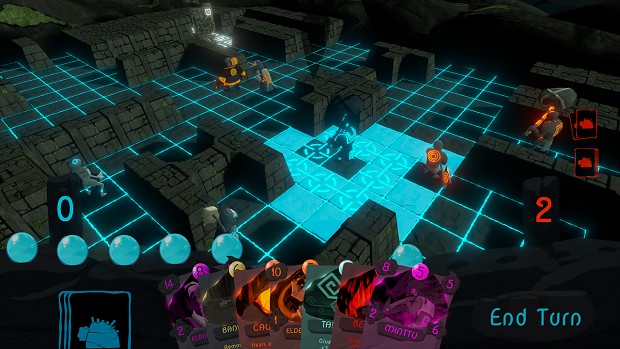 Ancestory is a turn-based card game, featuring grid movement and 3D environments.You control a shaman who can use cards to summon vicious minions and cast mighty spells. The goal is to fight and race the opposing player for control of totems located on the battlefield. These totems are used to capture the massive golems you are fighting atop and victory is achieved by capturing the golem.

We are developing the game for PC with Unreal Engine 4 and targeting Steam for the release. The version we are currently showing was made in just 7 weeks, but it still contains all the major features of the game from online multiplayer to customizable decks. We are now preparing to take it much further and also trying to get as much feedback as possible to ensure we're making the best game we can. 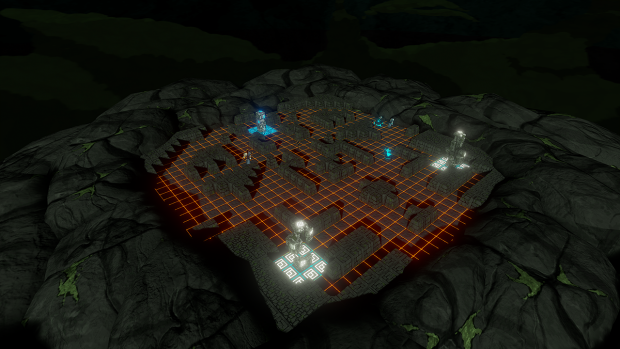 The battlefield is on top of a golem, which we'll be introducing later on, and you will get to move your Shaman and the minions on the grid. The big, glowing pillars are the totems you and the other player are fighting for. By capturing and holding these totems you gain victory points.

Currently the battlefield is still well under development and we want to add a lot more detail to the environment as well as adding a bit more depth to the gameplay elements with some environment interaction. At the moment the tech behind the environment has been working really well and we are really excited about being able to easily generate content and adding the detail should not prove to be an issue.

We'll be sharing our progress on the environments in the future and our experiences prototyping new stuff, but next time we will introduce one of our programmers and we'll be talking about the gameplay features soon.