I will start making articles here showing the progress if any of it is visual and changelogs for next versions. this one is for 0.7 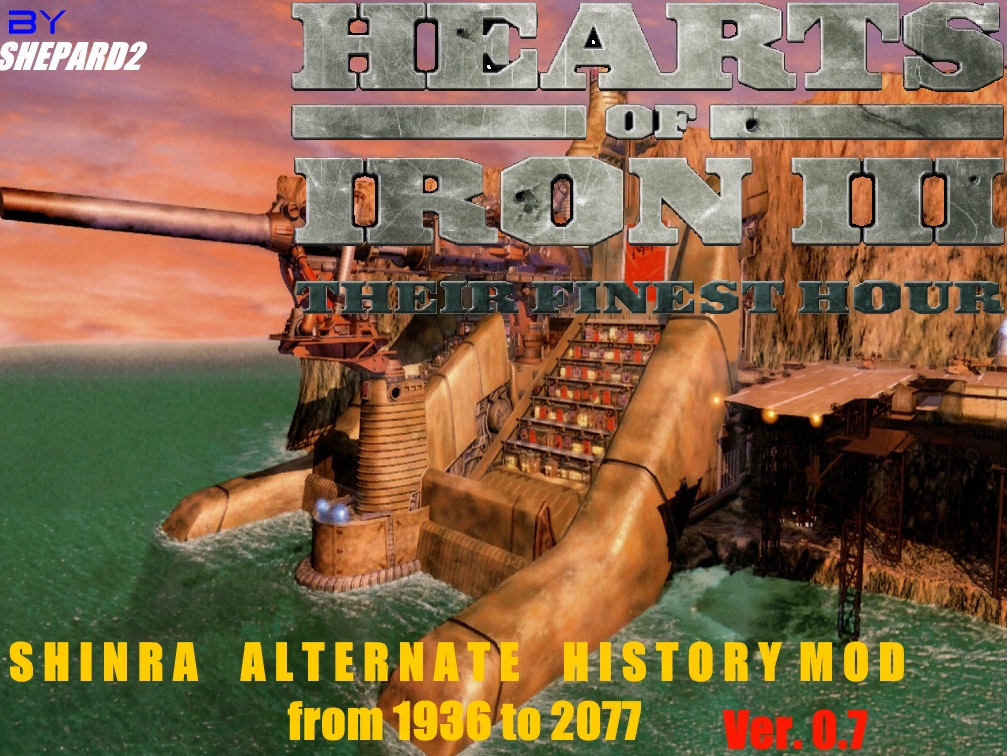 i got little time to work on the mod lately, but i keep on it anyway, due to some errors on some of my new events for The Planet's Revenge event line, i had to remake them all so it took some time, this is the main reason this update has less content.

Here is the changelog planned for 0.7(subject to change for more):

-Added new country = The planet (it's made for AI use not player intended but can be used.
you cant join any faction and will be at war with everyone likely, it does not have IC and gains manpower and units by events. (-DONE-)

-Added Event to activate or not ( to build) SS units as germany. (-DONE-)

-Added New options on sudeten line and maginot line events for holding them (in exchange for manpower and resources to repair) and pics for events. (-DONE-)

-Added Gernica bombing (Spanish Civil War) event for Germany( decide if do it or not with consecuences for both). (-DONE-)

-New event for Shinra and germany to share mako techs & resources if Shinra joins axis and other conditions are meet). This new event grants Germany access to some of shinra techs. (-DONE-)

-Added event to create The Turks Division(Department of Administrative Research) in Shinra, which gives a spy efficiency boost for shinra in exchange for money production and manpower.(-DONE-)

-Added a new line of events called "The Planet's Revenge" that will trigger natural disasters and
a full scale invasion of monsters around the planet if Shinra extends its mako usage too far(build reactors events:currenly 5 events)50 % of happen. (-DONE-)

-Added Events to activate special units (if requirements are meet) for : FRA,ENG,SOV,USA,JAP. (-DONE-)

-Added new Unit for all *Chemical Trooper* (obtained by event and tech). (-DONE-)

-New 7 units added for the planet like the "Weapons" giant monsters with OP(KILLABE) stats created by the planet to exterminate humanity and some minor monsters . (*Under Revision for 0.8*)

-Conquered countries by The planet will be reduced to ashes with no IC and no manpower generation also they will never be liberated so be carefull. (*Under Revision for 0.8*)

-Added New music from Cancelled game EastVsWest and other sources.(-DONE-)

-Fixed some events like the japan surrender Advise triggering even if japan did not. (-DONE-)

-Removed Mussolini in Italy if axis are defeated. (-DONE-)

-All Axis Countries become Democracies or Constitutional Monarchies when Axis are defeated. (-DONE-)

Also, you got an idea for an event? (any event real or alternative will do) post it here or PM me, also you can do it on Mod page on Paradox Forums too.

you can post ideas, or even code for new events if you known how to do them and i will implement them on mod and add you to credits. (If you want to post Code please do it on paradox forums).