Welcome back! Guys, we got some new, crazy, drool inducing stuff coming your way. The team is growing, we got our new forums (which you can find here!), and we are excited to give you a first look at what is to come. For this update, our focus in on the Empire. So, let's get started shall we?

These are all confirmed and are being worked on...listings encased in [] are for both factions:

Buildings and Infantry -by Nomad
The Basics, this is not everything.

In addition: Aznable is working on a Stormtrooper model worthy for the Emperor's commands. 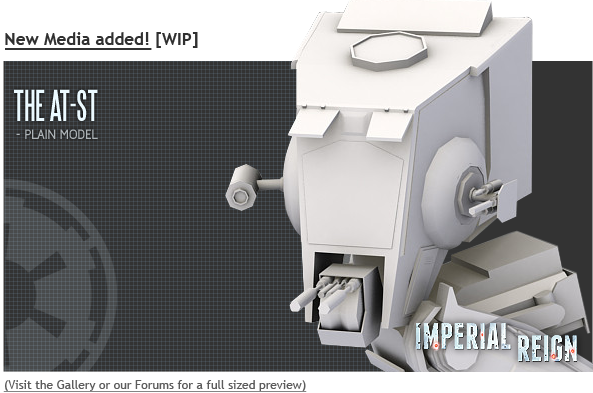 Be sure to check the media section!!!! All renderings are individual. Later renderings will start to conform to some such a standard as above.

Zephon, a new member of the team, is now going to be stepping up for graphic design. He will be fielding the menu and in-game UI. I will still finish the other UI that I introduced to you guys a while back, don't worry. Fans will be able to, upon installation, choose which graphic interface they would like to gaze upon. Zephon's in-game interface will remain default though, and if we have other interested designers willing to add their flair and diversity to the mod then they are welcome.

With this news, we also have a call-out to any coders out there especially fluent in lua for a UI job. Anyone who would like to take up the position would coordinate with Zephon directly so the UI may be correctly implemented.

****Important Note: There seems to be some confusion on the UI. All campaign and map content is atm, placeholder. This mod is very early in development, make no mistake. 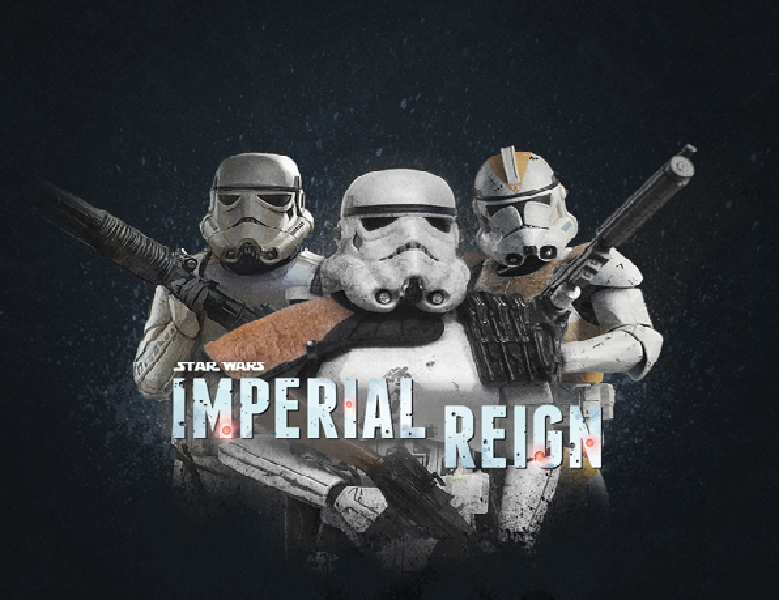 Thanks for following us, we appreciate all the support. More to come in the future!!!

Note! Positions with a * are open.

New types of positions will appear as mod develops

Are you considering to take out the infantries laying down, because in the movies, the soldier never lay down for cover? =)

Oh, but the Rebels do on Endor :D.

Can't give those Rebel scum the advantage right?

Of course you can give them an advantage. :P They're the REBELS! Rebels never die...

wow awesome guys, cant wait to see this when its done

Nice Work!Keep it up Soldiers this is a Order ;)

i wonder if the empire's weakness will be ewoks :0

Hey, I am currently a writer for the source mod 'The Fourth Reich'. I am a Tear 11 Tertiary English writer, and all through out my schooling I have been in Extension English Classes.

I would like to offer my services as a writer :D

I could also be a moderator for your website.

Message me if I can help out :)

Why are you not making this on the DoW engine instead? It has all the damn walker units and melee attacks in it already. and the maps are from space.

Because, for a lot of people DoW is a downgrade from CoH. Whether you talk about the first or the second, the modifications to the engine simply doesn't have the same feel.

Also, if you are talking about DoW2, there are hardly any tools and documentation on it, making it 10x harder to do what we do.

Then again, some of us may not want to buy a whole other game just to do this.

This mod has really caught my attention the images are shiny and look amazing! i really do love the menu screen with jango fett all shiny and awsome like! keep up the good work ill be watching give us something that will rock our socks off guys :d good luck!

i am very excited for this mod, i got galactic battle grounds which was good but wanted a new rts, abd empire at war was good, but it wasn't quite what i wanted, this will bring what i've been wanting.
Thankyou :D

P.S. is that a clone trooper with the 2 stormtroopers on your logo?

Were counting on that :D, the main motivation for this project came from the void that those games left and that which Lucasarts has continually dismissed in pursuit of their new audience.

In regards to the logo: Indeed it is :). Expect units from the transitional period to the Galactic Empire. Such infantry like the Airborne Commandos all the way up to the terrorizing Dark Troopers are in discussion atm.

This mod would be a dream come true to me, i can only pray this mod is completed. i wanted something more tactical than EaW and this promises to be that and dark and gritty with warfare

The timeline includes the period where there were still Clonetroopers in use in the Outer Rim, so yes.

ZERIDIAN I have watch the STAR WARS mod for opposing fronts (I am new so I am not such a specilist mail me at starlen33@yahoo.com) The mod is cool but i want to tell you that most people are interested in infantry soo watch the out with the infantry because its very important so i am begging you to dont screw it up (i am a star wars fan too)

i'm more into vehicles as with most the guys i play this game online with.