I discuss the improvements coming to Claustrophobia in Alpha 1.1.3, and the upcoming features to expect over the next few patches, including dungeon design and health regeneration.

Hello all! If you follow me on twitter, you'll have seen that I am away at the moment, and have been working on Claustrophobia from my laptop while travelling. This particular laptop has had issues in the past with compiling XNA projects, causing fonts to appear blurred and unreadable, but it seems to have put that behind it now. Laptop and internet connection permitted, I will be releasing Alpha 1.1.3 within the next few days. This patch, which I discuss in more detail further down, is mainly to fix the majority of outstanding bugs, and add a number of improvements to UI functionality and appearance. New Content and features will follow in 1.1.4, which I want to discuss here first, since they are still concepts at this point. So, onward!

So far, Claustrophobia's Alpha has consisted of infinite floors of the original Castle design, which has had a number of face-lifts over time. The original plan was to have a collection of different floor styles which each had a number of different monster types that inhabited each, and then when a new floor was generated, a floor type for it would be randomly selected from the list. The problem with this system, as I have found while trying to work on it over the past few months, is that this sort of system is incredibly hard to balance, since the floors could appear in any order, and could potentially mean that in a couple of different games, you could have experienced majority of the different zones.

The other major problem with this design is that there is no progression for the player, no goal to strive toward, and no "completion". I am aware that for some of you, an endless dungeon is more fun than that with a finish, and I will continue to work on trying to balance a different endless mode, but for now, the alpha will be switching from an endless dungeon to the design shown below: 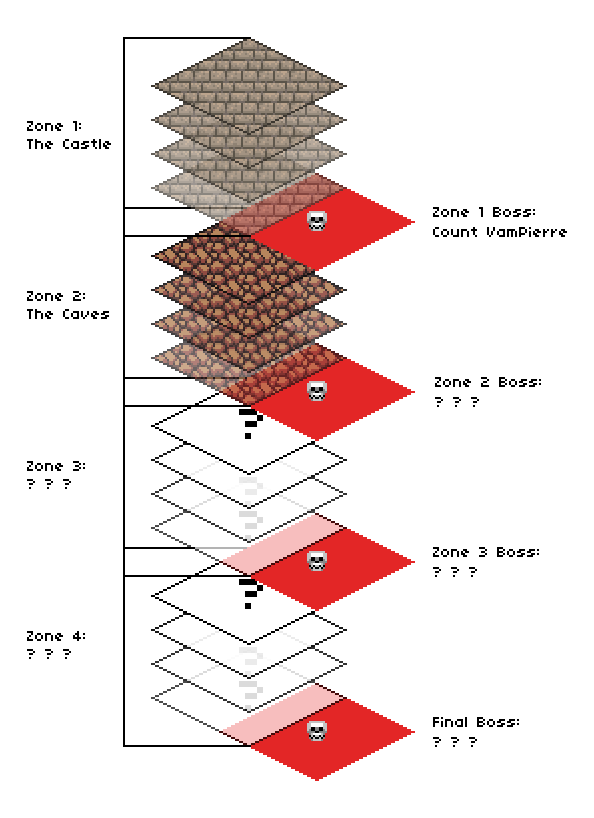 Each zone will consist of four floors of a certain design, with unique terrain generation, enemies, special rooms, and music. Boss rooms will also be removed, with the boss instead being located on the fifth floor of a zone, in a specially designed arena which will reflect the bosses mechanics. If the boss is beaten, you will then travel down to the next zone. I won't be revealing Zones 3 or 4, nor the other three bosses yet, but I will be able to release each zone in future patches.

In 1.1.4 I will be introducing a hunger system, and food will no longer heal you, instead reducing hunger when eaten. Because of this, there will be a lot more food varieties introduced, as well as, possibly, cooking, and the ability to collect food from fallen foes. Starving in Claustrophobia will not kill you, but will instead reduce the amount you can passively heal. Your hunger is used up as you passively heal, and the better fed you are, the more you regenerate. If you are starving, you will not regenerate at all. There is a little more to the new health regeneration system than that, but it is not ready for 1.1.3, so I will discuss the other changes before 1.1.4.

Anyway, enough of design discussion. Now lets discuss the changes in 1.1.3. As I said at the start of this post, other than a large number of bug fixes, the main changes are in UI functionality.

First off, I have rewritten tooltips, so that the text wraps much smoother, and also properly scales so that there is always a consistent maximum window size. This is much more apparent in use than in writing. There are also a number of other improvements, such as a coloured border which reflects item rarity, and a quantity counter for item stacks on the floor.

Inventory sorting has been improved, so that stackable items will now be grouped together properly, and a Sort button has been added to the inventory panel, for those without a middle mouse button.

I have also improved a number of graphics, such as UI buttons, and some of the older tiles and sprites.
For those of you who have yet to play Claustrophobia, I have also updated the screenshot collection, and any old information. 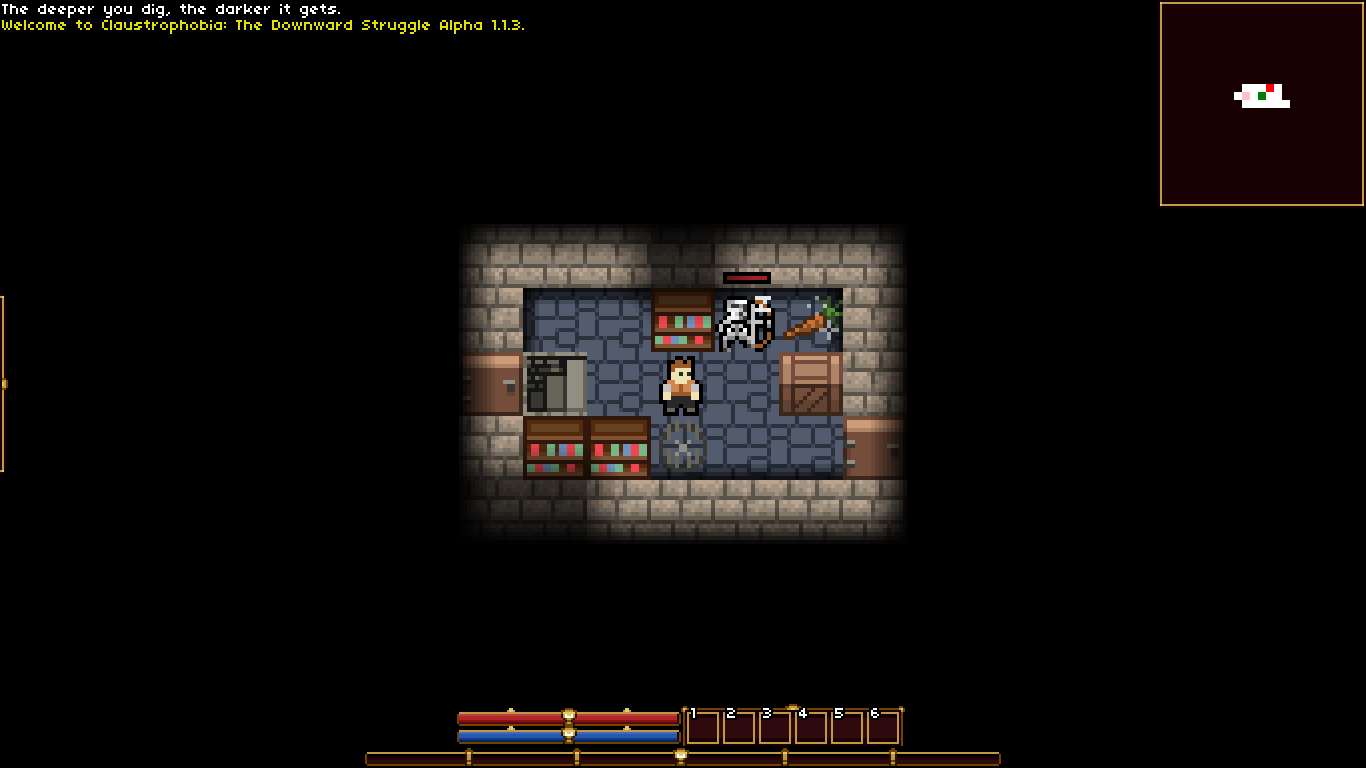 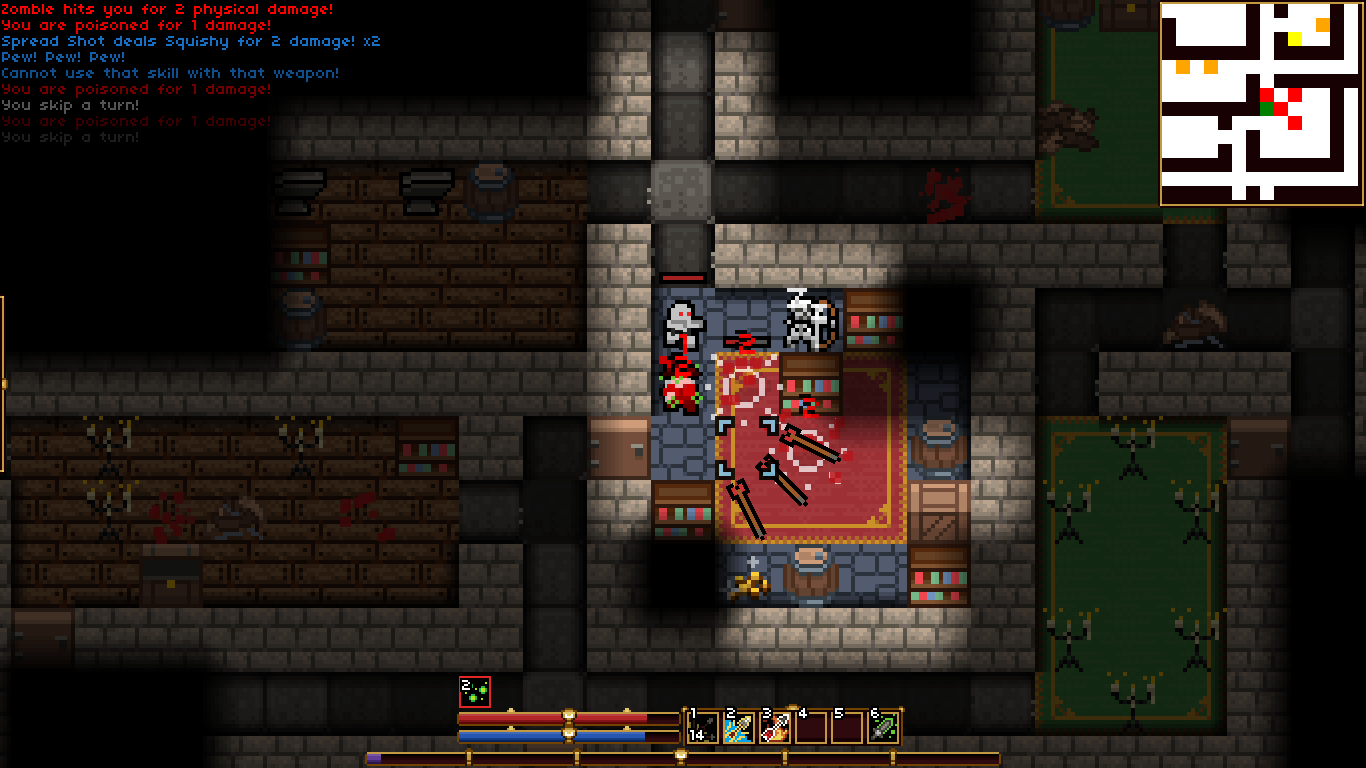 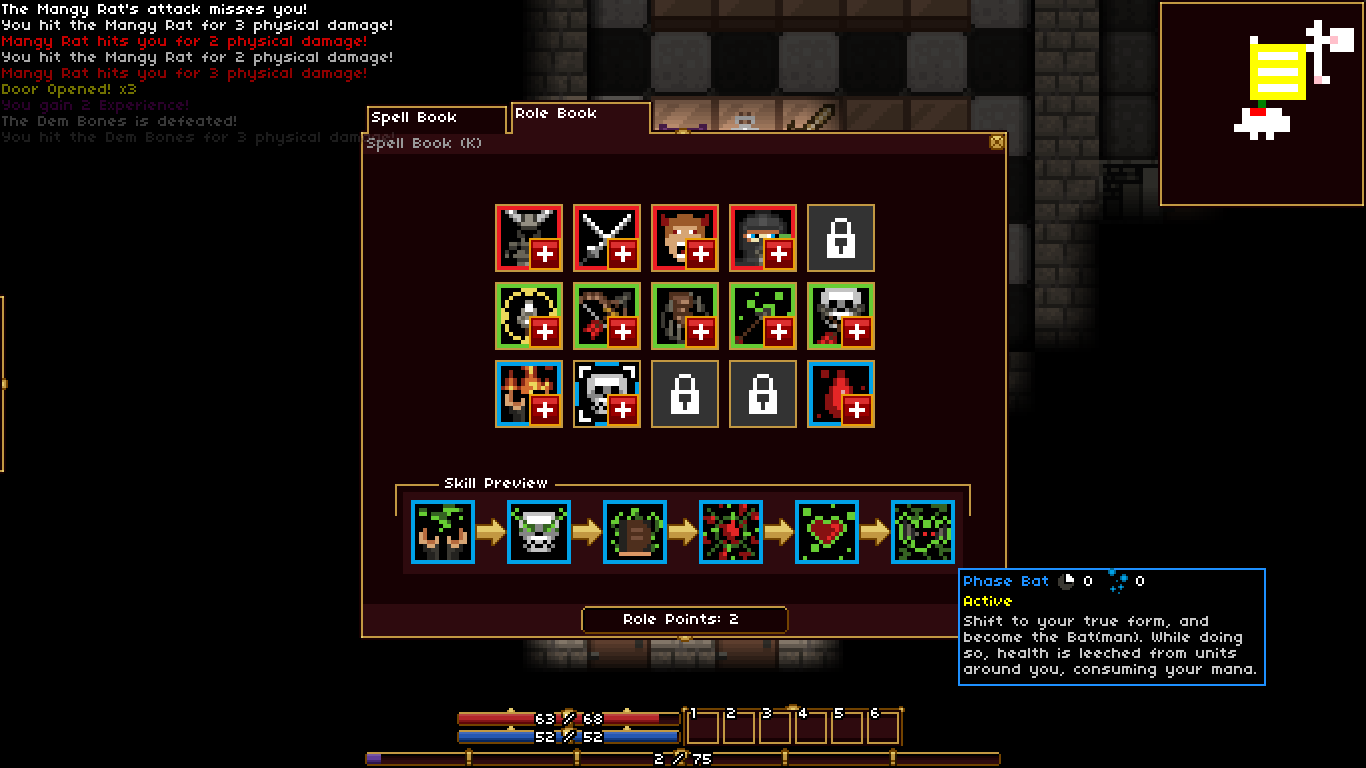 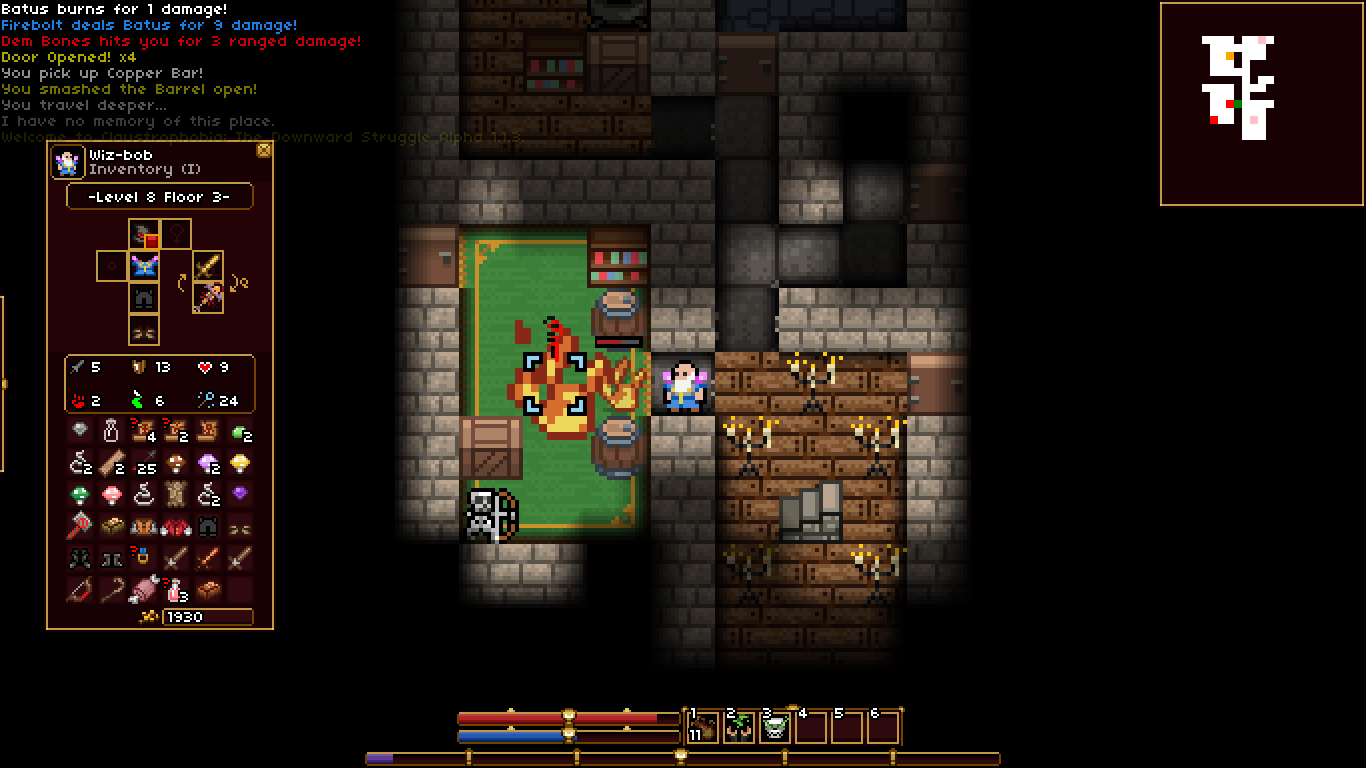 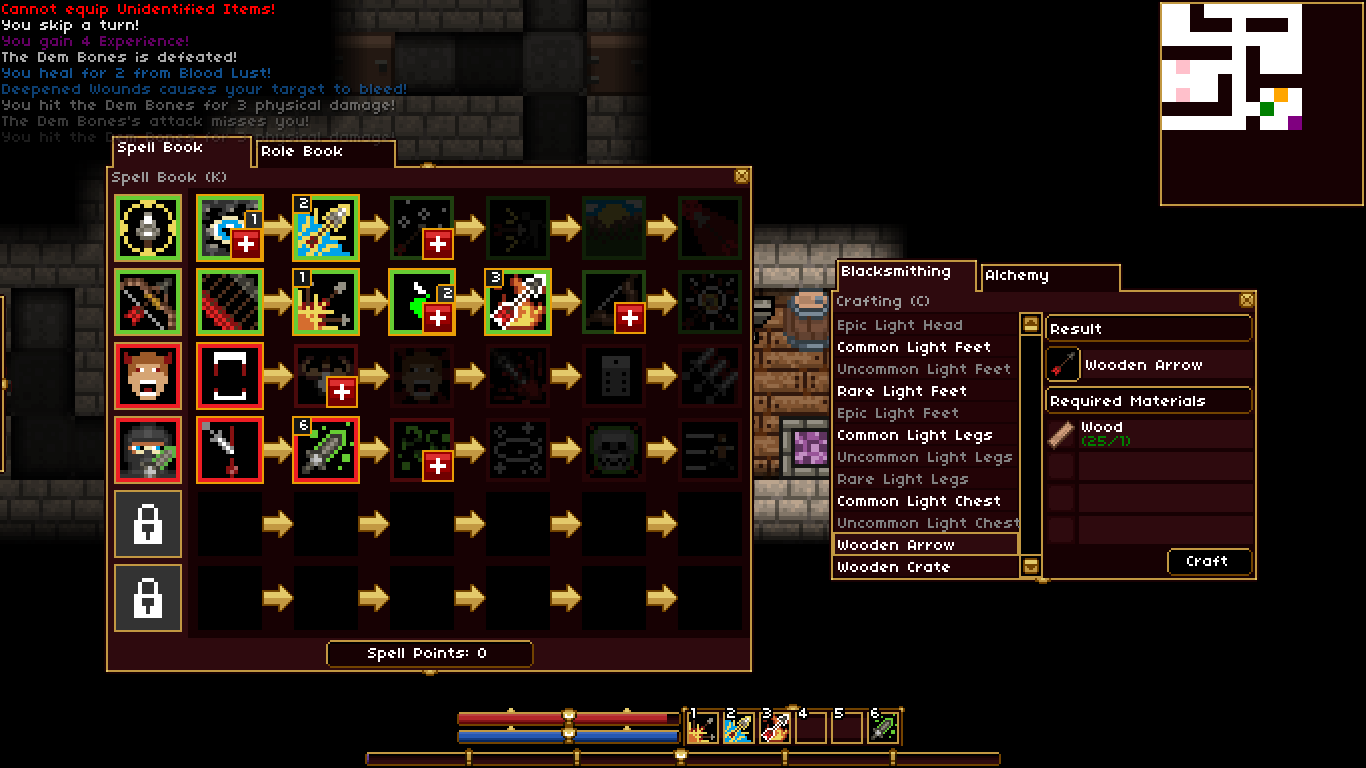 why not have it so completing all 4 zones (beating the game) unlocks a higher difficulty? a game+ if you will.
i would WAY rather be able to fully develop and flesh out my character as much as i want than be told "you win, game over" when there are still 12 more points i want to put in various skills.

My current plan is pretty much exactly that. That, on defeating the final boss, you will be able to chose between two doors. One will lead to game over and "Victory", the other will place your character back in the first zone, but with a whole new layout, and the difficulty increased. Kind of like new game+, except you keep you character progress.