Screenshots of The Violent Ones, and a little about the project.

I am today happy to unveil a new experimental single-player mod for Half-Life 2: The Violent Ones.

The Violent Ones is a very short interactive experience. I'm tentative about calling it "a game," as I don't want to mislead people. There are certainly game-like elements, including a couple of rather traditional sections, but meeting challenge criteria or even "having fun" aren't particular goals.

Inspired by the recent trend of experimental games by a number of independent developers, The Violent Ones allows players to explore an ambiguous narrative during its short length. I don't expect it to take much more than five or ten minutes to see through from start to finish. This small scale allows for a tight, focused development, and an experience in which it is absolutely crucial to explore the whole piece in a single sitting.

Accompanying the fiction is a striking art style, where all items and characters are rendered in pure, block colour. For the majority of the piece, only black and white are used. This serves a particular expressional purpose in itself - but that's something for players to engage with when the time comes.

It's obviously not for everyone. But hopefully it's for someone. I don't expect The Violent Ones to take too long to finish - a matter of weeks if everything goes to plan - and I'll keep you updated on progress. In the meantime, here are three in-game screenshots. 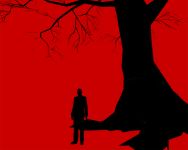 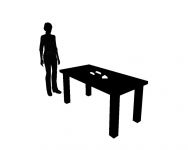 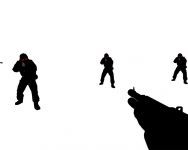 Has a really interesting style.

I was just going to say that the texturing should be easy. :) Interesting project.

Hope it has some horror elements over it, like that indie game "The Path"

There's no "horror" to it, certainly not in a traditional sense. But then, there isn't really any of that in The Path either. If there's one thing I *would* like to replicate from The Path, it's the ability to engage the player on an emotional level, and allow people to draw their own opinions on the story and its messages.

Then I hope you have a good script or writer :)

Looking good, I have to wonder how you would do that in source.

wow, loving the art style - would love for you to show how you've done the flat colors effect.

It's extraordinarily simple. All textures are simply set to self-illuminate. No lighting entities are used. This gives the silhouette look to all items.

Seems interesting :D
Look forward to hearing more from this in the future.

yeah looks cool. let me know if i can help

Hmmm... looking cool so far but i got some suggestions:

1. make it all one color but:
2. give the player something to produce splat decals on the walls/floor/Objects to shape out the enviroment and find his way through
3. remove the weapons
4. if there will be enemies, the player should be forced to run & hide or lead the enemy into a trap
5. The enemies itself should be the same color as the background, just throwing paint on them will show you the threat, so you need to listen well to find out where they are.
6. maybe having the eyes visible at a close distance (Proxies combined with PlayerProximity with an impact on the $alpha of the eyes texture).
6. ofc. the enemies have to be slow and unarmed just harming you at close range.

To me, this highlights a weakness in the options available for classification at ModDB.

The 'Action Adventure' tag is a misnomer. It really isn't that at all. Though there are sections where the player is given a gun, they're only momentary, and there's no threat of death. These sections are treated as separate from the main game, as well. It's difficult to say more without giving it away.

It's difficult to address any of those suggestions without spoiling it, really. All I'll say is: I wouldn't worry about any of that, since it's totally a non-action game. If you can call it a "game". I'm not dismissing your opinions at all, but when you come to play it, I hope you'll see why I don't see any of those issues as important (or, in some cases, see it as important *not* to go down your recommended path).

The style is very Sin City-ish.

I'll check it out when you release it.
I like short mods since I have so much stuff to play now a days ;)

WOW that practically doesn't use textures!!!

The Violent Ones Half-Life 2
Related Games