Lately, we focused a lot on improving the game servers. As we really are starting to code the gameplay part, we released a small video of the game engine in its current state.

We are currently working hard on the servers to let some friends test the game starting September, so we can not show you much.
Nevertheless, we did a small video showing what the game 3D engine can do in its current state.
The video features walking on a generated planet, removing and adding cubes, light and day and night demonstration, and of course ground to space transition.

The first two minutes of the video may look a lot like Minecraft, for two reasons:


We also have an early spaceship building implementation. Please be kind to the 3D dev who made the screenshots, he clearly is not good at designing spaceships, and had only one cube type to do this ;)
Next time we will let the artist do them! 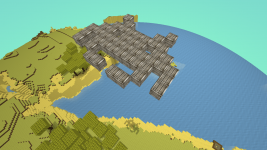 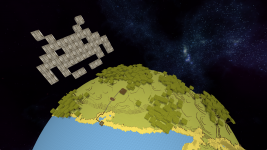 Currently, we have absolutely no gameplay mechanics for spaceships: no engine needed, no weapons, and free design. So yes, we built a space invader! But sooner or later, spaceships designs will be subject to physical constraints if you want them to fly, and space invaders might become a bit more complex to build.

We now are working on implementing the first two gameplay mechanics we want to release: gun fighting and spaceships.

We really hope that we can show it to you soon, with the earth like biome texture pack !