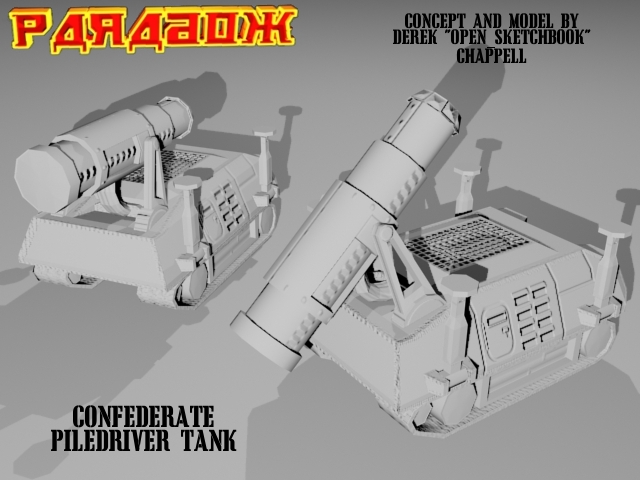 While the Confederate forces are somewhat underfunded (being rebels and all), their arsenal is not limited to extreme patriots and stolen tanks. Their scientists and engineers (no, not the units) are constantly at work designing anything that will give the Rebs a leg up over the competition... and their signature Resonance technology is probably one of the biggest (highest?) legs of all.

The Piledriver Tank, bestowed with a mighty mining jackhammer, is capable of using the fruits of Resonance research to create powerful earthquakes. After setting up (putting down supports, lowering the Jackhammer piece), the weapon begins a rhythmic slamming into the ground designed to mess with the earth below the target, ruining building supports and destroying vehicle suspension. Infantry are entirely unharmed by the seismic activity, however, and it has been reported that some Soviet Conscripts quite enjoy the bouncing feeling provided.

The Piledriver Tank is also capable of occasionally using more force than normal in a strike against the ground, which shakes buildings to their core and is even strong enough to stun infantry in the target zone.

(And no, that thing on it is not a cannon. That is the piledriver. There was confusion about it earlier.)

Sorry about the break between spotlights, folks! They should come more regularly now.