We really want to be as open as possible with our community, and felt that this should extend to our Greenlight progress. We have details and stats in the article.

We are currently in the process of trying to get UNION Spaceship Command through the Greenlight process. Getting on Steam is the primary goal, but this is also a great opportunity for us to spread awareness of the game.

It's really important for us to have a strong community, and we feel it is important for us to include that community in the project. To that end we are going to share the progress and stats from the Greenlight page. We would also love to hear any feedback and suggestions on how we can do better.

I will be updating this post each day with the latest stats from Greenlight. 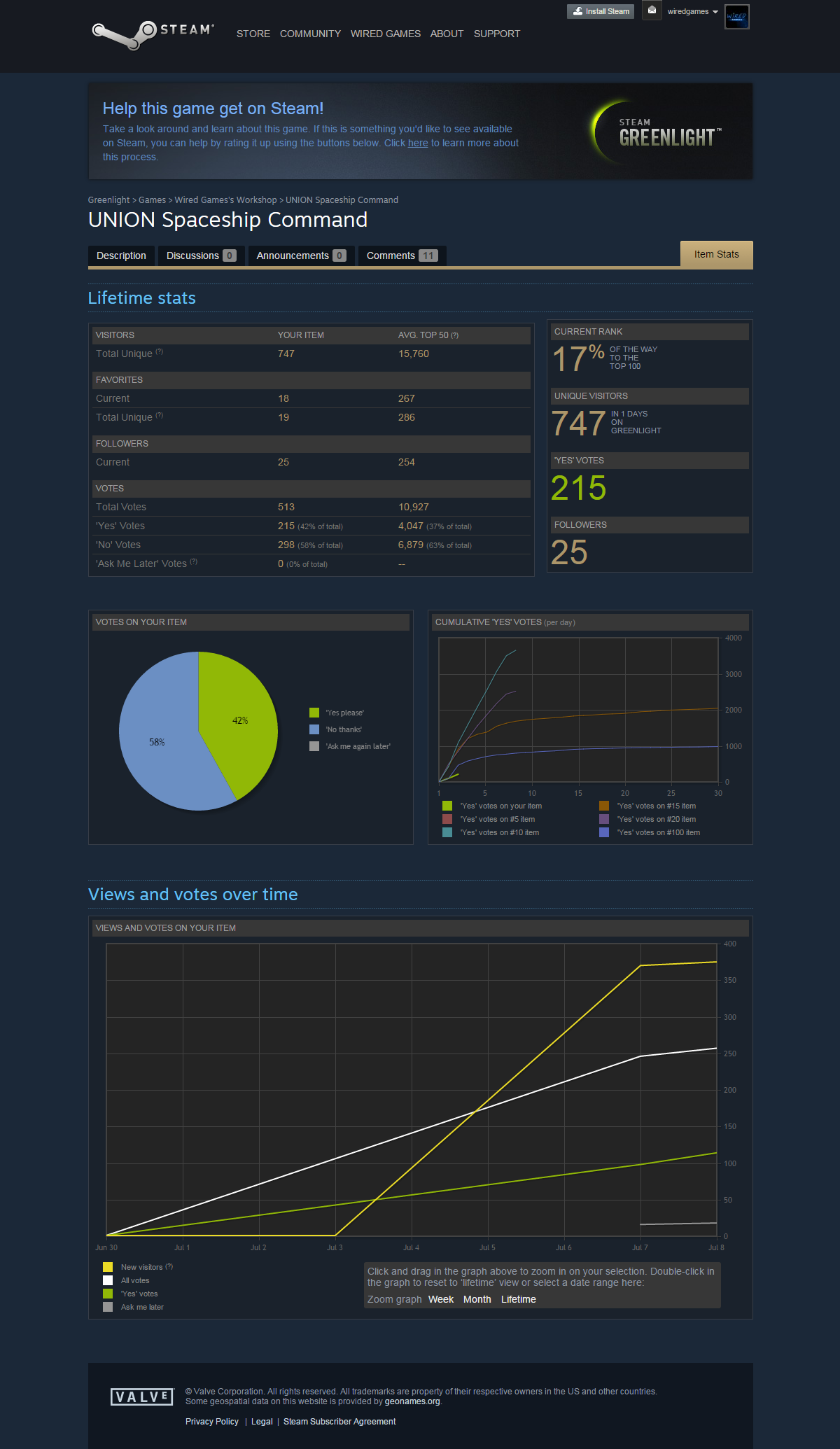 End of day 1 stats, click the image to view in full size.

I had spent weeks getting the game, and marketing assets (pictures and text), and this IndieDB page up to a level I was happy with. The last thing I did was the video, and I had so many issues with video editing software and encoding (crashes, glitches in the resulting video etc.) that in the end I published the page without being totally happy with it.
I felt the need to get a break so I went out for an hour to get some air. When I came back and checked my stats (woo, stats!) I got a real shock. There were around 30 votes but only 3 of were yes, the rest were no. A lot of things ran through my head, mainly had I just wasted a huge amount of time on a game which nobody wanted.
Thankfully, by the time the next hour finished the game was up to about 20% yes.
That got me hooked I have to say, I have become obsessed with getting yes votes. I started looking at how I could improve the yes ratio. The first area I tackled was the description, which up to this point was all text with basic BBCode styling. I replaced the headers (Player Roles, Features etc.) with images and added image headers with icons for each of the player roles. I felt this really lifted the page, and although it's anecdotal I feel it helped with getting yes votes, and comments seemed more positive.
By the end of the first day, as shown in the stats pic above, I was at a healthy 43% (I felt this was good as Steam was reporting that the average yes vote in the top 50 games was 37%) and 17% of the way to the top 100 (I'm not sure how this is gauged, but the progression feels good). 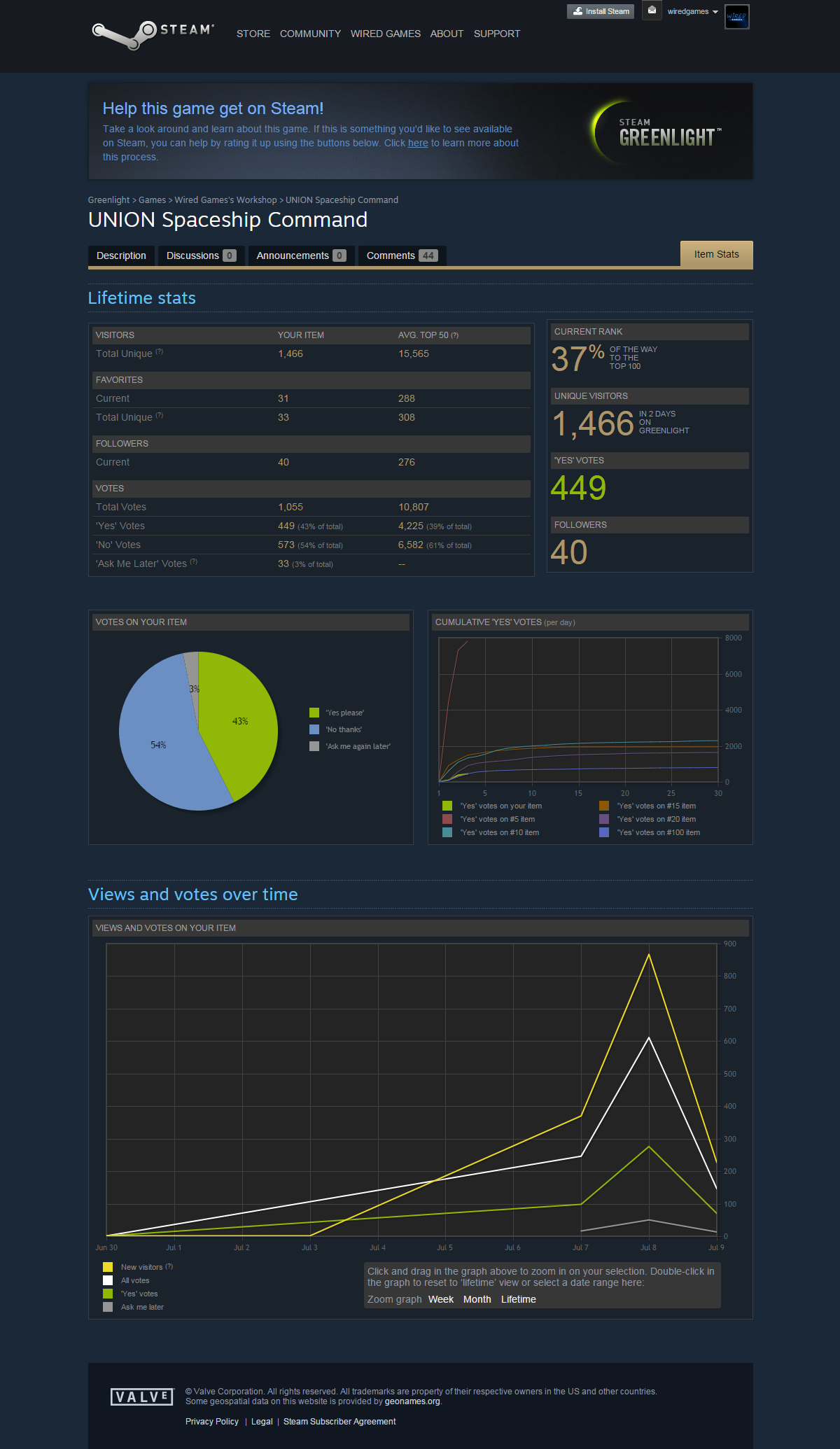 End of day 2 stats, click the image to view in full size.

Whereas my focus on the previous day had been on the page itself, this day it turned to spreading awareness of the Greenlight page to gain more votes. So I wrote an IndieDB post, an /r/spacesimgames post and posted to Twitter and Facebook. That is about the extent of my network, so after that I spent time pruning the page and began answering almost every comment I got (I ignored one, which was simply "so-so game" in Russian, there was just nothing constructive there). A lot of them were really engaged questions and suggestions, so it was actually fun responding to them.
I think I saw a bit of a boost mid-day from my Twitter and Facebook friends, but really it stays stable at 42/43% as the number of votes grew. I think if I can maintain that I'll be really happy. I am concerned though on how I will keep momentum going, it is a bit daunting.

Overall it's been a great experience so far, and I will certainly be trying more things to improve the number of yes votes. I have also been considering setting up an automated script to create and upload screenshots of the UNION Greenlight stats page every 30 mins, and then share that with the community here.

We would love to hear and suggestions or feedback you may have.