Development of UNION Cooperative Spaceship Simulator has resumed. In this post I discuss my reasons for stopping, reasons for resuming, and show some pics and info on new Kite class ship.

Why I stopped, and why I am starting again

UNION has always been a labour of love for me, I believe in it passionately. I have what I feel is a unique, interesting, and most importantly fun vision for the game. And, just as important, I have the skills to make that vision a reality.

Last year I decided to put the project on hold. Work was very demanding with a new product to design and develop, my youngest son was very young, and my choice of engine (Unity) was really causing me a lot of issues and slowing things down. Unity uses an ancient version of Mono, which has a lot of performance issues (mainly relating garbage collection) which I spent a lot of time working around. On top of that the architecture I had developed for the game was heavily based on object oriented techniques and the more the game grew the harder it became to change things. I couldn't dedicate the time I wanted to sorting these issues out and I became completely frustrated. That was when I made the decision to put the game on hold.

Since that time UNION has never been far from my mind. I continued to work on my development skills, as I always have, working on prototypes and trying out new technologies. I always wanted to continue UNION's development, but I really felt that I shouldn't do that if I didn't have the time and head space to dedicate to it.

About six weeks ago, I started to build my own game engine using open source libraries (primarily Ogre for rendering). I took all that I had learnt from UNION, including my mistakes, and put it into the engine. It uses an entity component system which is distributed (networked) and heavily data driven, making it very flexible and development quite fast. Performance and stability are extremely important to me, I load tested the engine with 2 million objects loaded on the server map, streamed to multiple clients and rendered (clients were seeing up to 2,560 objects at any one time), all with 60+ FPS and no glitching.

I started implementing features from UNION in the engine, including networked physics and the GUI systems. After a few weeks I felt that it was time to officially continue development. I don't do this lightly as I don't want to let anyone down (including myself). 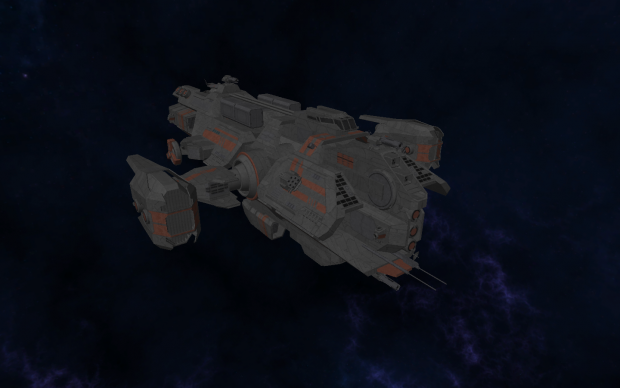 I feel like the first ship is one of the most important in the game. Not only do I need a ship to develop with, but it really is a statement of intent. For that reason I approached someone whom I really respected, SolCommand, to design the Kite class frigate for me. We discussed the requirements for the ship, but really it all centred on one: form had to follow function and every major system had to be represented physically on the ship. That's not to say that we won't have ships with sleek designs in the future, there will be variety. 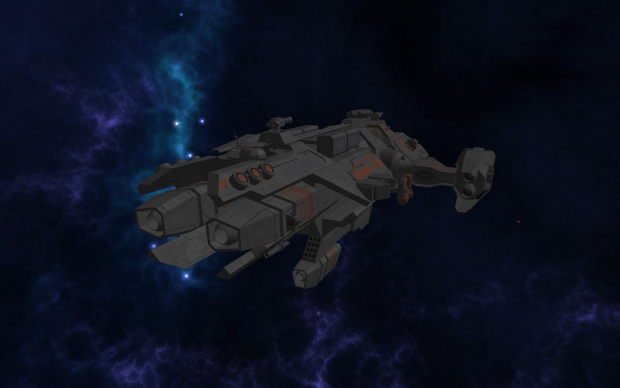 The concept for the Kite class is that it is a pit bull. It is relatively small but it can take a beating and punch above it's weight. It is heavily armoured and fairly well armed, but with a modest power output. To reach it's full damage potential other systems, like shields, will need to powered down. 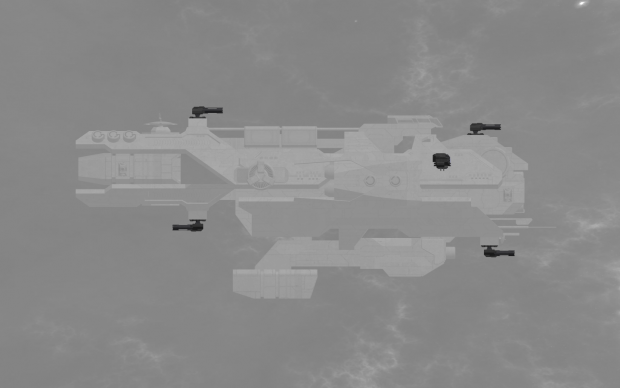 At this time my plan is to have limited customisation for the ships, mainly choosing which weapons are mounted on the ship's hardpoints. I would certainly like to implement a system for earning renown which could then be spent on outfitting your ship. Most likely this renown would be split between crew members, who could spend it to upgrade their own systems (tactical could fit new weapons to the hardpoints on the ship, engineering could upgrade the core or individual systems etc).

Click on any of the images above to get some more information on them (or browse them in the Images section).

As always, your input is very important to me. I am making this game for all of us. I would especially love to hear people's thoughts on the new Kite class ship.

I also want to say thank you to everyone for your support, it really means a lot to me.

Waw, that's great news, thanks for all that. Can't wait to get more now :D

Thank you for the support. :)

Awesome Faerdan!! Looking forward to seeing the how you progress the idea!